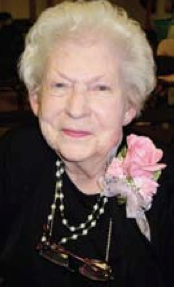 I first met my very good friend Abbie Teeter in San Francisco in the early 1970s, when she drove several of us to a weekend retreat of John the Baptist Charismatic Renewal Community. We shared many memorable experiences in those days. The JBCRC Saturday evening prayer meetings were so crowded that some of the people would usually be sitting on the floor, and after the meeting we’d go to someone’s home for Mass, and then stay up talking till the early morning hours.

In 1977 we both moved to South Bend to join the People of Praise. With over 100 others, we headed cross-country, leaving the people and places that we loved, discovering God’s new plan for us. Abbie made the covenant September 24, 1977, and in 1981 I purchased a home, later known as Shalom House, and invited Abbie and Luiza Freitas to move in with me.

We really enjoyed living together in our household. Abbie was an inspiration, because she had her personal prayer time around 5 a.m., before our 6 a.m. household prayer. She was always very practical and down to earth. She did my mending and I balanced her checking account, a win/win situation. I can only remember being upset with her once. She mentioned at a household meeting that our outside plants needed “dusting.” I thought that was taking cleanliness too far! Who cared if the plants outside were dusty? Then Abbie patiently explained to Luiza and me (city girls) that you put dust on plants to keep bugs away.

Abbie frequently spoke about her family, so in the early 1980s the two of us took Abbie’s car, with plenty of tapes on the Bible, and visited her family in California. That was a great trip, and we took several other vacations together. One Christmas we visited her son Jim and his family in California. One year we went to Branson, Missouri. One year we went to Phoenix to visit friends and then to Snowflake, AZ, where Abbie’s son Bill lived. She also traveled to Germany, Spain, the Holy Land, Rome and Guam.

Abbie was born June 19, 1917, on a homestead in Terry, Montana, and the Welliver family moved to Bismarck, North Dakota, when she was a child. She started work as a telephone operator after high school. Abbie and her husband Francis Teeter were married October 5, 1936. During World War II Francis served in the Army, so Abbie moved to the San Francisco Bay area, where her parents had relocated. Abbie and Francis raised six children in the Bay area before divorcing in 1971. She is survived by five children, 14 grandchildren and 19 great-grandchildren.

When Abbie moved to South Bend in 1977, she arrived with no prospect of a job, but her long experience working for Pacific Bell led to a position with Indiana Bell, and she worked there until her retirement. She was a union steward and held several management positions. The people she trained discovered that she wouldn’t settle for anything less than excellence, and they responded accordingly.

Abbie started the branch’s intercessory prayer vigil for widows and older single women. This was a monthly overnight vigil at the LaSalle Building to pray for the needs of the community and other needs we knew about. She always volunteered Shalom House to cook, so everybody would have a great main meal.

At a memorial luncheon at the branch center in South Bend on April 2, several of Abbie’s friends paid glowing tribute to her.

Gwen DeLee remembered, “For 11 months I accompanied Abbie on her visits for the St. Vincent De Paul Society. She was a great mentor. We visited the homes of the very, very poor, and I couldn’t get over how well she related to them. She amazed me. She was very direct, very realistic, and intent on helping them out in very practical ways. She had an immediate rapport with them. At that time Action division was developing programs to help people in society at large, beyond the People of Praise. Through Abbie, I saw that it was possible. We really could relate genuinely to people in dire need.”

In 1985, when Action division started Home Management Services (now Home Management Resources) to teach women the practical skills of running a home, Abbie was in the first group of counselors. In her HMS classes she taught sewing, cooking and crafts, and she was an excellent counselor one-on-one.

“Intercessory prayer was a passion for Abbie,” said Jackie Curran at the memorial service in the branch center. “She was a magnet for prayer intentions. She collected them from divisions, areas and all the branches, and kept them in a large box in alphabetical order. Sometimes our prayer vigil would take place on a football Saturday. Of course everybody knew Abbie absolutely loved Notre Dame football, but the prayer vigil was more important. So the game would be showing on the TV right up until the minute we began the vigil, then Abbie would click it off and we’d start singing “Spirit of the Living God.”

When she shared this, Jackie was wearing a jacket that Abbie had made for her. “When my son John said his first Mass in South Bend after ordination, Abbie made the chasuble he wore. For years, her scarves, table covers and Christmas decorations were the hottest items in the branch’s Christmas bazaar benefiting Trinity School.

“I was Abbie’s head when she was housebound because of health problems, so I asked her how I could serve her. She didn’t want things for herself. She wanted me to visit Ethel Chalk at Providence House, because Abbie herself couldn’t go. And she was very concerned that no one in Jo Geissler’s women’s group was able to visit her, so she asked me to go instead. (No matter that we were having a severe snowstorm!) I felt privileged to be an extension of this marvelous woman in Christ.”

Marylen Robinson recalled that Abbie taught the Girl Scouts in the branch to decorate Christmas cookies, as well as making their uniform vests for them. Terry Paukert said, “When I got married, I didn’t have a lot of money, so Abbie made my wedding dress.” Abbie’s generosity to the Trinity School scholarship fund enabled many students to attend who couldn’t have done so otherwise.

In June, 2006, she reluctantly left branch life in South Bend and moved back to California to live with her son Jim and his wife Mary Ellen, who cared for her lovingly until she died January 11, 2011, at the age of 93. Jim described his mother in a typical scene, sitting by the fireplace with grandkids everywhere, playing with their Star Wars toys. “Mom was grinning constantly the whole time the grandkids played there around her.”

Betsy Cotter reminded us all of one of the key characteristics of this woman of God: “Abbie gave. She always looked around for needs she could fill. Despite the difficulties she faced in her life, that familiar smile always returned quickly to her face. Today, when we walk into the branch center in South Bend, facing us on the opposite wall from the front door is a large picture of Jesus with a big smile on his face. That picture, also, is a gift from Abbie.”