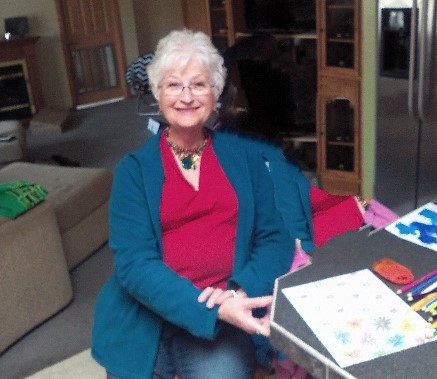 Deb moved to Minnesota after her marriage to Bob. They had met on a Caribbean cruise. Deb was traveling with friends, and Bob was with his daughter and son-in-law. Deb told Bob later that she knew she wanted to marry him because he prayed over her on the last day of the cruise.

Deb was ready to experience a new and deeper faith life. She joined the Catholic Church. She came underway in the People of Praise and looked forward to making the covenant. My husband Brad and I had the honor of giving her the Life in the Spirit Seminar in our home. It was such a blessing for us to pray with her for baptism in the Spirit and the gift of tongues. She wanted it all. She wanted to understand and to know what Jesus expected of her.

Deb was full of fun and lived life to the fullest. She loved meeting with her women’s group. She made jewelry and was a big fan of Texas hold’em—she played weekly and in tournaments.

She was also a courageous fighter. She had battled Hodgkin’s disease with chemo and radiation, and some 20 years later battled breast cancer and beat that too. Deb lived life in the moment, not in the past. She was kind, honest, determined, strong, courageous and loyal to family and friends.

Deb died peacefully in her home. As one of her caregivers, I saw that she always had a smile on her face, even when she was sleeping. She was absolutely ready for her new life with our risen Lord Jesus.

● Deb Taylor was born January 29, 1948, in Des Moines, Iowa, and died January 14, 2020, in Burnsville, Minnesota.
● She raised one son, and there are now three grandchildren.
● Deb was married July 26, 2014, to Bob O’Connell, a covenanted member of Servant Branch.
● She and Bob enjoyed traveling together. Their cruise to Alaska was one of her favorites.