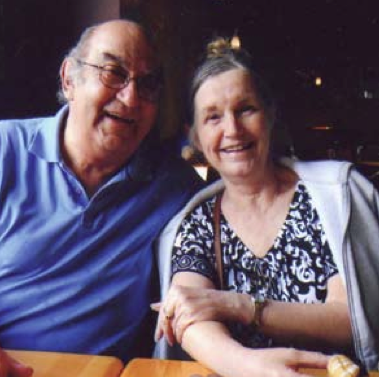 Elizabeth Cerrentano, better known to her family and friends as Betty, left us in the Rockford branch on October 16, 2010, at the age of 59. Her death seemed to come far too early, especially for those of us who had known and appreciated Betty's melodious laughter and had seen her unconditional love. If you were the happy recipient of Betty's kind of love, you would have known the wonderful experience of sitting down with her and recounting one of life’s trials, familiar to all, and then you and Betty would have both had a good laugh that lightened your load, every time.

Betty was born in Chicago on September 3, 1951. She and Len (Pudge) were married October 26, 1974, and together raised six children, Danny, Lonellen, Kris Ann, Kimberley, Jenny and Cindy. There are 16 grandchildren. She belonged to St. Peter Catholic Church in South Beloit, where for many years she served as the coordinator for the Adoration Chapel.

Pudge and Betty were among a group of about 100 people who attended a Life in the Spirit Seminar at the parish about 17 years ago. My husband Stu and I were asked to help pray with people to be baptized in the Holy Spirit, and we found ourselves praying with Pudge and Betty. It seemed like everything was happening to them in a rush. After not being involved in church for many years, they had just recently had their marriage blessed. Then within a very short time they were also baptized in the Holy Spirit, then started going to prayer meetings and then to community meetings. Their lives really changed a lot, and they just gulped it all down, because they were really hungry for God after those years away from the church. They came underway in the People of Praise, and made the covenant on March 30, 1996.

Pudge worked for many years in waste management, and the two of them also opened and operated a spiral-sliced ham store for several years. Soon to follow was Betty's avid and meticulous collection of costume jewelry, especially pieces in retro style. Betty went into all of her hobbies and business interests with an eye for the fine points. In fact, she was always making lists, so she could keep information organized and available. It seemed to be part of her character, getting interested in things down to the most specific details.

But nothing was ever so detailed as her research into how to live a provident and resourceful life, as described in the People of Praise teachings. She did an enormous amount of research and gathered information on many topics related to that: how long food can be preserved, how to store things in the basement, how many canned goods are needed to feed people for a week or a month, etc. Betty's research and her lists of high-quality information benefited all of us in the branch in preparing for any potential hard times ahead.

It was difficult for us in Betty's women's group when she began to miss our gatherings in the late fall of 2009 because of what seemed to be an infection. When it was determined in April, 2010, that she actually had bladder cancer, it seemed as if she would be seeing the Lord face to face sooner than we had expected. There wasn't a person who visited Betty who didn't get swept up into her excitement to see what God had in store for her in the next stage of her life in him. Pudge said that the last two days before she died it was as if the Lord had arranged her visitors to arrive according to a very peaceful and orderly schedule. For those necessarily short visits, people spontaneously arrived in twos, about 10 minutes apart, with such harmony that you would have thought Betty herself had orchestrated her goodbyes to us.

I went to visit her at home just before she died, and Betty was eager to take her next step toward the fullness of God’s love. She said, “This mortal body can’t handle all the love that’s coming at me. I just want to forgive everybody and have everybody forgive me if I’ve hurt them.”

Betty died knowing that she was truly loved by her family and friends, many of whom surrounded her in her final days. She wanted to thank everyone for every letter, prayer, thought and meal.

We'll all miss Betty and will forever remember the joy with which she looked forward to the embrace of the Lord.