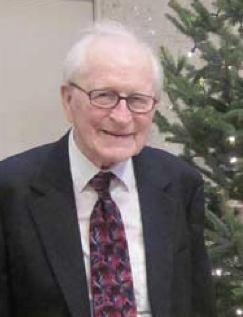 When we remember the long life of our covenanted brother Harold Roland (Servant Branch), who died December 28, 2010, at the age of 94, it’s crystal-clear that serving the Lord with joy was one of his mightiest gifts. Many of us have been long-term beneficiaries of his servant’s heart.

Harold was born in 1916 and raised in Minneapolis. With the exception of a short stint in the Aleutian Islands with the Army during World War II, he never ventured far from home. He graduated from North High School in 1935 but was unable to continue his education. During the bank failures in the ‘30s his parents had lost the money they were saving for his college tuition. Undeterred, Harold got himself a job at a freight warehouse and ran a crew unloading boxcars. He said, “For my age the pay was good, but I didn’t see any future in it for me.”

Through a friend, he found out that the interior decorator at Boutell Brothers furniture store was working many hours of overtime. Harold contacted him and offered to help. His boldness got him a job, along with expert tutoring in the new field of interior design. Via night classes and his boss’s mentoring, Harold quickly caught the vision of how to become a very successful interior designer. Eventually, Dayton’s department store hired him, and he retired from there in June, 1982.

Just before beginning his service in the Army, Harold was in the hospital because of complications from an appendectomy. A student nurse came to the door of his room and said hello. Her name was Dolores. They shared married life together beginning June 20, 1949, and raised four daughters: Kathy, Mary, Patricia and Joanne.

Harold and Dolores started attending Thursday night prayer meetings at Regina High School, and in 1975 joined Servants of the Light Community (which later became Servant Branch). They made the covenant of the People of Praise on January 27, 1985. Other family members in the community are their daughter Patricia Ficker and her husband Pat, and grandchildren Dan Ficker, Laura Ficker, Lisa Ficker and Catherine Ficker.

Harold and Dolores usually served their brothers and sisters together (with the possible exception of the many wedding cakes Dolores made). They worked in the bookstores at numerous charismatic prayer meetings and conferences, including the Notre Dame conferences and the Kansas City conference in 1977.  In 1982 (remember, this was the year Harold retired) they began managing the dinner theater presentations that the branch put on to entertain community members and guests, which had a total attendance of more than 5,000 over three and a half years. In 1989 they volunteered to manage one of the branch’s fundraising concession booths at the Metrodome. Until 1992 they worked all the home games for the Twins and the Vikings.

Both were long-time members of the Fellowship of the Holy Spirit team, and when the public meetings started they often invited guests. From 1993 to 1998, they were the volunteers in their area for the scrip program that benefits Trinity School at River Ridge. As a member of Most Holy Trinity Catholic Church, Harold asked to be healed of his fear of speaking in public so he could do Scripture readings at Mass. At his high-rise building he set up a Sunday Communion service for the residents, where he would give a short sharing. He said that thinking, praying and writing reflections kept him sharp.

Harold and Dolores’s daughter Mary compiled the pooled memories of her sisters and the rest of the family for a sharing at the funeral Mass. Here are some excerpts.

“From an early age, Dad lived according to his guiding principle of seeking God’s will in his life. When we would ask him about doing something (after his response in our childhood years of, ‘Go ask your mother’), his usual reply was, ‘I’ll pray about it and let you know what I believe God wants us to do.’

“Although dad was kind and loving throughout our lives, he developed a new relationship with God in his late 50s [when he was baptized in the Spirit] that changed his life. He felt God’s love and peace in his heart. . . . He chose to commit the rest of his life to learning about how to love himself and others with God’s love. He went from being a shy and reserved man to one who wanted to hug everyone.

“He saw that mom had been supporting him and our family while he worked day and night at his career. So his motto became, ‘Whatever Dolores wants, Dolores gets.’ He began a whole new habit of serving mom’s needs and desires. Fortunately, after he retired at 65, he had lots more time to support mom, all of us kids and grandkids. He began this focus when mom was still healthy, so he helped her go places and experience things she had always wanted to do. Later, this changed into his entire time being spent in loving care for her as she experiences the stages of Alzheimer’s disease.

“Fortunately for him, throughout all the years of his married life, he existed as a team with mom. In their enjoyment of each other and their mutual attention to detail, they functioned like a well-oiled machine. After his retirement—for most of these last 30 years—he and mom together continuously served the church, the community and those around them. It got to the point that I would have to get on their schedule to come over for dinner!

“Dad served because he felt this was the way he could express the love he felt in his heart. His heart’s desire was to help others know the love of God as he had come to know it.”

Harold turned 94 last December 1, and he spent a wonderful Christmas with his family. He drove himself to church on December 26, and went into the emergency room on the 27th, because he wasn’t feeling well. In the peace of Christ, he died with family members by his side on December 28.