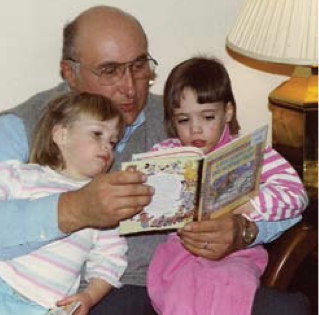 After a long battle with ill health and chronic pain, our brother Leonard Beskar (Servant Branch) died of congestive heart failure on October 4, 2010, a few weeks shy of his 76th birthday. Extended illness late in life had sapped the strength from a once rugged frame, but was unable to rob this good man of his faith, generosity and good humor.

Leonard was born on October 25, 1934, the third child of Leo and Mildred Beskar, who farmed in the Big River area of western Wisconsin. Leonard lost his mother to tuberculosis just 14 months into his life, and he and his two older siblings were sent to live with relatives, since his dad was unable to run the farm and care for small children at the same time. The family reunited four years later when his father remarried.

St. Mary's of Big River, a Catholic parish that serves the rural community of the area, played a significant role throughout Leonard's life. There he was baptized, confirmed and educated; there he served as an altar boy and later a member of the parish council, and there he was laid to rest in the little cemetery that sits beside the church.

Farming, too, played a key role. By the time he was seven or eight, Leonard was milking cows each day and working the fields each summer. He took up farming full-time after high school, working alongside his father, from whom he would later purchase the operation.

For several years, Leonard lived the life of a bachelor farmer. But one night in 1959 he escaped his chores long enough to attend a mixer for Catholic singles in St. Paul. There he laid eyes on Judy Kemp, a transplanted Iowa farm girl. What he didn't realize immediately was that his gaze had fallen on what was perhaps the only non-Catholic girl in attendance. Consequently, their courtship involved a serious exploration of their denominational differences. These discussions led to Judy's embrace of Catholicism and a trip to the altar. Their marriage was blessed with seven children, three of whom are members of Servant Branch: Dave Beskar, Cathy Miller and Theresa Krueger.

In 1974, life took a decisive turn for Leonard and Judy when they learned about charismatic renewal. Leonard was immediately drawn in, and was soon baptized in the Holy Spirit and attending prayer meetings in Hastings, Minnesota. A year or two later, the Beskars were in the first group from Wisconsin to join what was then known as Servants of the Light and is now Servant Branch. Life in a household followed in the late 1970s.

Throughout the 1980s, Leonard played a key pastoral role in area life, serving for a time as an area coordinator. The kindness of the man was evident to those he pastored. Jim Jacoby, for example, remembers his former head as a very good listener and one with whom he could discuss anything.

Leonard was well suited for family life and fatherhood. His daughter Mary Beth Brang recalls her father's tenderness and their capacity to communicate with few words. She recalls times riding into town with him, silently hoping for some special purchase. Leonard was too attentive to miss the unspoken request and too much of a softy to let it go unmet. About the time they were ready to leave the store, he'd say “Beth, go get it,” whatever “it” was.

All who knew Leonard were attracted to his good humor–how fond he was of a good joke, how easily moved to mirth. Often the latter got in the way of the former, the result of an inability to keep from breaking up long enough to finish the joke. The infectiousness of his laughter made up for the imperfect presentation, evoking a similar response from listeners who had never heard the punch line.

Leonard was also a terrific farmer. He was always eager to tackle new ideas and employ better methods. He was a very early adopter of practices to preserve the soil, such as contour farming to prevent runoff and crop rotation to mitigate soil depletion. He was also a wizard with a wrench, able to fix the most complex pieces of farm machinery.

The last quarter of Leonard's life was difficult, due to chronic pain triggered by prostate surgery. Since he was unable to attend community functions, branch visitors brought community life to him. On his better days, they encountered the old Leonard, a man eager to share a good joke, and always they found a kind and gentle man, one faithful in prayer for their needs and faithful to his Lord as well. Prayer and study filled his day. Chronic pain could not silence his praise of a Lord he knew to be good and steadfast, a fact noted in Mary Beth's eulogy, when she honored him for his fidelity to the lyrics of one of his favorite Christian songs:

El Shaddai, El Shaddai,
Erkamka na Adonai,
I will praise you till I die,
El Shaddai.