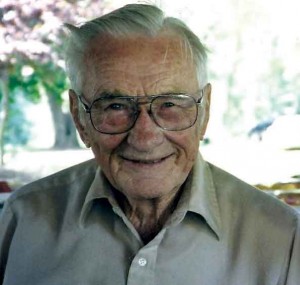 Leonard Kadera, a dear brother in Servant Branch who was full of curiosity and a profound sense of the bright fullness of life, died on January 5, 2010.

He was born in Iowa in 1913, one of six children. His early years growing up on a farm prepared him well for life, and also seemed to prepare him for a natural transition into Christian community life in Servant Branch years later. After being introduced by friends, he and Edith were married on June 4, 1940, and they enjoyed 68 years of life together, with 13 children, 60 grandchildren and 46 great-grandchildren. (Edith died from complications of pneumonia in August, 2008.)

Leonard and Edith started their family about the same time he started a TV repair business. As their family grew in size they moved to Minnesota, and Leonard started working with computers in St. Paul.

They were baptized in the Holy Spirit in the early 1970s and became active in a charismatic prayer group, through which they helped to bring many people to the Lord. Leonard’s daughter-in-law Gina Kadera says, “My husband Jim and I noticed the joy and peace that had entered their lives, and so we followed Leonard and Edith, being baptized in the Spirit ourselves in 1973. In 1976, we joined Servants of the Lord community in the Twin Cities area, and this time Leonard and Edith followed us, joining the community several years later.”

Life in Christian community was a perfect fit for Leonard and Edith. After retiring in the early 1980s, they moved from St. Paul to a rural area near Prescott, Wisconsin. This placed them in the East Area of Servant Branch. With that move, this friendly couple became a dear brother and sister to many in the East Area. Their retirement farm was the site of numerous area activities.

Ed Kaiser, as a young single man away from home, remembers the Kaderas opening up their home and inviting him to join their family for Thanksgiving dinner. Claudia Schmitz recalls Leonard and Edith’s loving and wise advice to her as she and her husband Tony were just starting out as new parents. Jerry and Patricia Rynda tell about the time when Leonard was helping them to wire their new house and Leonard actually did a pull-up to get into the attic. He was in his late 70s when he pulled that stunt!

For many years Leonard was very active in Scouting. He always seemed to know what would interest youngsters, especially boys. Once he invited a group of young East Area boys and dads out for an afternoon of adventure at the Kadera acreage in Wisconsin. Leonard enjoyed getting a bonfire blazing and roasting hot dogs. His eyes were especially bright as the boys “discovered” a drainage pipe just wide enough for them to crawl through.

Leonard and Edith were an example of provident and resourceful living. They built their retirement house to be very energy-efficient, and they always had a large garden planted in the summer. Brothers and sisters in the East Area were invited to stop out and pick some vegetables or fruit that was ripe. If that didn’t take care of the sometimes enormous Kadera surplus, Leonard would load up the extra produce in boxes and bring it to an area gathering or a men’s group meeting. He would have a huge smile and that familiar twinkle in his eye as folks took home what he called the “gifts from God’s country” that he brought to share.

Leonard was a faithful husband, father, grandfather, great-grandfather and brother in Christ. He and Edith were open-hearted and available to help anyone who needed them. As Edith’s health declined, Leonard cared for her with great love, patience and peace. They lived in a nursing home for the two years before her death, and after that Leonard continued to participate in as many branch activities as he could. He was a wonderful man who lived out well the verse that reminds us to “Rejoice in the Lord always.”