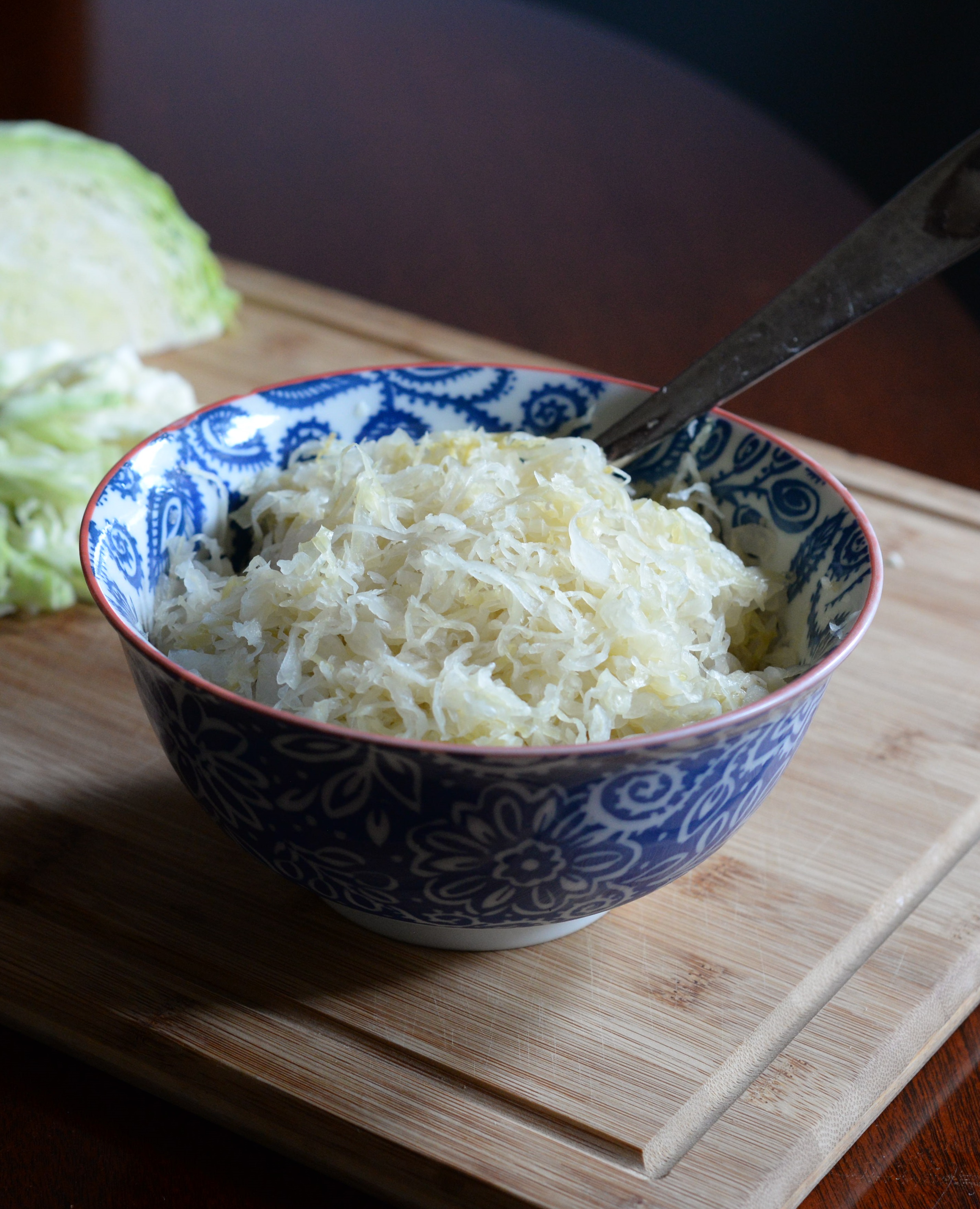 "What it takes is cabbage and elbow grease,” says Tom Voissem (Appleton), talking about his homemade sauerkraut. At 87 years old, Tom has been fermenting sauerkraut for decades, much the same way his German forebears did: chop, salt, stomp and wait.

“This is something his family’s been doing for generations,” says his wife Vida, who helps him make about 20 gallons of sauerkraut every fall, most of which they give away or share at Appleton branch gatherings (He is also known there for his spicy dill pickles.) Last spring, after Tom gave a batch to John and Amy Zwerneman (South Bend) while they were in town visiting, his sauerkraut made a splash at the community’s board of governors retreat. The Voissems use traditional kraut-making tools, but anyone with a knife, potato masher or wooden baseball bat and plastic pail can manage. 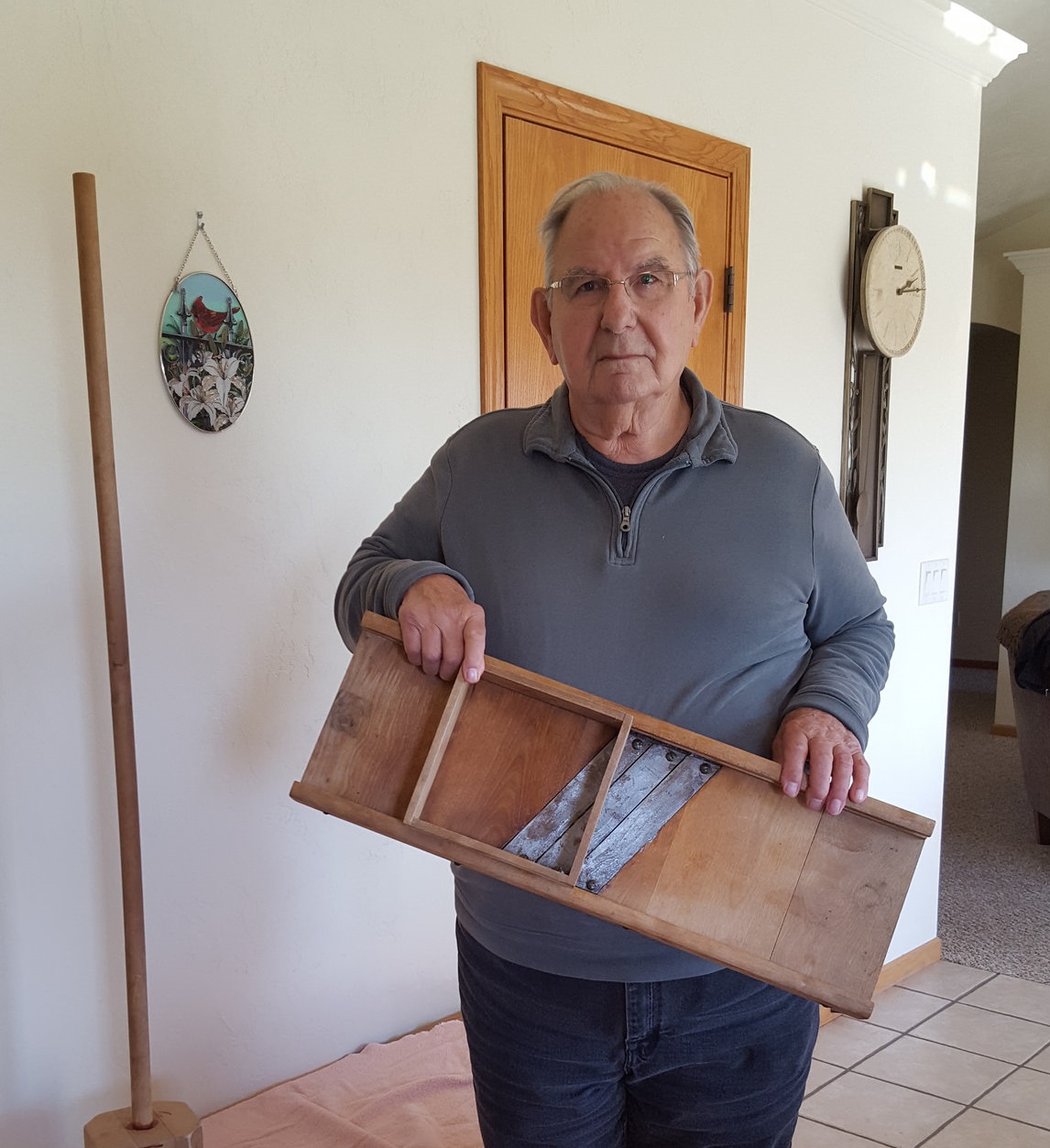 Tom’s wooden kraut cutter looks almost like an old-fashioned washing board, with a sliding frame that pushes the cabbage against stationary blades. “But you could use anything that cuts it thin,” Tom says.

Tom uses pickling salt. Do not use table salt, iodized salt or kosher salt, since those have additives that can inhibit fermentation. “We’ve been making it so many years. We just throw the salt in, and I take a taste. You can’t get too much salt, because you can always rinse it after it’s done.” 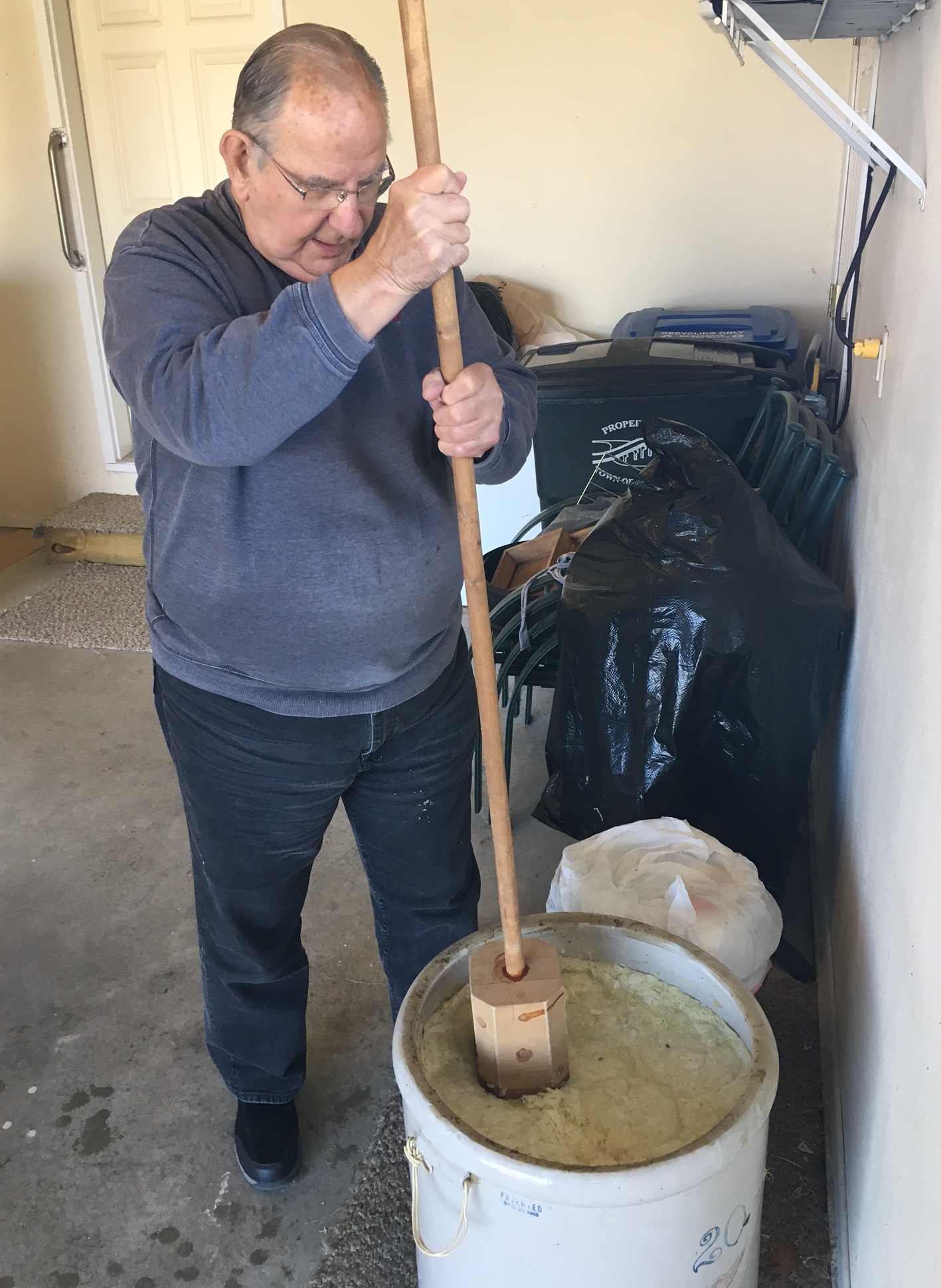 Tom explains that the old Germans actually used to stomp on the cabbage with rubber boots in big vats. He uses a stomper made out of maple wood, like a broom with a big block on the end, to press the cabbage down in his 20-gallon crock. The cabbage in a smaller batch can simply be compressed with a potato masher. This process releases the juices of the cabbage, which become the brine. Tom then presses the kraut down with a plate and weights down and seals the kraut inside the crock by putting a double garbage bag filled with water on top. 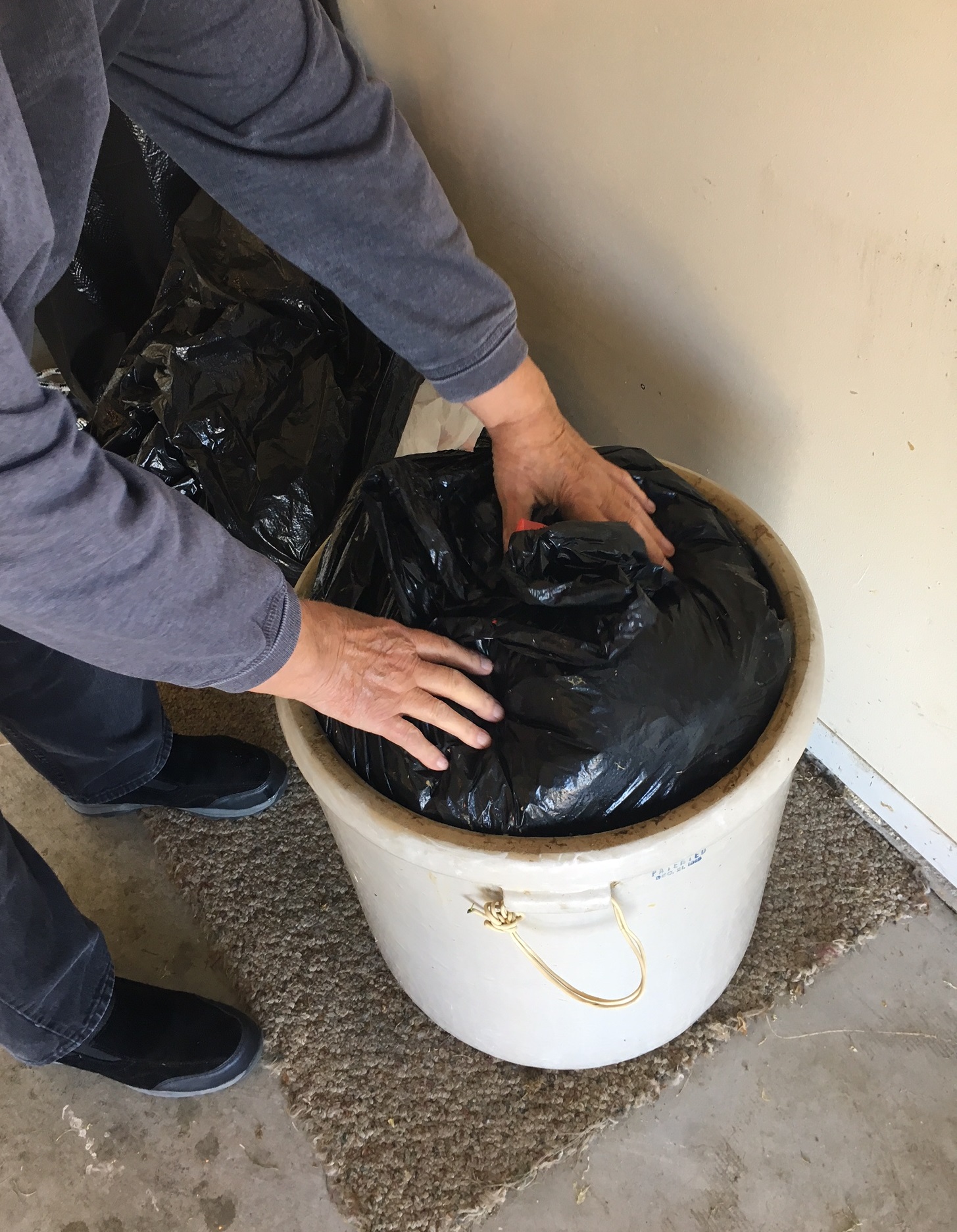 The Voissems ferment the kraut in their garage, where the air is cooler, and Tom takes some out to taste-test every so often after several weeks. It takes at least six weeks before he is satisfied with the flavor. The cabbage will look translucent at this point and there will be more liquid in the crock. Some people will can or jar their sauerkraut, but the Voissems simply store it in freezer bags. 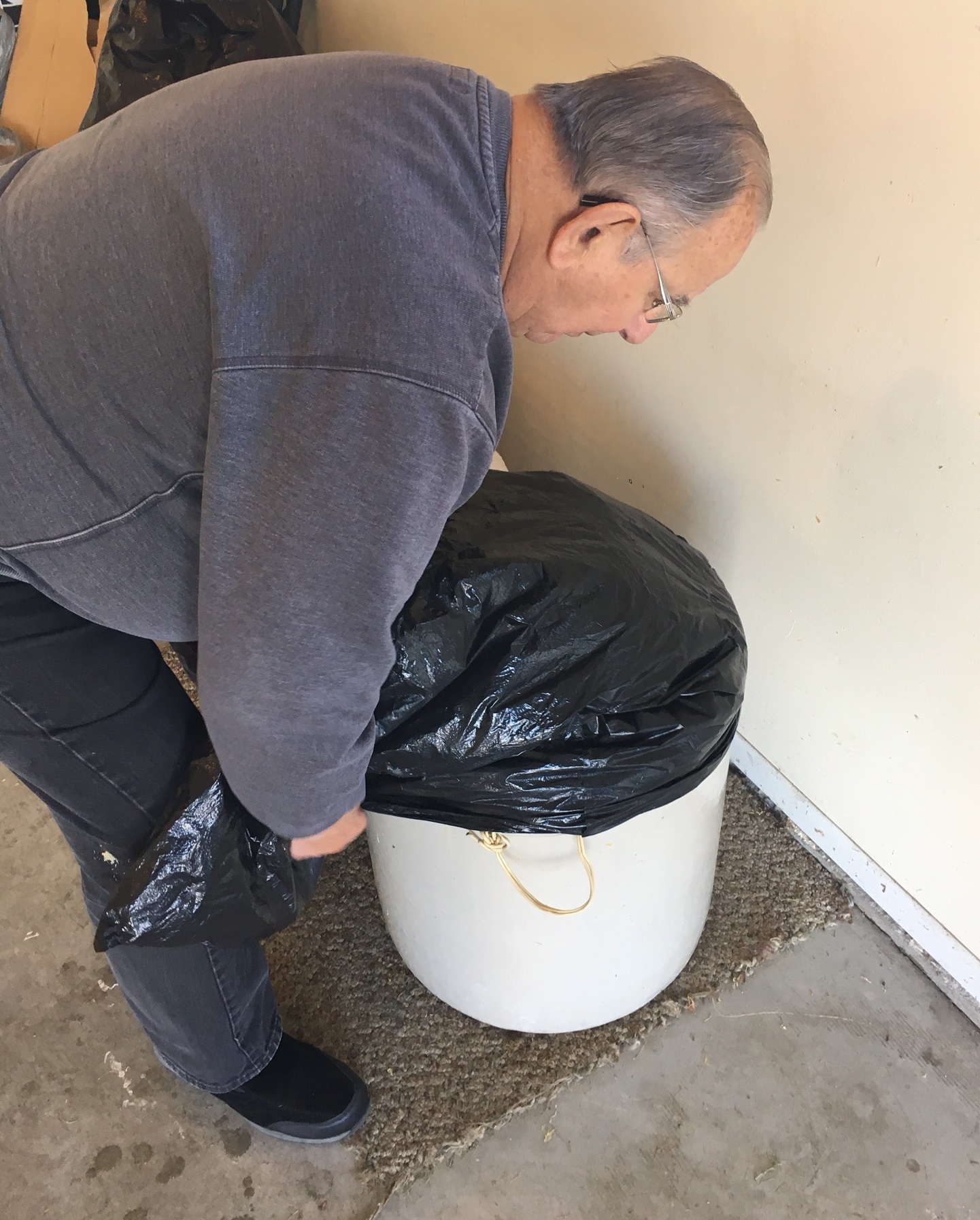 Jane Buch uses Tom’s method to make her own sauerkraut. “The first time you do it, it is a bit of an experiment. You learn every time. It doesn’t have to be quite as precise as a chemical experiment!”

Five pounds of cabbage
¼ cup pickling or canning salt
Kraut cutter (can use food processor or slice with knife)
3-to-5-gallon crock (can use plastic pail or enamel container—not metal)
Plate with diameter slightly smaller than crock opening (optional)
Stomper (can use potato masher or even a wooden baseball bat)
2 heavy-duty garbage bags, one inside the other to make a double-lined bag

1. Cut cabbage heads into quarters and removes cores. Shred cabbage into thin slices (about 1/16th inch thick) using a cutter of your choice.

2. Layer shredded cabbage in the crock; salt each layer.

3. Stomp or press cabbage until it becomes juicy. Add more of the cabbage and salt and repeat stomping process until all cabbage and salt have been added or the crock is ¾ full, whichever happens first. The mixture will be soupy on top.

5. Let sit in a cool place for several weeks. Warmer temperatures will increase the speed of fermentation, but too much warmth incurs a risk of mushy consistency or mold growth. The crock may retain moisture on the bottom, so take care where you set it.

6. Remove the weighted garbage bag and cover to check sauerkraut by taste. When sauerkraut reaches desired level of sourness—at least 4-6 weeks at about 60 degrees Fahrenheit—remove from crock and refrigerate or freeze.