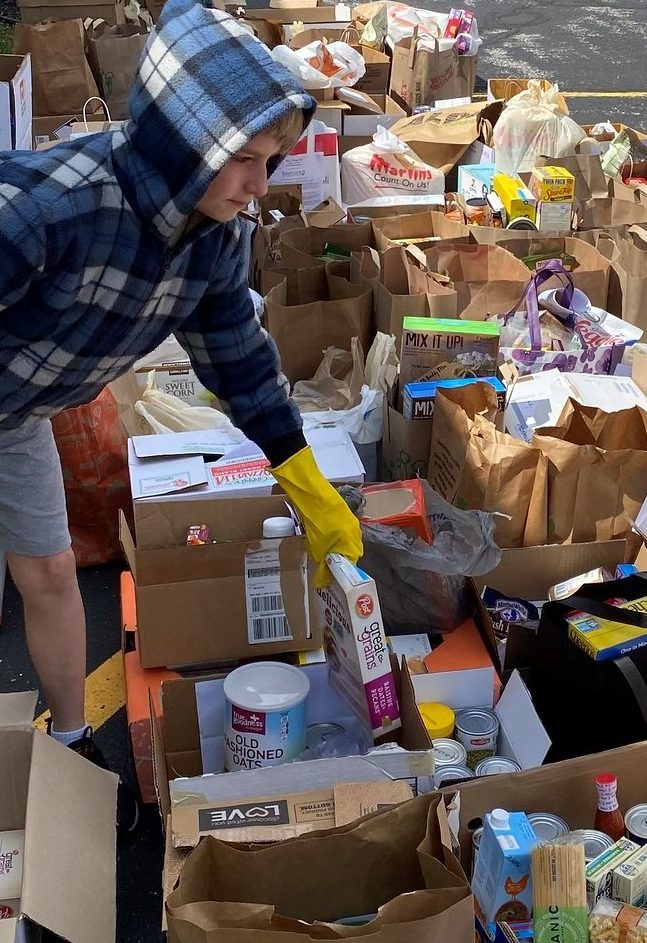 Larry Grauvogel (South Bend), a long-time leader in Boy Scout Troop 325, sponsored by the South Bend branch, recognizes an opportunity when he sees one.

A few weeks ago he noticed a flyer advertising a small neighborhood food drive. He made a phone call and found out that the Food Bank of Northern Indiana was 135,000 pounds shy of its goal.

The shortage was partially caused by the cancellation of annual nationwide food drives by the Boy Scouts and by US Postal Service mail carriers. He thought to himself: Our Boy Scouts should be able to do something about that.

After consulting with local Scout authorities, Larry sent out an email to the parents and boys of Troop 325, asking for volunteers to conduct a food drive in their own neighborhoods. They were quick to say yes.

“We got 18 different family units to cover 17 neighborhoods—that was a large area of the city. A total of 38 people—17 adults and 21 Scouts—participated,” Larry said.

Larry emailed an explanatory flyer for volunteer families to print and to distribute the Monday before Easter. With permission, they printed the food bank’s logo on the flyer, making it clear that they were directly serving the essential mission of the food bank. (According to Indiana guidelines, allowable essential activities include “activities needed for sustenance, necessities of life… and as necessary to take care of others while applying social distancing requirements.)

Scoutmaster John Loughran, his sons Peter (16) and Michael (14), and Josh Rose (15), dropped off flyers at 75 homes on Monday and gathered up food on Thursday. John recalls one funny moment as he went around looking for food packages on porches. He sent one son up to a house that had three bags of food on the porch, but he had second thoughts when he discovered the bags held fresh vegetables. John took the bags back to the house and found out the bags contained just-delivered food from a grocery store. “We all got a laugh out of that!”

Josh Heintzelman (13) and his brother Justin (12) went to several subdivisions with their mother Kristin and distributed over 100 flyers. Justin pointed out that they were careful not to put the flyers directly in mailboxes. They returned on Thursday, picked up the donations, and helped unload them at the branch center’s parking lot, where people organized, labeled and consolidated the food.

Scout Nick Kottkamp (16) distributed 48 flyers in his neighborhood on Monday, then on Thursday went around the neighborhood with his younger brother Peter (14), also a Scout, collecting the food packages off porches. “We wore gloves while picking up the food, and masks and gloves when unloading and reloading at the branch center,” he said.

Neighbors were eager to donate the food and were calling in to make sure their donation was picked up. Some attached notes to the packages thanking the Scouts for their service.

Results exceeded Larry’s expectations. “Altogether we collected 3,047 pounds of food (2,909 items) plus another $250 in cash for the food bank. The staff there was ecstatic when we brought it all over. The grandest donation I noticed was a container of Lysol disinfectant wipes. That has to be the hardest commodity to find during this coronavirus siege and perhaps worth its weight in gold.”

“You just never know how the Lord will move,” Larry says.