Couples from the Catholic Archdiocese of St. Paul and Minneapolis gathered October 21 for training as host couples in the new collaborative effort with Marriage in Christ.

It’s just about 6:00 on a Sunday evening, and Lou Giovannini, a deacon at St. Pius X Catholic Church in Granger, Indiana, is standing in a small hallway, shaking hands and giving hugs to departing churchgoers. With a stack of sign-up forms in one hand, he encourages men he knows to come on the parish’s next Marriage in Christ seminar. Already 86 couples from St. Pius have attended the seminar, including Lou and his wife Lori. “Before attending Marriage in Christ, I was used to praying for my wife,” he explains. “The seminar helped me to pray with her.” 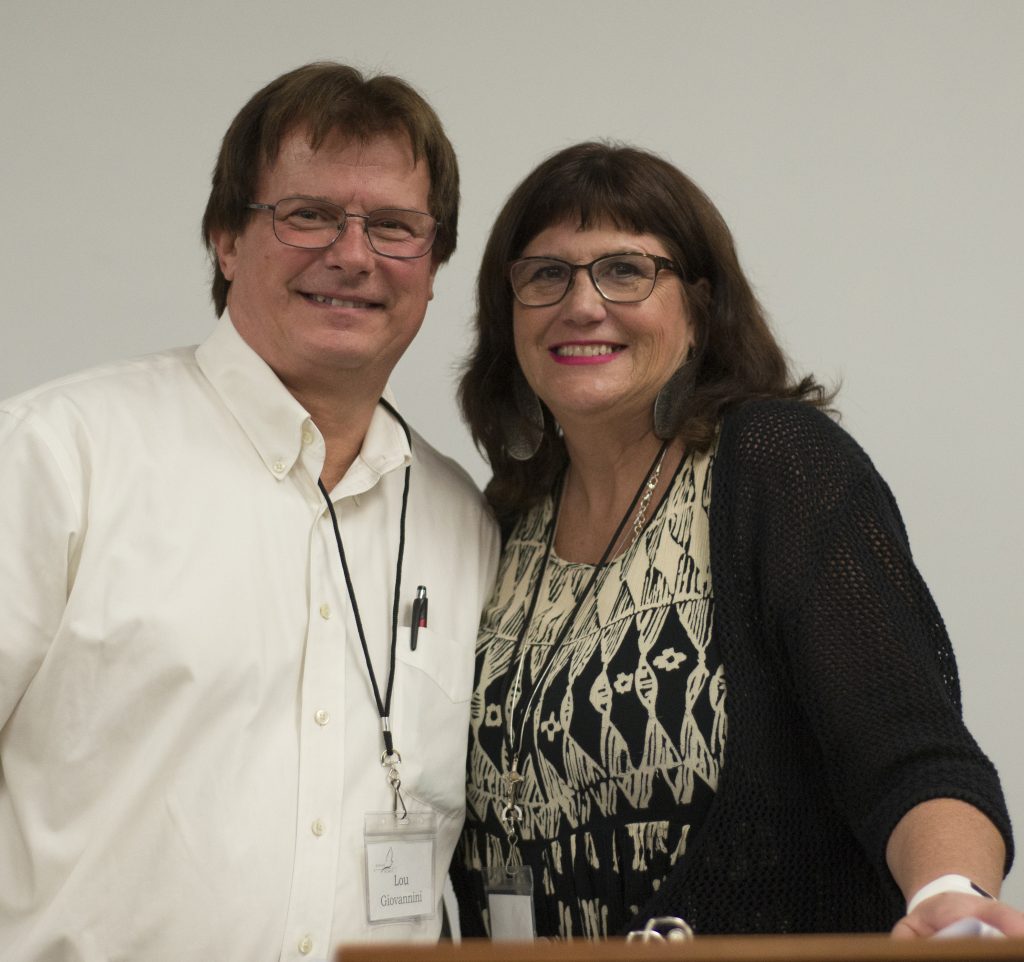 Lou and Lori Giovannini from St. Pius X Parish in Granger, IN.
At the back of churches like St. Pius, in homes and on the Internet, momentum for Marriage in Christ (MIC) is building. Sometime in November, couple number 1,000 will complete the five-week seminar, and 400 more couples are expected to be added to that number in the next two years, thanks to a new collaboration between MIC and the Catholic Archdiocese of St. Paul and Minneapolis. (The MIC seminar, a five-week program of video talks, discussions and prayer, was developed in Servant Branch in 2011, and the board of governors adopted it as a work of the People of Praise in 2013. The videos were produced by Greenlawn Films. It teaches couples practical skills for growing in friendship—forgiveness, prayer and conversation—all animated by the power of the Holy Spirit.)
The goal of the new collaboration is to bring Marriage in Christ to younger couples—newlyweds and those in the first five years of marriage—helping them to establish strong habits in the window of time between the wedding and the intense child-rearing years. To achieve this goal, MIC will train host couples in how to give the seminar in up to 20 parishes around the archdiocese. So far, 12 parishes have signed on. Host couple training is underway, with community couples Bob and Christine Brickweg, Pat and Patricia Ficker, Jim and Norma Cahill, Tad and Kim Bornhoft, Bill and Adella Wacker, and Ed and Phyllis Varevice serving as trainers. The first round of seminars will begin in January.
There is a financial component to the collaboration as well. Thanks to some generous donations, the cost for younger couples attending the seminar has been lowered from $85 to $25, or free, if necessary. MIC has hired a part-time staff member, Emily Hayden, a graduate of the seminar, who is helping to manage the effort and divides her time between the MIC office and the archdiocesan office. 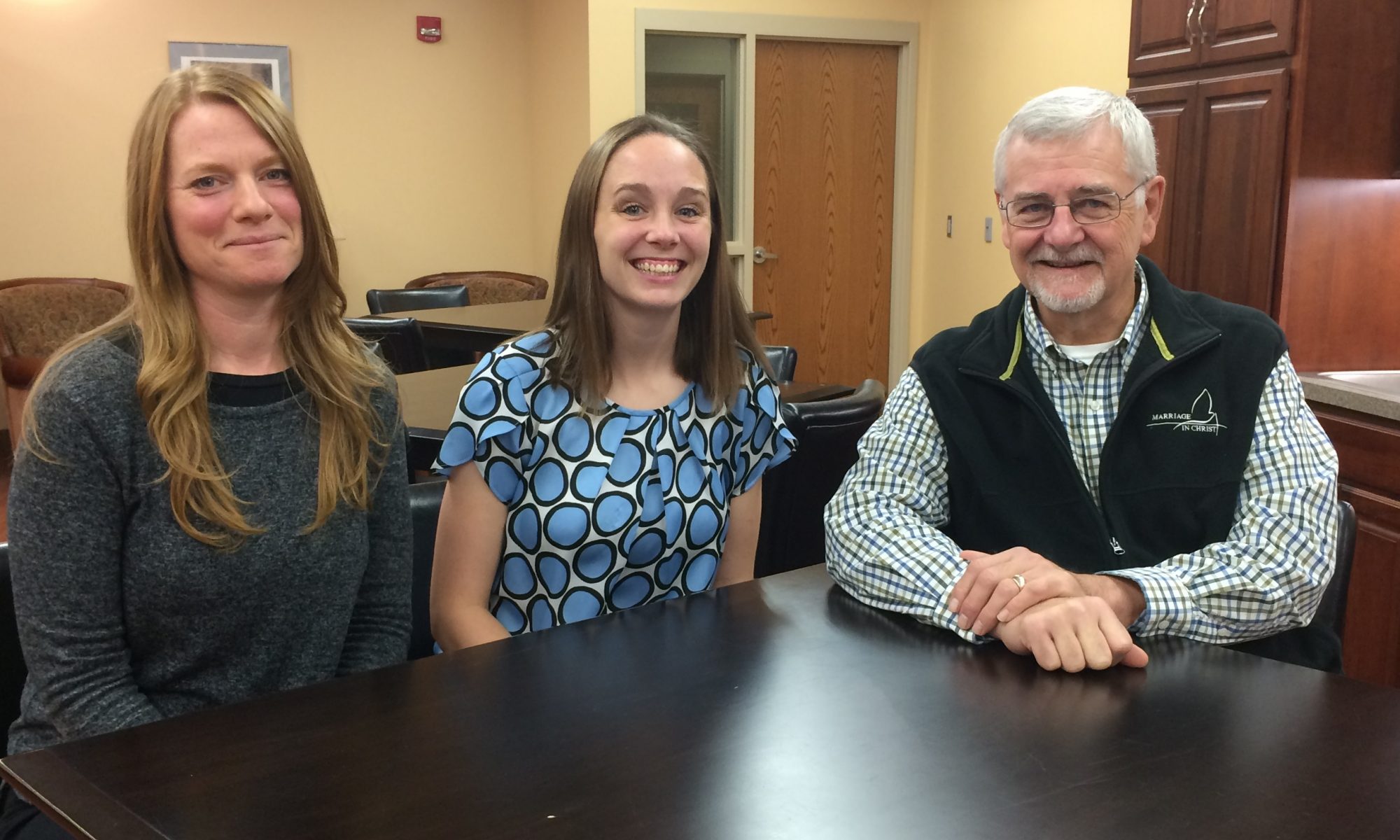 The staff of the Marriage in Christ office: Lucy Cunningham, Emily Hayden and Bill Wacker.
Archbishop Bernard Hebda wrote a letter introducing the collaboration, calling Marriage in Christ “a concrete way we can accompany young married couples beyond the wedding day.” He sees MIC as a way for the archdiocese to respond to the call of Pope Francis, who has been asking the Catholic Church to put more effort into strengthening marriages.
Bill Wacker, who directs Marriage in Christ, calls it “a gift to the church from the People of Praise,” and said he hopes the collaboration with the archdiocese will be a model that MIC can use to forge relationships with other dioceses and churches.
Progress with Marriage in Christ also continues around the community:
In New Orleans, Lloyd and Kathy Mehaffey and Tom and Diane Evans recently put on a seminar for leaders from two African American churches. Attendees included Bishop Otis Kenner, the pastor of Fresh Faith Worship Center and the author of several books, including a book on marriage. “My wife Tyra and I had been happily married for 22 years, but serving in ministry and pastoring all that time took its toll on my performance as a husband and father,” he said. “I needed to get myself back on track, and Marriage in Christ helped me to do that. We’ve requested the leaders’ training kit in order to be prepared to conduct a seminar ourselves in my church.” (You can find more of Bishop Kenner’s testimony here.)
In Hawaii, Tom and Mary Duddy and Don and Alana Busekrus have put on two seminars in 2017 at St. John Vianney Parish. After hearing the Busekruses speak at the end of mass, parishioners Mickey and Carol Surban took an interest in the seminar, but they were concerned about the cost of childcare for their six-year-old son. Then Don and Alana offered the services of their daughters as babysitters. “Marriage in Christ was a game-changer for us,” Mickey said, “especially the talk on forgiveness. We treat each other with more respect and thoughtfulness. We’ve established a consistent home prayer life together.” The Surbans went on to share their own testimony after mass, urging others to attend the seminar.
Stephen Laudise, a retired pastor at Hope Chapel, affiliated with the International Church of the Foursquare Gospel, also attended one of the Hawaii seminars with his wife, Dawn. “I have been through or put on many programs for marriage enrichment, and Marriage in Christ was as good or better than any other. I especially appreciated the openness to the Holy Spirit, and the questions and prayers provided were beautiful. We hope to help out with future seminars and invite some of our friends,” he said. 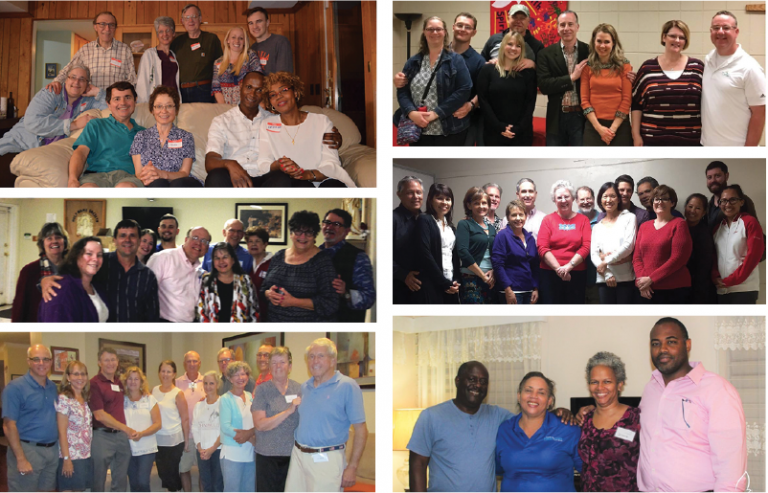 A sampling of photos from a few of the many Marriage in Christ seminars that have been held in the US and Jamaica. Locations are: Top row, from left: northern Virginia; Rockford. Second row: New Orleans; Kailua, HI. Bottom row: Woodstock, MD; Kingston; Kennewick, WA.

Marriage in Christ has taken hold in several places where the community has branches, but Bill wants it to spread everywhere. “Our biggest challenge is getting started in places where there is no branch, getting a core group of people that understand and experience life as we do,” he said. God is opening some doors. Lucy Cunningham, the Marriage in Christ program manager, points to an article about Marriage in Christ by Bob and Christine Brickweg in The Word Among Us magazine that led a couple from Australia to contact the MIC office. Now they are going through the host couple training. Julie Conroy (northern Virginia) told her brother in Vermont about MIC, and now he and his wife have been trained. This training can take place via phone or Skype, so there’s no need for couples to travel to Minnesota.

Julie and her husband John have made their own commitment to spread Marriage in Christ. They’ve hosted two seminars in their home, where, as Julie says, the atmosphere is cozier than it can be in a chilly church basement. One of the couples on their most recent seminar came to them through the Brickwegs’ magazine article.
Like so many others working to spread Marriage in Christ, the Conroys are MIC graduates. “My husband John and I thought hosting seminars was something we could work on together to help people, but we realized it was good for us too. We’ve been getting up earlier to pray together rather than leaving it to the end of the day.
“We plan on running Marriage in Christ seminars until we run out of people!” 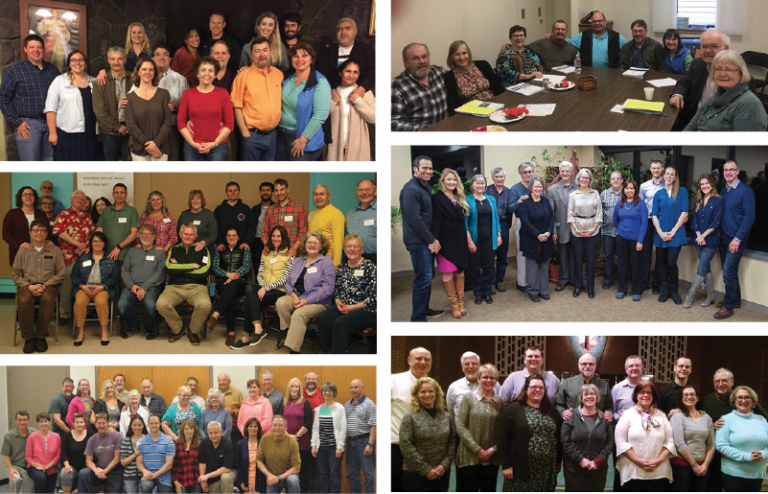 A sampling of photos from a few of the many Marriage in Christ seminars that have been held in the US and Jamaica. Locations are: Top row, from left: Lebanon, OR; Shieldsville, MN. Second row: Portland; Eagan, MN. Bottom row: South Bend