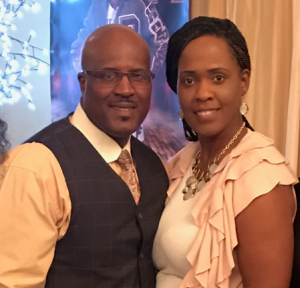 Photo: Courtesy of Bishop Otis Kenner
For Rev. Otis Kenner, pastor of Fresh Faith Worship Center, presiding bishop of Kingdom Growth Fellowship of United Churches in New Orleans and vice-president of River Regions Theological College, Marriage in Christ has not only been helpful in his marriage but also a source of racial reconciliation as well.

I had been serving a national pro-life organization as a liaison to African Americans, often as a sidewalk counselor, trying to rescue those unjustly sentenced to death. My duties also involved traveling around the country speaking at national conferences, seeking to wake up African-American pastors to the disproportionate numbers of black children being killed. After some time in that position events convinced me that I was the group’s token black person–admittedly anointed by the Holy Spirit, but useful only because of my race. It came to a climax when I experienced what I took to be a moment of socially acceptable racism at a conference in Kansas.
I couldn’t take it anymore, and feeling betrayed by white people in general I left the group in anger and disgust. I’d had enough of white people. I remembered the time years before when a burning cross had been placed in the lawn of my family’s home. I had two uncles who were murdered by the KKK. The house in which my wife and I lived had been vandalized three times and the police did not act against the known culprits. I had endured 40 years of racism in the world, but this incident of racism was in the church, for goodness sake!
I only bothered to get to know Lloyd Mehaffey (New Orleans) because mutual friends, fellow pastors, introduced us. Lloyd invited me and my wife Tyra to a MIC seminar, where we met his wife Kathy and Tom and Diane Evans. The kindness and dignity with which they treated us totally eradicated the pain I had been experiencing. Their words and actions demonstrated that they understood how awful some of our experiences had been. We shared bread and passed the cup. Relating to the four of them has been a healing experience. We’re looking forward to working with them on bringing the Marriage in Christ program to many in the African-American community.