People of Praise: Hard to Understand and That’s OK 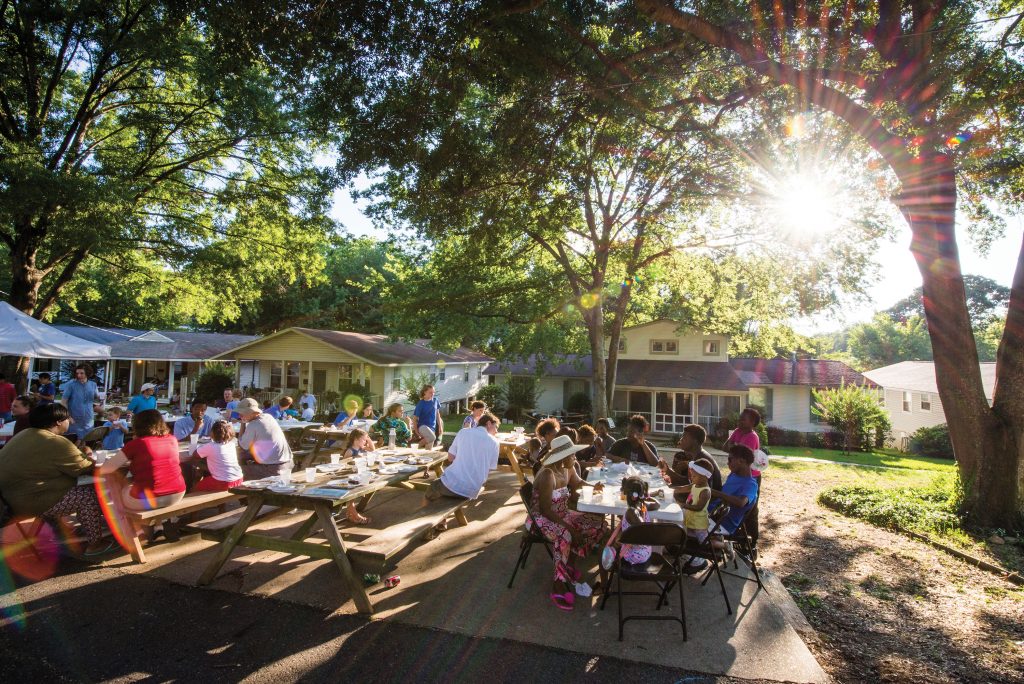 A People of Praise community barbecue in Shreveport, Louisiana.

Click here to see our response to the most recent press attention we have been receiving.

Ms. Dorothy Anderson is an African American woman in her mid-seventies and a long-time resident of Shreveport, Louisiana. Recently, she found herself deeply moved at a neighborhood barbecue hosted by the People of Praise community.

“In almost all of his speeches, Martin Luther King spoke about blacks and whites living together in unity,” Ms. Anderson said. “I didn’t think I’d live long enough to see it, but I saw it last Thursday night at the barbecue.”

Her words resonated, particularly since residents of her neighborhood had long suffered under the scourge of racism, and Dr. King himself had spoken twice at the Galilee Baptist Church just a few blocks away.

For the People of Praise, Ms. Anderson’s words strike an even deeper chord.

Recently, our community was subject to scrutiny in the mainstream press, to reports that contained both inaccuracies and misunderstandings.

We want to respond and explain who we are, but in doing so we would not want our own words to fall short of the high standard Jesus sets forth in the Sermon on the Mount. We forgive those who have wronged us and we pray for them.

Who are the People of Praise?

We are an ecumenical, charismatic, covenant community. Our model and inspiration is the first Christian community, a small band of disciples who “were of one heart and soul” and “held all things in common.” (Acts 4:33, 2:44). We can be difficult for the public and the press to understand. In truth, we are a community that defies categories.

Take our ecumenism. A majority of People of Praise members are Catholic, and yet the People of Praise is not a Catholic group. We aim to be a witness to the unity Jesus desires for all his followers. Our membership includes not only Catholics but Lutherans, Anglicans, Methodists, Pentecostals and nondenominational Christians. What we share is a common baptism, a commitment to love one another and our teachings, which we hold in common.

Defying categories is not necessarily a disadvantage. Our members include teachers, carpenters and cooks, security guards and judges, laity and ordained clergy, singles and married couples. We are a community for the rich and we are a community for the poor. We strive to be one of those rare places in 21st-century life where men and women with a wide variety of political and religious views can live together in harmony.

In recent years, the People of Praise is perhaps best known as the founder of Trinity Schools, three junior high/high schools, which between them have won eight Blue Ribbon awards from the U.S. Department of Education. For more than 35 years our schools have had a reputation for encouraging students to ask questions, engage in spirited dialogue and draw their own reasoned conclusions. “I know of no better school in these United States,” the late political philosopher Russell Kirk said of our flagship school in South Bend, IN.

Then there is our missionary work. Over the past 15 years the People of Praise has sent more than 100 people to live in some of America’s forgotten corners—places like Ms. Anderson’s Shreveport neighborhood, where the per capita income is under $14,000. There, we and our neighbors have built and renovated homes, run summer camps for thousands and started an elementary school for our neighborhood, Praise Academy at Lakeside.

In Evansville, IN, a group of People of Praise missionaries moved into two houses at a notorious intersection, a place locals called “the devil’s corner” because of all the fights and drug deals. We didn’t arrive with any program or magic formula, but hoped to encounter neighbors in a spirit of Christian friendship. Even so, our neighbors have told us that crime has dropped off significantly because of the community we and they are building. “Every night there would be something bad going on and the police would have to park and just watch everybody,” one long-time Evansville resident said. “It’s just remarkable how things have changed.”

On another front, our community life provides a natural support for marriages and families, and this has led us to develop Marriage in Christ, a five-week course that equips couples to pray together and build crucial habits of conversation. More than 1,000 couples have completed the program.

The People of Praise has some of its roots in the Pentecostal revival that grew from a group of poor African Americans in Los Angeles, beginning in 1906. Those humble believers experienced a tremendous outpouring of the Holy Spirit and a renewal of spiritual gifts like speaking in tongues. They were ridiculed in the press, called “fanatics” and mocked for their lively worship. But the revival went on to inspire half a billion people, including millions of Roman Catholics.

The People of Praise also has roots in the Cursillo, an evangelistic movement founded in Spain by Catholic laymen in the 1940s, which spread to Mexico and the United States, influencing some of our founding members. In 1971, after nearly seven years spent praying and studying the Bible and the teachings of the Church Fathers, 29 people made a covenant commitment to put their lives and their futures in common. The People of Praise was born.

Two of our founding members, Kevin and Dorothy Ranaghan, played a pivotal role spreading the Pentecostal revival among Catholics, where it became known as “charismatic renewal.” The People of Praise ran many large conferences, including the 1977 conference in Kansas City’s Arrowhead stadium that was perhaps the largest ecumenical gathering in modern times. Cardinal Leo Suenens, one of the Second Vatican Council’s leading voices, spoke to the crowd of 50,000, as did Bishop Ithiel Clemmons of the Church of God in Christ. This grassroots ecumenism has continued under Pope Francis, who last year invited all charismatics to Rome, where he joined them in prayer and song to celebrate with Catholics, Protestants and Pentecostals, the 50th anniversary of the charismatic renewal in the Catholic Church.

Another Francis, the late Cardinal Francis George of Chicago, helped the Brotherhood of the People of Praise, a group of men who live lives of dedicated celibacy, to obtain official status as a private association of the faithful. For years some of the men in the Brotherhood had felt a call to become Catholic priests, creating a complicated situation, given that some of their brothers might be Lutheran or Pentecostal. Cardinal George championed their cause. “In my acquaintance with the People of Praise,” the cardinal wrote, “I have found men and women dedicated to God and eager to seek and do His divine will. They are shaped by love of Holy Scripture, prayer and community; and the Church’s mission is richer for their presence.”

After a long period of prayer and discernment, many People of Praise members choose to make a lifelong commitment called a covenant. The covenant of the People of Praise is a promise of love and service to fellow community members and to God. This covenant is not an oath or a vow. We have understood that God can always call a person to another way of life, in which case he or she would be released from the covenant.

People of Praise members agree to accept practical advice and spiritual direction from other qualified community members, a practice which has puzzled some observers since the vast majority of our members are not ordained clergy. Pope Francis himself addressed this issue in 2015, stating, “Spiritual direction is not an exclusive charism of the presbyters: it is a charism of the laity!” He cited a long tradition of lay spiritual direction going back to the early monastic era. In keeping with this tradition, the People of Praise uses the Spiritual Exercises of St. Ignatius as a basis for counsel and discernment. Two of our members recently published a book on the Spiritual Exercises called Burning with Love for God.

Freedom of conscience is a key to our diversity. People of Praise members are always free to follow their consciences, as formed by the light of reason, experience and the teachings of their churches.

We may not always be easy to understand, but that’s OK with us. We would never want to trade our birthright for positive attention or compromise the very qualities which are our only God-given advantage. Imperfect words will eventually fade, but we remain happy and proud to be the category-defying community God has called us to be, his People of Praise.

Sean Connolly (@sconnoll) is the communications director for the People of Praise community.