The People of Praise Responds to Recent Press 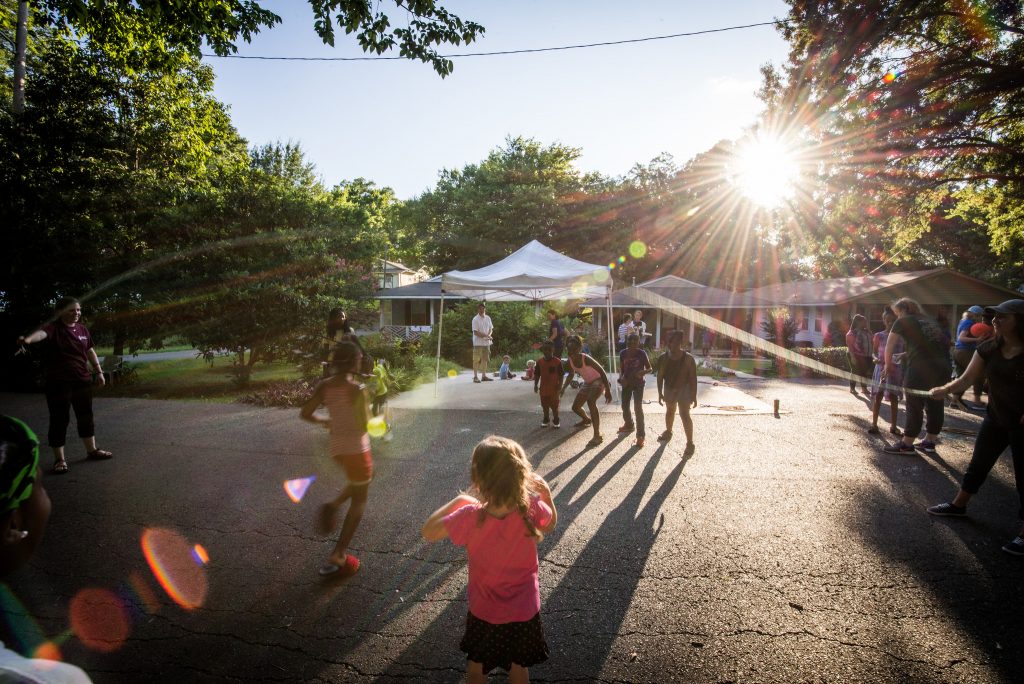 Children play at a People of Praise block party in Shreveport. (Photo by Andy Bowar)

Over the past few weeks the People of Praise has received a great deal of attention in the press. With this document, we aim to correct the record and provide clarity on a few important points.

The Covenant of the People of Praise

After a multi-year period of prayer and discernment, many People of Praise members choose to make a permanent commitment called a covenant. The covenant of the People of Praise is a promise of love and service we choose to make to one another. The covenant is not an oath or a vow. (Despite what has been reported in the press, over our 47-year history, we have never publicly or privately described the covenant as an oath or a vow.) Our covenant is a commitment to be there for one another for the long run, to support one another through thick and thin, through all of life's seasons. Of course, we understand that God can always call a person to another way of life.

While a majority of People of Praise members are Catholic, the People of Praise is not a Catholic group. Our membership includes not only Catholics, but Lutherans, Anglicans, Methodists, Pentecostals and nondenominational Christians, among others. We aim to be a witness to the unity Jesus desires for all his followers. What we share is a common baptism, a commitment to love one another and our experience of the baptism in the Holy Spirit.

Each person in the People of Praise has another qualified community member from whom they can receive practical and spiritual advice and encouragement.  This trusted confidant is called a head. Particularly with newer members, heads also act as guides in how we live together in Christian community. This practice has puzzled some observers since the vast majority of our members are not ordained clergy. Pope Francis himself addressed this issue in 2015, stating, “Spiritual direction is not an exclusive charism of the presbyters: it is a charism of the laity!” He cited a long tradition of lay spiritual direction going back to the early monastic era. In keeping with this tradition, the People of Praise uses the Spiritual Exercises of St. Ignatius as a basis for counsel and discernment. Heads do not make decisions for others, but are there to help each person to discern freely what they should do in the Lord.

Spiritual direction is a time-honored practice among Catholics. Many Protestants also have a history of entering into agreements with their religious communities. While always honoring individual freedom and conscience, Christians hold each other accountable through commitments they make to small groups, prayer partners, interdenominational faith-based organizations and churches.

People of Praise members are always free to follow their consciences, as formed by the light of reason, experience and the teachings of their churches. Each person is responsible for his or her own decisions.

The People of Praise has both men and women leaders. For many years, we referred to some of our women leaders as handmaids, following the use of the term by Mary, Jesus’s mother, who called herself “the handmaid of the Lord,” (Lk. 1:38). Mary is honored by millions as the first Christian and as a model believer. In keeping with this, the term handmaid originally honored a woman with an important relationship with God and a leadership role within our community. Recognizing that the meaning of this term has shifted dramatically in our culture in recent years, we no longer use the term handmaid to describe those women who are leaders in the People of Praise.

Politics and the Sanctity of Life

The People of Praise does not take positions on political matters, legislation, or constitutional interpretation. We subscribe to the position of the Roman Catholic church and many Protestant churches, namely, we respect the sanctity of human life from conception to natural death.

The People of Praise includes political liberals and conservatives, Republicans, Democrats and independents. We strive to be one of those rare places in 21st-century life where men and women with a wide variety of political and religious views can live together in harmony.

Joe Zakas, who has served as a state senator in Indiana for 36 years, offered the following statement:

“I joined the People of Praise in 1972. I was first elected to the Indiana State Senate in 1982. In all my years as a legislator, I was never directed in any way as to any vote or public policy issue. Taking personal responsibility for decisions and actions was the bottom line.”

The People of Praise recognizes that men and women share a fundamental equality as bearers of God’s image and sons of God in Christ.  “[Y]ou are all sons of God through faith, for all of you were baptized into Christ have clothed yourself with Christ. There is neither Jew nor Gentile, neither slave nor free, nor is there male and female, for you are all one in Christ Jesus” (Galatians 3:26-28).

We also take seriously the teaching of the New Testament that husbands and wives should love one another and lay down their lives out of love for one another and their families (Jn. 15:13).

Husbands should not be domineering nor should wives be servile. No member of the People of Praise should be either domineering or servile in their relationships with other people. Leadership should always be for the benefit of others, as Jesus showed, and marriages should be marked by mutual love and cooperation between spouses. Of course, every individual should always act in personal freedom and with responsibility, including within marriages.

Each married couple is unique and distinctive, so how this works out in the husband-wife relationship will be different for each couple.

Within the community we find a natural support for marriages and families. Many community children grow up as close friends, and their mothers and fathers find friendship, encouragement and insight from other community members. Marriages in the community have an incredibly low divorce rate.

“In my acquaintance with the People of Praise, I have found men and women dedicated to God and eager to seek and do His divine will. They are shaped by love of Holy Scripture, prayer and community; and the Church’s mission is richer for their presence.”

“The first thing you see on the People of Praise website is a Louisiana picnic attended by a notably inter-racial group. One might have thought that such membership groups are far too rare — especially in the current climate. . . . Considering their charitable work and trans-racial, trans-class appeal, they deserve at least the benefit of the doubt. ”

“Through my interactions over the years, I’ve found that these are lovely, earnest people who want to build an intentional community for the purpose of loving and serving others…”

“What I see in practice is people who take their Christian faith and their intention to share life with others seriously. There is a tremendous ethic of serving and caring for others. Someone who loses a job, or gets sick, members are there, that’s what it looks like to me as someone who is looking from outside.”

“My People of Praise affiliation was very clear in my consideration for appointment as bishop, so the Holy Father Pope Francis appointed me bishop, knowing full well my involvement with People of Praise.”