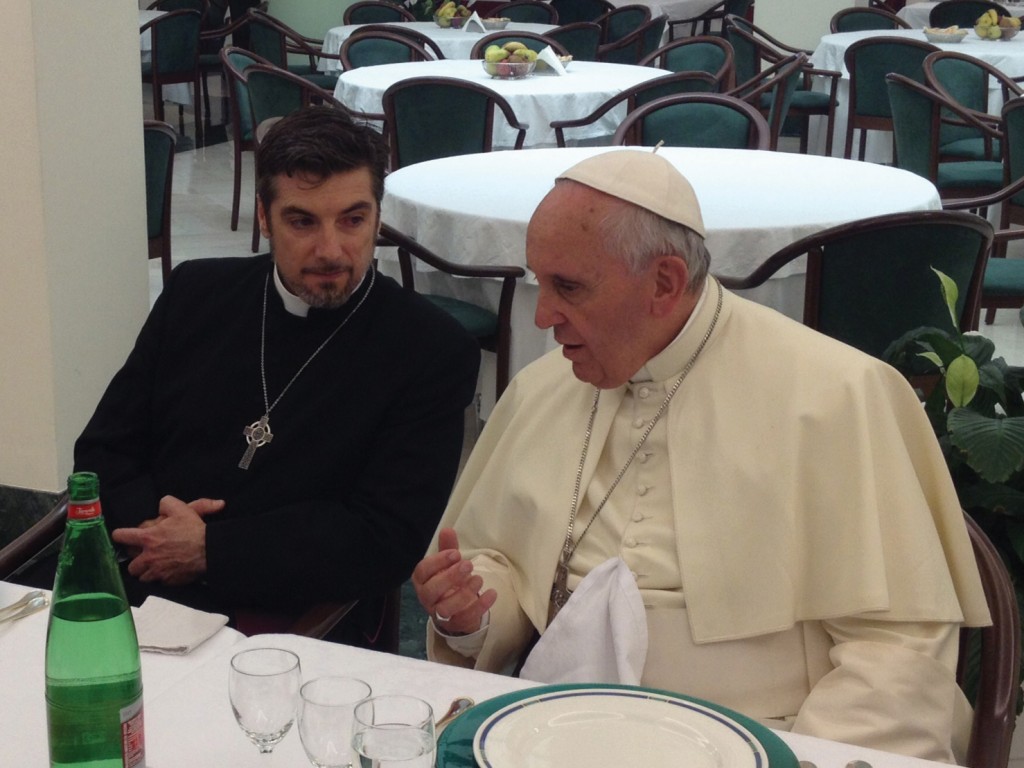 It all started with an iPhone.

On January 14, 2014, Tony Palmer, a charismatic bishop from a little-known Anglican communion, used his phone to shoot a video of a friend—Pope Francis, leader of the world’s 1.2 billion Catholics. In the video, Francis opened his heart to a group of Pentecostal leaders affiliated with Kenneth Copeland’s ministry.

“I am speaking to you as a brother,” Francis told them. “Let us allow our yearning to grow, because that will allow us find each other, to embrace one another, and together to worship Jesus Christ as the only Lord of history.”

He added: “the miracle of unity has begun.”

This is the story of that miracle. Its threads cut through the spiritual divides that separate mainline Protestants, Catholics and Pentecostals. But in tracing them, the main protagonist is the Holy Spirit, which means that anything could happen.

The week after recording the video, Bishop Palmer traveled to Texas to introduce Francis’s greeting to the Pentecostals. He was uniquely positioned to do so. Palmer had given his life to Jesus in a Pentecostal church in South Africa. He was married to an Italian Catholic. He had become an Anglican priest and bishop, and he had adopted a Catholic Cardinal from Buenos Aires named Jorge Mario Bergoglio (later Pope Francis) as one of his spiritual fathers.

In a fiery speech that set the stage, Palmer read from the 1999 Lutheran-Catholic “Joint Declaration on the Doctrine of Justification.” In that document the two confessions declared that they share a common understanding of the basis for salvation—and therefore that the central theological disagreement of the Reformation had been resolved. As Palmer put it: “The protest is over.”

Methodists had joined Lutherans and Catholics in signing the declaration in 2006, yet millions of Christians had never heard of the declaration and so were living their lives as if the protest was still in force. But Palmer didn’t dwell on the past. He had come to the conference to play the role of John the Baptist, of a prophet burning to announce something greater that was yet to come. “We are living in an incredibly important generation,” he declared.

After watching the pope’s greeting on a giant screen, the Pentecostal leaders rose to their feet. They prayed for Francis enthusiastically, with their hands raised, in tongues and in the Spirit. “My dear sir,” Kenneth Copeland said. “Thank you so, from the bottom of our hearts.”

Francis’s greeting was not supposed to become public, but the month after the conference in Texas, someone posted video from the conference on YouTube. “It went wild,” Palmer’s wife, Emiliana, told me. Palmer was bombarded with emails from evangelicals and Pentecostals who wanted to be part of the unity miracle. Emiliana called Francis, wondering what to do. He told her to “let it go” — the wind of the Spirit was blowing.

In June 2014, the video led to a meeting in Rome that included Palmer, Francis, Copeland and another TV preacher, James Robison. All told, the leaders at the meeting represented more than 1.8 billion Christians, including the Pentecostal movement, the fastest-growing segment of the church. 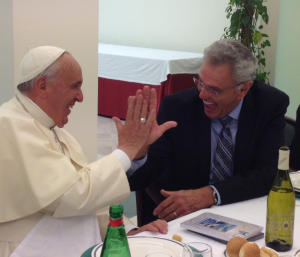 The meeting included a two-hour lunch, with prayer, hugs, laughter and even a high-five from Robison to the Pope. Francis, as Robison put it, spoke fervently “on the need for everyone — Protestant, Catholic, whatever — to have a personal encounter with Christ.” Lit up by the message, Robison said, “Sir, as an evangelist, that deserves a high-five.”

Because the video of Palmer’s introduction had shot round the world alongside Francis’s greeting, Palmer’s light was shining out perhaps more brightly than it ever had; then just as quickly, it went out. On July 20, 2014, a car struck the motorcycle Palmer was riding near his home in England. He was in surgery for 10 hours before he died, a 48-year-old man who left behind his wife, Emiliana, and their two young adult children, not to mention many shocked Christians.

Palmer was born in England and moved to South Africa when he was 10. He met Emiliana there. She came from a wealthy Italian family who had traveled the world before settling in South Africa. Though neither was a practicing Christian, during their engagement they attended a conference at the Christian Family Church in Johannesburg. The pastor gave an altar call, and Tony and Emiliana went up and dedicated their lives to Jesus. Later that afternoon they went to a party in a wealthy neighborhood. Tony was offered drugs, which he had taken in the past, but something had changed. Emiliana recalls: “He looked at me and said, ‘Emi, I don’t belong here anymore.’” They left together.

After getting married, Tony and Emiliana quit their jobs so they could go full-time as door-to-door evangelists. They hit the streets for eight or nine hours a day, watching VHS tapes of Kenneth Copeland’s preaching for inspiration before they went out. According to a video on Copeland’s website, the Palmers led 167 families to Christ during that time.

During the 1990s the Palmers came in contact with the charismatic renewal in the Catholic Church. As Tony put it later, “When my wife found out that she could be charismatic, evangelical, Pentecostal and Catholic, she wanted to reconnect to her Catholic roots.” Their children were raised Catholic, but Tony remained an evangelical.

But the invitation was conditional on the Palmers raising their own financial support. Just one couple agreed to back them financially, Kenneth and Gloria Copeland. The Palmers sold their car and house and used the money to support their new work.

While in Italy, Tony joined the Communion of Evangelical Episcopal Churches (CEEC), a young Anglican group with its base in Florida that had grown from a circle of charismatic evangelicals who had felt a hunger for the sacraments. With the CEEC, Tony became an Anglican priest, and later a bishop. The CEEC is a communion that is independent of the Anglican Communion led by the Archbishop of Canterbury, but claims historic apostolic succession for its bishops.

The story of how Palmer came to be friends with Bergoglio begins in 2003. That year Calisi, Palmer’s co-worker, helped start an ecumenical group in Argentina. The group brought evangelical and Catholic leaders together for fellowship and prayer and sponsored an annual charismatic rally, which Bergoglio began attending in 2004. For the first two years, he went as a spectator, but something changed in 2006.

What happened is related in Austen Ivereigh’s biography The Great Reformer. The cardinal spent the morning, as usual, seated along with everyone else, but in the afternoon he came up to give a speech to the 5,000 Christians gathered there. He “asked the preachers first to pray for him, and knelt, with his head bowed, as they held their hands over him,” Ivereigh writes. The pastor leading the prayer, Norberto Saracco, “ended with a crescendo of invocation: ‘Fill him with your Holy Spirit and power, Lord! In the name of Jesus!’”

Ivereigh describes how Bergoglio then preached with “new fervor,” with “passion, urgency, clarity and strength.” After the conference, the cardinal started praying regularly with a group of evangelical pastors. Later he arranged for some of them to preach at retreats for the Catholic priests of the Buenos Aires archdiocese, aimed at helping them have a personal relationship with Jesus.

Also in 2006, Palmer, Calisi and a few others went to visit Bergoglio in connection with their ecumenical work. He asked to hear their stories. Palmer explained how his family attended Catholic mass together but he could not receive communion, a fact that had perplexed the Palmers’ children. When he finished, “Father Mario just wept,” Emiliana told me. (The Palmers usually spoke affectionately of Bergoglio, calling him simply, “Father Mario.”)

Bergoglio asked Palmer if they could keep in touch. With phone calls, emails and occasional face-to-face meetings, their friendship grew.

During one of those conversations, Palmer spoke to Bergoglio about whether he should become Catholic. He described the cardinal’s response to Ivereigh: “[Bergoglio] told me that we need to have bridge-builders. He counseled me not to take the step because it looked like I was choosing a side and I would cease to be a bridge-builder.”

When Bergoglio was elected as Pope Francis, Palmer expected that their friendship would be permanently changed. So he was surprised when, after Christmas of 2013, Francis called him at home and asked when he could come to Rome for a visit. During that meeting Palmer told Francis about the Copeland conference, asking if Francis would like to send a message. “Why don’t we make a video?,” Francis said after a pause. Then he gave the greeting that went viral on YouTube.

Palmer’s funeral was held in Bath, England, a Catholic requiem mass at which Bruno Ierullo, a Pentecostal from Toronto and an ecumenical leader who knew Palmer, sat near the altar along with the priests and bishops. Emiliana tearfully read a message from Pope Francis: “We were great friends. . . . Those of us who love him feel impelled by his zeal to follow in his footsteps, to walk without rest preparing the bride, one single bride for the bridegroom who will come.”

In October, Francis met with Emiliana and a contingent of bishops from the CEEC. He announced that Emiliana and Archbishop Robert Wise had agreed to “carry the torch, this dream which was Tony’s: this dream of being able to walk in communion.”

It is too early to tell what will come next in this work that the Holy Spirit brought about through Tony and Francis. The wound of Tony’s death is still raw, and from the moment Tony took out his iPhone no one was following a script.

One possibility stems from a draft document that Palmer, Copeland and Robison brought to Francis in June, 2014. Ivereigh spoke to Palmer just after the meeting, “Palmer told me the draft declaration has three elements: the Nicene-Constantinopolitan Creed, which Catholics and evangelicals share; the core of the Catholic-Lutheran declaration of 1999 making clear there is no disagreement over justification by faith; as well as a final section asserting that Catholics and evangelicals are now ‘united in mission because we are declaring the same Gospel.’”

“I’m convinced that this is a highly significant historical moment,” Ivereigh told me. “We will look back and say, this was the moment where Catholics and evangelicals came together.”

The key, says Ivereigh, is not simply Francis’s openness to building friendships across denominations, but the fact that Francis is charismatic. “All Catholic charismatics should now be saying that this is a charismatic pope—he is. And that’s why Copeland and Robison and these others are responding to Francis. They’re saying, look, this guy is a man of the Spirit. He is a Spirit-filled pope responding to the promptings of the Holy Spirit and discerning that this is the moment, the kairos, and that he must do what he can to bring this about.”

This miracle of unity began with something small: a private video message that became public. It fueled a coming together of Tony’s evangelical and Pentecostal friends with his Catholic friend Francis while sweeping in hundreds of thousands of others through a 21st century spiritual agent—YouTube. For it to grow larger still requires something even more profound, the fulfillment by the Spirit of an ancient spiritual promise: “Unless a grain falls into the earth and dies, it remains just a single grain; but if it dies, it bears much fruit.”