By Sean Connolly
Thirty-one Trinity School at Greenlawn sophomores spent Project Week working in the chemistry labs at Saint Mary’s College. They were living out an idea hatched by former Greenlawn chemistry teacher Katy McShane (South Bend) a year ago.

The key catalyst for their learning was Dr. Toni Barstis, a Saint Mary’s chemistry professor, Trinity parent and cancer survivor.

Toni and Katy began talking about the idea after last year’s Project Week. They formed a bond through their common enthusiasm for science and their common connection to cancer. After Mrs. McShane died from pancreatic cancer in October, her co-chemistry teacher (and the new head of school) John Lee added his enthusiasm, and the plan for this year’s Project Week was born. St. Mary’s offered the labs and Dr. Barstis volunteered her time to guide the students. 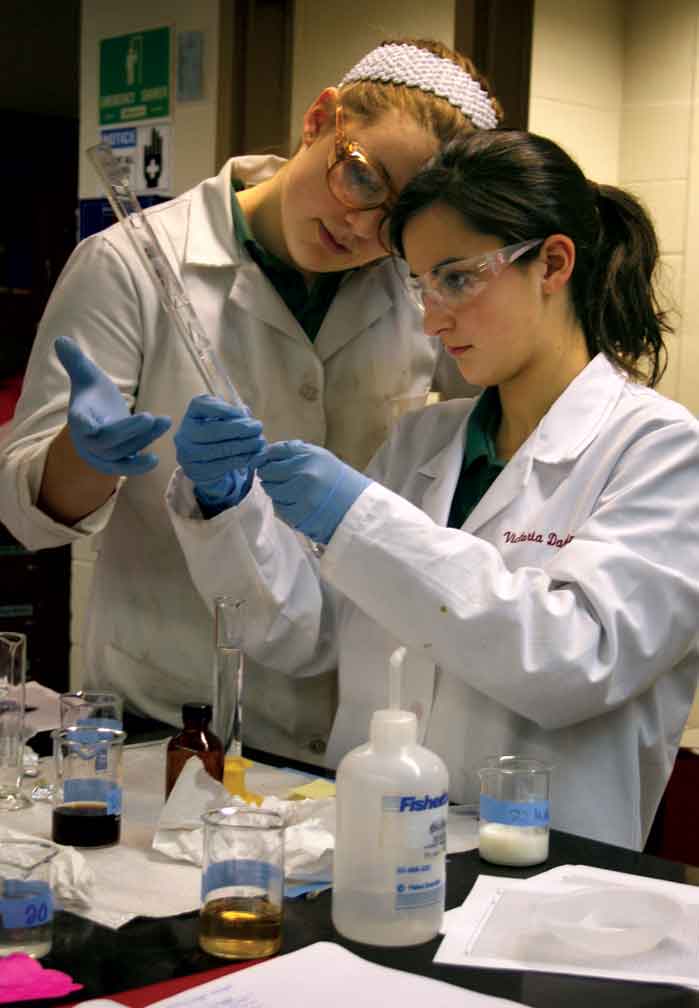 They began with the basics, designing experiments to study how the mass of a penny changes after years in circulation. They moved on to synthesizing aspirin and learning a lab technique called thin-layer chromatography, which they employed to determine the chemical make up of over-the-counter pain tablets. (This technique could come in handy in a poisoning situation, Dr. Barstis explains—if someone swallowed a host of unmarked tablets and their composition had to be determined in a hurry).

The students spent the final three days executing their own experiments around common foods and beverages. Many measured the sugar content in soft drinks. Others explored the fat content in burgers, the salt content in soups and the calorie content in nuts. All the students prepared formal lab reports to communicate their findings.

“I wanted to make sure that the experiments weren’t scripted, that the students could create and put their own stamp on their work,” Dr. Barstis says.

Grace Pingel and Christa Rose tested burgers from McDonalds, Burger King and Wendy’s.  They ground the meat, liquified it, and spun tubes of liquified meat in the centrifuge to isolate the fat from the protein, before carefully weighing the fat. The Burger King patty measured in at 28.6% fat, while Wendy’s scored the healthiest burger, with 14.4% fat.

Michael Sayre and Bobby Cramer tested the sugar content in sodas and other drinks. They prepared sugar-water solutions to use as controls and used a homemade hydrometer (basically a small buoy) to measure the density of their solutions. Then they compared the densities of the sodas with the controls to determine sugar content. The two were surprised that Mountain Dew and Arizona lemon tea had similar sugar concentrations—about 17% (the highest concentrations they measured).

Nate Griggs and Tim Pingel tackled the salt content in soups. Their experiment involved reacting silver-nitrate with their soup and some chromate ions. The reaction was supposed to yield a red precipitate. But they ran into trouble when testing tomato soup--there was no way to see the precipitate in the red soup.

From left, Guanhua, Noah, Natalee and Alex in the Saint Mary's chemistry lab.

This is exactly the sort of real world problem Mr. Lee was hoping students would stumble upon. “When the groups come to a roadblock,” he says, “they have to collaborate and ask themselves, what chemistry do we know that will help us go beyond this?”

In the case of the tomato soup, Tim and Nate redesigned their experiment to get around the obstacle. “We used a filtering process that we had learned the day before synthesizing aspirin,” Tim said.

“It was a lot of fun being in a college lab,” added sophomore Marian DeLee. “It made us feel more like scientists. I also liked the independence we had. Our teachers didn’t give us a lot of instructions, just the basics. We had to figure out how we wanted to make our measurements.”

The concentration on the students’ faces and the excited chatter in the lab made the students’ reactions to the week of experiments seem obvious.

“My goal was to encourage the students, to get them excited about science, to take Katy’s energy and build on that,” Dr. Barstis said.

It’s an experiment that Mr. Lee hopes can be repeated next year.