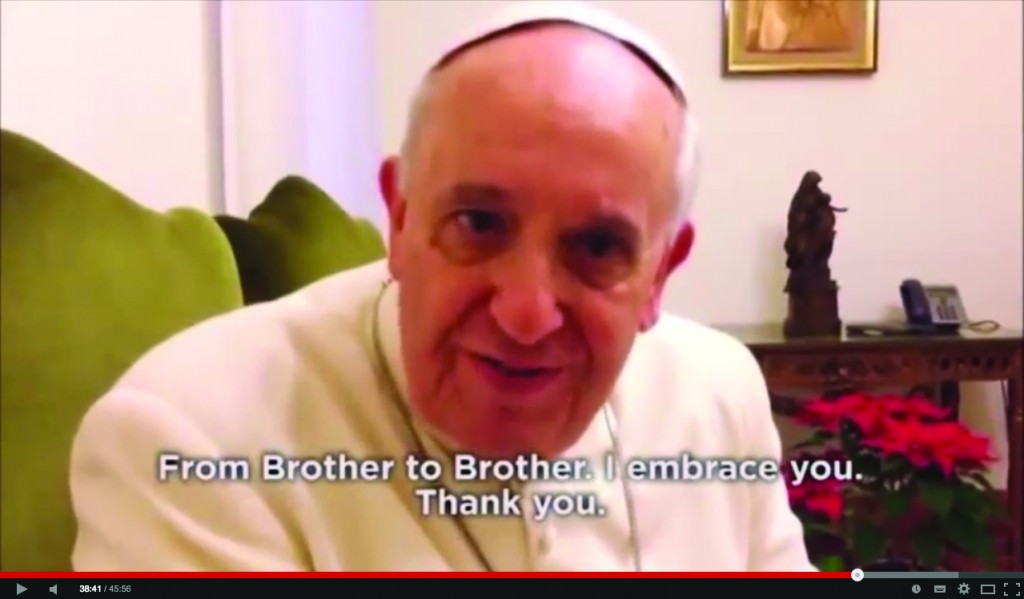 A frame from Pope Francis's video greeting to a gathering of Pentecostal ministers in January, 2014.

Today on the website RealClearReligion, you’ll find an article by our communications program coordinator Sean Connolly, “Time to Return to Christian Storytelling.”

The article is based on a talk Sean gave at the recent Leaders’ Conference for Men, “Cutting to the Heart: How To Communicate in a Post-argument World.” Sean’s talk and others from the Leaders’ Conference will be available soon in video and audio versions on the People of Praise web site.

Here is an excerpt:

Alberto Methol Ferré, a Uruguayan intellectual, attended the Latin American bishops conference in Puebla, Mexico, in 1979. He took a taxi from the conference to his hotel, and his driver asked, "Have you seen that with each passing day the Pope speaks better Spanish?"

Ferré replied in a halfhearted way: "If you say so, it may be true."

But the driver, raising his voice said, "Yes it is. And do you know why? Because he loves us."

With his broken Spanish, Pope John Paul II had cut the taxi driver to the heart. But intellectuals who had been focused on "analyzing what the pope said," as the Uruguayan put it later in an interview, had missed the meaning of his gesture.

This style of communication -- cutting to the heart -- has not been much utilized in the public communications of the church in recent decades. Examine the debate over gay marriage, and it's obvious that Christians, relying on reasoned arguments and appeals to authority, have not penetrated the hearts of the masses. While gay marriage proponents, with all their talk of personal love, have broadly resonated.

Perhaps this is what Pope Francis was getting at when he urged the church to talk less about gay marriage and more about "what makes the heart burn."

But Christians should not copy the secular communications strategy of the gay marriage movement. Cutting to the heart is a far older approach and a deeply Christian practice. In Acts 2, Luke records that after Peter rose to speak about his friend and teacher Jesus, the people in Jerusalem were "cut to the heart." Following in Peter's footsteps, countless Catholic and Protestant saints have aimed to win friends for God by resonating with that core muscle: Francis, Ignatius of Loyola, Teresa of Avila, Philip Neri, John XXIII, John Wesley, Smith Wigglesworth, Billy Graham.

Recently, I was speaking to a group of leaders in the People of Praise, an ecumenical Christian community I belong to in South Bend, Indiana. I showed them clips from the viral video of Pope Francis greeting a group of Pentecostal leaders affiliated with Kenneth Copeland's ministry. I asked the leaders to call out adjectives that described the pope's communication style. Their responses: "genuine," "sincere," "joyful," "humble," "warm," "vulnerable." Let's add a few others: heartfelt, spontaneous, raw, attractive, beautiful, and bold.

You can read the rest of the article here: http://www.realclearreligion.org/articles/2015/04/01/time_to_return_to_christian_storytelling.html