Annie Bulger (South Bend) delivered one of two valedictories at Saint Mary’s College (Notre Dame, Indiana) on Saturday, May 19. Annie was named co-valedictorian of the Saint Mary's College class of 2012 in March. 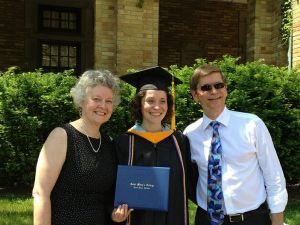 Annie with her parents, Jim and Beth Bulger.

Annie majored in math and maintained a perfect 4.0 grade point average during her time at Saint Mary's. After finishing classes in December, she began working as a web site developer for one:ten communications, a community business which is part of the LaSalle Company. She lives in the Elkhart, Indiana, house of the Sisterhood. Annie grew up in Servant Branch and attended Trinity School at River Ridge.

"I am humbled by this honor, knowing that all I have comes from the Lord and all praise is due to him," she says.

In 2006, Annie began a two-year break from her studies to serve with the community's Missionary Company. In her valedictory, she drew on this experience, recounting a story about a man named Arnold who lived in a run-down neighborhood in Evansville: "We sat in rusty, yellow folding chairs that cluttered the porch of his ramshackle house, and Arnold began to tell how he experiences the world. 'I thank the Lord for waking me up every morning,' he said. 'I get to open my eyes and see his world. Then I get to feel his blood warming up my body. I get to splash some of his water on my face and sit down to eat some of his food.’ After a slow breath he continued with a smile, ‘I'm the richest man in Evansville. I'm dirt poor, but everything I see is mine because it belongs to my Father.’"

Annie went on to explain that her conversation with Arnold produced lasting fruit in her life and she urged her fellow graduates to produce lasting fruit through the major decisions they will be making. (The full text of Annie’s valedictory is available here.)

Annie credits her parents, Jim and Beth Bulger (Servant Branch) and her former Trinity School teachers with giving her a solid educational foundation. "The Trinity senior math course played a big role in my decision to major in mathematics," she says. "John Vogel (Servant Branch) had a way of tantalizing us with powerful concepts like fractals and Cantor's theory, teaching us just enough that we were in awe of their beauty but not so much that our curiosity was diminished."

Campus division coordinator Paul Kane (South Bend) says he has seen several former missionaries make smooth transitions back to college following missionary work. "They become more confident and mature during their time as missionaries—more sure of the educational path they want to follow. It's no surprise that they hit the ground running when they come back to their studies."

Annie says that all of her past experiences—in math and on the mission field—contribute to her work as a web site developer. The logic skills she learned as a math major are a good background for computer programming work and the communications skills she learned as a missionary are an asset in relating to customers. "I'm grateful to the Lord for such a good job to start off with," she says.