Bikes for Allendale and Beyond

Just over a year ago, Jim Ingram (Servant Branch) decided to find a couple of old bikes, restore them and send them to Allendale. Now he and other south central area members are turning castoff bikes into reliable rides for children in Louisiana and Minnesota alike. They've restored 19 bikes so far, including 10 for Allendale children. About 20 more bikes are in the pipeline. 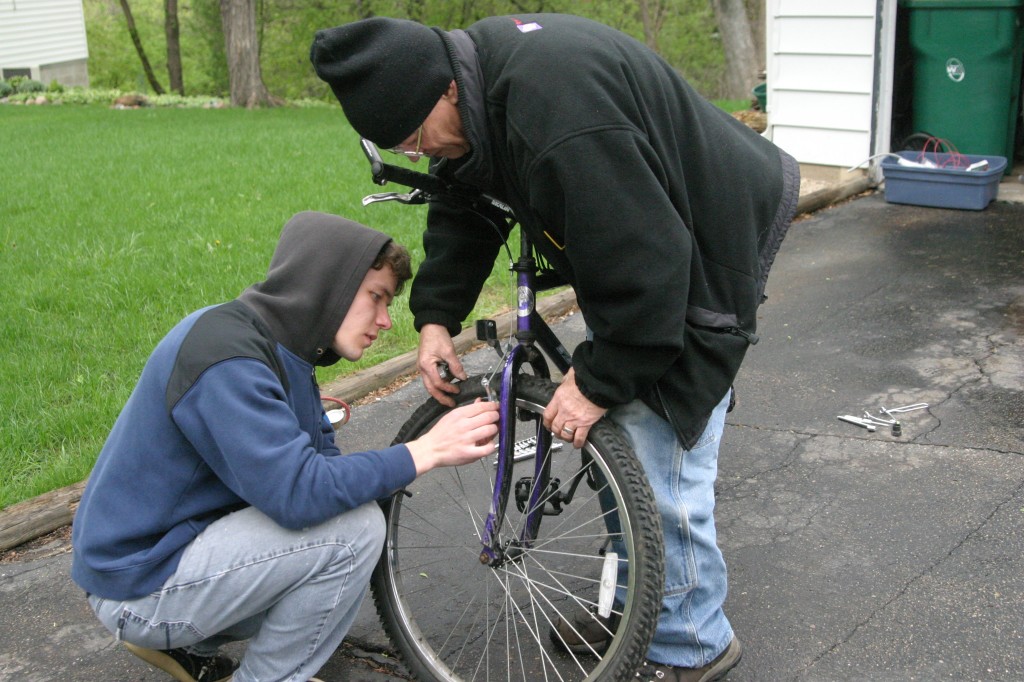 The idea for the project came after Jim saw a video of Gerry Deakin’s bike workshop in Allendale. Gerry had begun fixing bikes so he could strengthen his relationships with neighborhood boys. The demand for working bikes was high, but Gerry didn’t have much in the way of funds, spare parts or tools.

Jim works as an electrician at several apartment complexes. I see abandoned bikes all the time, he thought. He called Gerry and immediately agreed to send two bikes.

Members of the south central area offered Jim several older bikes and a garage to store them in. Jeff Winkler, an experienced bike mechanic, helped Jim get the bikes into good repair. The Brummer family delivered the first two bikes on an Easter break trip to Allendale. Jim has since sent eight more.

Gerry is thrilled. “If I see a need for a particular type or size of bike, I can e-mail my requirements to Jim and he comes through. I see the smiles on the kids’ faces when they pick up their bikes—they’re so grateful!”

Kalayna and her new bike

Jim learned that many Servant Branch children and some college students also needed bikes, and so he began expanding his mission. Kalayna, a seventh-grader in the south central area, had outgrown her bike and hoped for a new one in time for her class’s bike hike. Jim offered a shiny, new-looking 10-speed, which he adjusted to fit her perfectly. “Having the gears is cool—it’s much easier to ride up and down the hills between home and Grandma’s house,” Kalayna says, “and I love its sparkly purple color!”

The project has borne other fruit as well. Last fall Jim and his crew conducted a bicycle maintenance clinic for the Arrows, Servant Branch’s youth ministry for boys K-6, and they’ll do one for a girls’ group this year.

Meanwhile, after a branch-wide appeal, the supply of bikes keeps growing. Mike Wacker helped Jim acquire 16 more bikes from an apartment house in Dinkytown. The bikes are now being stored in various garages. Requests for bikes are also on the rise. Fortunately, the crew is also expanding. Mechanics Ken Brown and Bill Sturman have pitched in regularly, along with members of Servant Branch’s Action division and its Campus division.

"This will be a busy season," Jim says.