God's Gift to the Hammer Family

September 21 was a happy day for Dana and Patty Hammer (Buffalo). After a two-year process, they were able to finalize the adoption of a little boy named Corey, who has lived with them since a few days after his birth. The finalization happened over Skype, with a judge and adoption agency representatives calling in from their homes. Corey sat on the call with Dana and Patty and his big brother Bentley, whom the Hammers had adopted in March, 2019.

The Hammers' adoption story began in 2000, after the birth of Jacob, their fourth child. Dana and Patty told God four was enough--their family was the right size. As time went on, however, they felt convicted to be open to more children.  Their wait lasted for many years. “No one could have predicted what ended up happening, but we’re grateful and in awe of the Lord’s plans, which are bigger and better than what we can come up with,” says Patty.

“In 2016 when our children were pretty well grown, we took some classes on becoming foster parents,” says Dana, “and Patty got interested in taking care of drug-addicted babies.” They passed all the necessary requirements through the local Catholic Charities office. Then one day a call came, asking if they could be foster parents to a six-month-old named Bentley.

Bentley wasn’t addicted to drugs, however. Left at the hospital soon after birth, he had been living in a foster home for six months. There he was neglected and suffered malnutrition, “probably left in his crib all the time,” says Dana. He was several pounds underweight, which is significant for a six-month-old. Finally a doctor recognized his condition as  ‘failure to thrive’ and removed him. 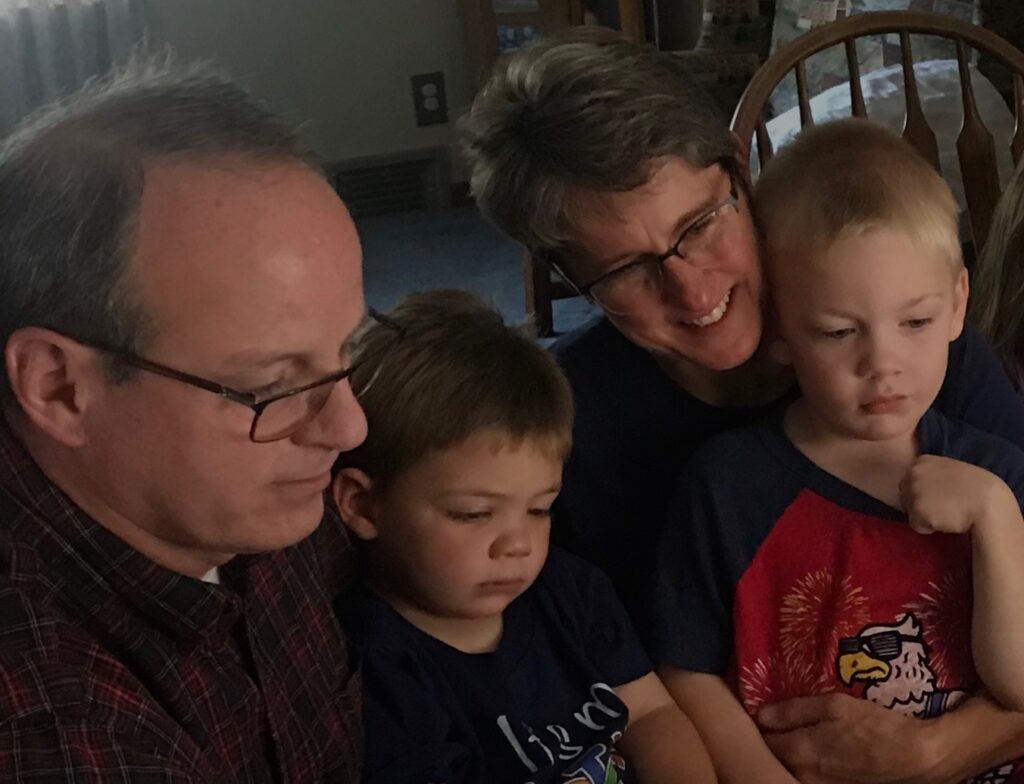 Corey's adoption is finalized via Skype.

Dana was on a Buffalo branch men’s retreat when Patty received the call. Patty went to see Bentley and sent pictures to Dana. “It was love at first sight on my part,” says Dana, but there were some obstacles. Officially, he and Patty were open to a “foster-to-adopt” situation, but he really didn’t expect it to happen. They both considered themselves too old to start adopting younger children (Dana was 54 and Patty was 51 at the time). They agreed to take Bentley into their home as a foster child. As they took care of Bentley, however, the idea of adoption grew on them. They began to notice other older adults adopting and got encouraging comments from social workers. Patty, a part-time nurse at a local convent until Bentley’s arrival, was urged by the older nuns to take on the challenge.

They took the step of applying to adopt Bentley, and on March 20, 2019, the adoption was final. “He was skinny when he came to us,” says Dana, “but he’s quickly gained weight. He has big hands and big feet. He may grow to be over 6 feet tall. His motor skills have come back quickly. He's a very active boy, says lots of words, knows his alphabet and likes being read to.”

Little Corey was a surprise to the Hammers. Catholic Charities, which had facilitated Bentley’s case, discontinued its work with adoptions. Patty, who had been hoping Bentley wouldn’t feel like an only child, began to resign herself to the possibility that he would grow up like one. But on September 7, 2018, five days after Catholic Charities ended its services, the Hammers received a call from the new adoption agency. Five days earlier, Bentley’s birth mother had given birth to another son (Corey).  Dana says, “The agency asked if we would take Corey in as well. Wanting to keep the  siblings together, we said ‘Yes.’”

“There's lots of laughter and joy in our house these days,” says Patty. “No more empty bedrooms--we’ve filled them up. Our other four children: Emily, 26; Hannah, 24; Levi, 22, and Jacob, 20, love the boys. Emily and her husband, Elliott, have signed documents committing to caring for the boys should anything happen to us.”

“It’s been a privilege to care for them,” she adds. “It feels so right to have the boys around. They’re a perfect fit. Some people even say they look like us. Through it all I learned to be open to things, to be patient. God provides for everything. His handiwork is amazing.”