Hurricane Sally blew through Mobile, Alabama, on Wednesday. Though most branch members lost power and many of their properties sustained minor damage—with fallen trees and shingles blown off, brothers and sisters are praising God that everyone is safe.

With a wind speed of 105 mph, Sally made landfall as a Category 2 hurricane early Wednesday morning, near Gulf Shores, Alabama. Mobile is 40 miles northwest of Gulf Shores and sits at the north end of Mobile Bay which opens into the Gulf of Mexico. Fortunately for Mobile, the winds shifted slightly, pushing water from Mobile Bay out towards the ocean instead of flooding the city.

The hurricane, traveling at just two miles per hour, stalled over the region for many hours. In Mobile, lights began to flick out on Tuesday night, and by Wednesday morning Alabama Power reported over 175,000 customers without power in the area. Mobile ultimately received about five inches of rain and wind gusts of up to 82 mph, according to preliminary data from the National Weather Service. Meanwhile, Orange Beach, AL, southeast of Mobile, was deluged with nearly 30 inches, as was Pensacola, FL. “Mobile really dodged a bullet,” said branch member Lydia Gaudet.

On Thursday, after the storm had moved out and blue skies returned, schools and many businesses remained closed. Majestic live oak trees lay uprooted in a historic town square. Myriad crews raced to restore power as quickly as possible and clear the streets of debris. The city imposed an overnight curfew to facilitate cleanup work. 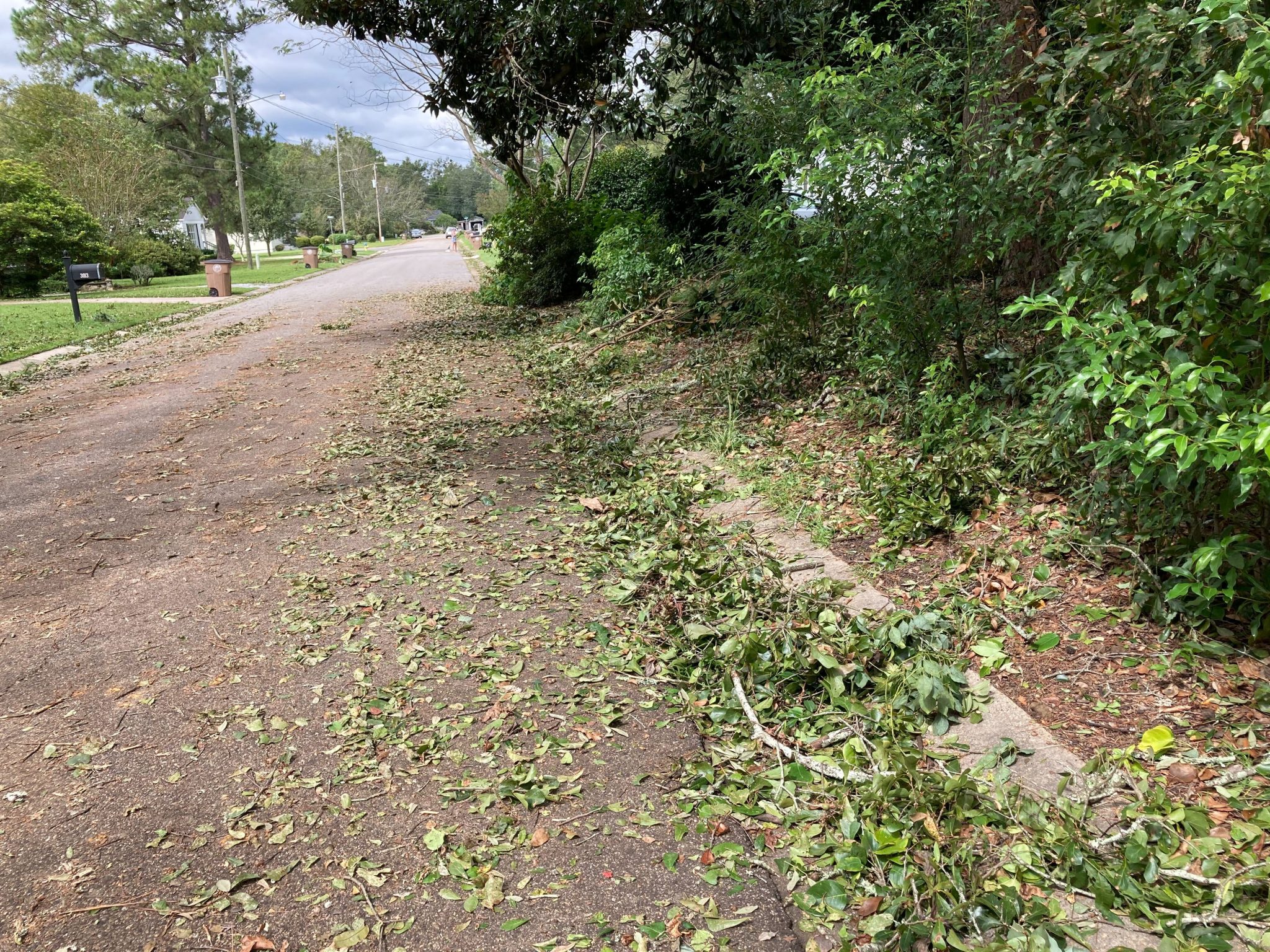 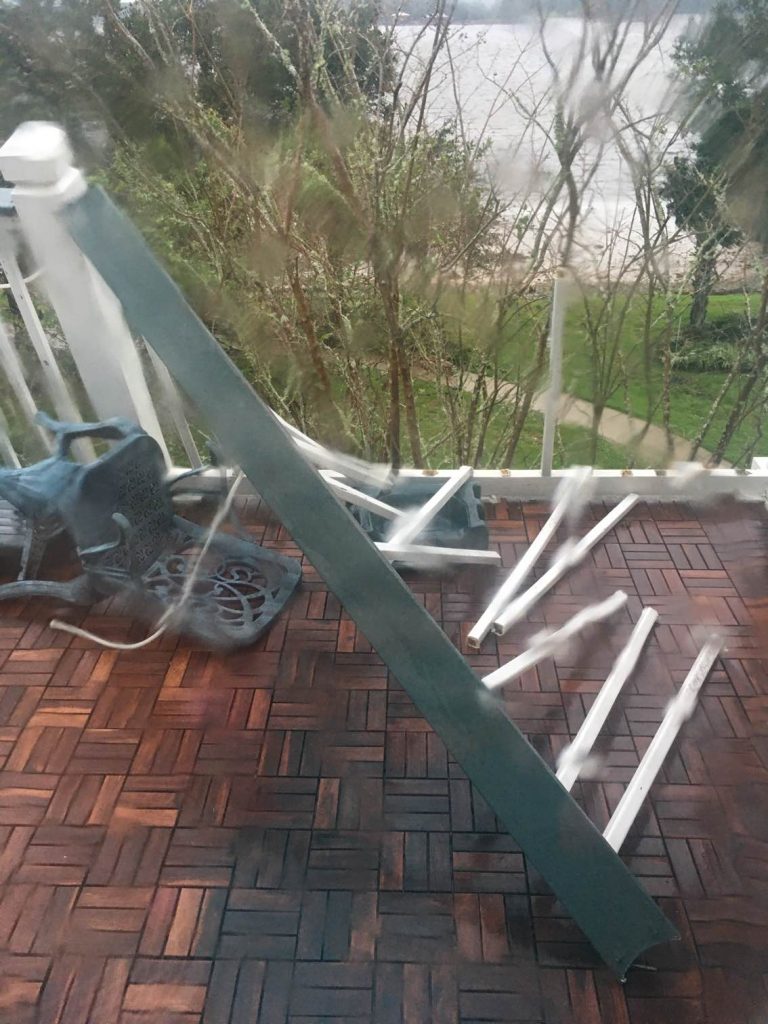 Walter and Julia Drey live on Dog River, close to the bay. Their home is raised seven feet off the ground, but it has flooded in past storms. Julia reported, “The wonderful thing is that the river did not rise. The North wind actually blew the water out of the river, so that was a real blessing.” The Dreys did have driving rain seep into the living room through cracks in the doors. They hurried around with towels, mopping up water. “We set the alarm at night for every two hours to go around and check the house,” she said. A lot of shingles blew off the roof, so Walter put a tarp over it to prevent leaking. In the middle of the night, the balcony railing finally gave way to the tree that had been beating on it continuously. “We’ve got a lot of yard cleaning up to do,” said Julia, “but my basic attitude is I’m very grateful it wasn’t worse.”

Mary Ellen Naylor lives with her sister and her adult son, daughter and son-in-law. They lost electricity at 10:30 pm on Tuesday. At 3:30 am, they heard the crack of the neighbors’ large oak tree, followed by the crash as its branches landed on their roof, breaking through in four places. Mary Ellen’s son-in-law went out later and cleared away as much tree as he could without the use of his electric chainsaw. He managed to get a tarp over most of the holes for now. “The rain was torrential at times, a lot of it happening after dark. Trees were really whipping around,” said Mary Ellen. 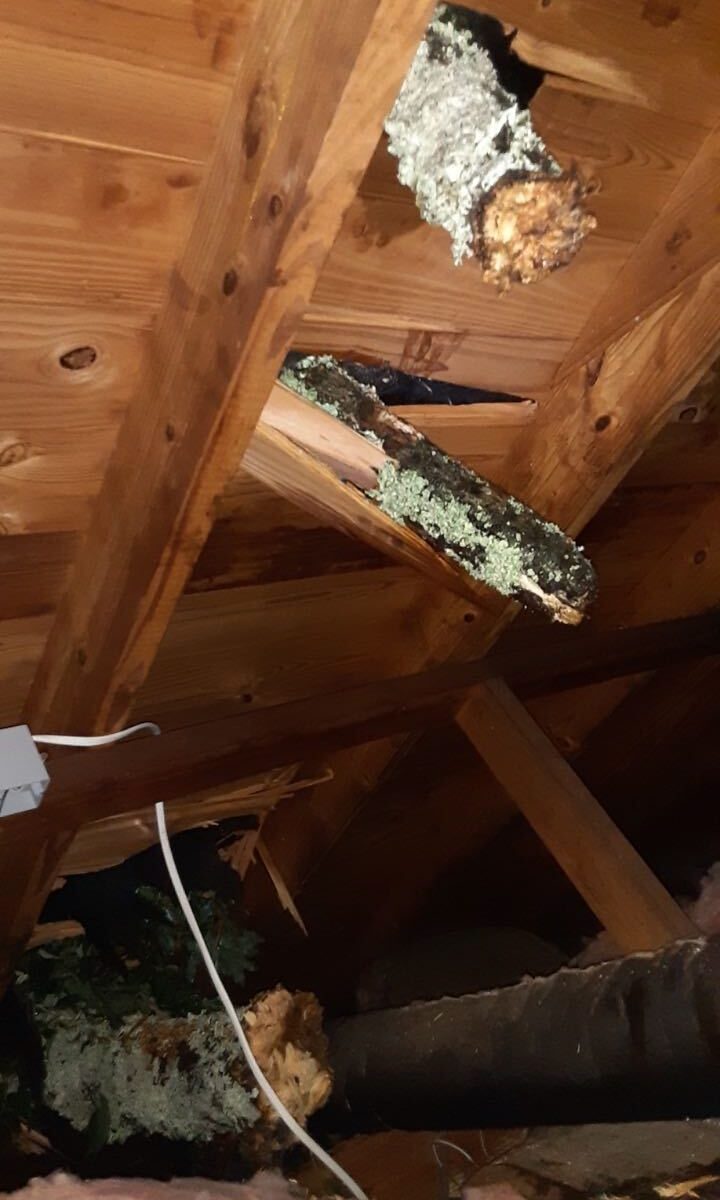 Branches poking through Mary Ellen's roof into the attic.

“The worst part of a hurricane is the heat afterward,” said Rose Denton. Bill and Rose Denton also lost power Tuesday night. It was hard to sleep after that, especially for Rose and her mother (who lives with the Dentons). Rose was still off work, but on Thursday Bill had gone out to the non profit camp he works at and spent the whole day doing cleanup on the property. The Dentons lost the awning over their kitchen door and part of their privacy fence. The cable line was down in the backyard.

Tony and Phyllis Compretta were getting ready on Thursday to put some of their food in Manny and Donna Ganzarain’s freezer, since the Ganzarains have a generator. “Our street did look messy,” said Phyllis, “but people started coming out yesterday and cleaning up yards. There’s a lot of loose shingles. We can’t tell where they came from.” The Comprettas didn’t lose any large trees, but Phyllis was mourning the loss of several smaller ornamentals, including her crepe myrtle. “There was a lot more wind intensity than we realized it was going to be,” she said. “It just went on for hours and hours and hours. I’m glad it wasn’t any worse.”

Steve and Lydia Gaudet also have a generator, so they had something of an open door on Thursday, with neighbors and grown children coming over to put milk and eggs in the refrigerator, make coffee and charge cell phones. One of their children borrowed the camping stove and propane. “When you live here,” said Lydia, “you keep that stuff around.”

“We’re so grateful that everyone is safe and that the damage wasn’t greater,” said Mike Coney, who is the coordinator from the branch relations council responsible for Mobile. “Please pray for the clean up effort in Mobile and especially for those in Alabama and Florida who sustained major flooding."