Wildfires Burn in Oregon and Washington

Jim McDowell (Corvallis) recalls the weekends and summers he spent at a cabin his family built amid towering hemlock trees on the north fork of Oregon's Santiam River. Starting from age 12, he helped clear the land and learned to spot Chinook salmon in the river. Over time, he came to treasure the cabin as "a place where you can step away from the world and see God face to face in the quiet.”

The cabin is gone now—burned in the Beachie Creek Fire. Beachie Creek is one of several conflagrations that swept down from the Cascade Mountains towards the heavily populated Willamette Valley, home to the community's Corvallis and Vancouver/Portland branches. Energized by high winds, it destroyed several small towns and scorched 190,000 acres. Closer to Portland, the Riverside Fire has burned 134,000 acres, while the Holiday Farm Fire, southeast of Corvallis, has burned 166,000 acres. 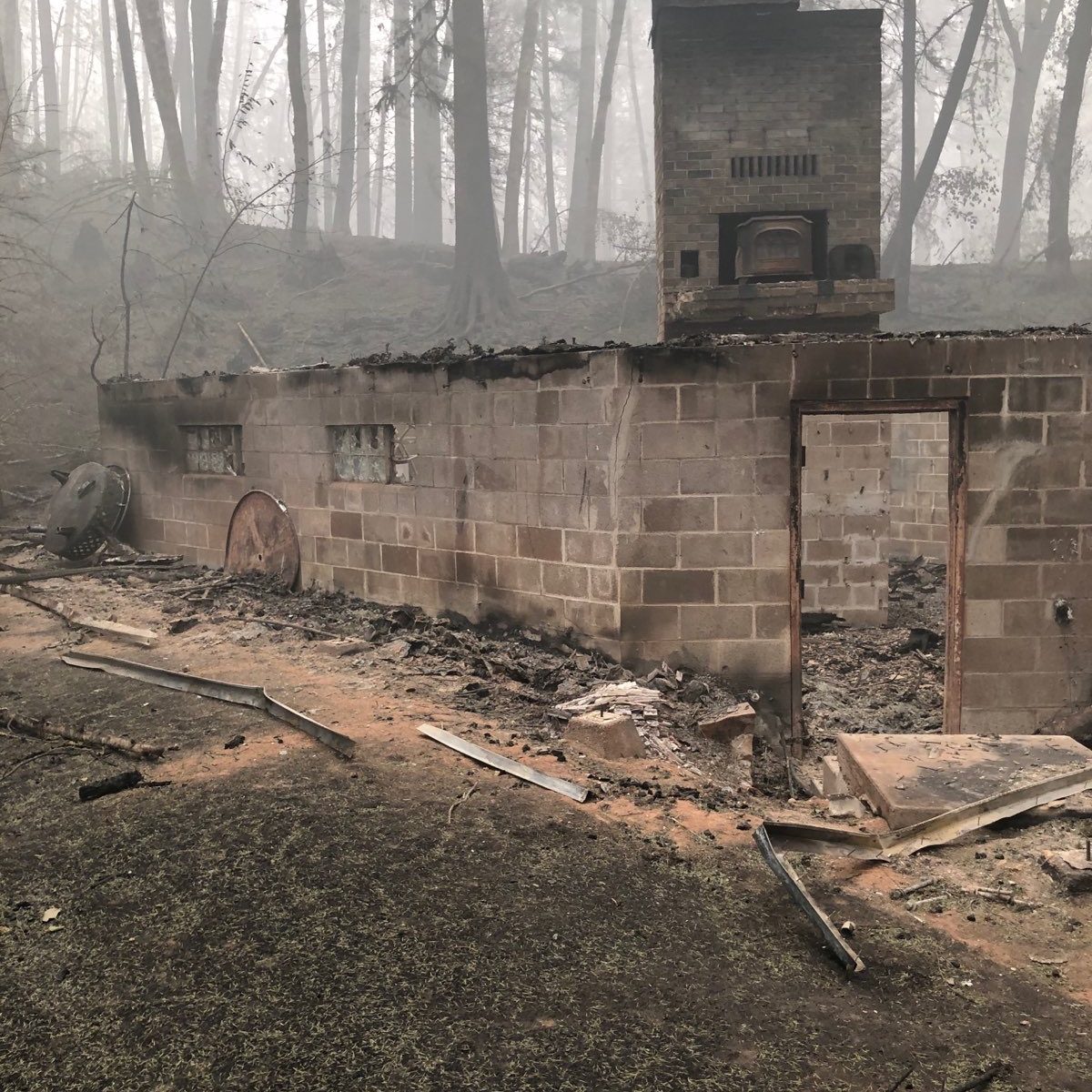 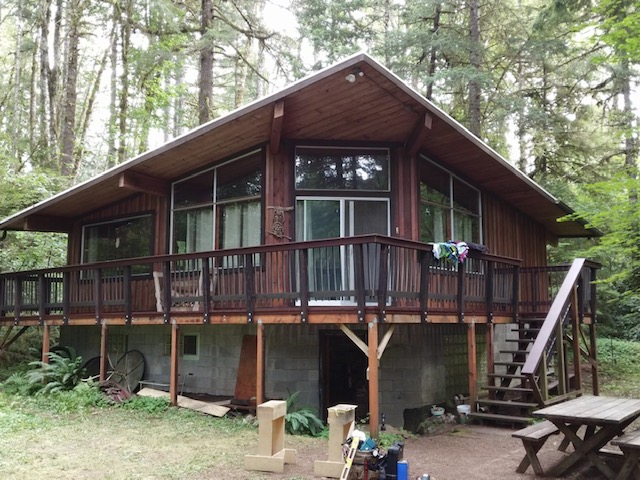 The McDowell family cabin before the fire. Photos courtesy of Jim McDowell.

As of Monday, in Oregon, 10 people have died from the fires and 22 are reported missing, according to the Oregon Office of Emergency Management. The winds have died down for now, allowing firefighters a chance to contain the fires. Dry conditions persist, but there is rain in the forecast this week.

Corvallis itself, after experiencing fiery-orange skies and ash falling like a light snow for several days last week, is now shrouded in a dense grey fog. The closest fire is 45 or 50 miles away by road, and the city is not in immediate danger. All branch members and their houses are safe, and yet life is hardly normal. "We haven't seen the sun in over a week," Principal Branch Coordinator Phil Monaco noted on Monday morning. "There are hardly any sounds. Everything is stopped.” 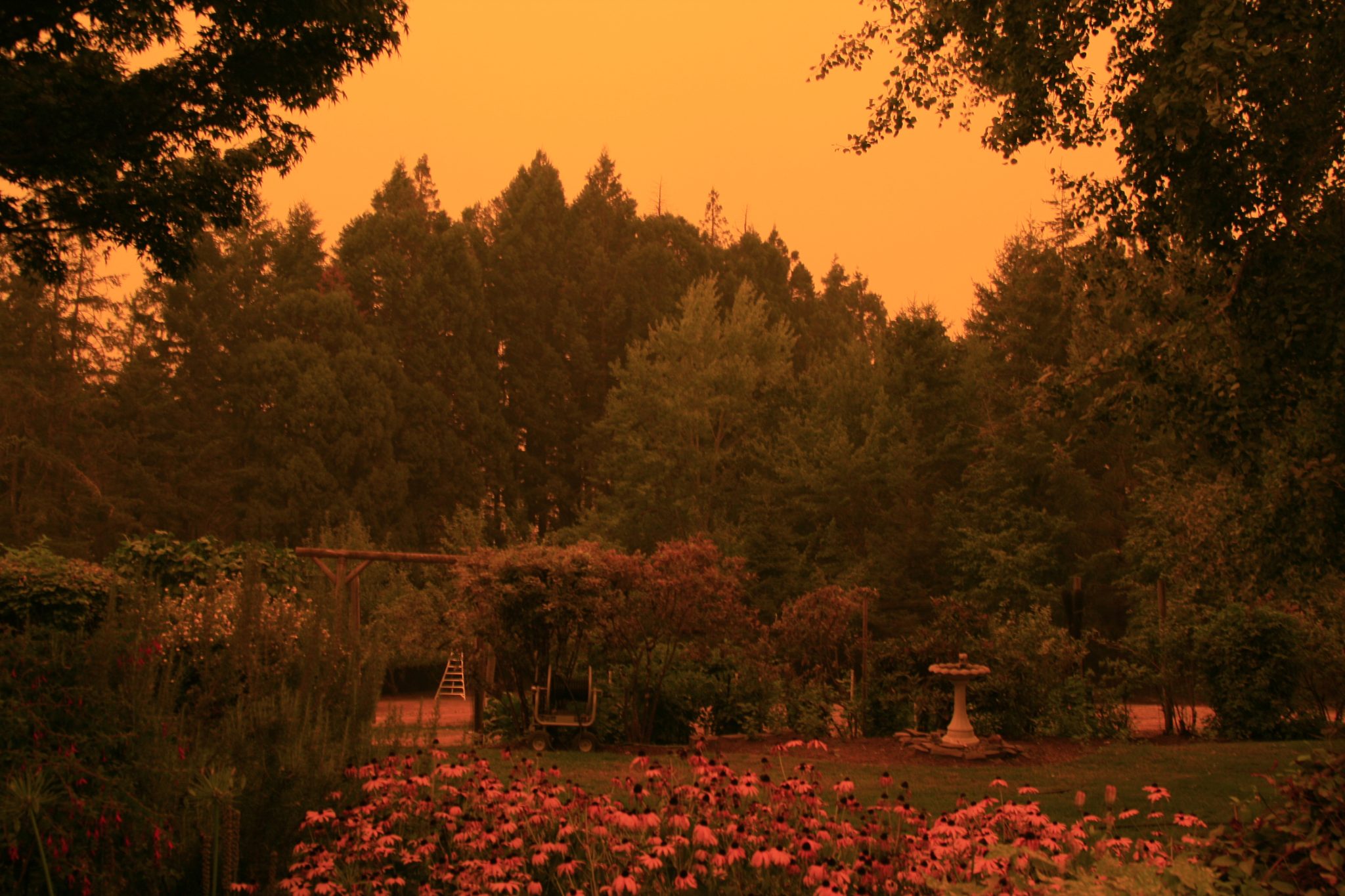 With their air quality registering in the "hazardous" to "very unhealthy" ranges according to a U.S. government website, branch members are largely staying indoors with their windows closed. The city hasn't picked up the trash in more than a week. Parks are closed. Tom Melton runs a road paving business but can't pave any roads since the asphalt plants are shut down. Tim and Mary Jo Wagner welcomed their son and his young family from Salem, Oregon, into their home, since the Wagners have a good air-filtration system. Geoff and Nancy Myers bought pet food and cleaning supplies and took them to a dropoff point for delivery to evacuees staying at the fairgrounds.

Jean Monaco has four cousins who live outside Vida, Oregon, near the heart of the Holiday Farm Fire. Two lost their homes, and she is waiting to hear about the home of a third cousin. Bryan Thompson and his family have been going for decades to a private campground called Taylor Park in Lyons, Oregon. They rent a space and have access to it year-round. Bryan says they were there on Labor Day weekend and knew the Beachie Creek Fire was nearby, but the winds normally blow to the east so they were not concerned. After they left, the winds blew west. “We have heard that all the structures are completely burned,” he said.

Eighty miles north of Corvallis, Portland currently has the worst air quality of any major city in the world, according to a report in The New York Times. The closest large fire, the Riverside Fire, is about 30 miles southeast of downtown Portland. It’s not currently threatening Portland, but that could change with a strong westerly wind. 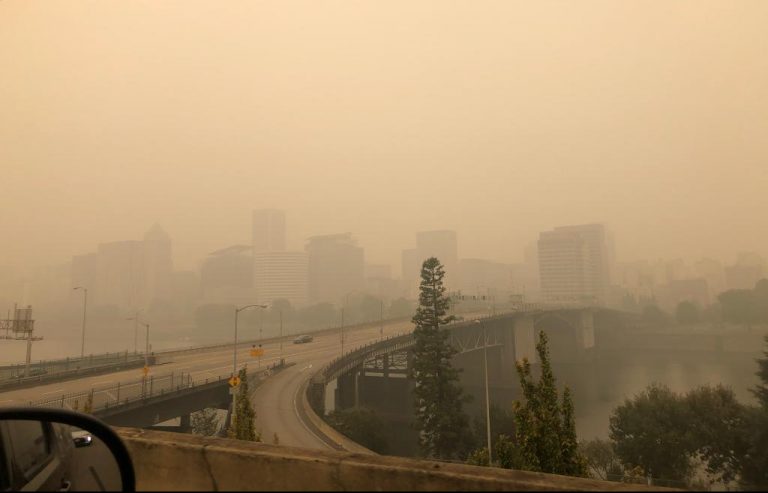 A view of downtown Portland on Saturday, September 12. Photo by Lena Glover.

"As soon as you get outside, it smells like a campfire,” says Principal Branch Coordinator Charlie Fraga. "Kids can’t go outside and play. It’s tough.”

He adds, “Just like with the pandemic, people in Portland are adapting to the new situation. You have a smile on your face and you’re praising God all the while.”

As in Corvallis, branch members keep their windows shut to keep out the bad air and ash. Kathy Bucheit spoke about sealing cracks with towels and blankets to keep out the ash and the acrid smell. Her nephew is a firefighter battling the fires in Clackamas County just east of Portland where the Riverside Fire is raging. Another nephew in Clackamas had to evacuate. She said she hasn’t gone outside for more than three days, except briefly to check the mail.

Sunday’s Vancouver-Portland branch meeting was supposed to be held outdoors in small groups, but instead took place on Zoom. The meeting included a time of praise and a sharing from branch member Toby Clairmont, an emergency preparedness expert, on how to create a “go kit” in case branch members need to flee, as well as conversation about reaching out to neighbors and intercessory prayer.

A view of the Kenton neighborhood in North Portland. Photo by Charlie Fraga.

Similarly, at the branch meeting in Corvallis, “We spent a good part of our time praying for the fire victims and that the Lord just put the fires out and that we get rain. We really need rain,” Phil said. They added prayers for an end to the pandemic, for peace amid the social unrest in Portland, and for a mighty outpouring of the Holy Spirit.

At their house in Battle Ground, Washington, Toby Clairmont and his wife Susie have their truck and RV ready to go in case they need to evacuate. They are about 20 miles from the Big Hollow Fire, which has burned 20,000 acres. Toby leads a volunteer team of amateur radio operators who are ready to help communicate evacuation orders to those living in hard-to-reach rural areas.

Ten or so miles away, Jeff Lindberg says he has been able to see the sun through the smoke. “It looks like a full moon.” He adds, “It’s been a drag for the kids lately because they want to go outside and play. For the most part we say, 'No, you can’t,' but we let them play a bit yesterday [Monday].

For his part, after losing his family’s cabin, Jim McDowell says, “I can see good coming out of it, in the sense that for my family, my brothers and sisters, there’s an opportunity to bring us all together."

Charlie adds, “With danger all around us, we’re so grateful to God for protecting us. We ask everyone for prayers for rain, for the safety of ourselves and our neighbors, for those who have already suffered tragic personal loss, for all of the firefighters and for a swift end to the wildfires."