"I Just Want to Thank You for Praying With Me" 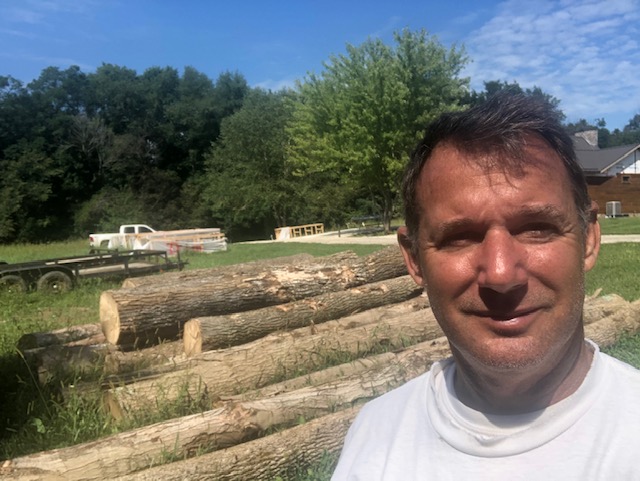 Dave Roth on his family farm.

As Dave Roth (Indianapolis) emerged from his camper on a recent Wednesday morning, still tying his boots, he noticed one of his contractors lying on his back in the driveway. Dave was on his family's black walnut tree farm and sawmill near Crawfordsville, IN, working on building a house for his brother. All the other builders were busy out of sight, behind the house.

Wondering if the man had had a heart attack, Dave rushed over and asked him if he was all right. “I threw out my back,” the man said. “It happens every 8-9 months. It locked up even though I wasn't doing anything strenuous. I was trying to make it back to my truck and go home, but I can't make it any further.”

The man, Dustin, said he had crawled on his hands and knees from the backyard to the front, all the while wailing in pain. He looked white as a sheet. Dave offered him some water and a Pop-Tart, and he accepted the water. At that point Dustin's boss came over and checked on him. When the boss returned to work, Dave said, “Dustin, you look like you're still in a lot of pain. Would you mind if I prayed with you?” Dustin immediately raised his arm up to Dave and said, “That would be awesome!”

Dave held Dustin's hand and prayed for healing, for God's power to go through his muscles, strengthen his back and lighten the load on his nerves. Dave asked Dustin if he could do anything else for him, but Dustin wanted to lie there a little longer and then try to get up. Dave went into the barn for about 15 minutes, and when he returned to check on Dustin, the man was gone.

Dave went back home to Indianapolis and didn't return to the farm until the following night. In the morning, Dave’s brother, Randy, who hadn’t been there when Dustin threw out his back, told Dave that Dustin had returned to work and wanted to thank Dave for his prayer. Later that day, during a spontaneous problem-solving meeting, Dustin made his way around six other men to shake Dave's hand. He said, “I just want to thank you for praying for me the other day. It immediately felt a lot better. By the time I heard you come out of the camper, all I was able to do was lie there on my back and look up at the clouds and pray. I didn't think I was going to make it off the job site that day, but I was able to get into my truck and then make it home. Your prayers really, really helped.” Dustin went on to say that the other times he threw out his back it took a week to recover.