A Massive Food Giveaway in Minneapolis and St. Paul

by Chris Meehan, with reporting by Elizabeth Pease

Servant Branch members distributed 40,000 pounds of food, along with masks, toiletries and games on a Saturday in late June. The distribution took place in a section of Minneapolis where some stores had been burned and others had been heavily damaged by the riots that followed the death of George Floyd, and on the West side of St. Paul, where the branch has an outreach.

Mike Stapp (Servant Branch) helped organize the effort. Several weeks ago, after seeing reports of the riots in the Lake Street area of Minneapolis on the news, he went to the area in person and found, along with still-smoldering buildings, a grassroots cleanup effort, with hundreds of volunteers carrying brooms and dustpans and picking up trash. Moved and inspired, he decided that he, too, could do something to help. He already had experience securing overstock items from large corporations and donating them to People of Praise outreach efforts.

After some research Mike found out that Food Rescue US, a nonprofit helping with coronavirus relief, had refrigerated semi-trailers packed with fresh carrots, potatoes, onions, apples, pears, grapefruit and more that needed to be emptied while the food was still fresh. Mike agreed to accept one semi-trailer with 40,000 pounds of produce to give away on Lake Street.

Meanwhile, Mike Wacker knew that Source Mn, a nonprofit organization with an outreach in the Lake Street area, had been distributing food in a K-mart parking lot there. Mike Stapp called Peter Wohler, a Trinity River Ridge parent and the director of Source Mn, and found out they were planning to distribute food from a second semi on June 27. They agreed to work together. 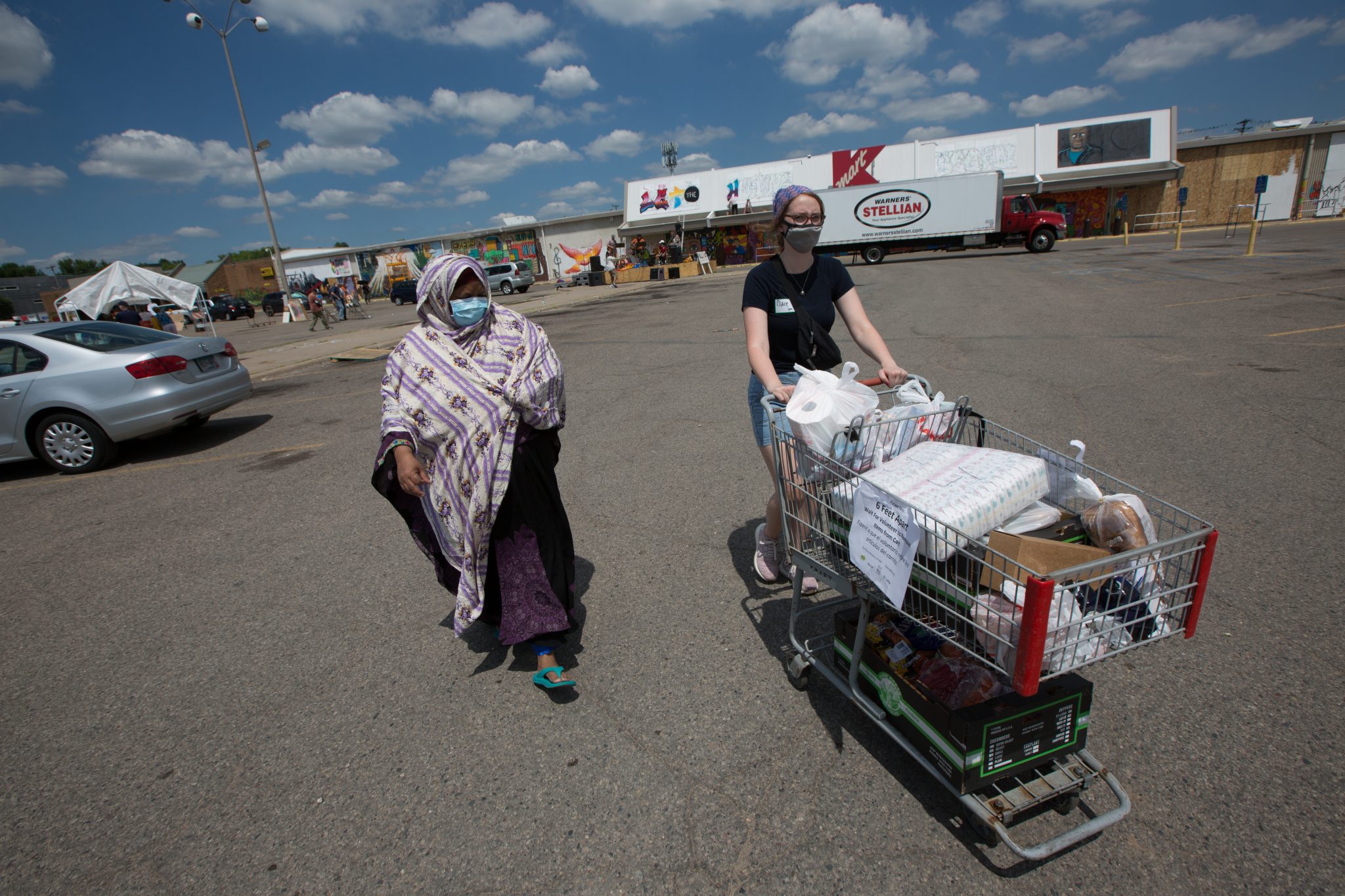 A volunteer helps a woman load groceries in the KMart parking lot. Photo by Dave Hrbacek.

With minimal publicity, Mike attracted around 20 volunteers: a mix of Action members, Action parents and branch members. On June 27, they joined dozens of Source Mn volunteers, among them several students and alumni of Trinity and their families, in the parking lot of a closed K-Mart that had been damaged by rioters. Many of them worked non-stop from 6:30 in the morning until 3 p.m. in the sweltering 90-degree heat. “Food distribution at the K-Mart lot didn't start until 11 am,” says Rebecca Brubaker, “but it took us several hours just to organize the crowd flow and food portions.”

“Simply emptying the truck of its contents was an achievement,” says Sam Claassen. “We had to remove 1,650 25-pound boxes of food stacked in eight-foot high shrink-wrapped towers. Several layers of boxes had to be removed from the top of each stack just to get them into the tents, where they were opened up and repackaged to smaller, more manageable sizes,” says Sam. “Some people walked there and had to be able to carry the food home.”

Mike had also connected with Bed, Bath & Beyond, who donated N95 masks, while other companies donated hair conditioner, soap and shower gel, antibacterial hand wipes and paper towels to give away. He was also able to get a few pallets of board games from Hasbro. “I loved to see the delight on the kids' faces when we gave them games,” says Meg McManmon. 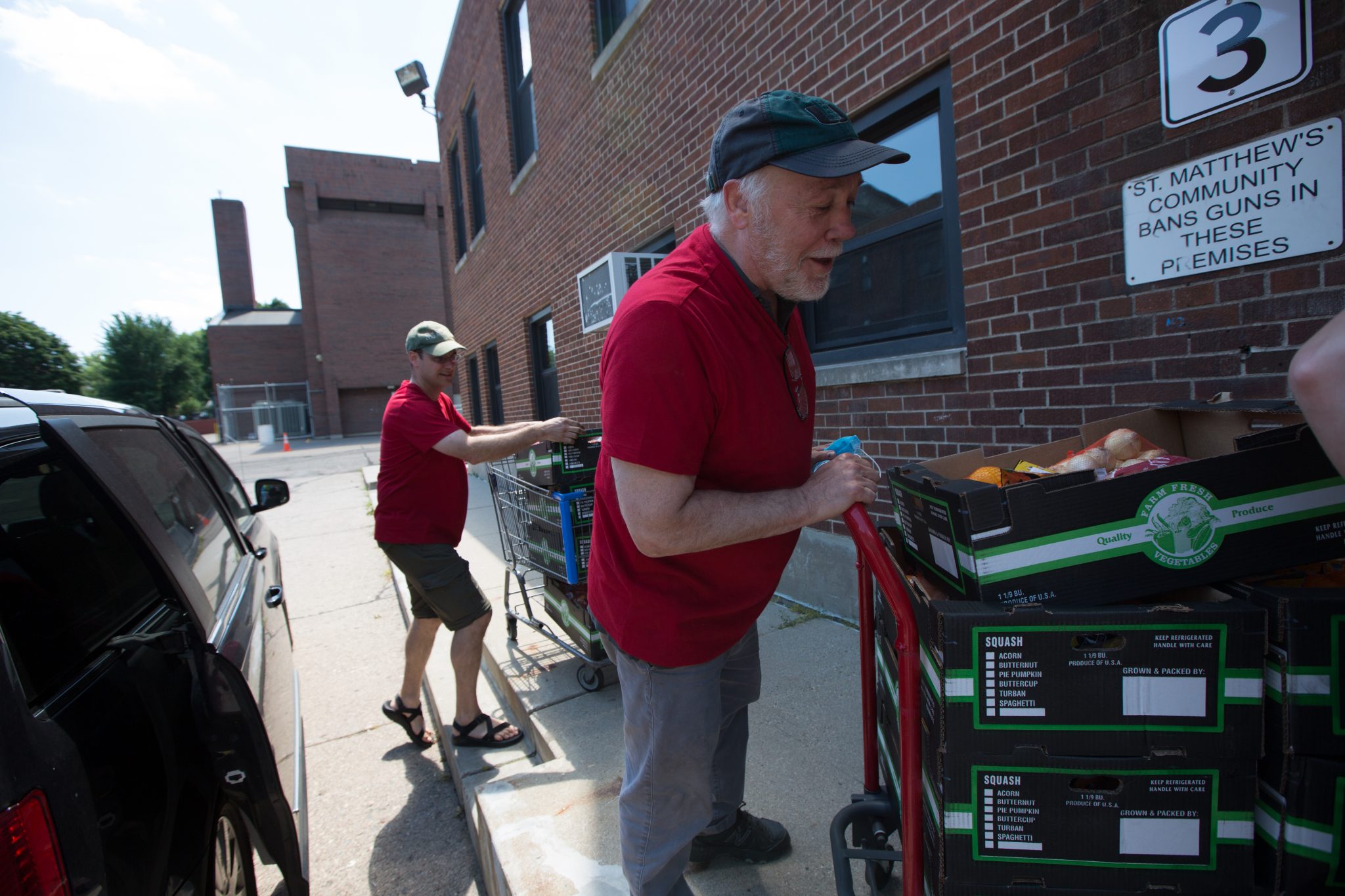 Mike Wacker and Pat Murphy load up carts outside 490 Hall Ave. on St. Paul's west side. Photo by Dave Hrbacek.

Mike worried that they would have a hard time giving away so much food in one day and the food banks, closed on Saturday, wouldn't be available to take leftovers, so Mike and Pat Murphy decided beforehand to distribute some of the food on the west side of St. Paul, on the two street corners outside 490 Hall Ave., the former convent which serves as the home of several members of the branch.  Though they had done little publicity, hundreds of people stopped and picked up boxes of food, some returning for more boxes for friends and neighbors.

Pat Murphy estimates they distributed over 400 boxes in St. Paul. Afterwards, volunteers took leftover boxes and distributed them  in their neighborhoods. Mike Stapp noted that they didn’t want to waste any food or leave any behind either at the K-Mart lot or at 490. “It was such a joy to be able to be so generous to so many people with such high quality food” says Meg. “That must be how our heavenly Father feels every day!