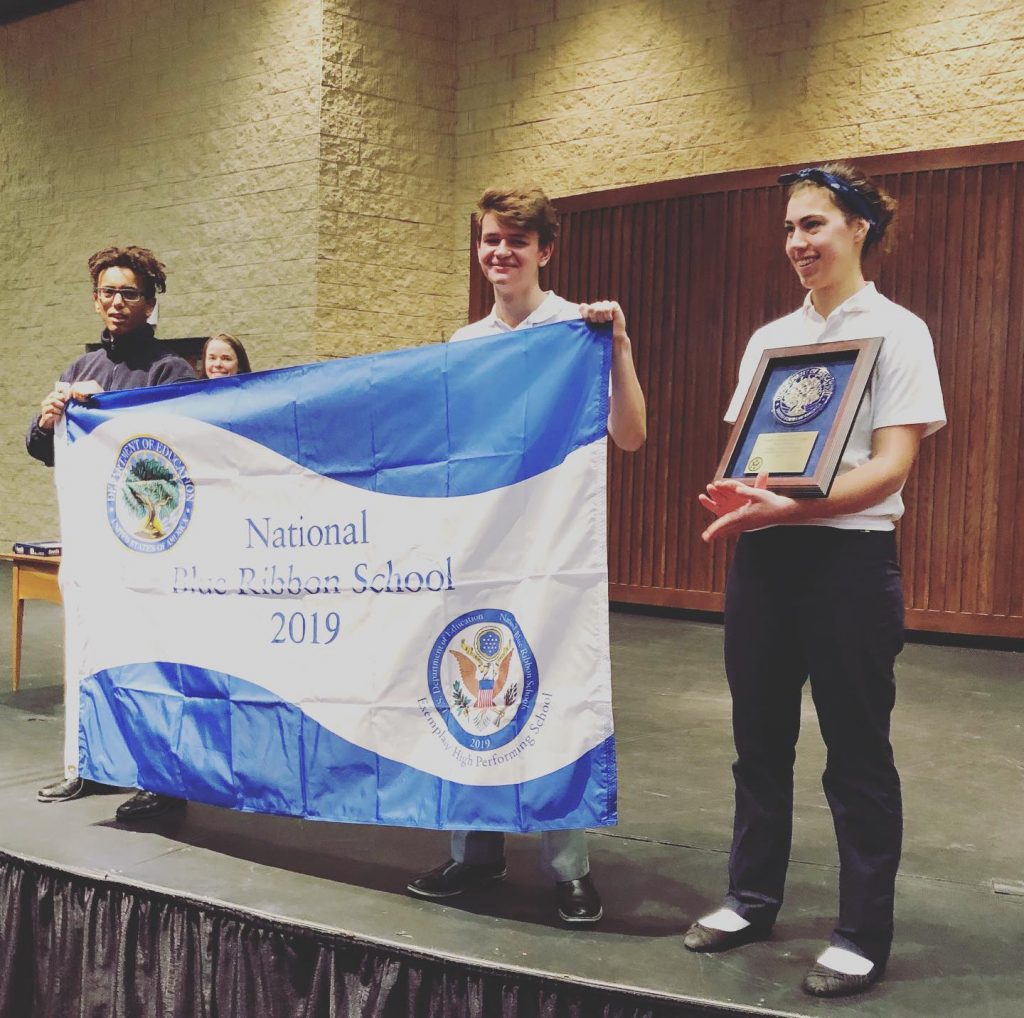 On November 15, at an awards ceremony in Washington, D.C., the U.S. Department of Education recognized Trinity School at River Ridge as a National Blue Ribbon school for the third time.

River Ridge was the only private high school in Minnesota to win the award in 2019. It’s also the only high school in the state to have earned three Blue Ribbons, and it was one of only 50 private schools in the United States to win the award in 2019.
This is the ninth time a campus of Trinity Schools has won the Blue Ribbon.
“The award is not just a recognition of the school and educational outcomes, but also a recognition of the hard work and dedication of the administration, staff, parents, students, alumni and many generous benefactors who form the River Ridge community,” said Jon Balsbaugh, the president of Trinity Schools.
The Blue Ribbon helps spread the word about the school to prospective parents. About 5,500 people viewed the school’s Facebook post announcing the award. That’s ten times the views any other post has ever received, according to Head of School Beth Schmitz.
“One of our goals as the People of Praise is to educate as many young people as we can in a ‘true and integral Christian humanism,’ as The Spirit and Purpose of the People of Praise says,” noted Craig Lent, the overall coordinator of the community and chair of Trinity’s board of trustees. “We hope that the Lord will use news of this award to help us attract more students to Trinity. We are so grateful to God who called us to open Trinity nearly 40 years ago and continues to sustain us and bless us.”
“Part of the reason we considered sending our kids to Trinity, when we’d never heard of Trinity, never heard of the People of Praise, was because it had just won its second Blue Ribbon,” said parent Christin Croll Carlson.
Christin hopes that the award can be a tool that will allow more parents to experience the blessing that Trinity School is. She says, “Parents need to know that this is out there, that you can graduate from high school without alcohol or sex. That you can learn to think for yourself. That you can hold your own in an argument. That you can develop manners, and intelligence, and still be a teenager. People don’t believe that this is possible. But it is.”
When the award was announced in September, Beth told the students during an assembly, “This award is an acknowledgment of excellence that for us is ordinary life. It’s appropriate that it’s ordinary because that’s what we’re created to do, but it does cumulatively add up to something that is extraordinary.”
And so the students and faculty ate cupcakes, celebrated their recognition, and then went back to their math problems and recorder playing and drama productions and spirited discussions and MATLAB programming—back to their ordinary work of learning together.