10 Things to Do at Servant Camp 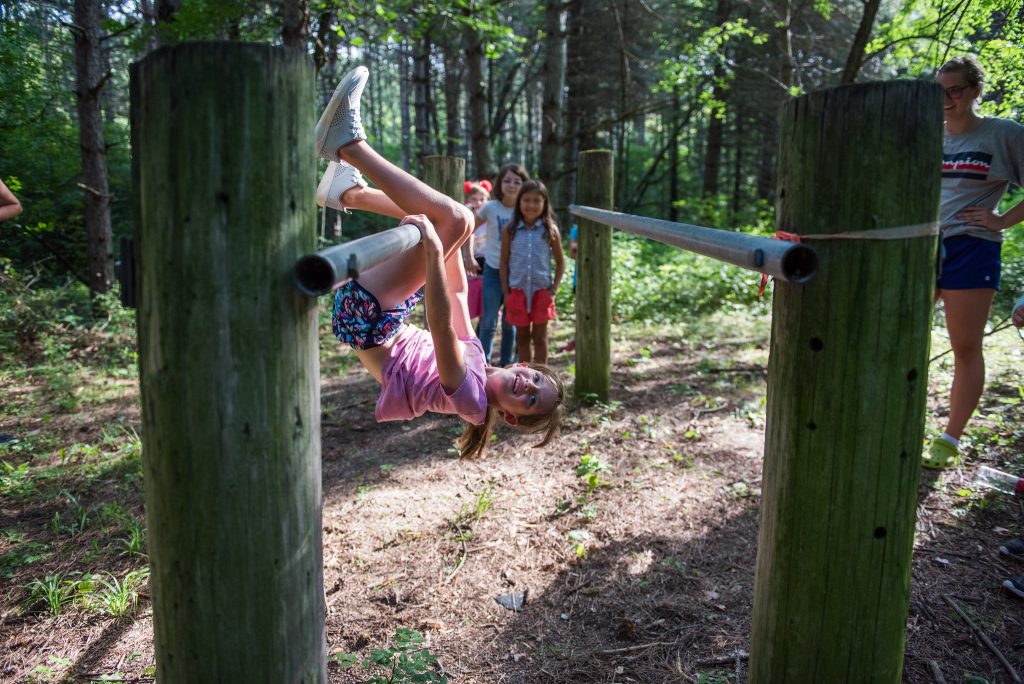 Third and fourth grade girls attempt to get across the poles without touching the ground. Photo by Andy Bowar.

Editor’s Note: I spent my first week at Servant Camp in August, serving as an assistant counselor for the third-grade boys, a.k.a. the Bears. These are my top takeaways.

1. WEAR THICK-SOLED SHOES. When I arrived at Phillippo Scout Reservation, fellow counselor Mike Wacker (Servant Branch) inspected my carefully selected thick-soled sandals (with socks, per the rules) and broke the bad news, “Sandals have to be closed-toe.” With just a little bit of a gleam in his eye, he showed off his Hoka running shoes, their soles as thick as a couple of peanut butter and jelly sandwiches. The pair of running shoes I had brought had extremely thin soles. I’ve run marathons, I figured, I’ll be fine. Wrong. By Wednesday I would be begging for mercy, strategically seizing every opportunity to park myself on the ground, and then feeling my feet ache late into the night. Gravel roads have a way of reminding you just how many nerve endings there are in each of your feet. It’s about 7,000. Trust me, you don’t want to learn their names.

2. GET COFFEE IN THE STAFF LOUNGE AT 6:00 A.M. Servant Camp runs according to certain predictable patterns and rules. Breakfast, lunch and dinner will each be followed by dodgeball for the boys. The metal snap hooks that connect the American and Canadian flags to the halyard will clang delightfully against the pole during a reverent silence. And my personal favorite: there will be coffee in the staff lounge at 6:00 a.m. Credit for the coffee goes to Bob Pintozzi, retired dean of boys at Trinity School at River Ridge, who rises at 5:00 to start the 100-cup percolator that he had prepped the night before. “It’s a great job if you want to be a hero,” he said. 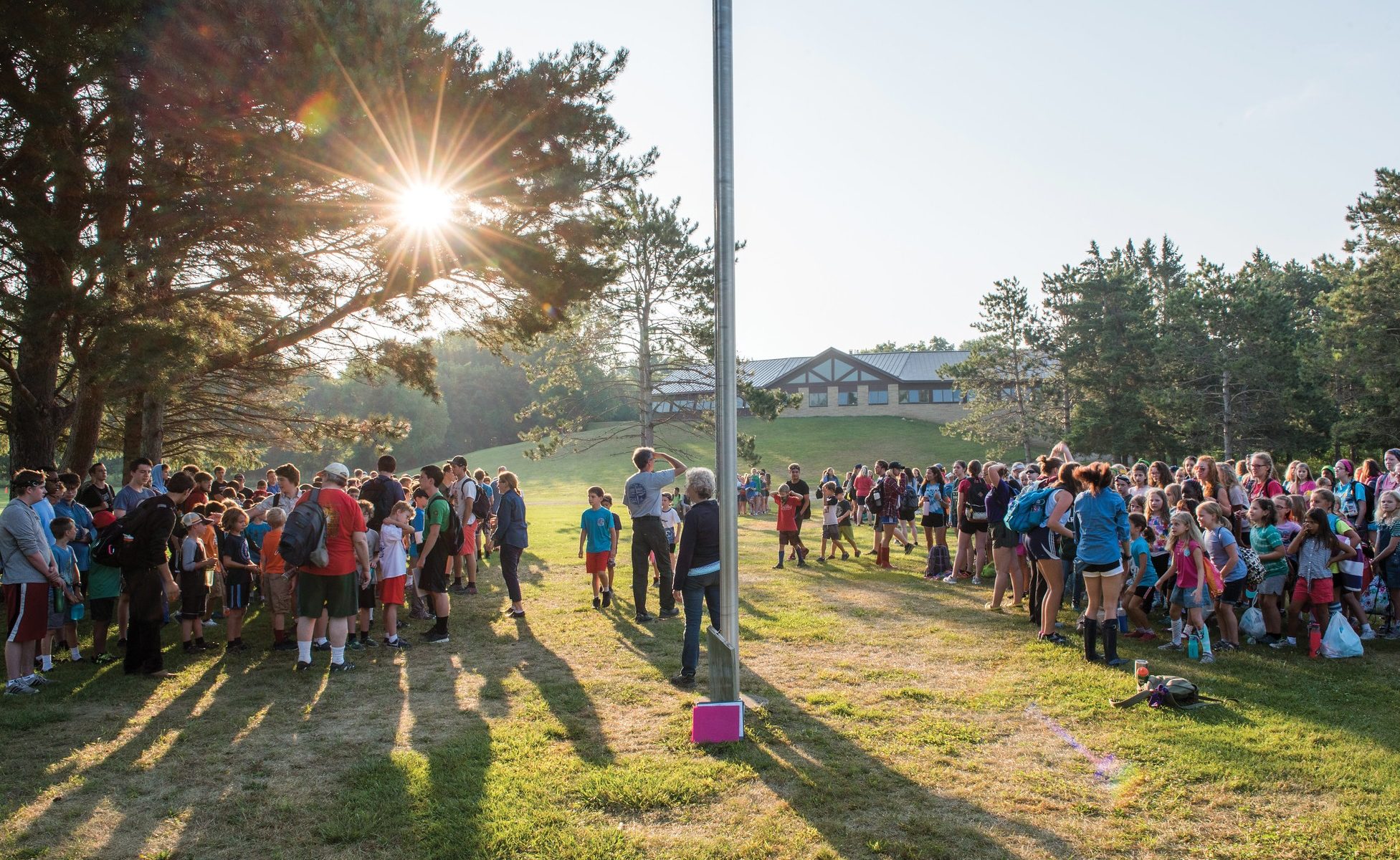 Campers gather every morning to raise the flag and sing. Photo by Andy Bowar.

3. DRINK WATER OR BE HOMESICK. Dr. Paul Zenker leads a medical team, with three nurses, who give out some 1,200 doses of medicine to the 400+ people who attend camp, the right dose to the right person at the right time. (One of the nurses, Becca Maslow, won an award for all the work she did analyzing and organizing data from the camp’s website to make this happen.) But Dr. Zenker’s biggest concern is water. “I will try anything to keep kids hydrated,” he told me. He explained: when a child is dehydrated, the body pulls water from the gut, creating the perfect conditions for clogged pipes. Young kids don’t like spending long periods in the outdoor latrines, so stomach pain can erupt. Dehydration also causes headaches. It’s these pains that get the young ones crying for mama. An elegant biological explanation with a clear bottom line: drink water or be homesick. Better yet, stop by the medical cabin a few times a day to get some free Gatorade. 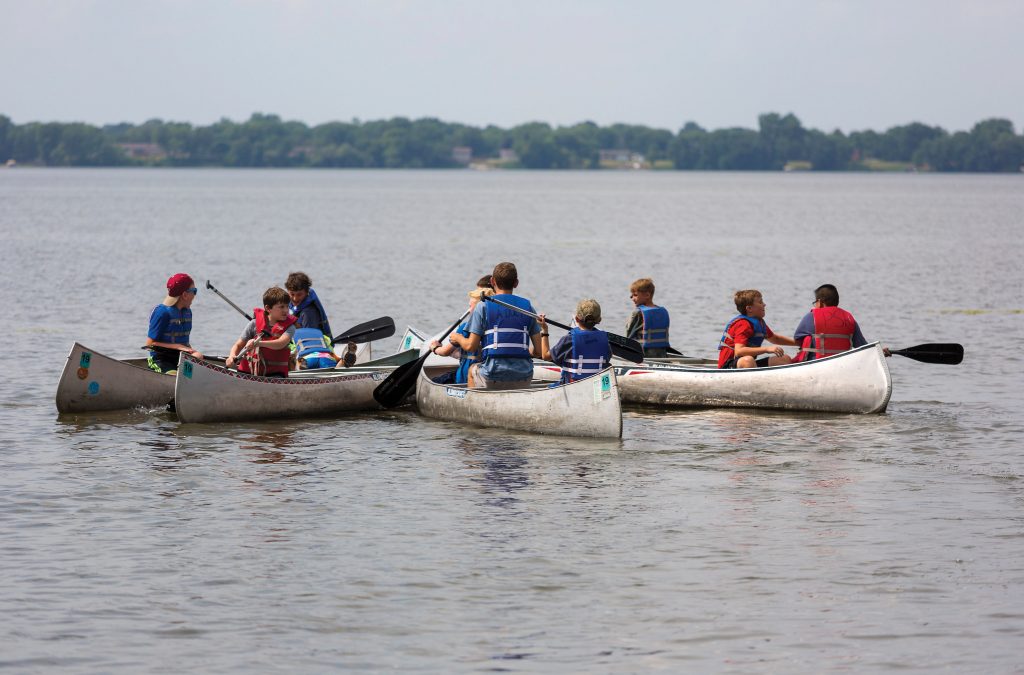 4. PRAY FOR AT LEAST ONE STORM. On Wednesday, our group of third-graders had to abandon plans for a hot dog cookout and hurry to the dining hall: a storm was brewing. As we arrived, we saw a shelf cloud forming outside. Inside the packed, noisy dining hall the atmosphere was electric, with hundreds of us crammed in and everyone talking loudly. Outside, the wind started whipping. The sky was darkening. I looked into the eyes of our third-graders, seated in a row on their usual bench, and saw fear. Then the junior counselors started leading everyone in “I’m a Little Teapot,” usually a gentle tune, but this time done to the rhythm of the stadium classic, “We Will Rock You.” Soon everyone was slapping thighs, pounding tables and clapping hands, and the boys had relaxed. Down in the basement, we started a game of four square and, when that petered out, a game of basketball, with junior counselors serving as hoops. Eventually, we got called up to dinner. By the time we were through, the storm had passed, leaving a glorious effect: cooler temperatures.

5. WALK A MILE IN SOMEONE ELSE'S SHOES. After an epic pillow fight in our third-grade boys’ cabin, all the boys’ clothes got tangled together. Jimmy couldn’t find his shoes anywhere. This nightmare scenario was relieved when another boy, T.J., suggested that Jimmy wear T.J.’s shoes—a gesture that allowed us to leave for the swimming pool. Later that afternoon, Jimmy found his shoes. On Peter’s feet! Peter and Jimmy swapped shoes and Peter wore T.J.’s shoes back to camp. All of this proves the point that if you really want to get to know a brother you should walk a mile in his shoes. At Servant Camp, it’s possible. 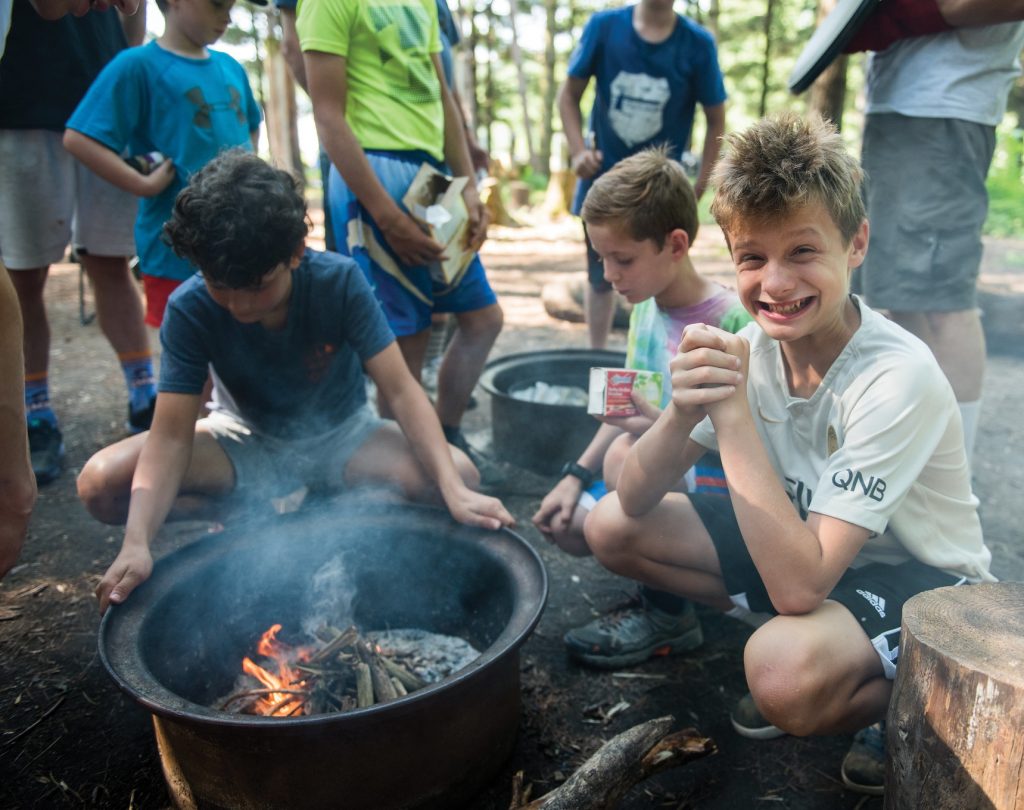 Almost every meal-time one or more age groups were out making and consuming their own grub outside. Photo by Andy Bowar.

6. SHOOT THE CHUTE. There were precious few moments during the week when the attention spans of the eight-year-old boys stayed focused on a single activity, but that’s what happened when we made the trip to the two side-by-side sledding chutes. These are corrugated black plastic pipes that run down a steep hill. Campers grab a long plastic sled and crash helmets and whiz down the hill. For added fun, you can stack 10 or so of the extra sleds beneath the plywood at the bottom of the chute to create a ramp. Bonus: if you’re willing to do the hard work of peddling a go-kart up the hill that leads to the chute, you can have a heck of a good time riding it back down the hill once the sledding time is over. 7. HIKE TO FRIENDSHIP POINT, BUT NOT RIGHT AWAY. The hike up to the lookout known as Friendship Point takes ten minutes if you’re with high-school students or about an hour if you’re with eight-year-olds and take a wrong turn. But the view is worth the effort: a panorama of Lake Byllesby, a four-mile-long man-made lake, with hawks and an occasional eagle soaring above the trees, and a view of the camp below you. The boys ate goldfish crackers and balanced on round wooden posts that let you get up a bit higher to see the view. We listened to “Revive this Land” on a portable speaker, and, though we didn’t say much, a sweet feeling set in among us. After surviving epic squirt gun battles, bouts of homesickness, dodgeball games, a storm and long nights in a sweltering cabin, we had become something more than a group of boys from four different states. We were a true pack of Bears, comfortable in our own skins. 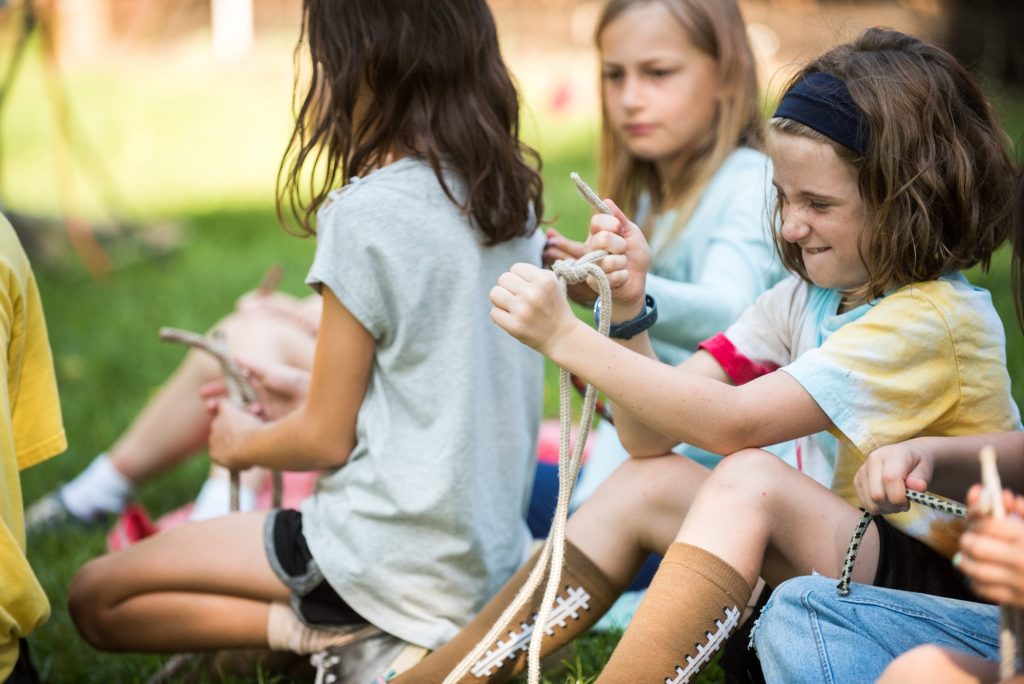 8. LISTEN TO THE RHYTHM OF THE FOOTFALLS. On the final night of camp, all the units, dressed in their new camp T-shirts, form up into a procession. Counselor Chris Schwab stands at the front, carrying a djembe, and four torch bearers line up behind him. Chris intones a rhythm, boom-boom-boom-ba-boom-boom-ba-boom-boom, and the marching begins. Four hundred pairs of feet crunch in unison over the gravel road, then swish loudly over a grassy field, then beat softly over dirt, then crack resoundingly through a concrete tunnel, until finally they enter the amphitheater where each unit takes its place. The drum continues its rhythm and singers lead everyone in the Servant Camp song (to the tune of “Scotland the Brave”). “Glory to Almighty God who gave us Servant Camp,” the camp intones, as rays of orange light from the setting sun filter through the pine trees behind the stage. 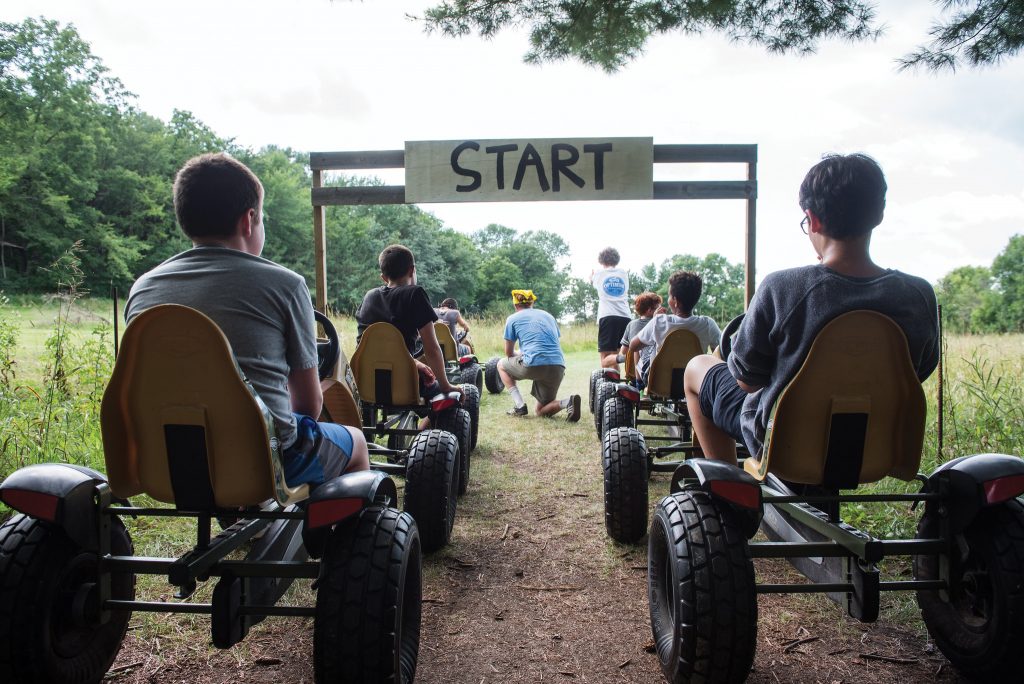 One of the most popular activities at camp is the pedal go-kart track. Photo by Andy Bowar.

9. SING YOUR HEART OUT. Servant campers are always singing. There are silly songs like “The Cat Came Back,” about an unkillable cat who survives numerous attempts on his life: shotgun blasts, a fall from a hot air balloon, even a nuclear apocalypse. In the morning, there are chants which often begin with: (Leader) “This is a repeat after me song.” (Crowd) “This is a repeat. . . .” You get the point. But best of all are the praise songs. One of my favorite moments came as our group was walking back to our campsite with the sun setting, the moon rising, and the sounds of “10,000 Reasons” (“Bless the Lord”) reaching our ears from the amphitheater more than half a mile away. At the closing ceremonies, the praise songs are loud and go late into the night, and as far as I know those hallelujahs are still being raised through the woods and fields of Camp Phillippo. 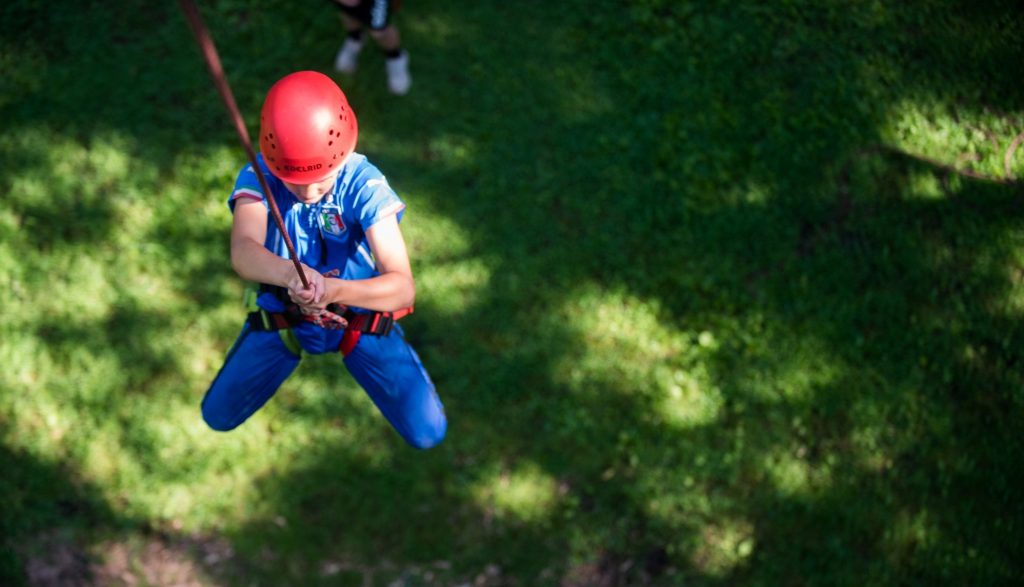 A brave camper belays off the climbing tower. Photo by Andy Bowar.

10. FALL ASLEEP LISTENING TO BIBLE STORIES. Each night the Bears fell asleep to the sounds of our unit’s head counselor, Pat Flynn, a.k.a. Papa Bear, reading stories from the Jesus Storybook Bible. He takes requests. If you are going to sleep at Servant Camp, this is the way to do it.