In 12 Hours, Back from the Brink of Death Twice 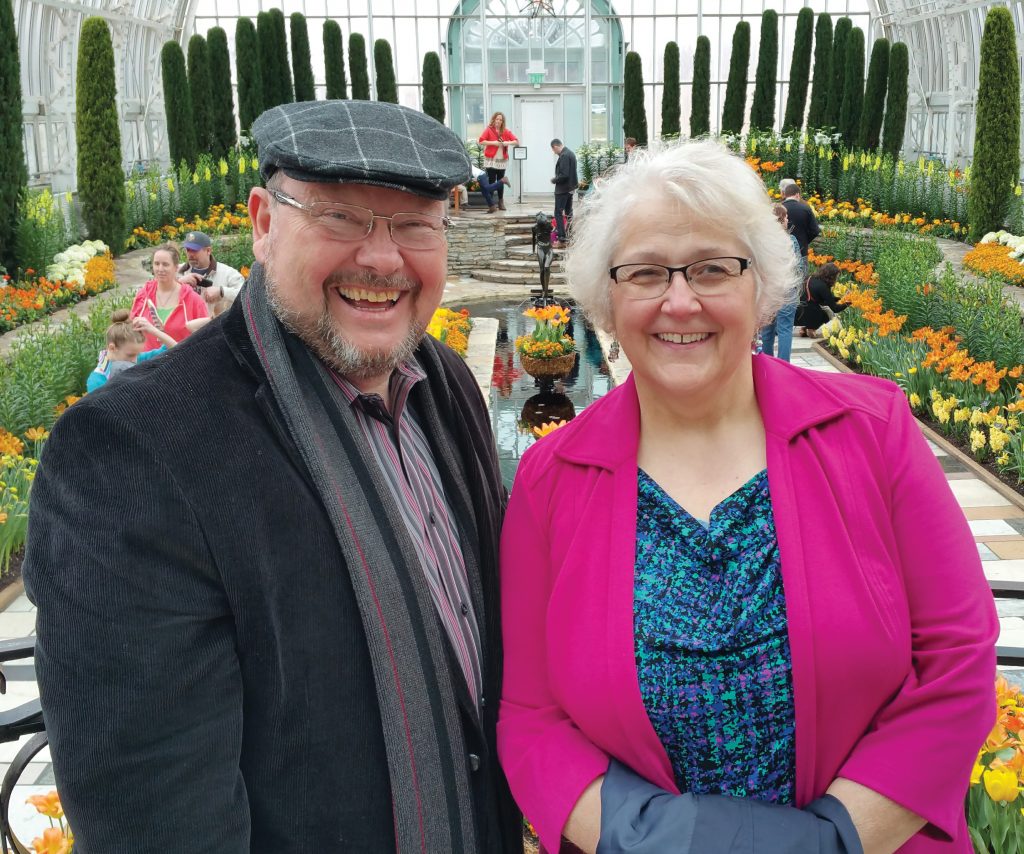 Ed and Phyllis Varevice.
by Chris Meehan
At 11:25 a.m. on January 15, 62-year-old Ed Varevice (Servant Branch), a property-tax management consultant for the Minnesota Department of Revenue, was walking with several coworkers on a downtown Minneapolis sidewalk in the middle of an ordinary workday when he collapsed. He lay unmoving on the sidewalk, not breathing. He had suffered a cardiac arrest.
One coworker quickly called 911. Another knelt and held his head up off the sidewalk, while a third found a sheriff from city hall across the street.
At 11:32, seven minutes later, paramedics arrived and started chest compressions and rescue breathing. They shocked his heart with a defibrillator. An ambulance transported Ed to Hennepin County Medical Center four blocks away.

About 12:45 p.m., an emergency room doctor warned Phyllis, Ed’s wife, that brain damage was a possibility for Ed since his brain had been deprived of oxygen for longer than five minutes. The medical plan was to induce a coma. It would allow Ed’s brain to heal but, as Phyllis recalled, the doctor said he couldn’t predict what the outcome would be “if he wakes up.”
Instead of moving Ed directly to the ICU, the doctors sent him to a lab for some testing because he’d been randomly selected to participate in a medical study. The cardiologist reported that they had found a blockage in Ed’s left anterior descending artery and inserted a stent. His artery had been 80-90% blocked. They moved him to the intensive care unit and started injecting him with saline to cool his body temperature and induce the coma.
Soon after that, about 5:00, Phyllis and her daughter Anne Varevice, along with Bernie and Louise Schwab, prayed with Ed. By 8:00 p.m., the hospital staff encouraged Phyllis and other family members to go home for the night and get some rest, since Ed might be in a coma for several days.
Phyllis was driving home when the hospital called. Ed had experienced a second cardiac arrest, but the hospital team had managed to revive him. Phyllis was terrified, but she recalls thinking, I’m not going to give up hope now. She says the staff told her that the stent they put in earlier might have saved Ed’s life.
About 9:30 p.m., the doctors decided to allow Ed’s body to warm up, since the cold treatment was making his condition unstable. Phyllis, back at the hospital, asked Anne to contact Principal Branch Coordinator Tom Caneff and ask him urgently to come to the hospital and be with them. During Tom’s 45-minute stay after 11:00 p.m., he and the family prayed over Ed three times. “I think Ed is going to come back to us,” Tom said.
Phyllis spent the night praying and dozing at her husband’s bedside. At about 5:00 a.m., she clasped Ed’s hand and noticed that it had warmed up. The doctors who came into the room around 8:00 said that they were going to try and wake Ed up.
Almost immediately, Ed opened his eyes and swallowed. He listened to the doctors and responded well to their directions. Soon he was sitting up in bed talking, smiling and laughing. “It was wildly wonderful,” Phyllis recalled. “The doctors were flabbergasted” at the speed of his restoration.
Over the next few days, Ed’s most obvious symptom was a loss of short-term memory. “It seemed like every five minutes he would ask us what happened and someone would have to tell the story once again,” Phyllis said.
By the following Saturday, five days after the incident, he had recovered sufficiently to be released from the hospital.
Three-and-a-half weeks after collapsing on the sidewalk, Ed returned to work.
Dr. Paul Zenker, a Servant Branch member and emergency room specialist who was at the hospital during parts of Ed’s stay, noted, “Ed’s follow up echocardiogram was totally normal and showed no evidence of heart disease. Brainwise, he had a normal MRI and was neurologically normal—even though there had been signs that brain damage was a definite possibility.” To ensure the ongoing health of his heart, Ed now has a defibrillator and pacemaker.
A few months later, Ed joked that he was “up to 85% capacity,” but he wasn’t sure he ever did have that 15% (which proves he’s back to normal, according to Phyllis).
Ed reports that he remains humbled and amazed by the whole episode. He’s been able to share his story, and plans to share it at an upcoming national Christians in Commerce conference. He keeps in touch with one of the EMTs from the ambulance ride, who told him that his recovery had restored his faith in the Lord. Ed says, “God has gotten some mileage out of this!”
Phyllis says, “Ed was like Lazarus emerging from the tomb. The Lord saved Ed’s life two times and gave him back to us. My heart is full of gratitude and praise.”