Brotherhood is the Best Medicine 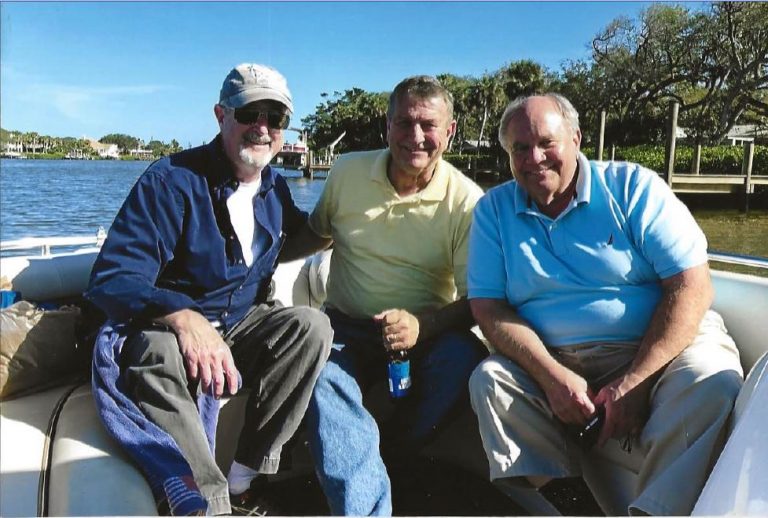 Jim and I met in the early 1970s while attending the Wednesday night prayer meeting held at Christ the King church in South Bend. A month or two after we met, Jim said he was looking for another place to live. I told him that I had a house and that he was welcome to move in there, and he did.

Jim had an old English sheepdog, the kind you can’t tell the front from the back because of the long hair. The dog had been through obedience school, and one of the tools used in training was a little squirt gun. To deter a behavior, they’d spritz a little water on the dog’s nose. One day, Jim and I had a meeting to go to, so Jim asked my brother Greg if he would watch the dog. Jim put the dog on his chain and mentioned something to Greg about watering the dog’s face if he should start barking, since Jim didn’t want the dog to annoy the neighbors. We came back and Jim asked Greg how things went. “Just fine,” he said. Then we looked outside. It was a sunny February day and we saw the dog with a smile on his face, staring right at us with his hair straight back in frozen icicles. I think Jim forgot to mention the part about using the squirt gun instead of a tumbler.

Jim and I eventually joined the People of Praise and we were asked to move into a Christian household. We lived with Andrew and Beryl Plodowski in their beautiful home on Angela Boulevard, with their son John and with Kay Frey, a schoolteacher and also a member of the community. Jim and I had the whole finished basement to ourselves, complete with room for prayer and a Ping-Pong table. We played every night. We discussed all the world’s problems and, as far as we were concerned, we solved every one of them—just no one ever came to ask our opinion. It was at the Plodowskis’ house that Jim picked up an endearing phrase. He would hear Andrew refer to Beryl as “My love,” or “Love.” Jim, throughout his entire relationship with his wife Jeanie, always referred to her as “Love.” 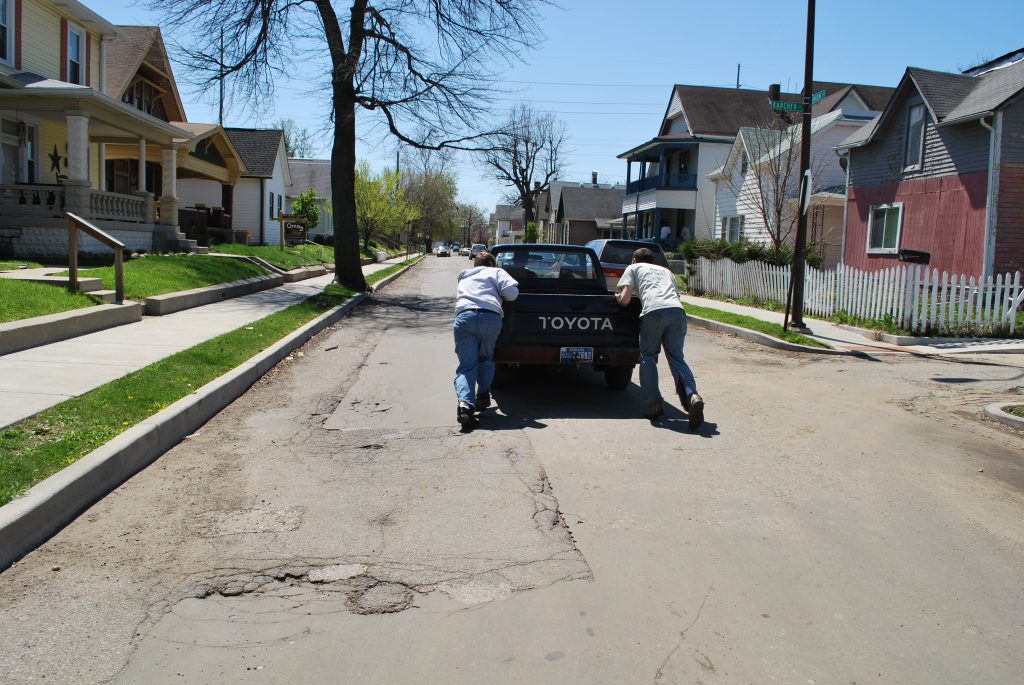 David Bowar (left) and Michael Coney (Mission, Indianapolis) give a truck an assist in starting on the South Side of Indianapolis in 2009.

One of the biggest things Jim and I had in common was laughter. We went with a group of friends to a Pink Panther movie. There was a scene that was so funny, we started laughing louder and louder. The punch lines kept coming, one after another. We couldn’t catch our breath. We slid out of our seats onto the floor, laughing, hoping it would stop, because we couldn’t keep up. I found out later on that our laughter had been a bit contagious, because, as we were told, the rest of the theater got to laughing more at us than the movie.

One evening we went to the grotto at Notre Dame. We wanted to pray for our future wives, whoever they would be. It wasn’t until quite a while after, and when we looked back, we realized that within a week of that prayer we had both met the women who would eventually become our wives. I met Kathy and Jim met Jeanie.

Kathy and I got married in 1976 and Jim and Jeanie got married in 1977. Years went by and children started coming. Jim and I both passed the real estate broker exam and started working at Cressy and Everett. We even bought an investment property to fix up and resell to keep shoes on the kids and food on their plates. It was a tough time because interest rates were in the teens. We learned a very important lesson during this time involving a house listed for sale for $28,500. Jim and I were prepared to offer $25,000. We discussed it with my dad, Clem Miller, who had been a realtor for as long as I can remember. He went with us to look at the house, suggested we offer them $6,000. $6,000? What? When we saw he wasn’t kidding, we offered them $6,000. They countered back to us at $7,000. We bought it and we ended up making just a little bit of money for our effort. But we would have lost a huge amount without this advice.

Jim moved on to work as a salesman, then later asked me to join him in making some furniture to sell. He bought all kinds of woodworking machinery and then moved it into my garage. Anything to make a buck, and the kids kept coming!

Of course, with lots of kids, things happen. Jim would get to laughing about some of the things parents experience. I said to him, “You mean like the time one of my kids decided he wanted to practice driving a car, and he took out the basketball pole that was mounted in cement.” Jim would quote Bobby Bowden, the Florida State football coach. When Bobby was asked about some of his athletes who were suspended for academics, or others arrested for various reasons, he would say, “Yes, yes, that’s right. That’s true. But they’re good boys!”

Jim was diagnosed with cancer on November 20, 2017. Even during his chemo treatments and surgeries, he never lost his sense of humor. I remember that on the day he was diagnosed Jim said he was wondering if there was golf in heaven. Someone whom I won’t mention said he heard there was good news and bad news about that. The good news is “Yes, there is golf in heaven—beautiful golf.” The bad news is, “You have a tee time tomorrow at 8:00.” Jim laughed so hard at that. The nurses must have wondered what was going on down there. That was Jim.

The spring of 2018 came and things got busy. Jim was still employed, delivering RVs across the country, plus going for chemo, having surgeries and squeezing in as much golf as possible. One highlight for me was riding with Jim and his good friend and head Bob Thomas to Jim’s many doctor and clinic visits. Bob and Jim have been very close for decades, through all the ups and downs. I was blessed to get to know Bob better along the way. Bob and his wife Kathy were always there for Jim and Jeanie.

Jim loved golf. I think we were on the course about 25 times from the end of April to early September, and when Jim couldn’t really golf after his surgeries we devised a chip and putt competition. We each had three balls we could chip up towards the hole on the putting green and proceed to put one in to see who could do it with the least number of strokes. 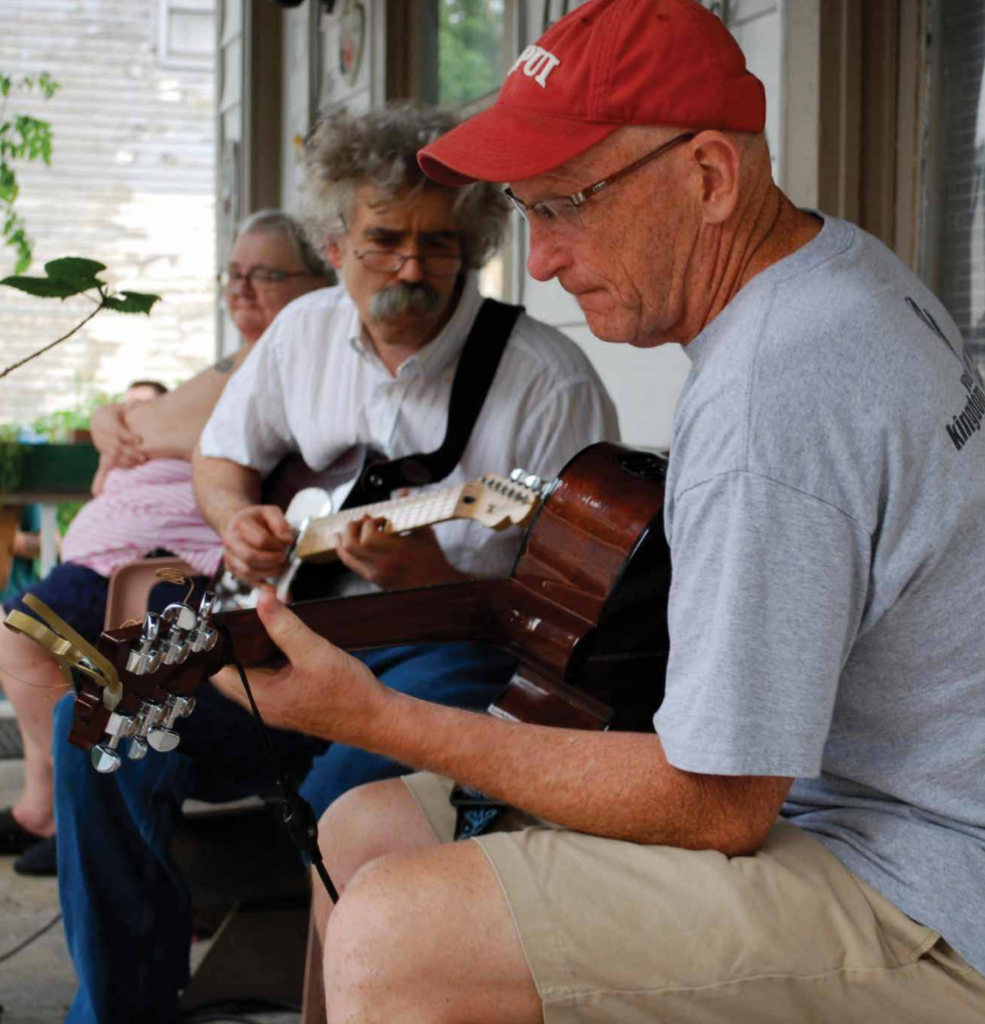 I got a call from Jim on the morning of November 6, election day. He said he wanted to go vote. I couldn’t believe it, but I picked him up and took him. He used his walker to get inside, voted and then he had me get the wheelchair to take him out to the car. I dropped him off at home. I was going to tell him later, but I forgot, that after I took him to vote I went to my own polling station to vote and cancelled his vote out! I know he would have laughed at that.

Jim tells the story of how, when he was young, he almost drowned after falling out of a boat into a frigid lake. At that time, he said he was not particularly a praying man, but he talked to God, and God sent a boat to rescue him, saving his life and the lives of his friends. I believe Jim knows more fully now how much our prayers are answered. And he would be the one to encourage us to take consolation in our faith and trust that the Lord never, never leaves us alone.