A House Fit for an Architect 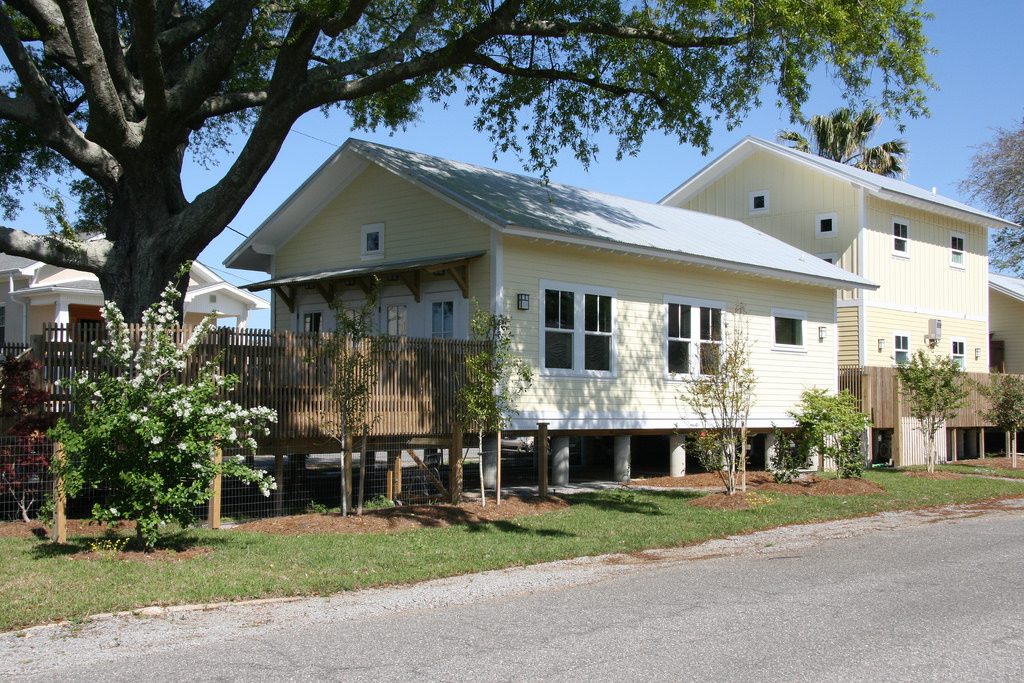 [Editor's Note:  Our brother in Christ, Bill Argus, passed away on November 27, 2018. We're republishing this article from Summer 2010 here in his honor.]

By Sean Connolly and Chris Meehan

The fate of the shoemaker’s children is to go barefoot, the car mechanic usually drives a beater, and the architect’s family . . . well, they live for three decades in a cookie-cutter home, with every day a frustrating tribute to just how unimaginatively walls and a roof can be arranged.

Those days are finally over for the Argus family (New Orleans). After Hurricane Katrina wrecked two homes his family owned, Bill Argus, an architect for 43 years, saw his moment to make up for all those years of “boring.”

He spent two years designing a long and narrow home that is really three cottages back to back to back, connected by covered walkways. They stand on a narrow strip of land—like a median—between two streets in western New Orleans, on a lot that is 260 feet long but just 34 feet across at its widest point. Drivers on Catina and Wuerpel Streets sometimes slow down to gawk, or park and drop in for a tour. 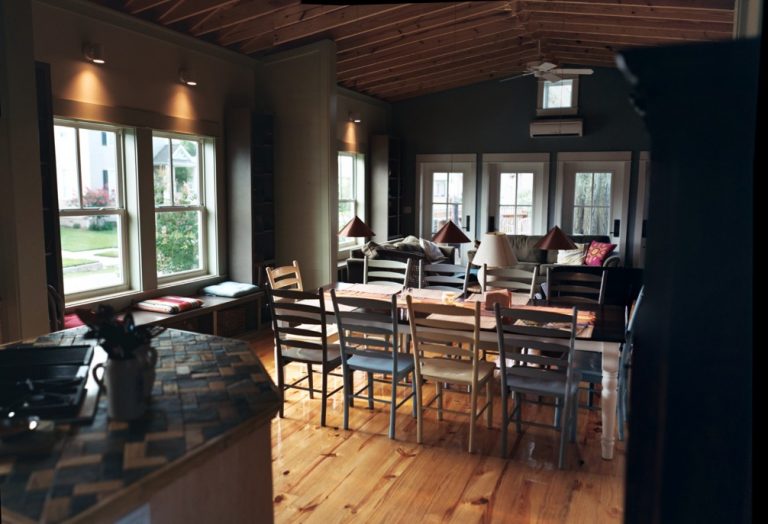 Years ago, Bill and Tucky had both noticed the odd-shaped parcel. When they finally had their chance to build, it was the only spot they could agree on. “I relished the challenge of creating a house in that space that didn’t look monolithic,” Bill explains. By designing their new home as three cottages, Bill avoided what would have been a very long and probably unworkable dwelling, and the odd-shaped parcel became a usable spot for a home. 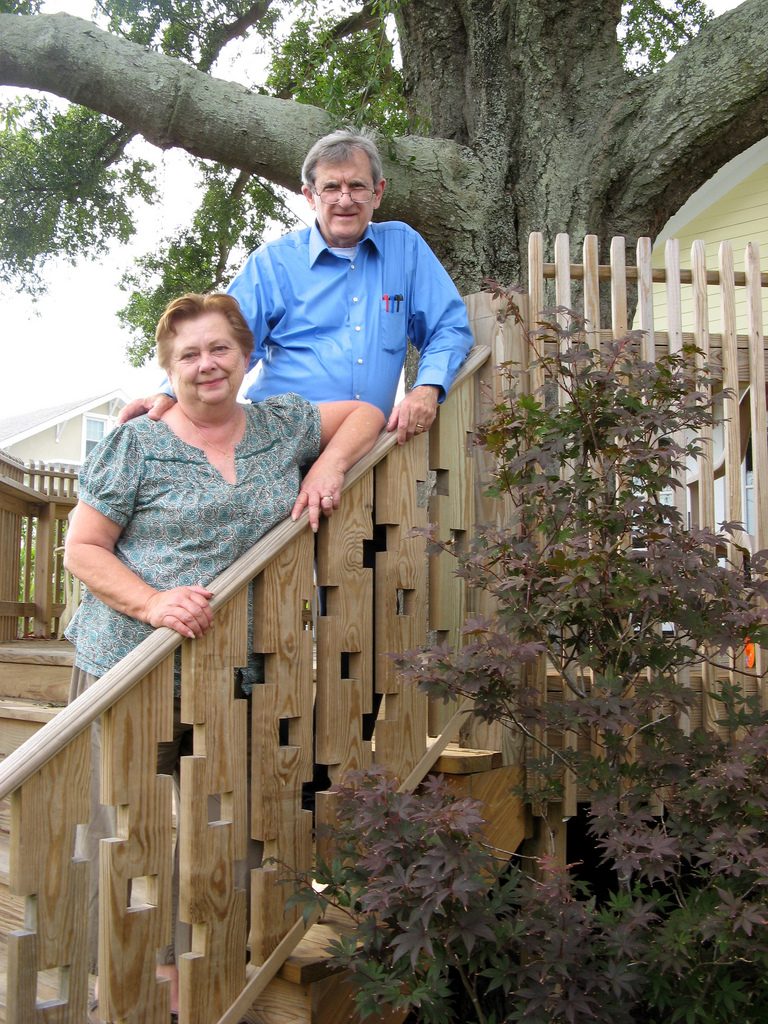 Bill is a firm believer in natural light, and this belief determined the size and placement of the 36 windows. All the rooms have windows on at least two sides, and the loft in the sleeping cottage has windows on all four sides. It’s possible—if you can spare the time—to chart the path of the sun from rising to setting through the living room windows. “It’s wonderful to sit in the living room with its 180-degree view of the sky,” Tucky says.

Just in case there’s another hurricane, all the windowpanes are built to survive wind gusts of 130 m.p.h. 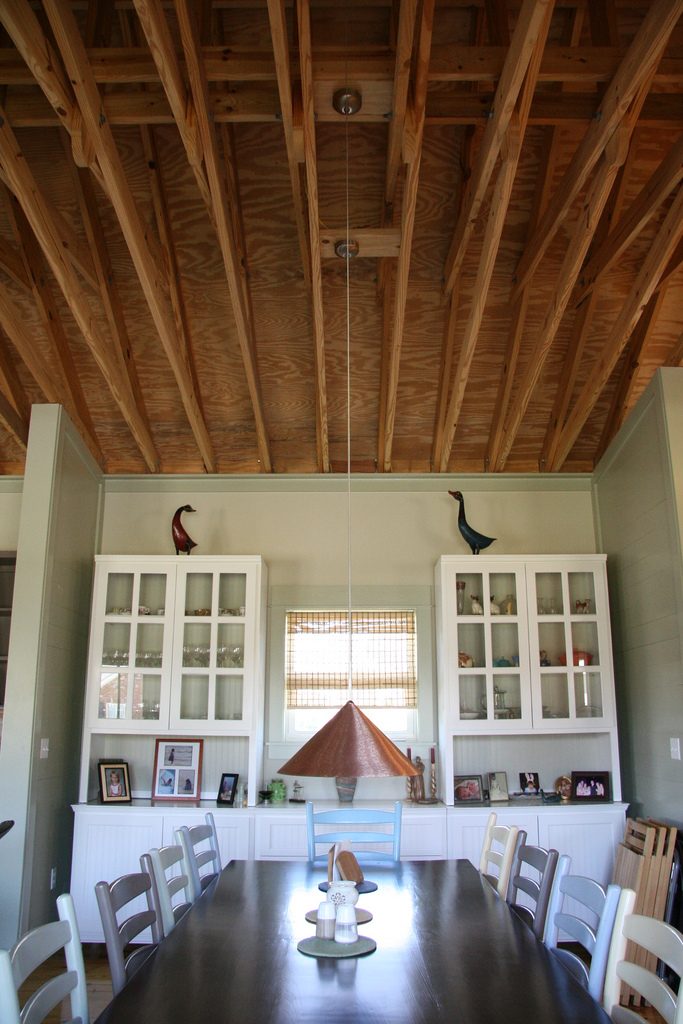 The dining room has an open and airy feel, but low-hanging lamps provide a more intimate ambience during dinner.

The front cottage contains a seating area, a dining area with a table for 10 and a kitchen with an island. Across a 13-foot covered deck, the middle cottage includes a study, seating area, master bedroom and laundry area on the first floor. A spiral staircase leads to a loft with four beds for guests and grandkids, a bathroom and a closet. The back cottage includes a bedroom, bath and kitchenette, with a carport and tool shed behind it.

Outside, gravel paths wind through a spacious garden that is Tucky’s playground. (Their old house had little space for gardening.) Camellia bushes bloom in winter, crepe myrtle blooms in the summer and there are three fruit trees (fig, avocado and lemon). 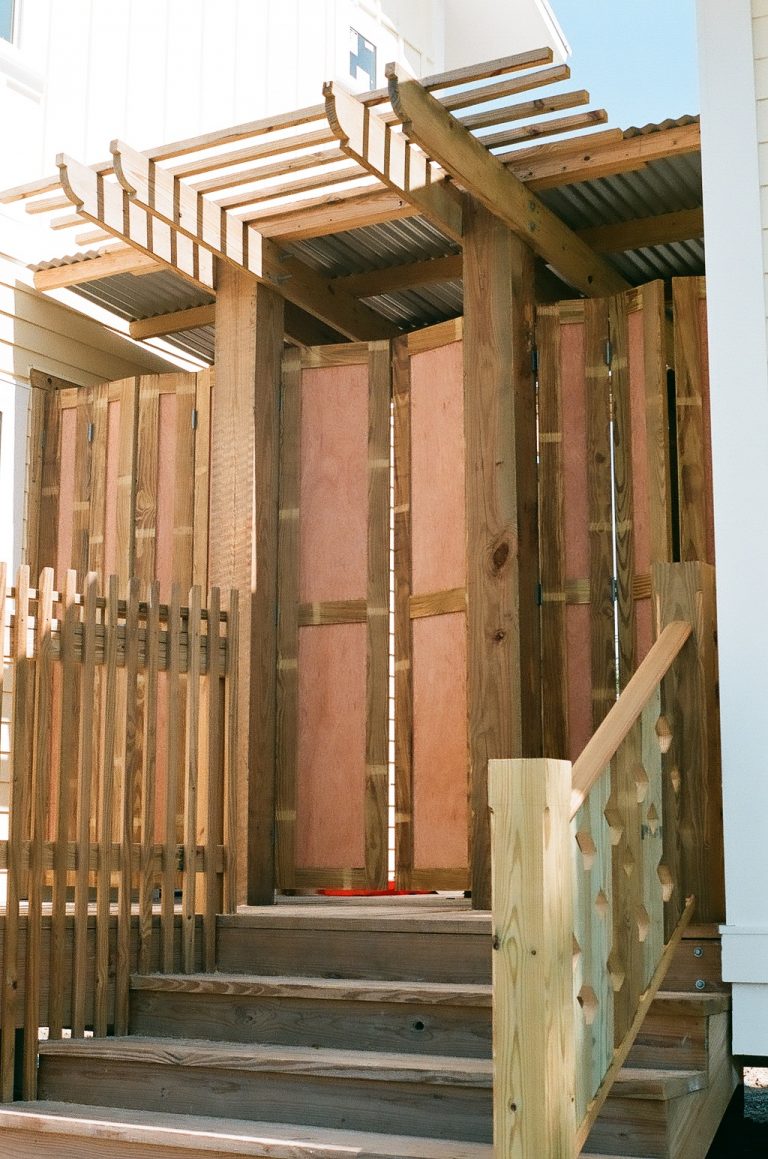 A walkway between two of the three cottages that comprise the house.

“Now I can set aside a place just for my fall bulbs, the sweet peas and the pears,” Tucky says.

It might come as a surprise that Bill has designed only a few houses during his time as an architect. (He’s designed about 15, including our row of houses in Allendale.) Instead, he’s focused his efforts on churches, schools and other buildings for large group gatherings. Still, he sees a connection between this relatively small job and his larger designs. “A church is basically a house—a home for the body of Christ,” he says. “Similarly, a house of committed Christians is something like a church.” 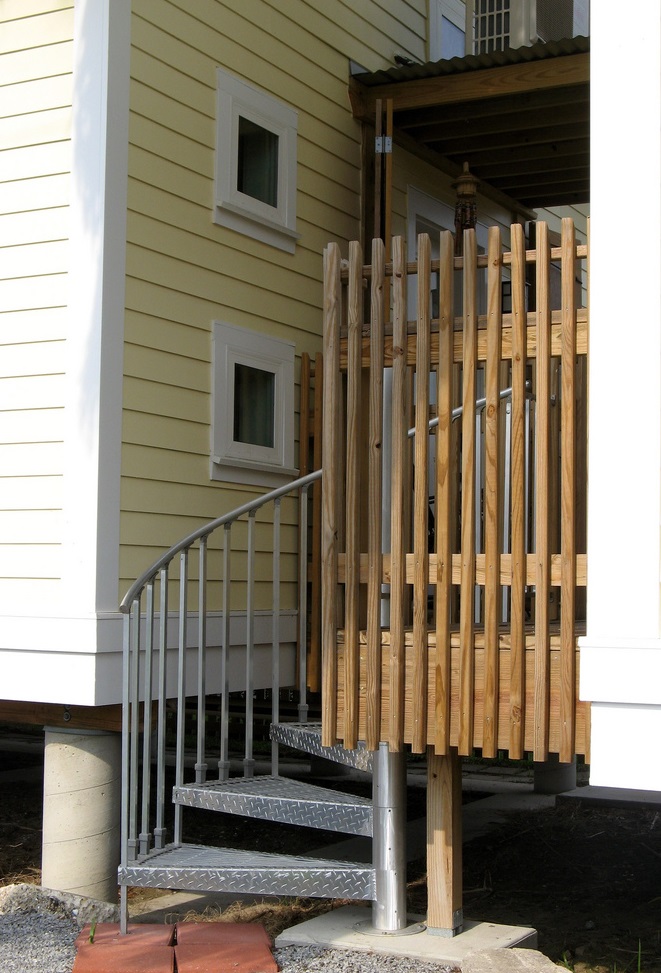 Bill used pickets on outdoor deck rails to provide privacy but still allow people in the house to see the street.

His creation continues to evolve. For example, he has plans to add privacy shutters to the walkways between the cottages. He also imagines adding a model railroad—a G scale miniature train with cars 30 inches long, 8 inches wide and 10 inches high—running on a track that will pass through Tucky’s elaborate gardens, and loop from the back of the house to the front. “It’ll add to the whimsy of the place,” he says with a laugh.

Tucky adds, “I’ll often stand on the deck and look up and down the yard, overwhelmed at the generosity of God and the talent he gave my husband. It’s a trip, watching people drive by very slowly and then calling out ‘I love it.’”