The One Who Wrote Back 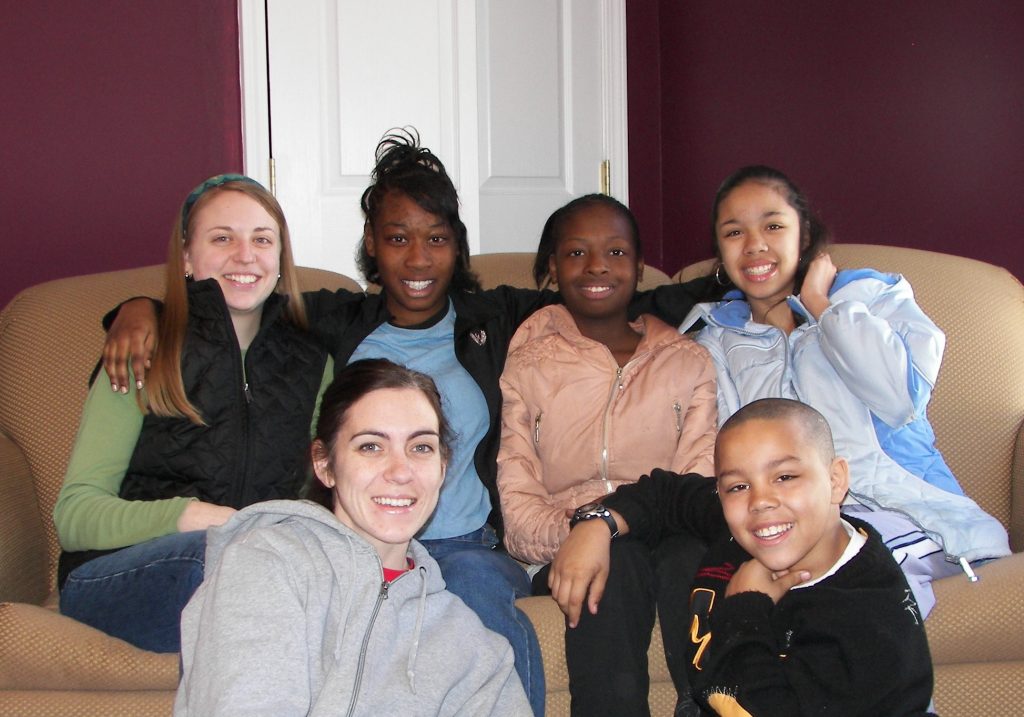 It was a Sunday morning this April, just after church, when I checked my email and found this letter:

Hello there. My name is Ciarra and I was just up early this morning and decided to google the people of praise because I remembered them from my youth. About ten or eleven years ago I lived in Shreveport Louisiana where I was pretty much a miserable poverty stricken teen with no family there outside of my father step mother and little brother. I lived a hard life there in the Allendale neighborhood. One day when I was at a friends house a group of people walked up and invited us to come to a camp that was starting in a few weeks. We didn’t say much to them at the time because number one they were strangers and number two we really didn’t know how to take it. Here is this bold group of people just as happy as can be marching around in this mean old neighborhood without a fear or worry! That intrigued us. We ended up going to the camp and it was the start of a great journey. We did EVERYTHING with them! We woke up early just to go over there and play with their toys. I joined a film club with a woman named Genevieve and had the time of my life with a disposable camera. They started making dinner at night and inviting the neighbors and even started making breakfast and inviting us to that as well. Sometimes it was the only way we were able to eat. One sad day about a year after meeting these people me and my little brother were forced to live in a homeless shelter with our stepmom by the state because we had toooons of dogs. The people of praise WITHOUT HESITATION helped my father clean and remodel that house for us to come home. They even built dog houses so that our dogs no longer had to share beds with us! We were able to come home 3 weeks later. May 3rd 2008 was my last day in Louisiana. My mom from OHIO came and moved us away to have a better living environment. We spent that morning eating breakfast and praying with the people of praise. I am writing this letter to say that the People of Praise made a huge impact on the lives of me and my brother and if there was any way possible that I could reconnect with Genevieve and Nathan and the Allendale group that would mean a lot to me! Thank you very much for your time.

I knew exactly who Ciarra was. Her story—the story of two children living in a house with floors caked with dog poop–had become something of a legend in our missionary circles. To my knowledge, no one had heard from Ciarra since her family left Allendale in 2008. Now here she was ten years later, telling us what we had meant to her. With awe and gratitude, I sent her letter on to Nathan and Genevieve Barrett and a few others, and read it aloud to my wife Gretchen, who had lived in Allendale during that period and started the camera club Ciarra mentioned.

Ciarra’s story goes back to February of 2007, when her little brother Eric came to find Nathan. Child welfare authorities had come to their house and decided that the children could no longer live there because of the filthy conditions. (There were eight or ten pit bulls living in the house and defecating everywhere.) Ciarra and Eric wound up going to live in a Salvation Army shelter, while Nathan contacted the father and offered to help clean the house.

“The whole house was like a toilet,” Nathan recalls. Working in the dark, since the house had no electricity, Nathan and Rus Lyons removed furniture, ripped out the carpet and cleaned the floors. As he chipped away at the encrusted dog droppings with a paint scraper, Nathan fumed with anger. Then, as he recalls, “All of a sudden Rus started singing one of the songs from the songbook. I started singing too. That was a beautiful moment.”

That weekend, Genevieve had traveled to Shreveport from Minnesota to visit Nathan. They were dating seriously but not yet engaged, and time together was precious. But their plans changed as Nathan dedicated much of his time to working at the house. Later, Genevieve herself got the chance to clean, working with Joan Pingel with rubber gloves and Lysol to disinfect every surface—the perfect preparation for a missionary marriage!

Nathan and crew hauled the old furniture to the dump and lent a few items to the family, who also bought a few furniture pieces. They built several dog houses in the backyard. Later, the child welfare authorities came to inspect the house, they deemed it safe for habitation and the children returned. The children’s father threw a barbecue for the whole missionary team to say thank you. Just over a year later, in the spring of 2008, Ciarra and Eric left Allendale for good, and that was our last contact with them until Ciarra sent her letter. 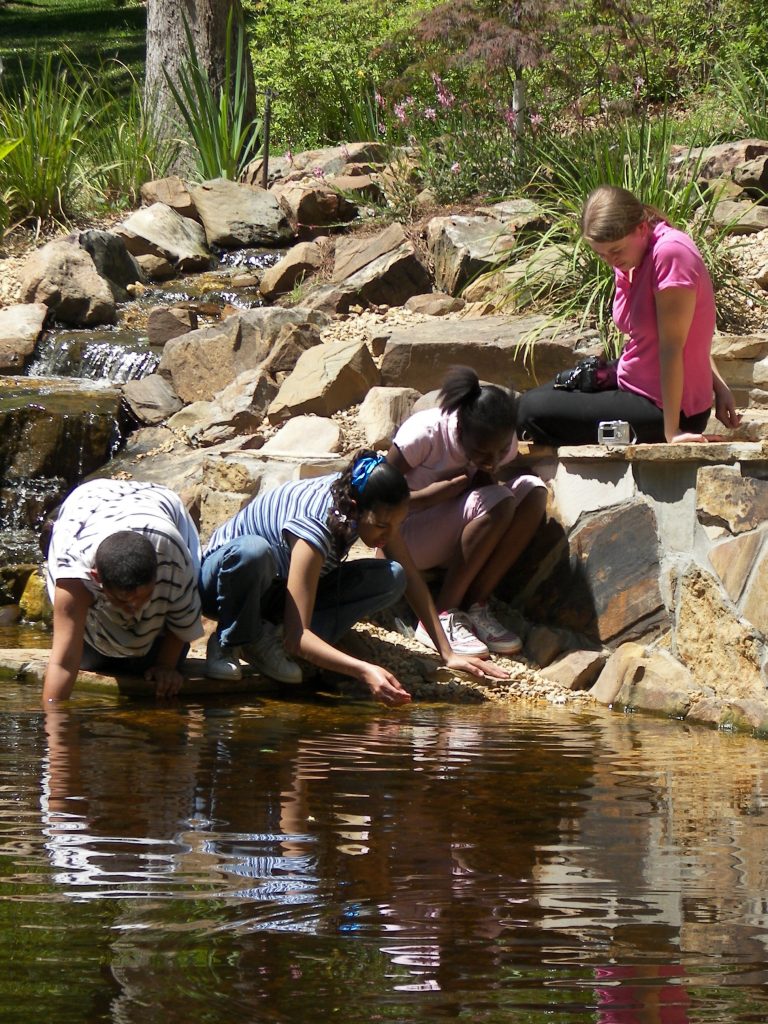 I replied quickly to her message and received a second email, just as beautiful, and then we arranged a time to talk on the phone. She told me that she very much wants others to know her story, and she filled me in on some of the background.

Ciarra and Eric had come to Allendale from Florida with their dad in 2005, when she was 12. Their lease in Florida had run out and a friend in Shreveport had found them a house there. When they arrived, they didn’t know anyone in the city aside from that friend, who soon moved away. Ciarra remembers getting in lots of fights during their first weeks in the neighborhood. That summer she attended our summer camp and she has good memories of beating out drum rhythms on overturned paint buckets, learning a praise dance with some of the other girls and some of our praise songs.

At home, things were changing for Ciarra and Eric. “When we first moved there . . . I saw a complete change in my dad. I was used to him being an outgoing, bubbly, friendly person, but a couple of months after we got to [Louisiana] he just became like a hermit, never left the house. If he needed something from the store, he would send us. He didn’t work. . . . I ended up finding later on that my dad had gotten on drugs really bad.”

The drugs brought financial difficulties. The city cut off water to the house, and they spent a year living without electricity. “We lived across the street from a baseball stadium. [My dad] made us wake up at 4:00 a.m. We had this big storage tote, and he would make us fill it up with water at the stadium and wheel it all the way home. It was so heavy we used to cry. . . .

“To cook, we had to walk around the neighborhood and collect sticks. To make a pack of Ramen noodles, we had to cook it on the grill. It was just an awful, awful situation.”

The children ate at school and at an after-school feeding program sponsored by Mt. Sinai Church, and sometimes at the community’s houses on Yale Avenue. They had arrived in the neighborhood with only two dogs, but the dogs kept having puppies.

She added, “We just didn’t have a childhood. Our only sense of being a child was when we were at the People of Praise.”

During this period, Ciarra did not have much contact with her mother in Ohio. When she did talk with her, “My dad would make us talk on speakerphone to make sure we didn’t tell her that we were having a rough time.”

But her dad allowed her to go to the public library, and there Ciarra created a Myspace page and used it to get in touch with her mom, telling her the truth about their situation. Her mom called and told Ciarra’s dad that she would be coming for a visit, and arrived a couple of weeks later. Ciarra remembers filling a pillowcase with her clothes and her brother’s clothes, and telling just a few of her friends that she would be leaving for good. Her mom picked up Ciarra and Eric from the community’s houses on Yale Avenue, and then went to tell Ciarra’s dad that they would be leaving. “That was the last time I saw my dad for maybe four years,” Ciarra said. Ciarra had engineered her own rescue.

Today she lives in the Toledo, Ohio, area with her two small children and their father, and works at a license branch. She told me she was thinking about homeschooling her kids and we chatted about that, since Gretchen has been teaching our own kids. I told her that our summer camps in Allendale are still going strong and I told her all about Praise Academy and how the school serves children from extremely difficult backgrounds like hers.

She asked me for pictures of the camps and school, and said that she would like to go back to see the progress in the neighborhood. “But on the other hand it was so painful. I don’t know when I’ll be able to go back and have the courage to face it.

“I could tell that story a thousand times,” Ciarra says. “God showed me that when I thought I didn’t have anybody he sent an army to swarm around us and smother us in love, love we weren’t getting at home and didn’t get anywhere else.”