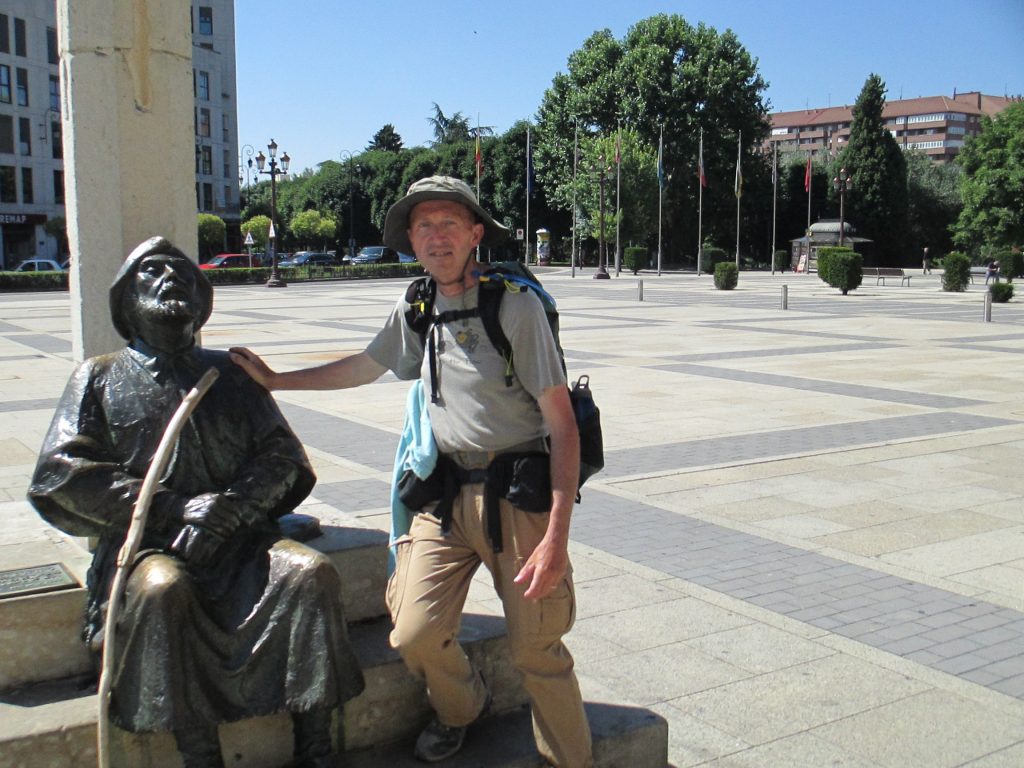 Tom Shriver paused at a statue of a tired pilgrim in the Plaza San Marcos in Leon, Spain, during his first hike on the Camino de Santiago pilgrimage route in 2014. He hopes to redo the 500-mile trip from Saint-Jean-Pied-De-Port, France, to Santiago de Compostela when he retires.

Editor’s note: During the prayer meeting at the end of the Leaders’ Conference for Men in March, Tom Shriver (Buffalo) shared the story of his healing from cancer, a story many in the room had never heard. The bottom line: Tom is a walking miracle.

That got us thinking. How many more healing stories are there? How many more miracle men and women are walking in our midst? Here are two such stories, but we invite you to send us more. If you’ve experienced a dramatic healing, please let us know and we will consider your story for a future issue.

Shortly before Christmas, 1993, I began to experience some persistent lower-back pain. My doctor started me on a series of tests and evaluations: C-T scan, sonogram, blood work, urinalysis, X-rays and MRI. I was seen by urologists, gastroenterologists, neurologists, neurosurgeons and even a chiropractor. Nothing turned up wrong, and my doctor dismissed the ever-increasing pain as stress-related.

Gradually the pain became so severe that I could not lie prone to sleep. Eventually, I was unable to drive or work, and walking was becoming difficult. Then my bowels and bladder shut down.

Members of the branch here in Buffalo came to the house regularly and laid hands upon me, praying the healing psalms from the Bible, inserting my name. My favorite, which I clung to throughout this ordeal, was Psalm 118:17, “Tom shall not die, but live, and declare the works of the Lord.”

On February 23, 1994, I returned home from a doctor’s visit and within an hour I was paralyzed from the waist down. My doctors were notified and I was rushed to Sisters of Charity Hospital in Buffalo. I was sent for a myelogram and another C-T scan. When the tests were complete, my neurosurgeon told me that something was pressing on my spinal cord. I was prepped immediately for emergency surgery.

Prayer groups and churches, family and friends, strangers and community members prayed in earnest for God’s will to be done. I cannot deny that my relationship with the Lord Jesus, coupled with the power of prayer from God’s people, was the reason I was so confident and able to hear the bad news from the doctors when I awoke from surgery the next morning.

The surgeon had removed a tumor that was pressing on my spinal cord and causing the paralysis. He expected the paralysis to be temporary, but I would have to learn to walk again and it might take three years to recover full use of my legs. The tumor was malignant and he said there were probably more (there were).

I remained calm and confident; I was so grateful to be finally out of pain. I knew that God put me flat on my back for some purpose which I was unaware of right then, but which he would reveal on his own schedule.

The next few months included recovery, radiation, physical and occupational therapy, the development of blood clots in my leg, lots of good food and fellowship, massive chemotherapy and three days of extensive radiation leading up to a bone marrow transplant in early June.

About three weeks after the transplant I developed bleeding around the brain, which required immediate surgery. Doctors were not sure if I could live through it in my weakened condition. The night of my surgery, my wife Theresa informed Bud Northway, Buffalo’s principal branch coordinator at the time, of the urgent need for prayer. Bud was attending the leaders’ conference in South Bend, where 200 men lifted me up to the Lord in prayer.

A miracle happened: I came through surgery with flying colors. In the morning I was up walking around the halls, having tea with the nurses, mostly unaware of the wonder God had performed. My doctor was so surprised to see my instant recovery that he labeled me “The Miracle Man!” God had heard and responded to the prayers of his people.

Slowly but steadily, my physical strength and endurance returned. One doctor told me: “After all you’ve been through, the progress I see in so little time is nothing short of a miracle.” Only a month after I was released from the transplant hospital, I was off all antirejection medications. Today, 24 years after the transplant, I am still cancer-free. Glory to God!

In those 24 years God has given me much to be thankful for. I was able to see each of my five children grow into wonderful adults, get married, and bless us with 14 grandchildren so far. Theresa and I continue to grow closer in our marriage and our walk with the Lord through several Marriage in Christ seminars we have given together.

The Lord has provided me with two teaching jobs working with high school students who have special needs. In the Buffalo branch I serve as the principal branch coordinator, a position I have held for more than 13 years. I love this job as much as my teaching job. I, along with my wife and a few others, have shared leadership of Buffalo Camp for more than 30 years, drawing many of our community children into closer relationships with the Lord.

I am also very grateful for the opportunity to have walked the Camino de Santiago pilgrimage route in Spain twice in the past three years. I hope to be able to walk it at least one more time after I retire. These pilgrimages have given me tremendous moments of closeness to the Lord as well as great struggles—times when I learned to lean on him and nothing else.

So the story continues. On a warm June evening, 24 years ago, the Lord of the universe heard the prayers of his people and reached down and touched this simple man, beginning a chain reaction of events that blessed hundreds, maybe thousands of people since that night. I am humbled, yet grateful that God chose me to be the object of so much blessing.

I didn’t grow up in the community, but in the spring of 2001 I went on a People of Praise retreat for ninth- and tenth-grade girls along with other members of my class at Trinity School at Greenlawn. On Saturday afternoon, we spent quite a bit of time in personal prayer and then had the opportunity to pray with one another in small groups. I was raised Catholic, but I had never experienced charismatic prayer before and this was the first time I had ever prayed with anyone. Although I’d heard of miracles and believed in them theoretically, I had always been fairly cynical when I heard of them actually occurring. Yet that afternoon, as we were preparing to pray together, a thought entered my head: “pray for your leg.”

I knew exactly what that meant. You wouldn’t have noticed it by looking at me, but my right leg was seven millimeters shorter than my left leg. Also, I only had half of a vertebra at one point in my back, which threw things farther out of alignment. These two things meant that my spine wasn’t even, so the ligaments in my back were stretched out. I had to wear a lift in my shoe—a small piece of rubber—to make my legs function as if they were the same length and get some injections near my spine to strengthen the stretched ligaments. Though I had only known about it for a couple of years, I had had this problem my entire life and I expected to have it for the rest of my life.

When that thought entered my head, I knew, with absolutely no doubt, that God would heal me. It was the most certain I have ever felt about anything, before or since. In our small group, I asked to be prayed with in a very vague way. I said something along the lines of, “I have some back problems.” I experienced no sensation whatsoever while being prayed with, but as soon as I had been prayed with I knew, with absolute certainty, that I had been healed, that my legs were the same length and that the half-vertebra was whole.

Coming home that evening, I kept my lift in my shoe, but it didn’t feel right. When I got home, I went straight to my room, shut the door, and stood in front of the mirror. If you look, when you put your feet together your ankle bones should line up and touch in the middle. Mine never had, and my shoulders had never been even. When I looked in the mirror that night, my ankle bones lined up perfectly and my shoulders were exactly the same height. Now, more than 17 years later, they still do and still are. I have never worn my lift again and have never had another problem with these things since. Praise God!