Who is my Neighbor? 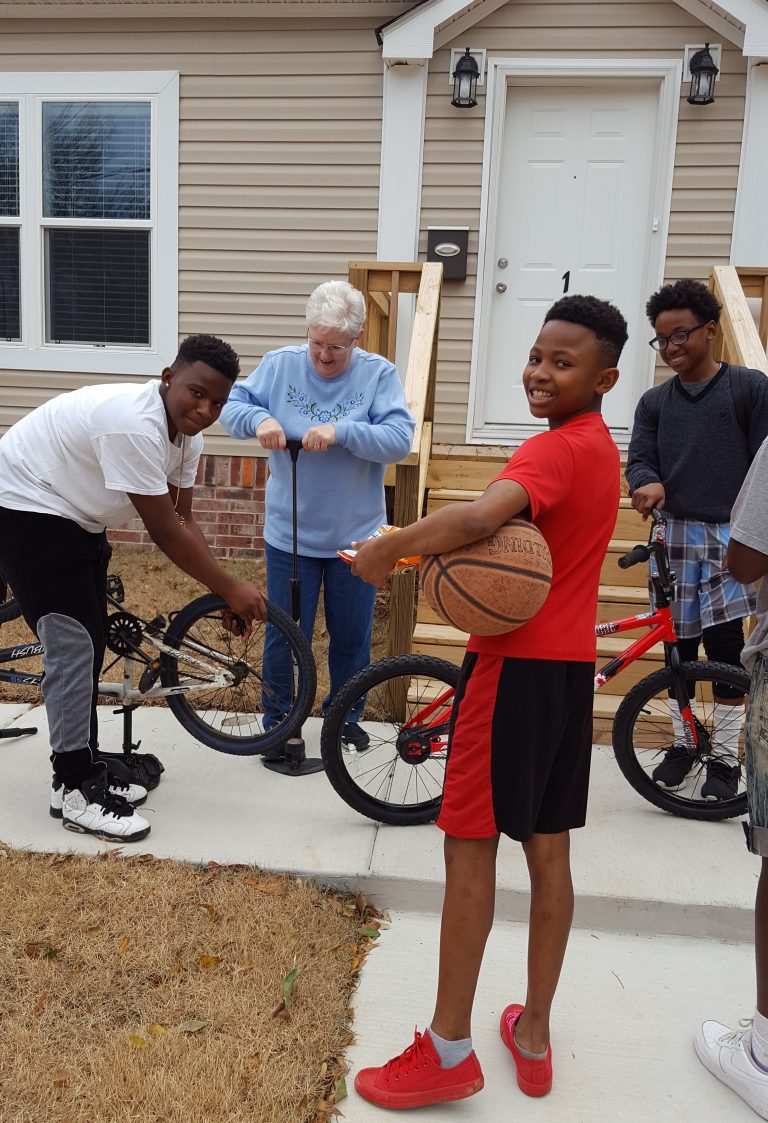 Boys in the neighborhood know where to go for bike repairs. Here, Patti Deakin lends a hand.

It’s 7:00 a.m. and Ben Reinhardt hears someone yelling and pounding on the front door of his house on Dove Street in Shreveport’s Allendale/Lakeside neighborhood. He opens it and finds his neighbor Cedric from across the street, warning him that a water main has burst and is flooding the Reinhardts’ lawn. Later that afternoon, Ben and Cedric commiserate together on Cedric’s porch, chatting with the city workers and waiting for the water for their block to be turned back on.

Mary Beckley and Lori Twining, teachers at Praise Academy and members of the Sisterhood who also live on that block, are a bit puzzled because someone keeps hauling their trash out to the road before they can do it themselves. Mary finally figures out that the culprit is Kenny, a quiet neighbor. He has been taking care of their trash for more than a year and does so for everybody else on the block as well.

When Brandon’s job takes him to Houston to help with renovations after Hurricane Harvey, sisters on the Christians in Mission team bring his wife LaToya and their kids meals each night for the first two weeks. They have three children at Praise Academy and live on the same street as Ben, the Sisterhood women, Cedric and Kenny.

It’s not uncommon for young moms on the Christians in Mission team to swap baby clothes and baby-raising tips with the moms of Praise Academy students. When a bag of hand-me-down clothes falls into the hands of Vanessa, one of Kathleen Reinhardt’s neighbors, she hollers across the street to see if Kathleen’s family can use any of them. 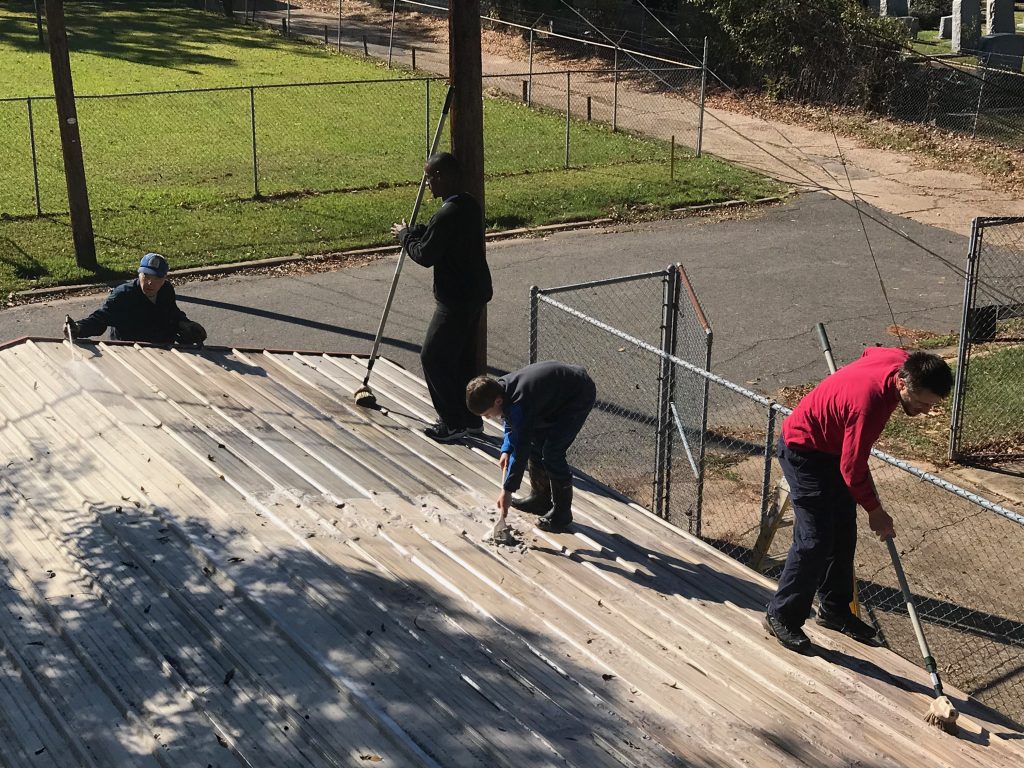 Neighbors work to repair a house damaged by Hurricane Harvey in August.

A cold snap hits Shreveport in early January and the whole neighborhood has to deal with frozen pipes. Joan Pingel and John and Jo Zimmel offer to do laundry at their house for a Praise Academy family that has no water, only to discover that the one pipe in their home that is frozen is the one leading to the washing machine. The other community households on the block divide up the laundry among them to get it all washed.

Late one afternoon, David Zimmel receives several urgent texts and calls, because Miss Agatha’s house is in flames. He rushes over, ready to pull the wheelchair-bound Miss Agatha and her grandkids from the burning house, but is relieved to find the family standing on the street. Firemen shoot water through huge holes in the roof, and David quickly realizes that the house and everything in it are lost. More neighbors gather around the house, checking on Miss Agatha. David finds Miss Agatha’s daughter Jasmine and asks, “Is there anything we can do to help?”

After the firemen leave, David confirms with Jasmine that the family has a place to stay for the night. He repeats his offer. “Please let us know what we can do. We would love to help you with anything.”

Later that evening, Jasmine calls. “David, when you said ‘anything,’ what did you mean? . . . My Mom is going to need a bed.”

The next morning David goes looking for the bed. He soon establishes that the CIM team has an extra mattress and another neighbor has a box-spring and bedframe. Other neighbors bring over food and spare cash. One neighbor brings bed linens, towels and other basic household supplies that she has just bought for her own family, telling David that Miss Agatha needs them more.

David brings everything over to Miss Agatha’s. “I want you to know that this stuff didn’t come from me,” he says, since all the neighbors requested they remain anonymous. “God is really taking care of y’all, and everyone in this neighborhood wants to help.”

Miss Agatha keeps pulling items out of the bags, saying, “We sure need this. . . . Yep, we need this, too.”

On a mild December morning Joan Pingel gets a call from a Praise Academy mom, Shabarbara. She explains that she can’t bring her daughter Paris to school that morning because her tire is flat and asks for someone to come and bring a compressor. Jared Gonzalez drives over to pick up Paris and learns that Shabarbara also has older kids to drop off at school, a work appointment to get to, and two toddlers and an infant to take care of.

While David heads over to the house with a compressor, Jared drops off Paris and the toddlers at Praise Academy and then takes Shabarbara and the other kids where they need to go. John and Jo Zimmel, prompted by the Holy Spirit during their personal prayer, arrive at the school from their house next door, offering to help. They take the toddlers, enabling the teachers to go on with their classes as usual.

Jared and Shabarbara return with her infant to her house, where they learn that the compressor didn’t work. David and Shabarbara drive over to a shop to pick up a new tire. On their way back home, she turns to David and asks him, “So, are you part of the family?”

They arrive at Shabarbara’s car and David replaces the tire. 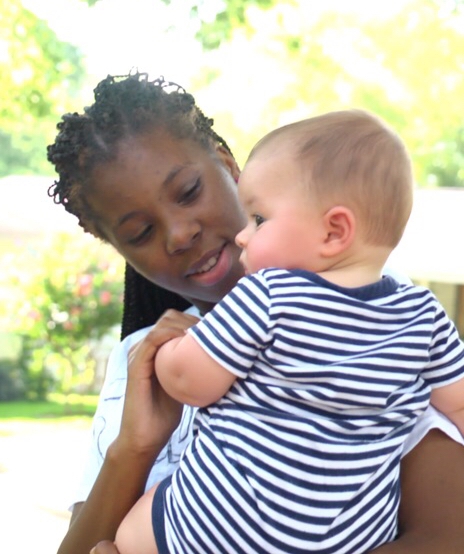 Luke getting well taken care of.

Colleen Bowar is hustling to cart her twin toddlers and all their gear out the door of her house and into her car. She drives the one-minute route that takes her around the cemetery to Yale Avenue and parks in the last available spot in front of Praise Academy. Opening the car door, she is ambushed by eight children who have come running from the school to welcome her to the Thanksgiving party. Latisha, the oldest student, whisks baby Claire away. Other students grab the rest of her things. With baby Jack in one arm, she feels her free hand being yanked by the smaller hand of a girl who wants Colleen to come see her work inside the school. As the child drags her towards the building, Jabbareanna, a young woman who volunteers at the school, asks to take baby Jack. Colleen hands him off and is carried away through a round of show-and-tells. Where are my kids? she wonders, suddenly realizing she has lost track of them. She scans the room, which is full of Praise Academy families and school volunteers, tables loaded with meat and greens, and finally she spots Latisha and Jabbareanna happily tending to the twins. Oh, I don’t have to worry, she says to herself.