In Corvallis, a City on a Hill Keeps Shining 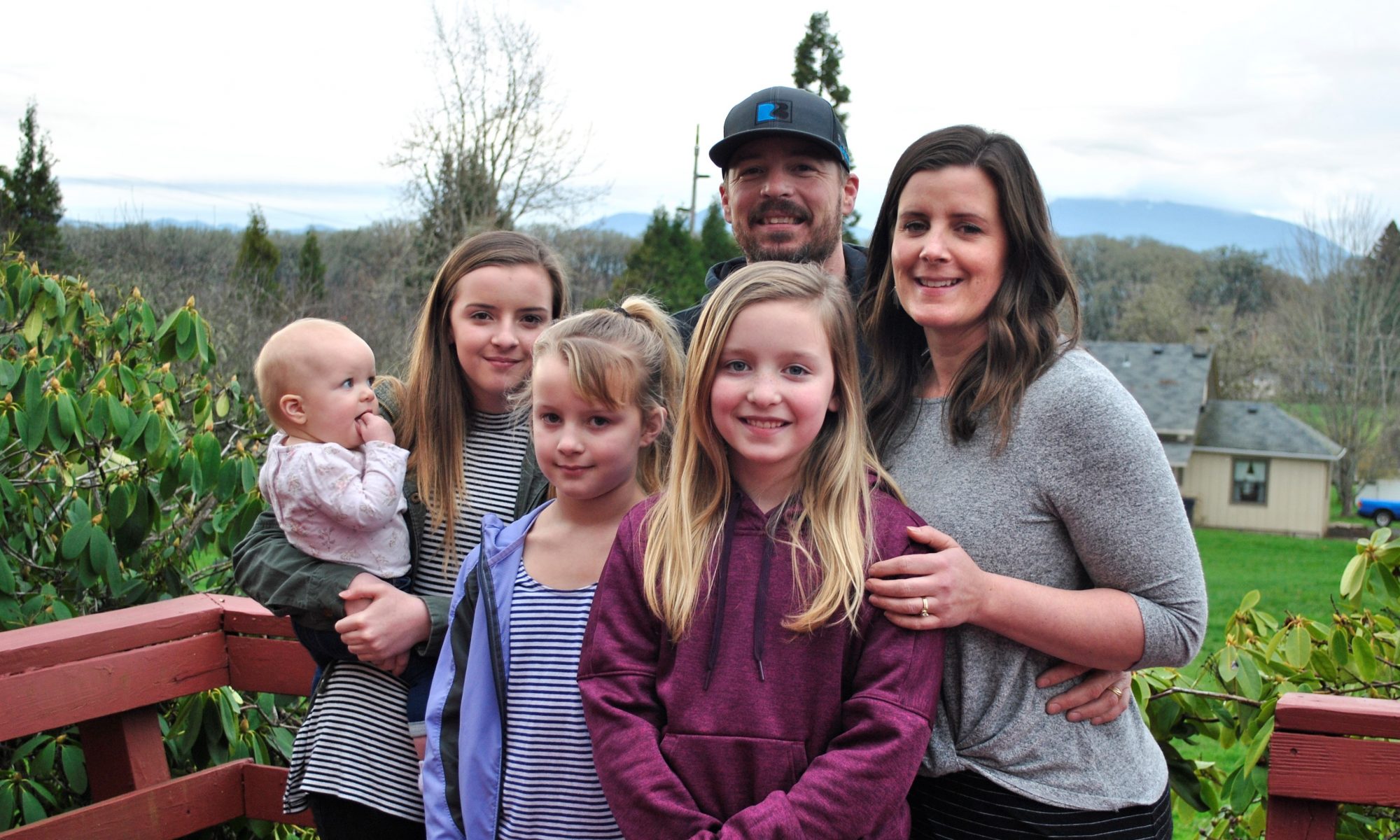 Tom and Jessica Melton and some of their children on the deck of their new home. (Not pictured: their son, Chris.) Behind them is the community center, and Tim and Jo Wagner’s home.

by Chris Meehan and Anne Osterhouse

If you stand on top of Mary’s Peak—at 4,097 feet the tallest point in the Central Oregon Coast Range—you can clearly see a large, red, colonial-style house which sits on top of a hill outside Corvallis. Set back from an idyllic country road, which is flanked on one side by a Douglas fir woods and on the other by tidy garden beds and a handful of well-pruned fruit trees, the house is at the heart of a cluster of 10 houses originally built and owned by members of The Vine and the Branches community, which later became the Corvallis branch.

For 40 years, it has been the site of many branch gatherings, parties and meetings, the house where scores of people have stayed for a night or a few months, and the yard where many branch children have played games long after dark on summer evenings. This year, since long-time owners Francis and Betty Johnson have moved into an assisted living facility, it is switching owners but—to the relief of many—it is staying in the community.

When Tom and Jessica Melton’s fifth child, Lydia, was born last March, they knew their house, a few miles away from “the hill,” as the cluster is known, wasn’t going to last their family much longer. They had already felt like their house, at 1,350 square feet, was bursting at the seams even before adding a new baby to the mix. They were confident that the Lord would provide for their need, but they had no idea how. They started considering building an addition.

Last summer, Francis, 91, and then Betty, 95, each developed congestive heart failure, which hastened their decision about whether to stay in their house. Both builders by nature, Francis was part of the group of men who built most of the houses on the hill, and Betty and he had spearheaded the creation of an assisted living center in town, where they moved in December. 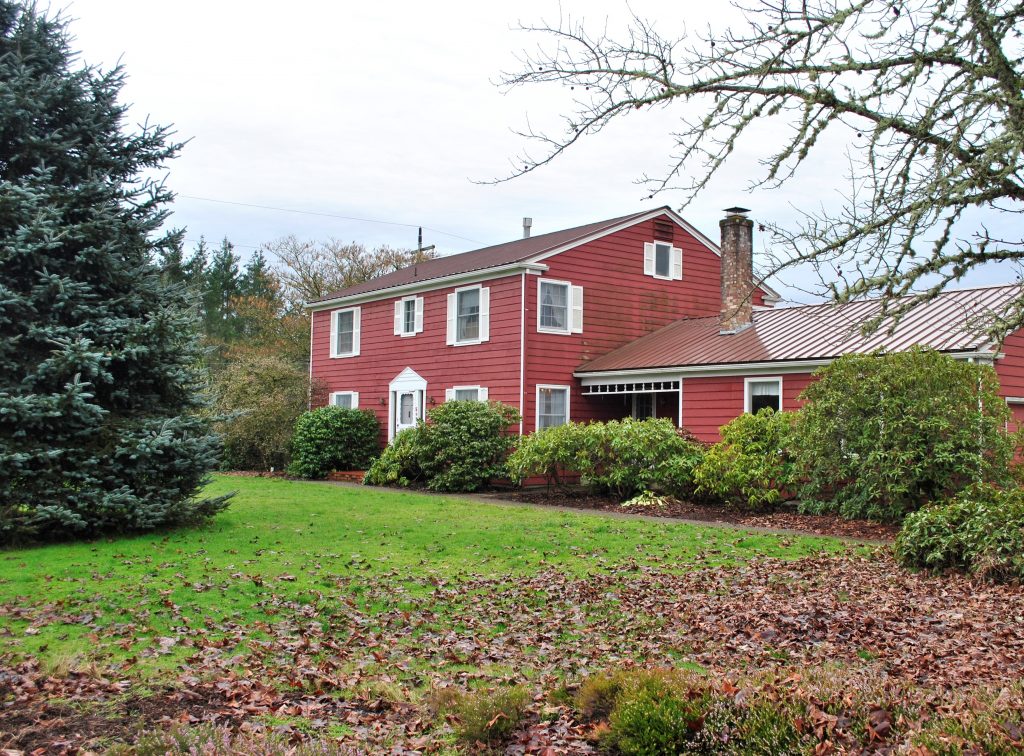 The former “Johnson Hotel” stands on one acre at the very top of a hill and is a prominent feature in the area.

When the Johnsons decided to sell their house and move, branch members started asking, “How can we keep it in the community? Who could live in it?” The Meltons certainly needed more space, but they knew the Johnsons’ house would be too expensive for them. They never even considered it.

John and Mary Lou Carey have lived down the hill from the Johnsons for many years and shared a garden with them. In 2001, while the Careys were remodeling their own house, they and two of their teenage children moved in with the Johnsons for two months. Mary Lou is a retired nurse, and as the Johnsons began developing health problems last year the Careys often walked up the hill to assist them. When the question of what to do with the Johnsons’ home arose, the Careys realized that they could help, even though they weren’t looking for a house themselves. They agreed to purchase the house as an investment and offered it to the Meltons on a lease-to-own basis.

Jessica Melton is the daughter of branch members Chris and Colette Taylor and grew up on the hill. Her father, Chris, built the Johnsons’ house in 1977 along with Francis and Chris’s brother, Frank. “Having the opportunity to live in Francis and Betty’s house was totally unexpected–the farthest thing from my mind,” says Jessica. “Although the Lord had made it clear to me that he was going to provide the additional space we needed, I never imagined I would be able to live across the street from where I grew up, in a house my father built. It’s really awesome that the Careys have made it possible for us to afford it.” 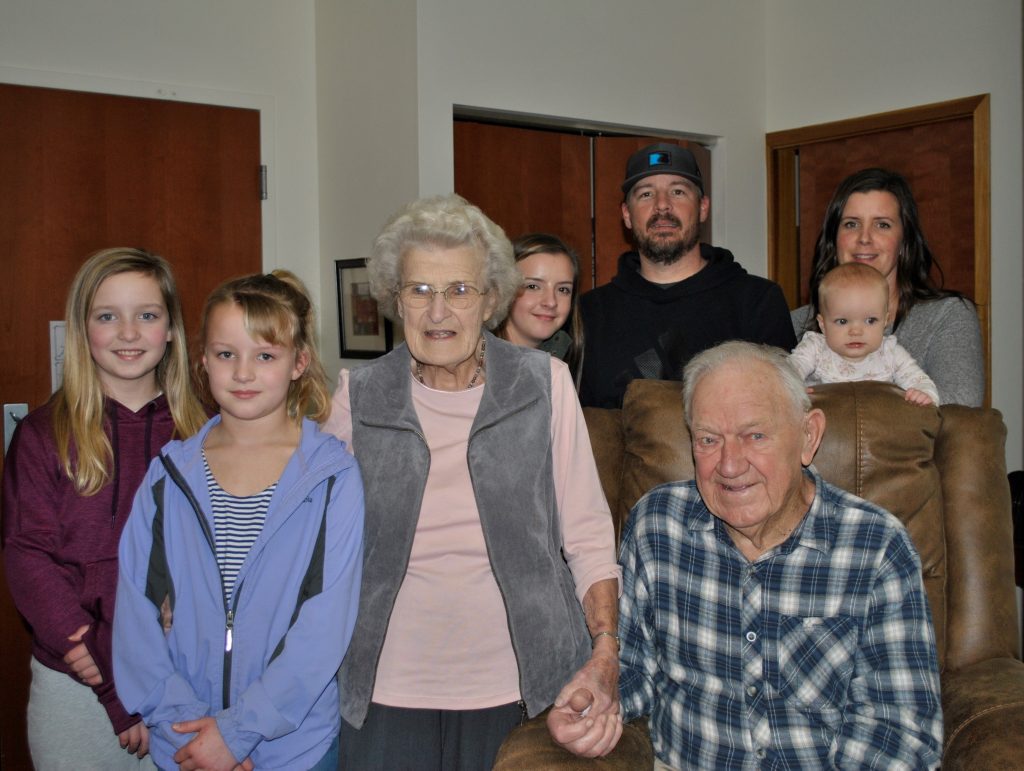 Tom and Jessica Melton with four of their five children, along with Francis and Betty Johnson in the living room of the house.

The Johnsons’ house will be a big upgrade in space for the Meltons. It has 2,700 square feet of finished space, plus a large, unfinished basement. The first floor has a kitchen, living room, master bedroom, bathroom, family room with a fireplace and a dining room. Upstairs there are two bedrooms, another bathroom, a small sewing/hobby room and a very large bonus room that is 15 feet wide by 30 feet long, in which the Johnsons kept many beds, almost like a dormitory. (The Meltons are renovating the bonus room, adding a wall to turn it into two bedrooms, bringing the total number to five.)

Francis explains that they had not originally planned to make the house so big. “At first we weren’t especially focused on hospitality, but we built the house extra large because the Lord told us to.” Eventually they were hosting so many people that the house became known as the “Johnson Hotel”.

“The Johnsons were gracious enough to let community children and their friends play around their house on summer evenings, even after dark,” adds Tim Wagner. “Because it was centrally located and there were shrubs and trees for hiding plus a deck to use as home base, Francis and Betty were happy to have the children play, even after they had turned in for the night.” 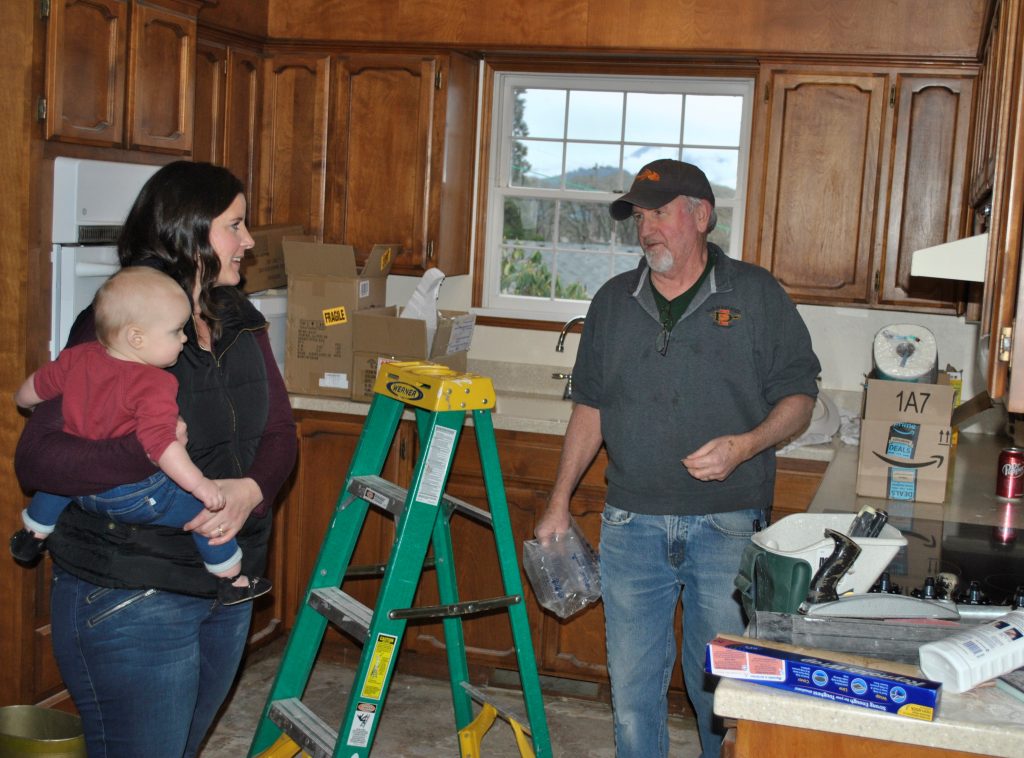 Chris Taylor, along with other family and branch members, is volunteering to help the Meltons to renovate the house before they move in.

It was the kind of life that the founders of the hill, or Christian Village, as it is also called, had hoped and planned for. In 1977, Fr. Charlie Harris, C.S.C., the Johnsons, the Hackenbrucks, the Taylors, the Wagners and a few other families then part of The Vine and the Branches community, bought 12 acres of rolling farmland together. They divided the property into one-acre lots and eventually built 10 houses, positioning them on the corners of lots to allow for future growth and for large common spaces between them, spaces that have served as sites for picnics, pig roasts, volleyball games and relay races over the years. An 11th home, belonging to Phil and Jean Monaco, lies across Nash Street and was not part of the original parcel of land. One of the lots already had a small farmhouse on it, which served as Fr. Charlie’s home and office. Now expanded, the house serves the branch as a community center. Six of the original 10 homes are still owned by community members and the community.

For the longtime residents, the hill is full of memories—like the time three families went in together and bought a few head of cattle. As Tim recalls, “One day they escaped their pen. I still remember us running down the road trying to round them up.”

“Sometimes I’ll just see someone’s car in their driveway and use it as an excuse to stop by,” Tim adds. “The other day I delivered a mincemeat pie to Connie Hackenbruck, who shares my taste for them, and she, Terry and I sat around and reminisced about community history for 30 minutes.”

“We’re so grateful for the Careys’ generosity which will allow our original vision for shared life to continue,” says Phil Monaco, the principal branch coordinator. “This has been a big change for us. The Johnsons have always been literally at the center of our life, and we greatly miss them up on the hill. Their magnanimous generosity to every person has been absolutely beyond compare and inspiring, but it will be great to have a young family filling the gap. Our proximity has made a lot of wonderful things happen over the years and it’s precious to us.”

Tom and Jessica are looking forward to continuing all the hospitality a house with five children will allow once they move in, probably in February. “It’s a consolation to me that they will love it like we did and will take care of it,” says Francis. He and Betty have recently been heard to say, “The Johnson Hotel has new proprietors, and from now on will be called the Melton Hilton.”