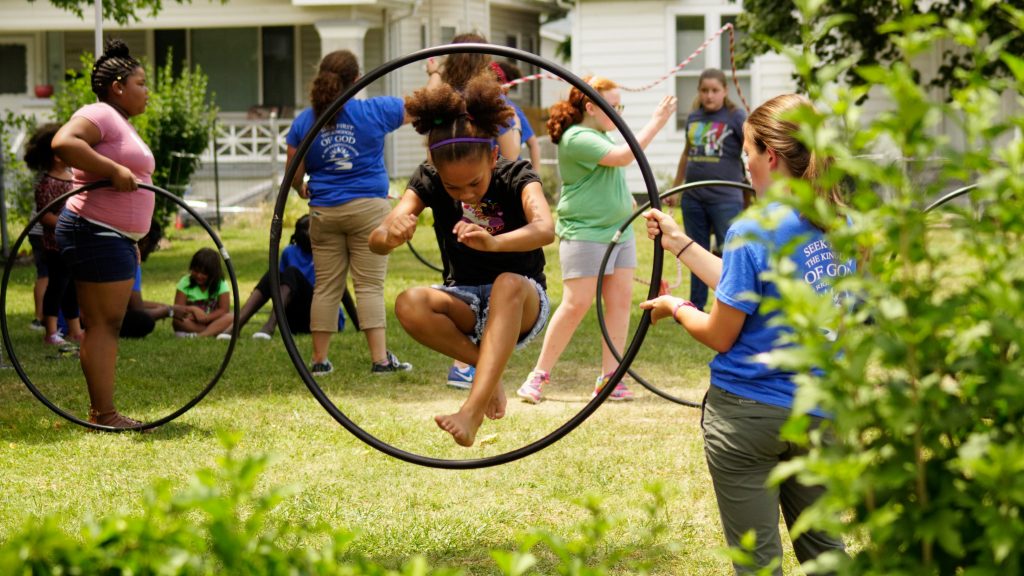 Evansville: Ann held the Hula-Hoop as the girls started the day with some group play before breaking up into age groups. (Chris Vieck)

After six trips, three summer camps, myriad work projects and the efforts of more than 500 people, the 2017 Action summer is in the books. Here are some numbers and stories:

• More than 310 children attended the summer camps in Evansville, Allendale and Indianapolis. Allendale, our longest-running camp, led the way with 130 campers.

• 156 people from 11 branches served as staff, interns and volunteers. (In Evansville, one of the volunteers was a young man named Xavier Anderson. He grew up in Allendale, where he once attended camp.)

• Also in Evansville, the teams put in 1,500 man hours moving 100 tons of dirt to help grade the yards of community members. “Y’all are making it beautiful,” one passerby exclaimed.

• Two hundred people came to a barbecue in Evansville, which featured hamburgers and greens grown in the new start’s urban farm. 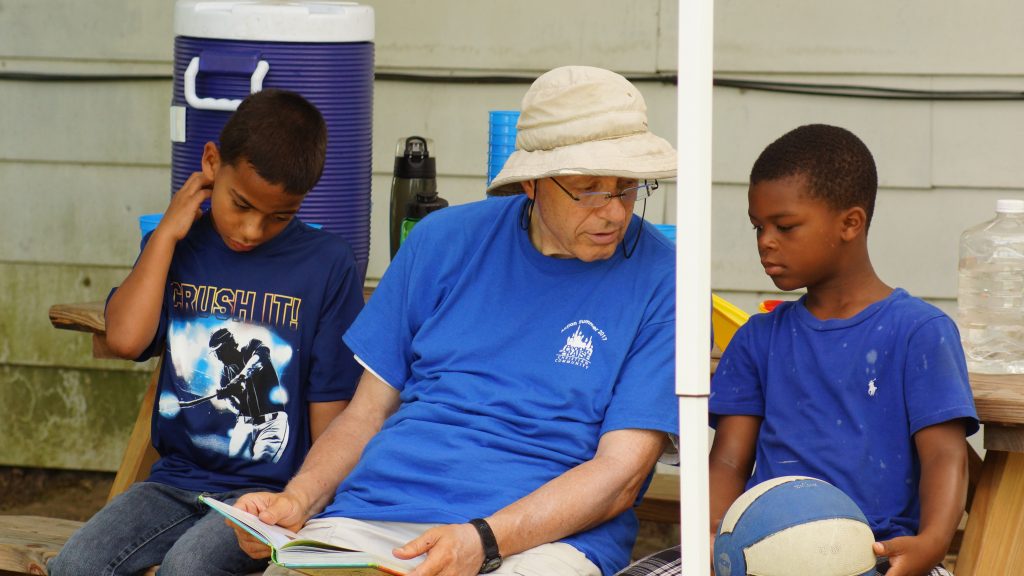 Evansville: John Zimmel discussed a Bible story with some of the youngest boys. (Dan Schwab) 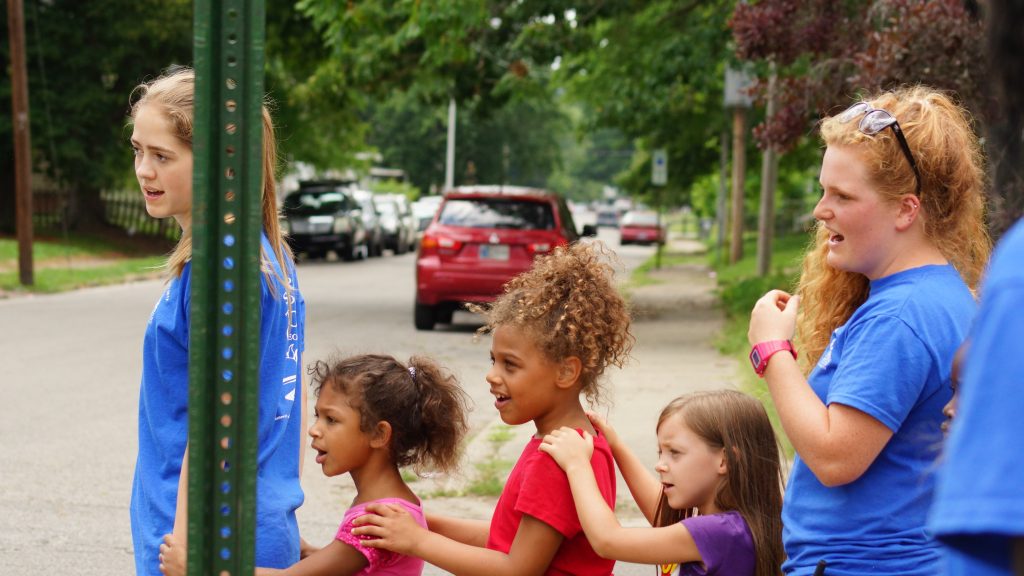 Evansville: Anna (far left) and Kady Busekrus (far right), walked with the littlest girls’ group, who were on their way to spend some time with Dan Sullivan (Mission, Evansville) and learn about compasses and staying on the straight and narrow. (Sophie Tiller) 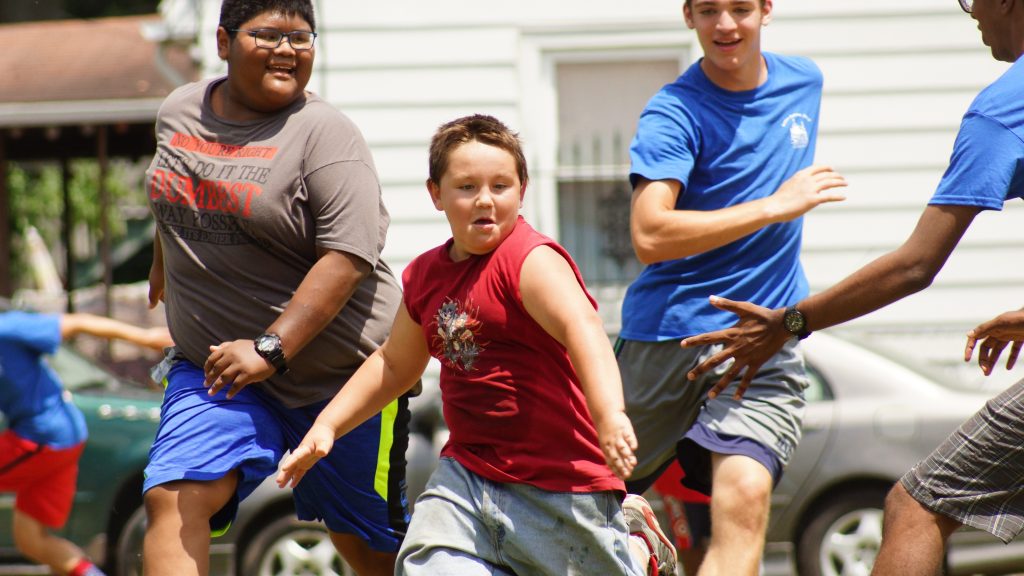 Evansville: Luke (center right) and Peter (reaching in from the right) played capture the flag with the boys in their group. (Dan Schwab) 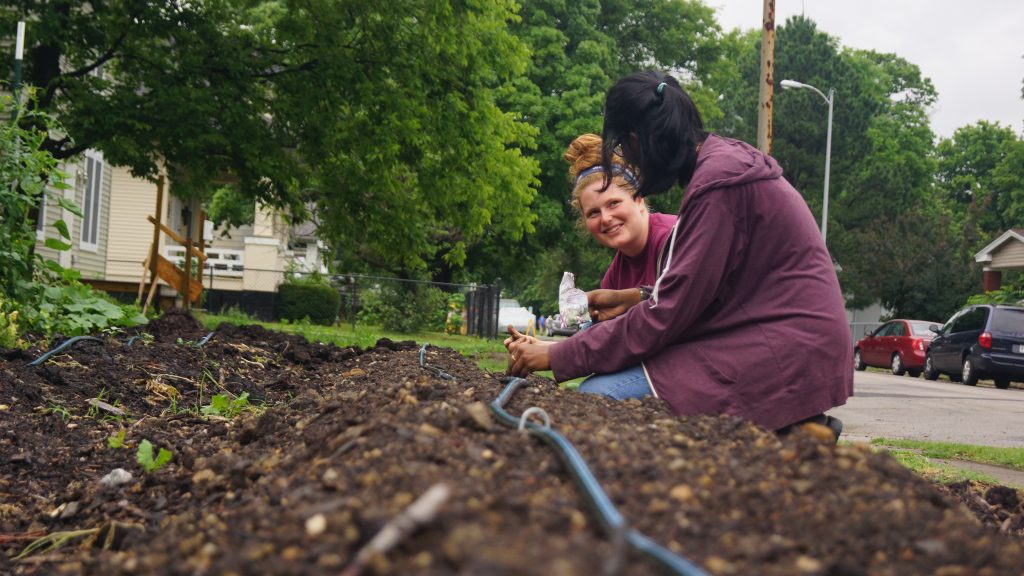 Addie Clark, a sophomore from Portland, recalls a story from the camp in Evansville: “After we read about Jesus’ baptism and talked about the meaning of baptism, one girl came back the next day and announced that she had asked her mom if she could be baptized. Her mom said ‘Yes!’”

Alex Rowland, a staff member in Evansville, used a comic book Bible for daily lessons with the 12-year-old boys in his camp group. One of the boys asked if he could have a Bible to keep, so Alex arranged to give him one. “The Bible was an absolute hit,” Alex said. “When the boy returned to camp, he had already read halfway through it. He said he had read as much as he could while it was still light.”

In Allendale, the camp ran very smoothly, with so few fights and problems that the boys and girls joined together on the last day for a camp-wide pizza party—“something we would not have attempted in previous years,” according to Abby Earhart (Mission, Evansville).

Three boys from the Allendale camp were playing basketball when three more boys from another neighborhood joined them. John Crimmins (Mission, Evansville) saw what happened: “The other boys were getting in the Allendale boys’ faces, yelling. The Allendale boys didn’t cuss back. They were peaceful in the face of aggression, but not backing down either. It was the Lord working through them.” John invited the three strangers to the barbecue, where one of them said that he had noticed that the Allendale boys had been playing with a calmer attitude than he was used to. “We have to be super tough when we play in our neighborhood,” the boy said.

In Allendale, the younger boys had fun pelting an 11-foot-high cardboard Goliath with water balloons, while attacking him with swords made from foam and PVC pipe. Brad Elliott (northern Virginia) reports that they used the same swords to knight some of the boys to the service of Jesus Christ.

Rachel Was, an intern in Indianapolis, remembers visiting with an older woman on her front porch who complained of extreme shoulder pain. The woman allowed Rachel and two others to pray with her. They prayed two times, and then the woman told them that she felt no pain, raising her elbow over her head. “You could tell from her face that the pain had gone away,” Rachel said.

In Indianapolis, the staff ordered sub sandwiches from Walmart for the campers. When Amy Root (Servant Branch) came to pick them up, the woman at the counter apologized because she had accidentally put extra meat on all the sandwiches. She explained that there would be no charge for the extra meat. When Amy thanked her and explained who the sandwiches were for, the woman realized that her own daughter was attending the camp and would be eating her sandwiches.

Ellen Putzier (Mission, Indianapolis South Side) reports that in Indianapolis two girls had been unable to make peace with each other. They had gone through the motions of reconciliation, but Ellen noticed a deep change when they enacted the roles of the prodigal son and his father in a skit. The girls said their lines with feeling and embraced. “It was strikingly beautiful,” Ellen said. 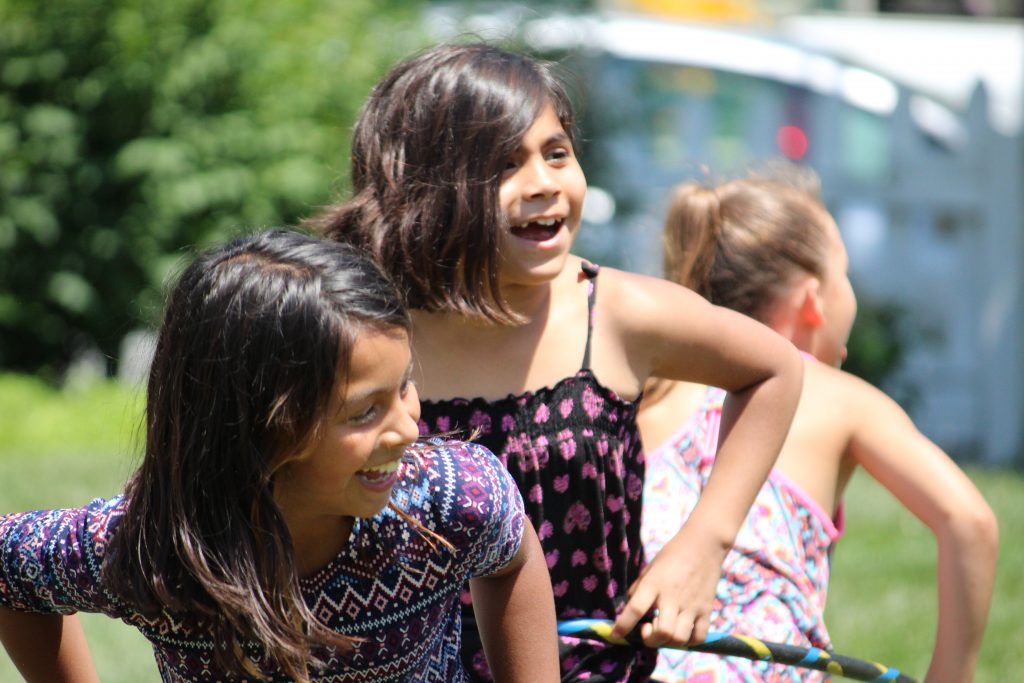 Indianapolis: Some of the girls enjoyed a relay race involving Hula-Hoops. (Rachel Was) 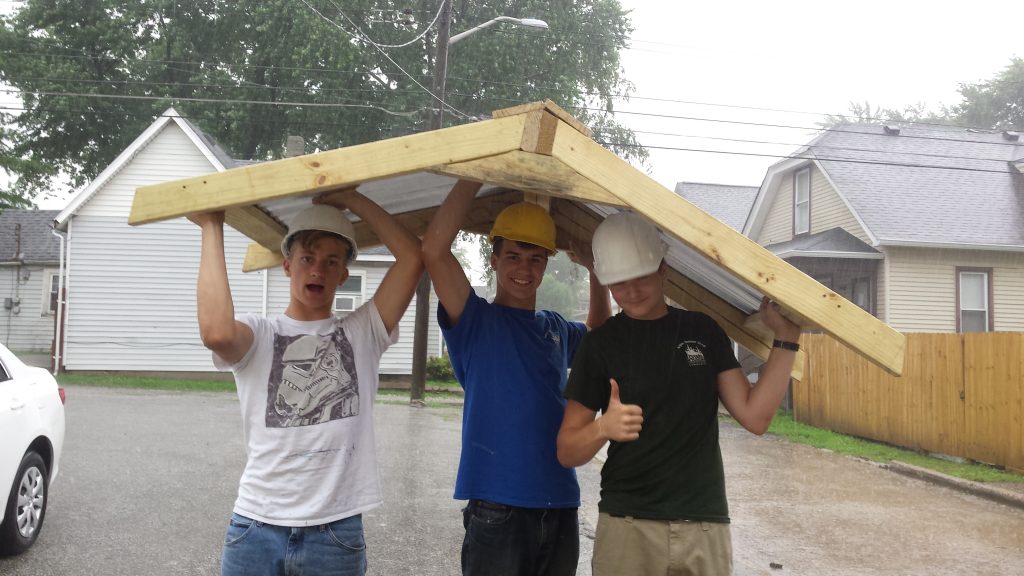 Indianapolis: From left: Josh, Aidan and Matthew tested out a roof structure they made to cover the grill in the rain. (Celina Tragesser) 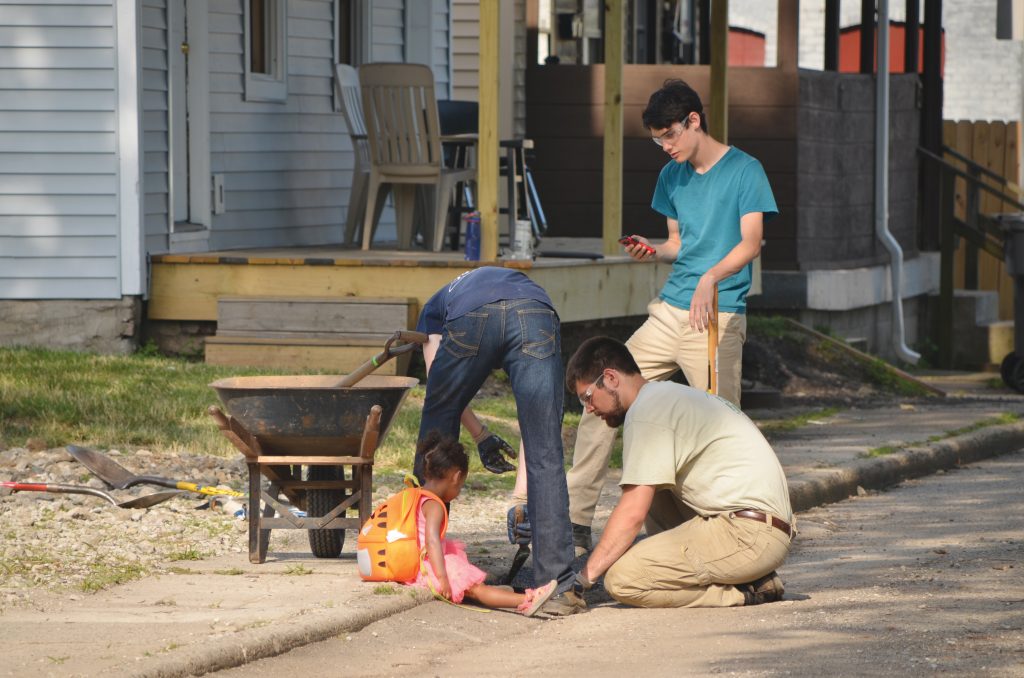 Indianapolis: Kateri looked on as Ben Mysliwiec (South Bend), Neil and Paul laid asphalt for a ramp that goes to a parking pad for the CIM cars. (Cathy Walters) 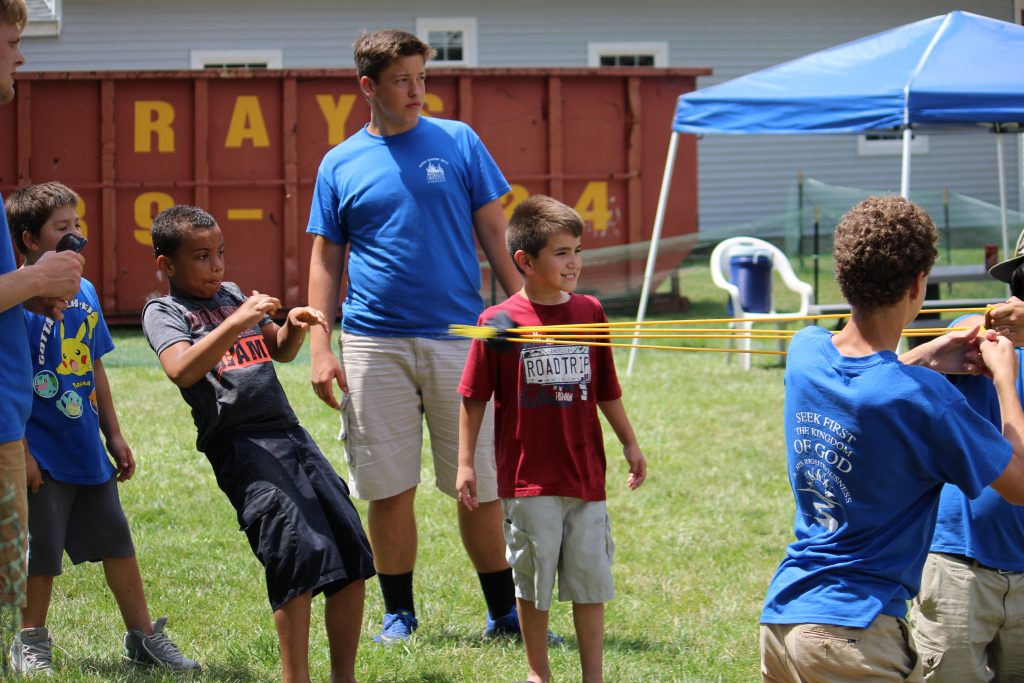 Indianapolis: At one point the boys used beanbags and a slingshot to hit a target all the way across the camp field. Action team members Joey (standing) and Isaac (far right) assisted. (Rachel Was) 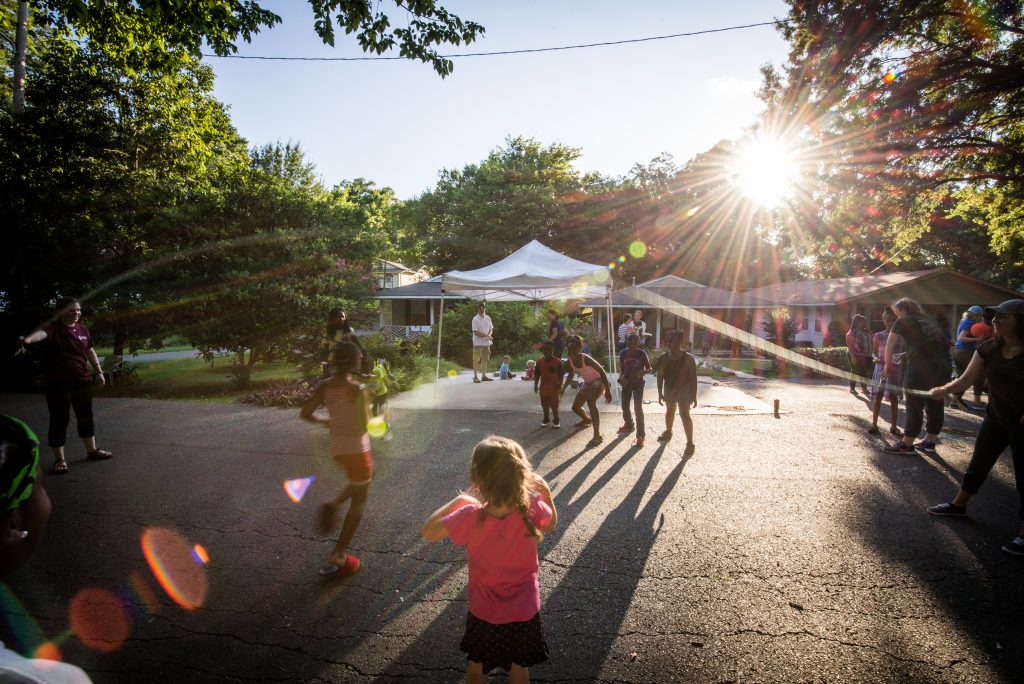 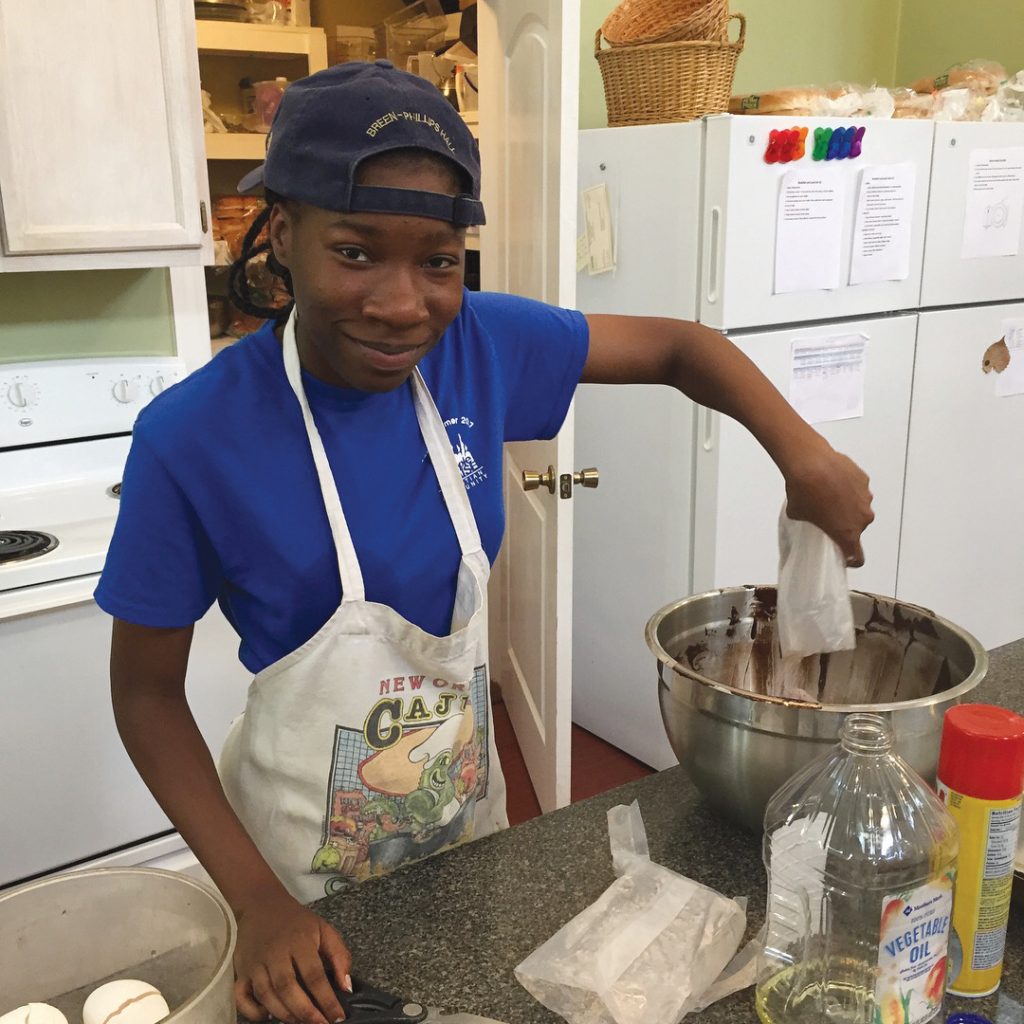 Allendale: Raquel, a neighborhood girl who came on the first trip this summer. (Brigette Mysliwiec) 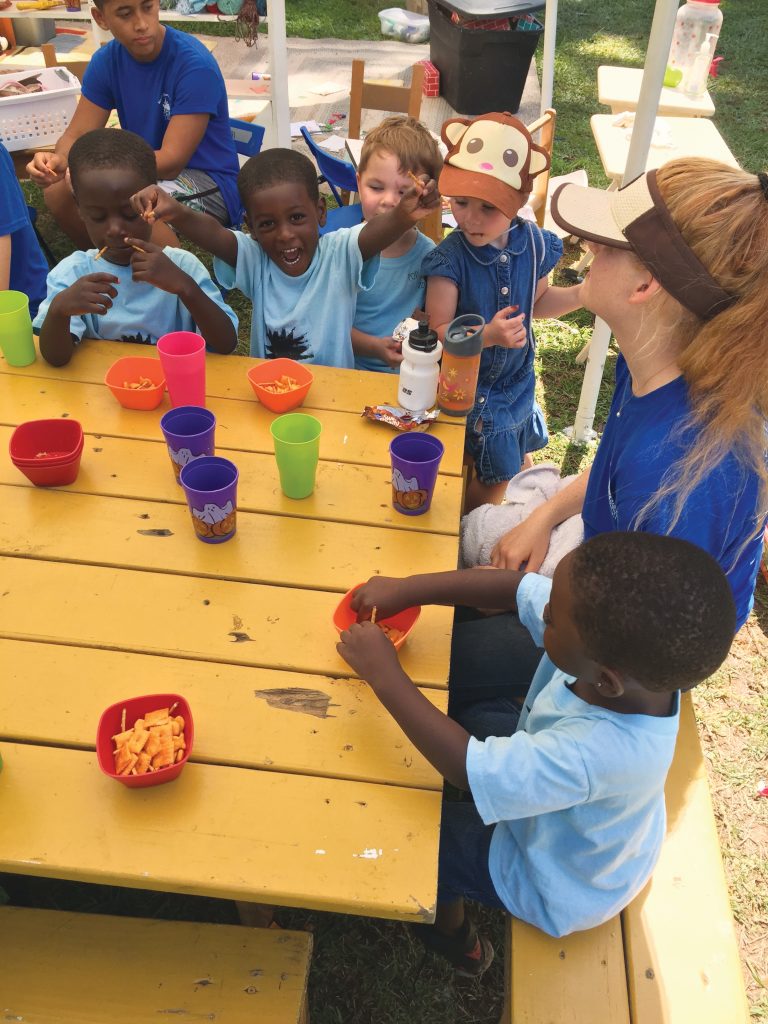