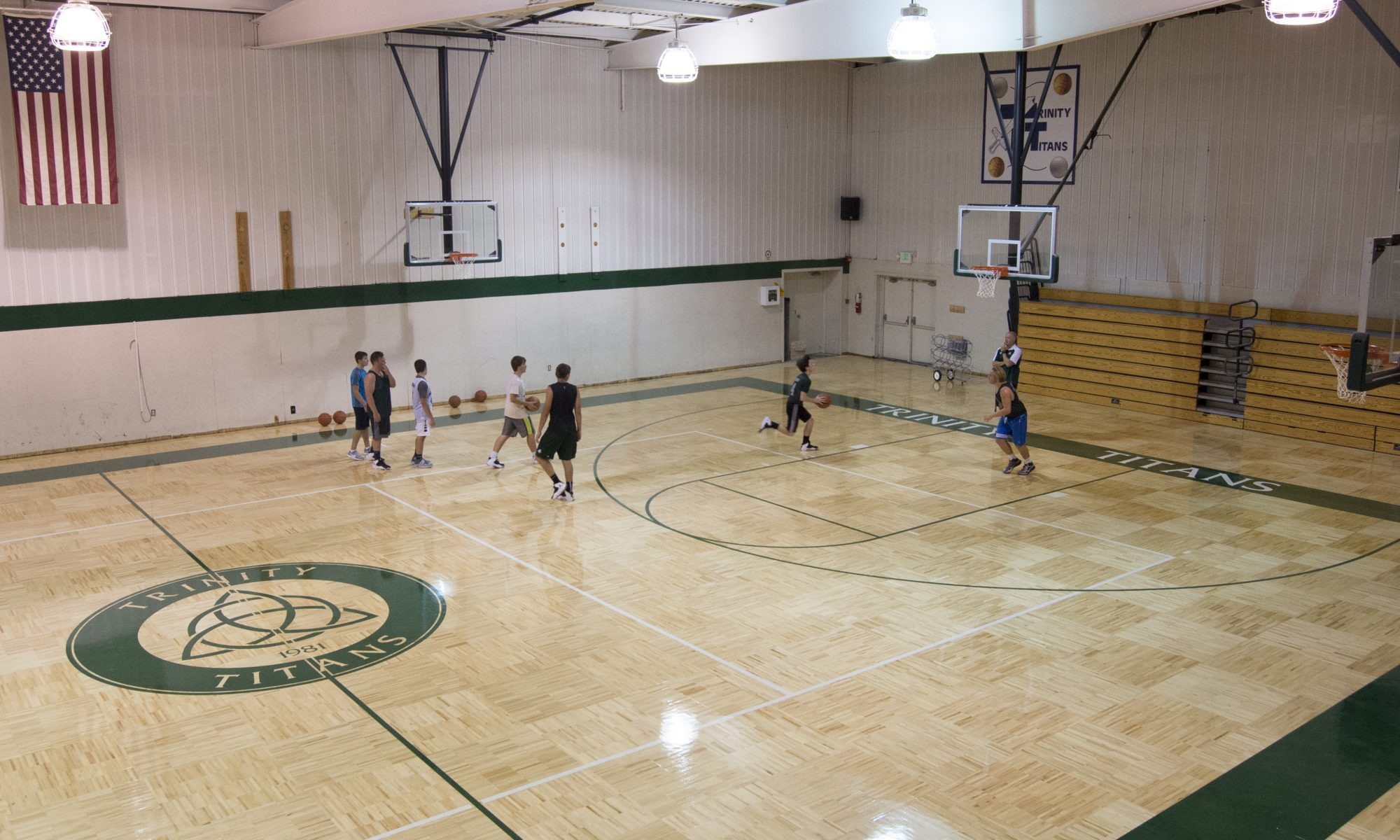 Some of the varsity boys basketball players from Trinity School at Greenlawn got in a little summer practice time on the new parquet floor.

Trinity School at Greenlawn’s athletic center gym floor was destroyed by a flood late last summer. As planning for a new floor began, Mike Gionfriddo, the athletic director, championed the idea of using a parquet pattern. He had in mind the famous floor designed in 1946 for the old Boston Garden, where Larry Bird—a basketball legend who grew up in Indiana—once swished his shots. For Greenlawn’s new floor, Mike hoped for a unique look, for something with “a wow factor, a nice pop.”

Standing on that new floor today, you can see the colors popping. Thousands of maple boards, their hues ranging from dark to nearly blonde, catch the light and gleam like the glazed tiles of a mosaic. Each about an inch wide, the boards are arranged in 3’ by 3’ sections. The direction of the boards changes from one section to the next, creating the same kind of checkerboard look that the old Garden had. Throw in the painted green stripes that adorn Trinity’s new floor, and the visual similarity is unmistakable. (This surely raises a question in the minds of Greenlawn sports fans: If you build it. . . will the next Larry come?)

This beautiful court would not have been possible without the generosity of more than 200 Greenlawn parents, alumni, friends and community members, who rallied like a championship team after a big loss. “The court is a huge gift from the Lord,” said John Lee, Greenlawn’s head of school. “I want people to know how grateful we are to everyone who participated in the fundraising effort.”

As 7.65 inches of water descended on South Bend on August 16, 2016, city streets became like swift-running rivers. Basements filled up like swimming pools and chickens drowned. No one saw what happened that night at the branch’s community center, a modest facility that is also the athletic center for Trinity Greenlawn. The most likely story is that a torrent of water formed in a neighborhood to the north, then surged through a culvert that runs below the Indiana Toll Road. The water swamped a retention pond, then swept across the center’s parking lot and through the building’s lower level like a mighty tide. 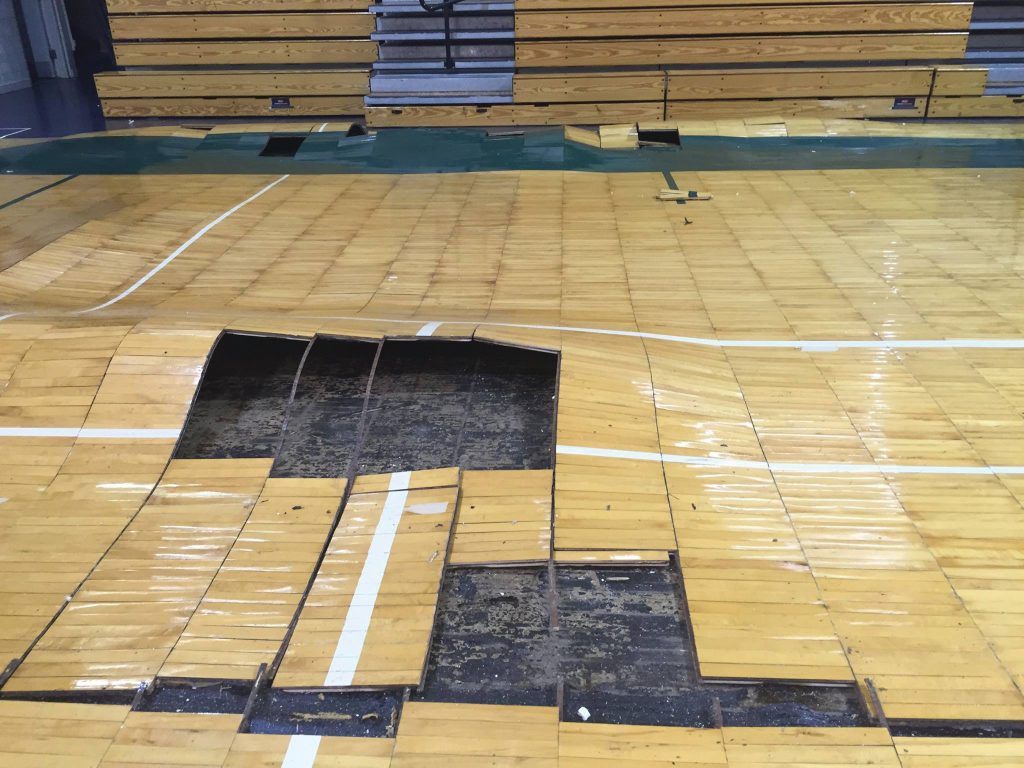 Several inches of rainwater caused the old floor to buckle.

The next morning, Paul Barrett, the facilities manager, found sopping carpet on the indoor soccer field and half an inch to an inch of water on the gym floor. On the exterior walls, he noticed a waterline between six and eight inches high. Then, on a grassy area south of the building, he found thousands of small fish, even one six-inch bluegill, deposited there by the wave of water. “I was almost in shock,” he said.

A contractor arrived later that day with heaters, blowers and dehumidifiers, hoping to save the gym floor. But within a few days the floorboards had swelled, unglued themselves and buckled, forming a series of wooden waves. In the soccer arena, the carpet had to be cut up and thrown away. The contractor did manage to dry out the branch center’s first floor and keep mildew from growing.

Leaders at the school and in the South Bend branch soon learned that the building’s general insurance did not cover flood damage, and there was no flood insurance since the building does not lie in a flood plain. At Trinity, John Lee and John Kurdelak, the school’s director of advancement, had already planned a fall fundraiser to raise $200,000 for scholarships that Greenlawn families count on to help pay for tuition. To pay for a new floor, they estimated they would need to raise an additional $150,000. “We’ve never had to raise that much money in a single year,” John Lee said.

The need for the floor became even more obvious once the basketball season began. Mike Gionfriddo had succeeded in securing four practice times each week at the gym of Stanley Clark, a local private school, and in scheduling home games at another gym owned by the Salvation Army. Between the extra driving and the lack of a home court, morale took a hit. “It was like all games were away games,” said Eli Thomas, a junior on the varsity team.

A big breakthrough came in February, when the Community Foundation of St. Joseph County announced that it would hold a Give Local Day on May 9. On that day, 67 local nonprofit organizations would run simultaneous fundraisers as well as compete for money from a pool of matching funds the foundation offered. The rules state that 25% of the money raised by each organization must remain in an endowment fund held by the Community Foundation for that organization. This meant the school needed to increase its goal from $150,000 to $200,000.

John Kurdelak began talking to his contacts, including a friend of Trinity School who offered to give $100,000 in matching funds. The donor chose to remain anonymous. “It was a very humble, a very generous gift,” John Kurdelak said. “We are extremely grateful.”

The matching gift created more momentum for the project, and John and his team worked intensely to get the word out. On May 9, the gifts came pouring in: $119,000 from Greenlawn’s families, alumni, friends and community members, plus the $100,000 from the anonymous benefactor. Later, the Community Foundation kicked in an additional $80,632 in matching funds, bringing Greenlawn’s overall total to nearly $300,000. “It was easily the most the school has ever received through a single giving event,” John Kurdelak said.

The search for a vendor to install the new floor began, and Connor Sports, one of the nation’s leading installers, was already in the area, working to install floors at Notre Dame. The company submitted a competitive bid and won the contract. Bruce Haroldson, who has put in floors for the Olympics and for the Final Four college basketball championships, came to put in the parquet floor for Greenlawn. 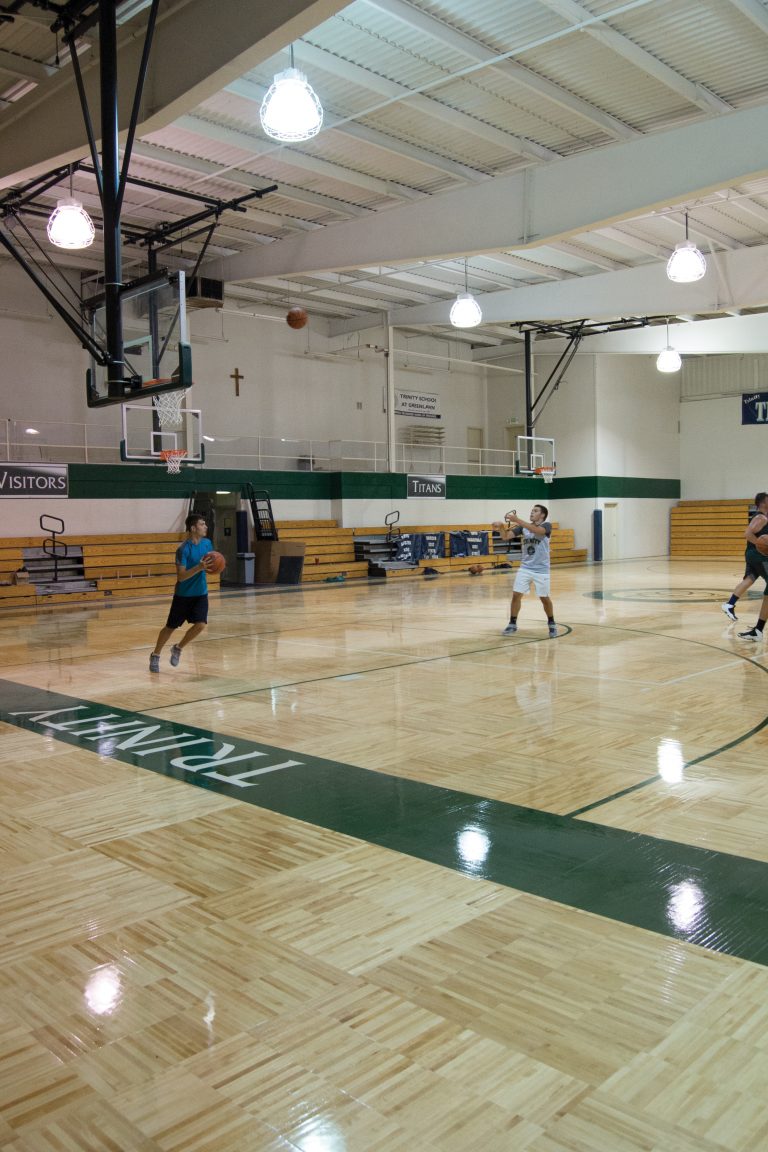 The adjustable goals provide fans more space to walk around the court.

In addition to the floor, six new adjustable basketball goals now hang from the ceiling. Two teams can practice on the court simultaneously, and fans have more space to walk from the entryway to the bleachers.

Trinity still has some money left over, which will be used to pay for a study that will examine the best way to improve the soccer arena.

A plan is also in the works to prevent future flooding. “We’re going to make physical changes to ensure that this kind of damage doesn’t happen again,” said Mike Zusi, who leads the community’s property office. “And we now have flood insurance.”

So, when the school year starts, Greenlawn basketball players will be doing their best Larry Bird impersonations, swishing shots on their new court. In basketball lingo, that means it will be raining buckets.

It’s a good thing we have flood insurance.