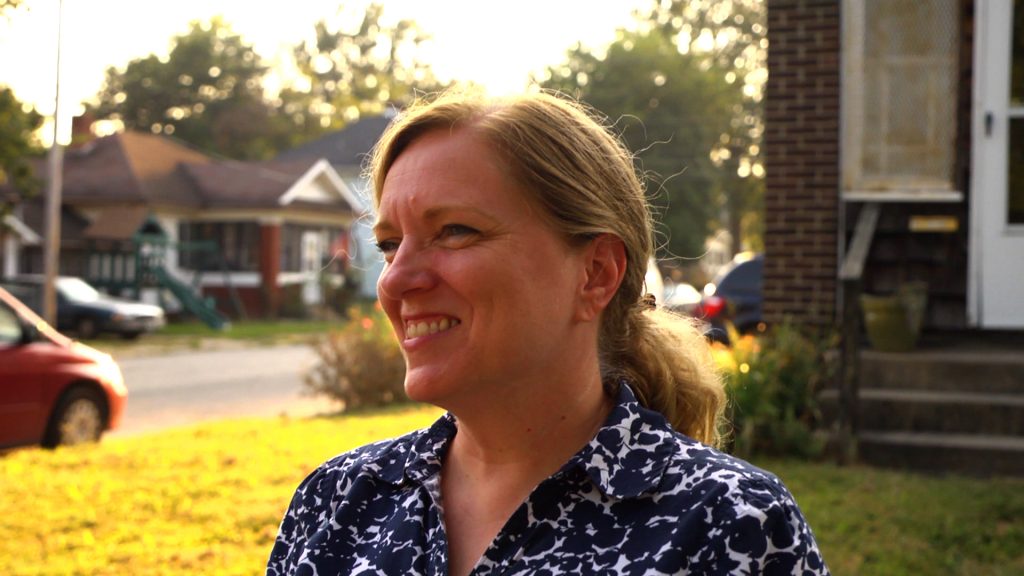 Editor’s note: Chris Vieck is a missionary in the new start in Evansville. She is a member of the Sisterhood.

We moved onto the corner of Linwood and Madison in Evansville on Good Friday, 2012. Right onto the toughest corner of one of the toughest neighborhoods in town. One of our neighbors told us, “You’re moving right into the heart of the hood.” I knew that the Lord had given us those houses and given us that strategic location, but I didn’t realize that he was also going to give me opportunities to experience what life is really like for our neighbors there. I grew up on a farm near Vincennes, Indiana. Our large family always had enough money, and more than enough friends. From there I went to college in South Bend, joined the People of Praise and shortly thereafter became part of the Sisterhood. Because of my education and background, I knew how to speak and behave in such a way that I would be treated with respect. And I always had been. 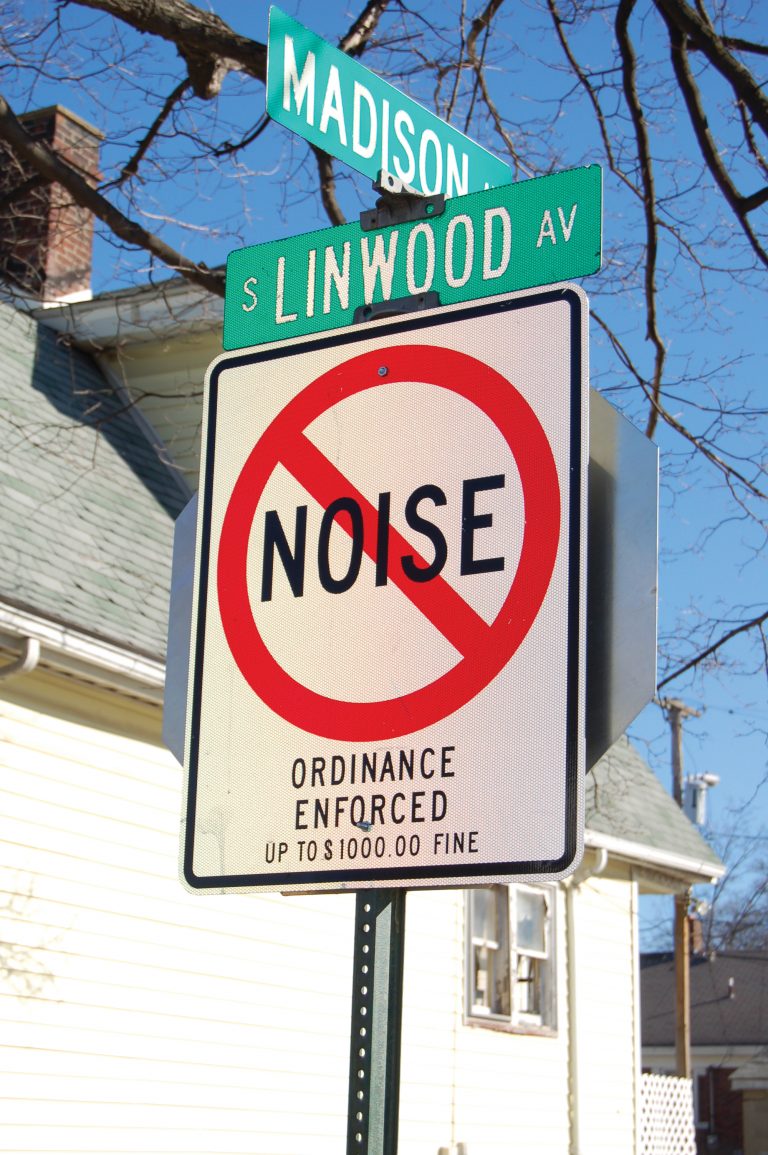 The intersection of Linwood and Madison in Evansville was once referred to as “Devil’s Corner” because it was the site of so many fights and drug deals.

Soon after our household of sisters moved onto the corner, we started getting sick. We’d been cleaning our rental house for days, but we couldn’t get rid of the stench. Was it old urine? Mold? Or, worse, had someone been making meth there? We didn’t know. We just knew that we’d been using gallons of bleach, but the odor in the house was so strong you couldn’t even smell any bleach. We spent two weeks in South Bend while the missionary brothers worked on fixing the problem for us. New cabinets and countertops, ductwork cleaned, a new ceiling, black mold removed and a repaired furnace later, the problem was fixed. It turned out that thousands upon thousands of cockroach carcasses (thankfully, long dead) were responsible for that sickening smell. That was a first taste of what it’s like but, unlike our neighbors, we had the manpower and means to fix it.

Once the smell was gone, I was so eager to be in the neighborhood. I slept like a baby that first night, but within a week I started waking up in the middle of the night, anxious and afraid. I didn’t know why. I thought it was the enemy, so after our neighborhood women’s group one night I asked for prayers. During the prayer, Netesha got a word from the Lord: “God wants you to know what it’s like for women in this neighborhood, only they don’t know how to fight.” When she said that, I remembered hearing neighbors talk about what sounded to me like paranoia at night. Netesha was right, they didn’t know how to fight, how to pray against the devil. God had given me another taste of what our neighbors’ life is like, but, unlike them, I had the means to fight. After the prayer, I went back to sleeping soundly.

A year or two later, on a warm summer afternoon, I went to visit Mary, who lives a few houses down from us. I had been talking with Carrie Johnson when I realized I was supposed to meet Mary at one o’clock. She didn’t answer the door, so I started jogging back to Carrie’s house. While I was running, a shiny white SUV pulled up next to me. The driver was wearing a White Sox cap and jersey. He yelled at me, “Hey, come over here! It’s the police!” I thought, no way! All I could think of were stories I had heard of men impersonating police officers and abducting women, so I kept going. He kept yelling at me, and finally he flashed a set of police lights and blared the siren for a second. So I stopped. I still didn’t know what was going on, but I was cornered. He got out of the car and flashed a badge. Again, I thought of the stories I had heard: don’t believe a flashed badge. Right away, a shiny black sports car pulled up as well, and that guy got out too. The first guy yelled at me, “I told you, we’re US marshals! When I say stop, you stop!” I wish I’d had the presence of mind to say to them, “Do you know what neighborhood you’re in, accosting a woman like this?” But it all happened so quickly I couldn’t think straight.

Two of the missionary brothers, Evan Lent and Joe Cassell, had seen the whole thing from their house, and they tried to approach me to help out, but the second marshal kept them back. They couldn’t get closer to me than 30 feet. I was totally alone, and I was so confused. What was going on? Why were they stopping me? What had I done wrong? Why was he yelling at me?

The first marshal started grilling me, and he was very aggressive. I was so intimidated. “Why were you running? What’s your name? Who were you visiting? What were you doing there?” I told him I was a Christian missionary, and I was going to see Mary on a mission visit. He said, “How do you know her? Do you know that she’s wanted?” I knew she was on probation, but I didn’t know she was wanted. My heart sank at the thought that this woman, who had been working on turning her life around, might have committed another crime. He kept questioning me. I felt totally powerless. I couldn’t get anywhere or talk to anyone. They could have easily taken me away. I’d never been so intimidated, accused, disrespected and completely unable to defend myself.

The angry questioning went on for a while and finally the marshals decided that my story was legitimate and I couldn’t help them find Mary, so they both left. I was surprised by how shaken and confused I was by the experience. I still didn’t know what had happened or why it had happened to me. 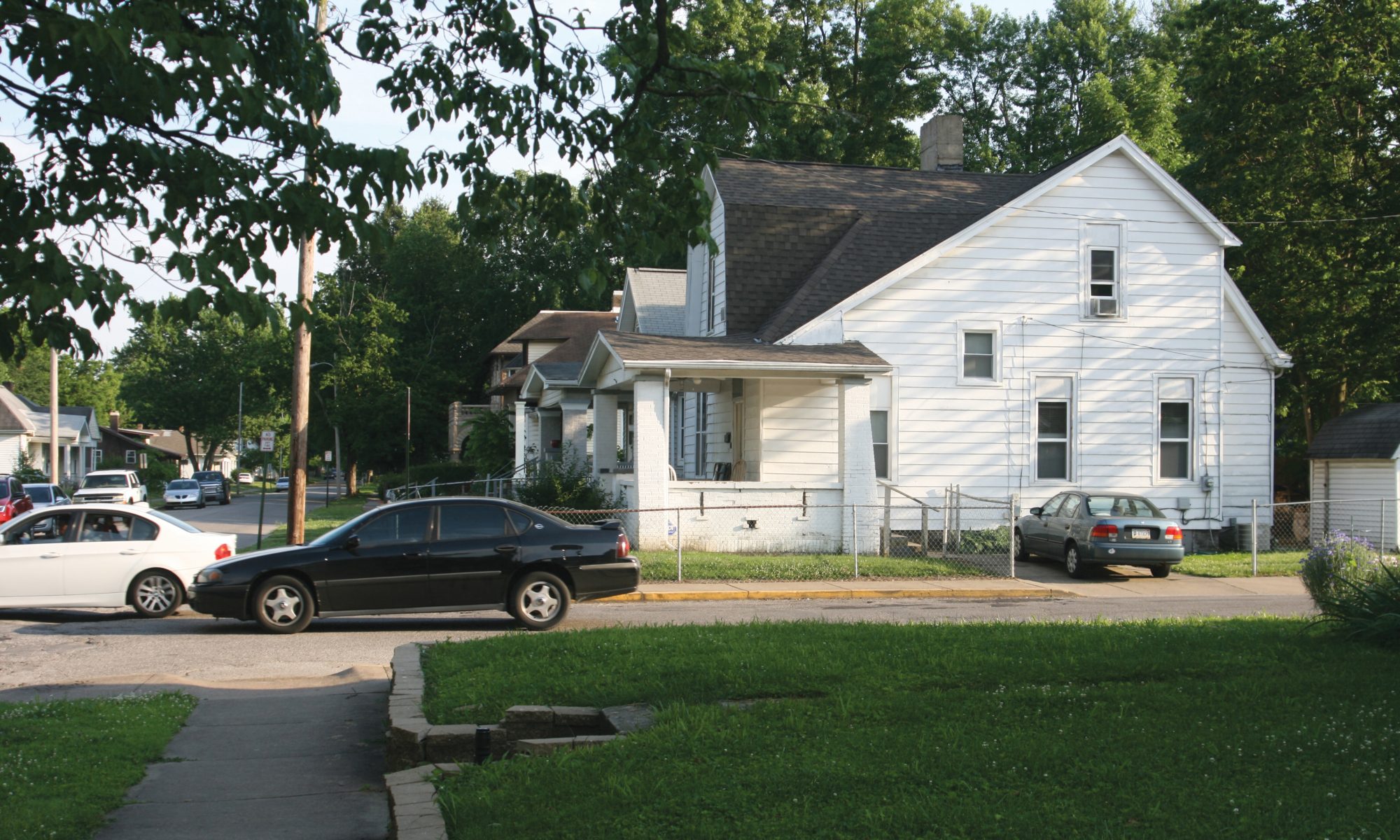 The house the missionary men live in, which houses the main kitchen, dining room and meeting room for all the missionaries.

That evening, we had a prayer meeting at our house. Afterwards, some of the sisters were praying over one another. I still felt pretty shaken, so I decided to ask for prayers. When they started praying over me, one of the neighborhood women, Tyresha, got a word from the Lord. She said, “God wants you to know what it’s like.” After she spoke her word I remembered that Tyresha had been in jail. She had spent some years in prison. God was allowing me some share in our neighbors’ experience of life.

Later on, Mary found out what had happened to me. She told me that when I knocked on her door she was in the waiting room at the probation office, hoping to explain her plan for catching up on her probation payments. She hadn’t committed any new crimes, and it really didn’t make any sense that they would have sent the marshals after her: she’d been sitting right in their office for hours!

I think there’s something of the Incarnation in these experiences. Jesus already knows what it’s like to live in these houses, to be one of the neighbors, to experience fear, sleepless nights and disrespect. He’s letting us feel what he feels, which is what our neighbors feel. I thank God for giving me some share in the experience of our neighbors’ lives.

He’s given me a gift. I wouldn’t trade it for anything.