Meet the Board: Sean Connolly 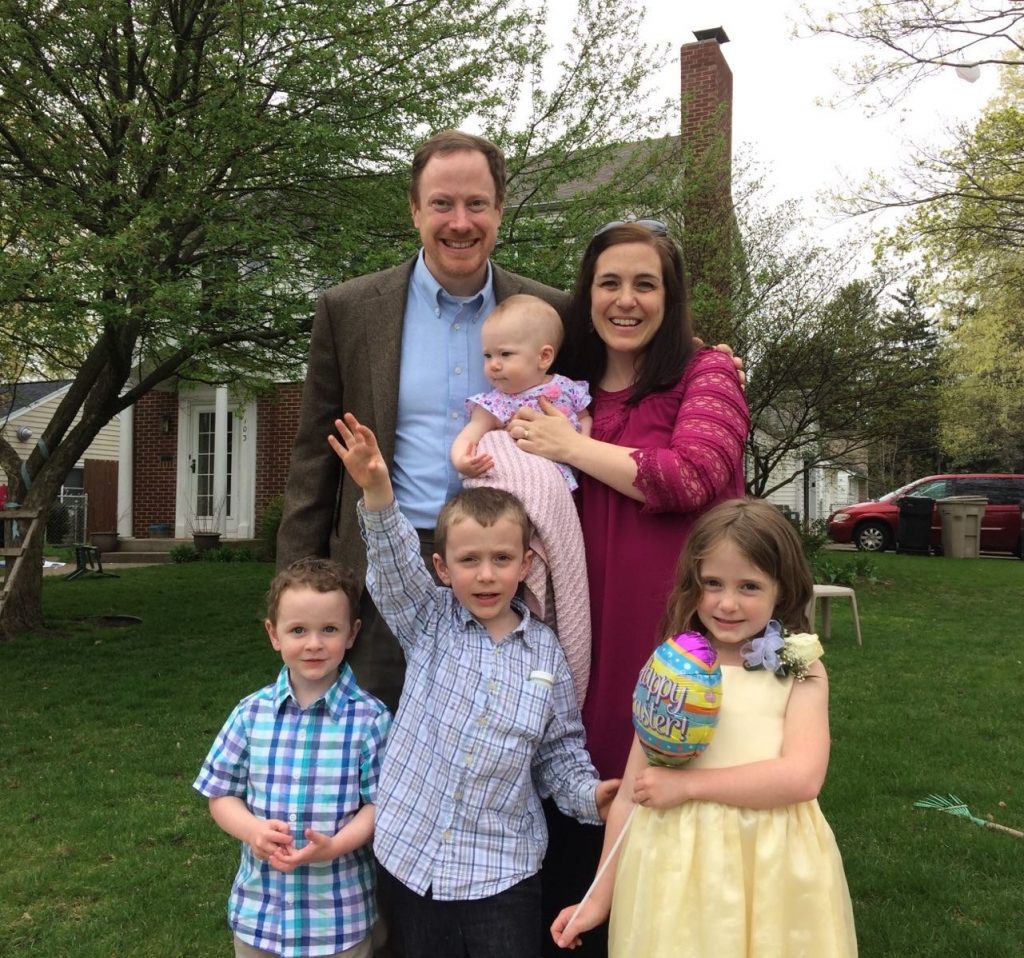 Sean and Gretchen Connolly with their four children.

The clock read three hours, eleven minutes as the man in the “Christ in you” t-shirt completed the 2016 Twin Cities Marathon. Twenty-six straight sub-7:30 minute miles. No mean feat. But one minute short of qualifying for Boston, the father of road races. To qualify—and he will qualify—he has to do it all over again. One minute!

Sean Connolly (South Bend) is the board of governors’ newest member, elected in 2016 to a six-year term. Program coordinator for communications, he oversees the People of Praise website, directs publication of Vine & Branches, authors e-mail news blasts, and works with Greenlawn Films on the video productions you may see from time to time. His motto: “See the Lord and make him known.” Overall Coordinator Craig Lent calls Sean a “student of communication,” an “ideas and words guy” whose work for the community is “invaluable.”

Sean’s devotion to running dates to high school. In the fall of 1994, as a junior, he came to the South Bend branch community celebration 10K race thinking: “I’m gonna win this thing!” At the start, he noticed another runner in serious gear and realized he might have a race on his hands. He set the pace, but could not shake his man. Neck and neck most of the way, Sean finally out-kicked him at the end. His rival, Paul Langenfeld (Servant Branch), dogged Sean after the race as he had during it. Paul reached out to befriend Sean, who initially “blew him off.” But his persistence paid off, and they began to run together. Paul related to Sean as to an adult, encouraged him, prayed with him. As Sean recalls, “it was the start of my adult Christianity.”

Sean’s head Paul DeCelles (South Bend) oversees the work of the program offices. He notes that Sean has pastoral responsibility for a group of about 20 adults plus children living in and around the Greenlawn campus who support the program offices in what is called “the work college.” In addition to the “phenomenal amount of work” Sean undertakes, Paul says he has “a fantastic pastoral touch,” helping foster a “striking degree of unity.” He is, Paul says, “a peacemaker, very wise.”

After graduating from Trinity at Greenlawn, Sean spent four years at Notre Dame, came underway, and earned a B.A. in philosophy. He was a member of the planning team for the community’s second High Country Adventure, as a result of which youth ministry was transformed into an opportunity for younger brothers and sisters to do hard things, to build homes, cities, and to preach good news to the poor.

Helping lead this transformation, Sean, Nick Holovaty (Mission program coordinator, Evansville) and J-T Kelly (Mission division, Indianapolis) were commissioned to search for a place our high school students could hold a summer camp. A road trip brought them to Shreveport, where they asked a game son of the branch to drive them to “the worst part of town.” They were soon after turning off Murphy Street onto Yale Avenue.

Sean was among the first brave souls to move to Allendale, building houses and friendships with neighbors, challenging defiant teenagers on those first Action summers to live radically for the Lord and heading the first household of men and women there as they put their wallets where their mouths were. In 2005 he returned to South Bend to begin work as a writer and acting publisher for Vine & Branches. In 2009, he married Gretchen Rolland, another of those brave souls, part of that first household and a fellow worker in communications. The two are now six.

Full-time work, broad pastoral duties, a family and, if that’s not enough, his sights set on Boston… so if you happen to wander onto South Ellsworth Place, a block east of Greenlawn, on an April afternoon, a warm spring rain falling, you might see an athlete out for some serious training, with the three oldest kids in tow. No umbrella, no raincoats. “Okay, kids, a quick sprint down to the corner and back. Let’s see just how soaked we can get.” The little ones giggle as the four squish off through the lawn. And that must be Gretchen, holding the baby, shaking her head and smiling. Sean looks back: “Serious training going on here, serious. Right, kids? . . . just give us one minute.