Girls' Group on the South Side of Indy 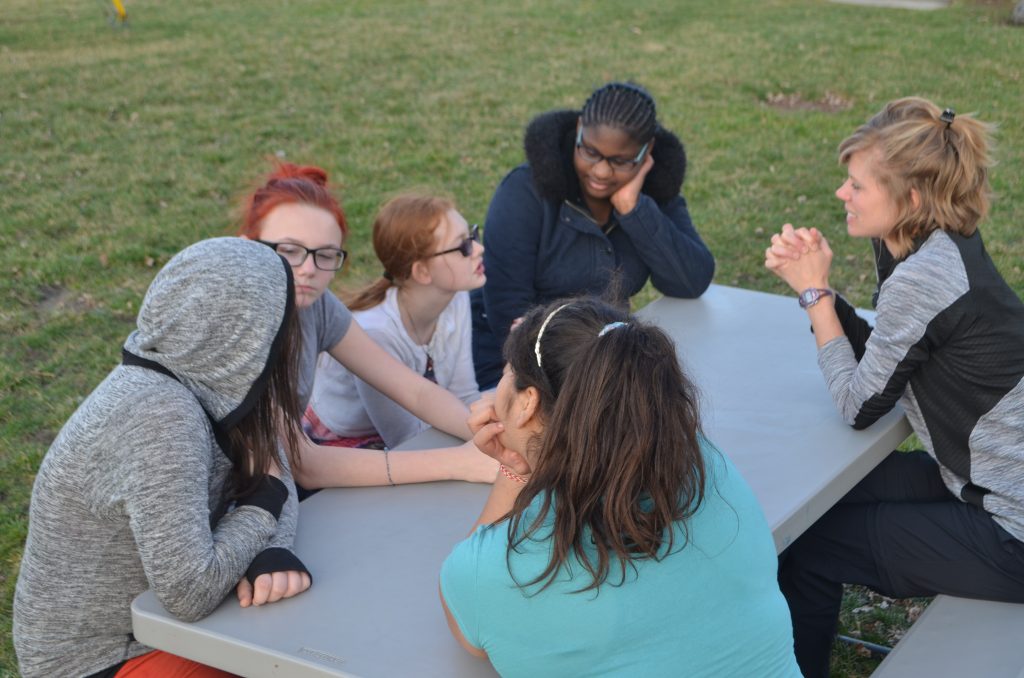 The older girls' group gathers to share about their week while waiting for their pre-Bible story snack. Ellen Putzier (right, seated).

by Elizabeth Grams and Sean Connolly, with reporting by Anne Osterhouse

South Side girls come from all kinds of families and have all kinds of troubles. There’s Isidora, the nine-year-old Mexican whose mother speaks the tiniest bit of English and whose father isn’t in the picture - probably he’s back in Mexico. There’s Charity, a teenager whose older brother has landed in jail, and who has already run away from home once. There’s Virginia, the girl whose mother broke down in tears as she told one of our missionaries that the family would be evicted.

The girls have relatives in jail, or an unmarried 18-year-old sister who just had a baby, or an older sibling dabbling in Wicca. A few have no bed to call their own, just a sofa or a mattress shared with siblings. Some are shuffled from house to house and relative to relative.

They have questions: What do I say if my brother is mean to me? If another girl hits me at school, what should I do? If God can do anything, why do people sin? Why do people die?

On Monday and Tuesday afternoons about two dozen of these Indianapolis South Side girls, ranging in age from five to twelve, come over to community houses and spaces for girls’ group. They come to be together, to see friends and their older sisters in the Lord—members of the Christians in Mission team, the Indianapolis campus division and the Indianapolis branch. They come to learn about God and find answers to their questions. 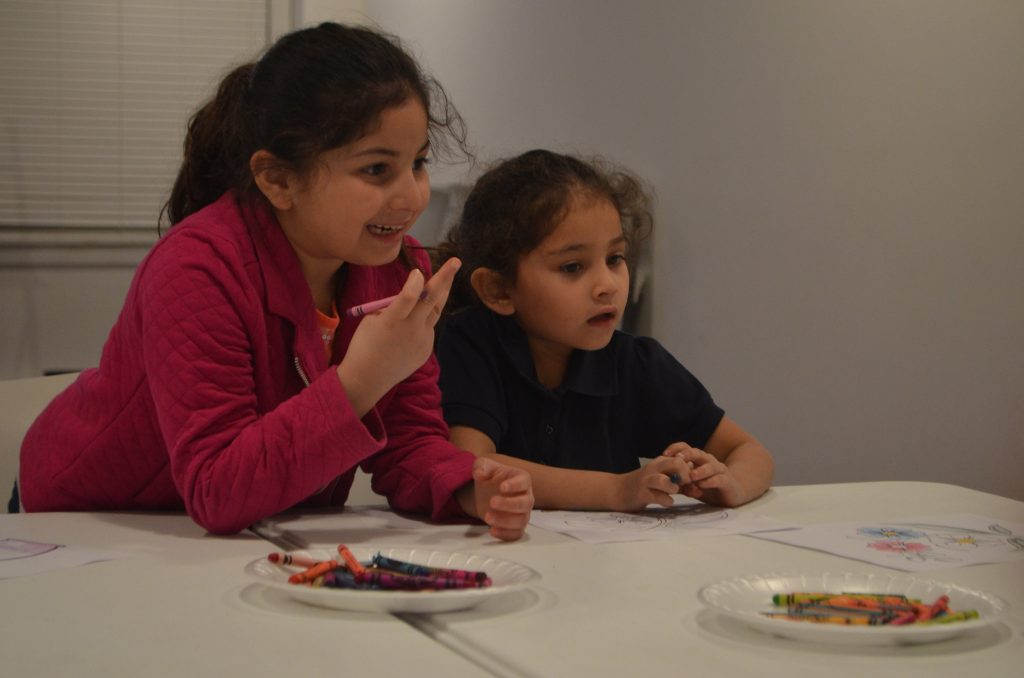 Two girls color together at the beginning of their girls' group.

Jeff Brummer drives out in his old GMC van with one of the women to pick up the girls. The girls often run out of their houses, eager to hop in. In warmer weather, they sometimes walk to girls’ group singing at the top of their lungs the songs they learned at summer camp.

Once they’ve arrived, they play relay races and tag games in the green space that runs behind several of the CIM houses, or work on crafts in Cornerstone Commons, an apartment building a community member owns. They’ve learned to say the Lord’s Prayer, to turn the other cheek, to use simple table manners, to honor one another, and to say “I’m sorry.” Over a snack they listen to stories from the Bible and talk about what the gospel means for their lives. They pray together. 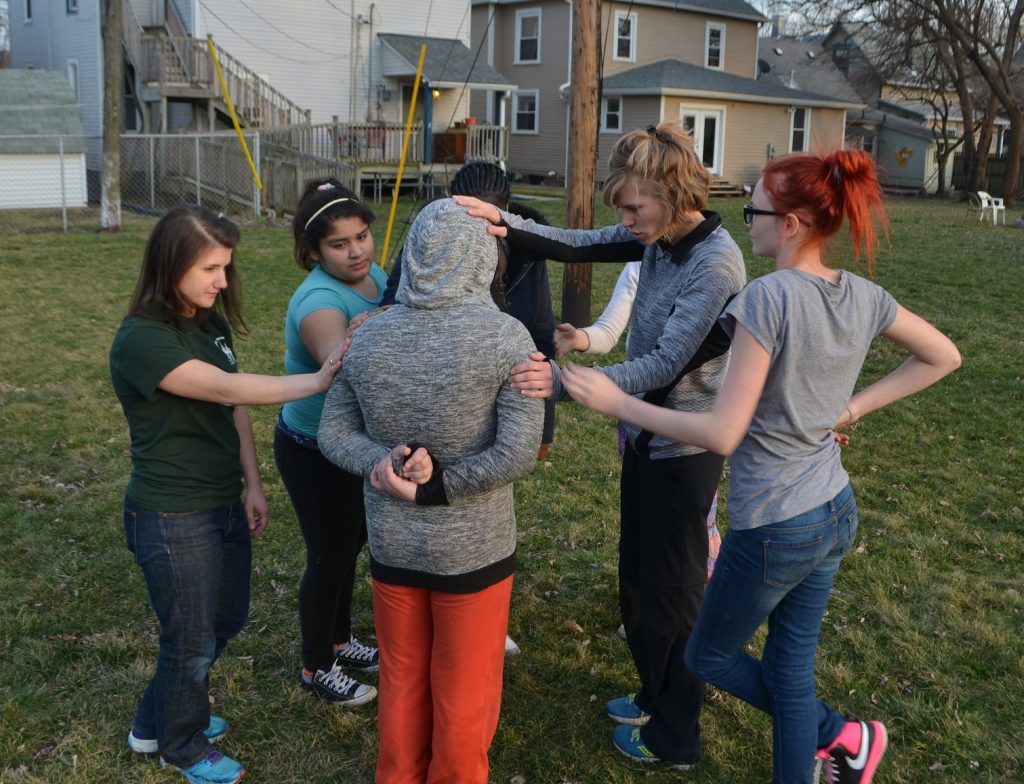 One of the girls asked the other members of her group to pray against her earache.

In the fall, Isidora and her mom came to the tent meeting hosted by the CIM team. There, the mother spoke with Vivian Tragesser (Indianapolis), a fluent Spanish speaker, and Vivian laid hands on her and prayed for her. Seeing her mom receive prayer, Isidora and all her friends went up and asked for prayer, too. 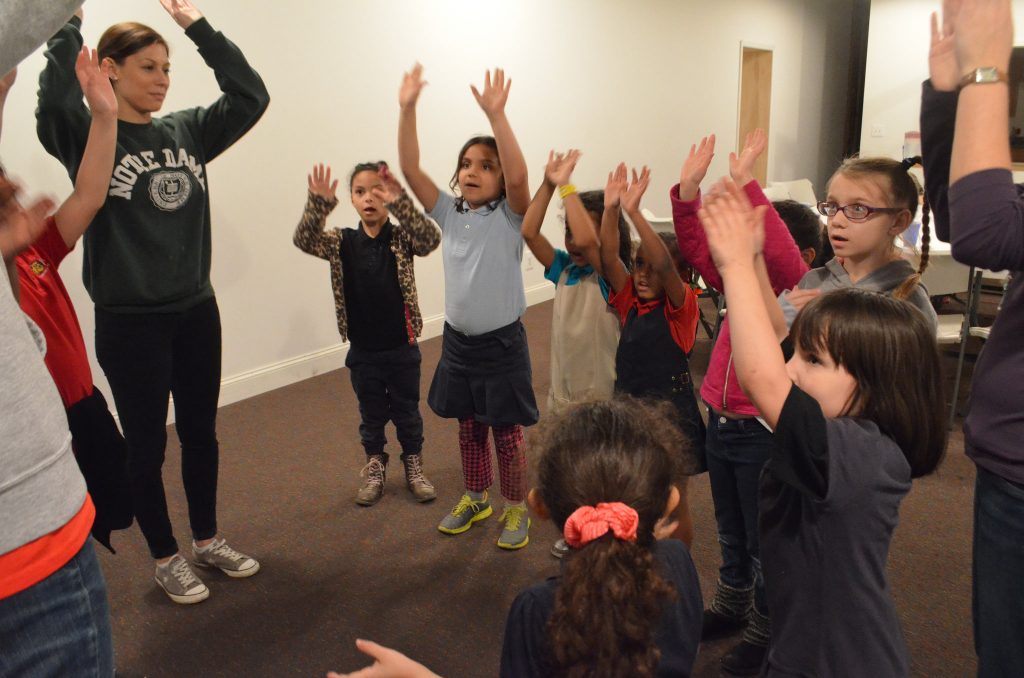 The younger girls' group usually end their time together by singing.

One girl, Britney, came to talk with Ellen Putzier after her brother threw her prized MP3 player down a drain. It was a gift from their father, who had just gotten out of prison, and Britney was visibly angry. Britney and Ellen talked about what they’d been discussing in girls’ group the previous few weeks—forgiving enemies like Jesus did on the cross. Britney’s face eventually softened. Before she left, she told Ellen, “I want to forgive him.”

Last year the Indianapolis branch covered costs to send one of the girls, Taylor, to Buffalo camp. When Ellen went to ask Taylor’s mom about it (Taylor’s parents were separated), the mom’s eyes welled up with tears. “Of course, she can go,” the mother said. She was so moved she could hardly speak, as Ellen recalls. Taylor now asks the CIM women regularly if she can come to camp again this year.

Hannah Roth (Indianapolis) recalls a moment when one girl kept lagging behind the others during their walk to girls’ group. Finally, she confronted Hannah in dramatic fashion. “Miss Hannah, just leave me. I’m too slow.” Hannah looked at her and laughed. “I’ll never leave you. If you need to walk slow, that’s fine.”

The next week, the girl approached Hannah. “Miss Hannah, you love me, don’t you?"

“Because you wouldn’t leave me last week.” 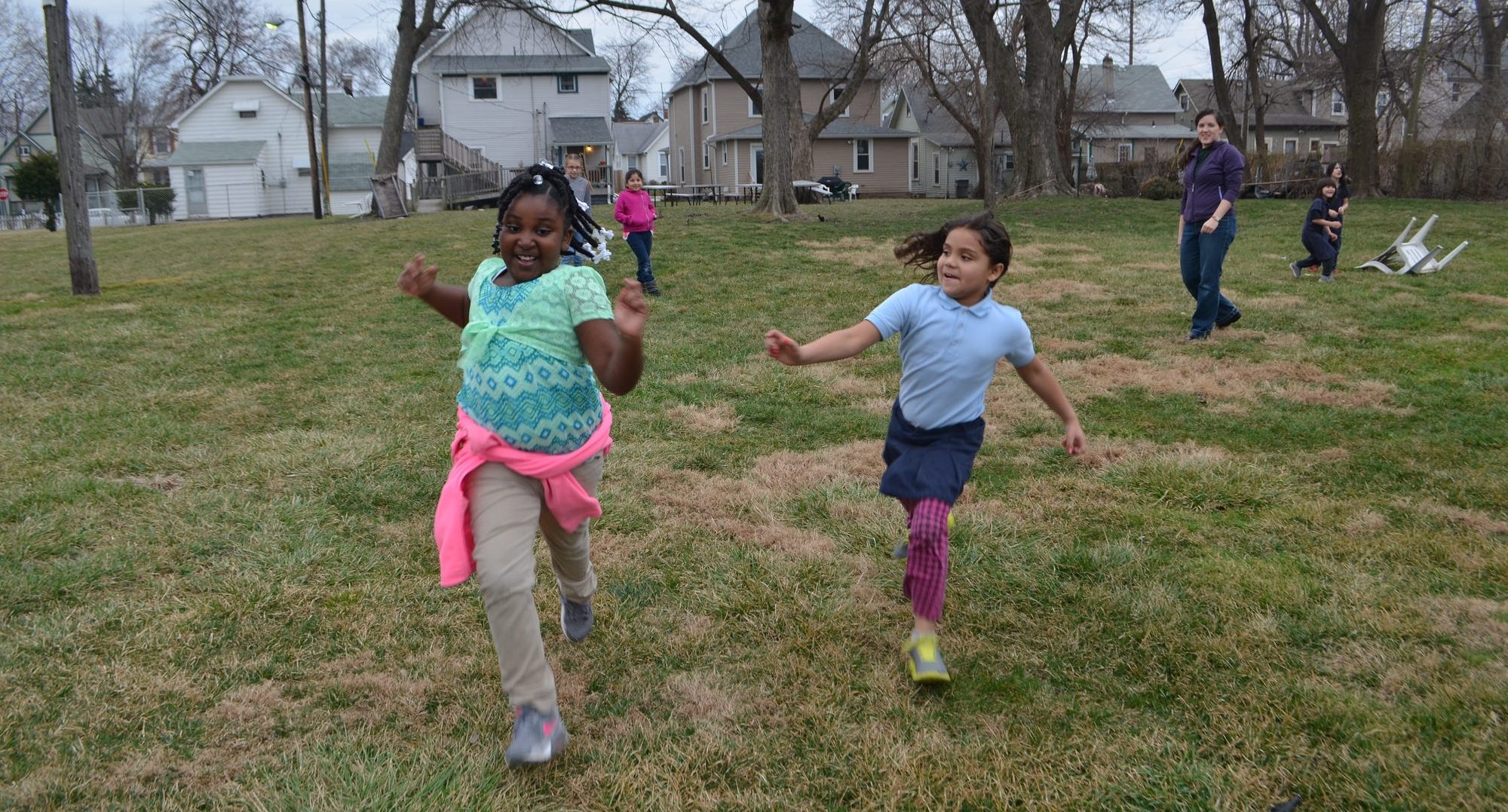 The younger girls' group enjoy running around in a game called Refrigerator in the green space on the block.

Naomi Coney senses the high stakes for these girls when she looks at the ones who have entered their teenage years. She prays for Charity, the girl who ran away (she’s home now), each time she walks past her house. She prays also for another teenage girl, once as eager for God as the girls now coming to girls’ group, whose Facebook page reveals the lure of illicit sex and worldly attention-seeking. “These kinds of things move me to want to do all we can to give these girls the tools now,” she says—tools of Christian teaching and, above all, Christian friendship, to anchor them when trials and temptations come.

It’s what girls’ group is all about.