Decked out on the Patio 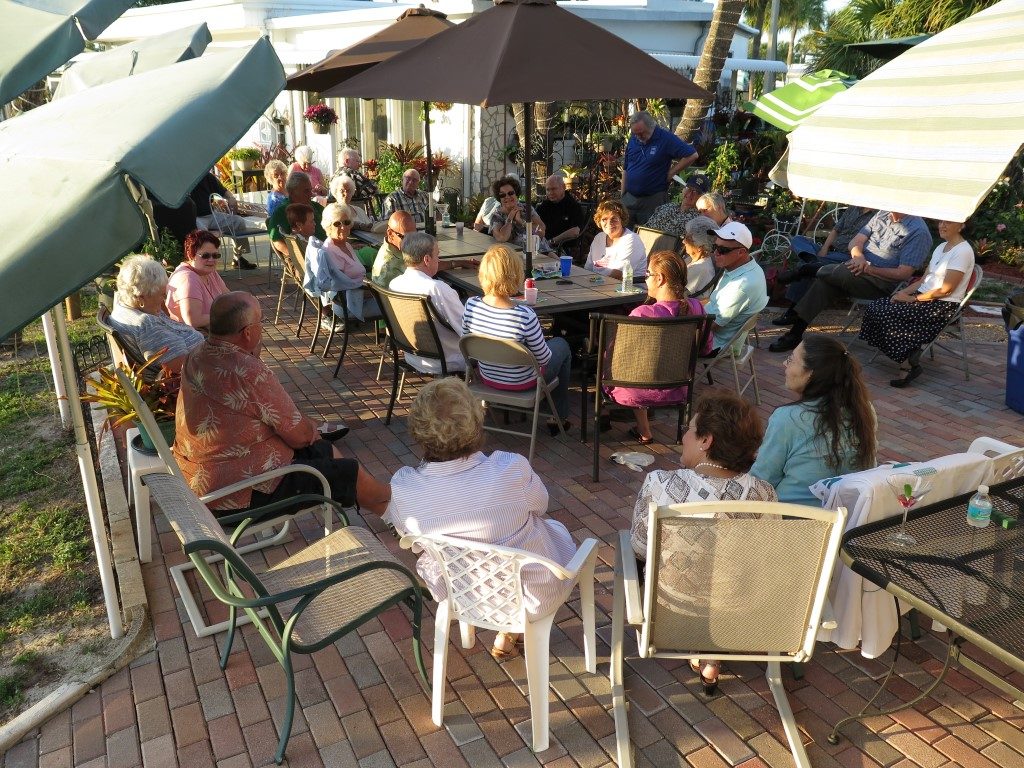 A common sight in Tampa—a party at the shared patio of Ed and Josette Konczeski and Fred and Sue Smith.

Two couples in the Tampa branch, Fred and Sue Smith and Ed and Josette Konczeski, have created an attractive space for common life between their homes. The curved and meandering 40-foot-long patio is shaded by bending palm trees, surrounded by flowering bromeliads and just a few feet from the waters of Old Tampa Bay. It has become a go-to spot for branch activities and outreach to the neighborhood, with Lord’s Day meals, birthday parties, men’s and women’s gatherings, an Easter brunch and even a root beer float party.

The two homes are located in a prominent place within Regency Cove, a retirement community of narrow streets and tightly spaced manufactured houses on the Interbay Peninsula in south Tampa. “People must pass by to get to the observation point overlooking the bay,” says branch leader Tom Brophy, “and neighbors frequently see us getting together. They hear our music and singing, and the fact that the patio is shared is a conversation starter.” 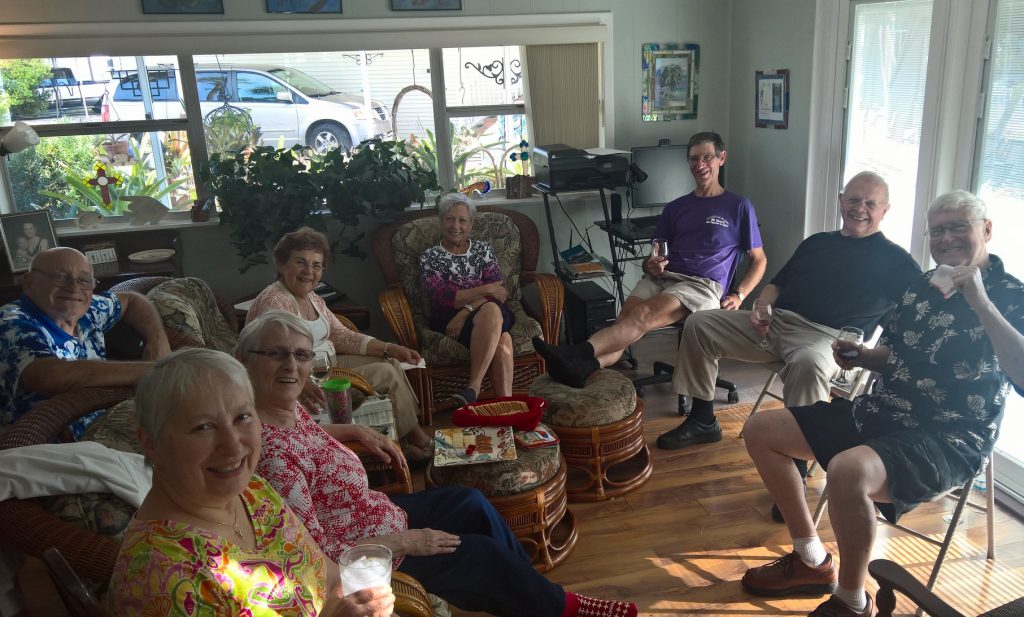 Ed and Josette hosted a get-together in their home on the occasion of a visit from John Boughton (South Bend) last fall.

Branch activities have started shifting to Regency Cove from Fountain Boulevard in Tampa, a street which has been home to several branch families. The Smiths’ house is large enough to accommodate the entire branch, and the branch has been meeting there every other month. That shift will accelerate when Tom and his wife Jackie occupy a new home just down the street from the Konczeski and Smith homes sometime this spring. In addition, Geoff and Sue Kelleher and Jeannie Hopper (all South Bend) rent a home together in the neighborhood during the winter months, and join the Konczeskis and Smiths for dinner once each week.

The story of how these couples landed in Regency Cove begins in 2013. That year Fred and Sue, then living 15 miles away from Tampa in Riverview, FL, decided to move closer to the city. They asked Ed to help. He pointed them to Regency Cove, a 75-year-old development with low taxes and shared ownership of all the property. The Smiths found an empty lot they liked, right on the water, but it was too expensive. They were close to buying a different property, but the owner of the first lot contacted them with an offer that was quite a bit lower than the initial price. The Smiths accepted the offer and began designing their home. 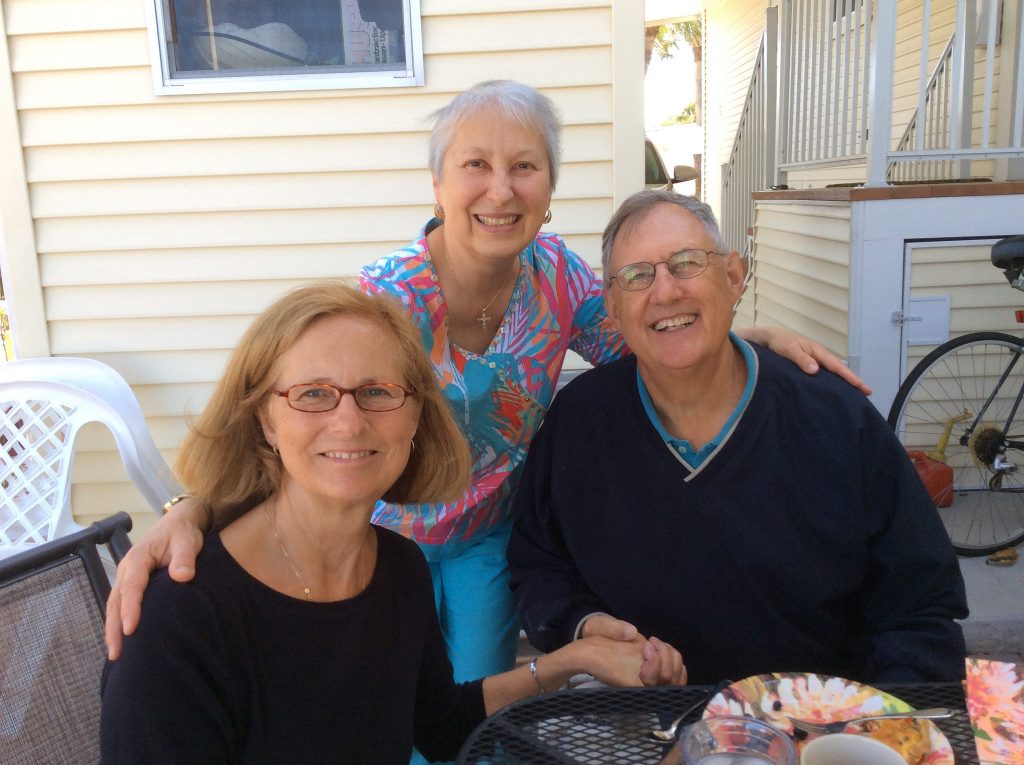 Meanwhile, Ed and Josette had begun to consider leaving their home on Fountain Boulevard, where the taxes were rising fast as developers bought old houses, tore them down and erected larger, more expensive homes. Sue learned that the house next door to the Smiths’ lot was going onto the market. She called the Konczeskis and said, in a half-joking way, “How badly do you want to be our neighbors?”

A few days later, Sue, Josette and Bonnie Folvarcik were out shopping and Sue invited them to stop by and see their lot. Josette, looking at the house next door, had the feeling that she and Ed needed to act quickly if they were going to buy it, so she made a quick call to Ed. She couldn’t write a check that minute, so Sue and Bonnie got their checkbooks out and covered the $2,000 in earnest money. Josette placed the money in the owner’s hands.

“Not five minutes later, the owner’s phone rang,” Josette recalls. “It was another interested buyer.” 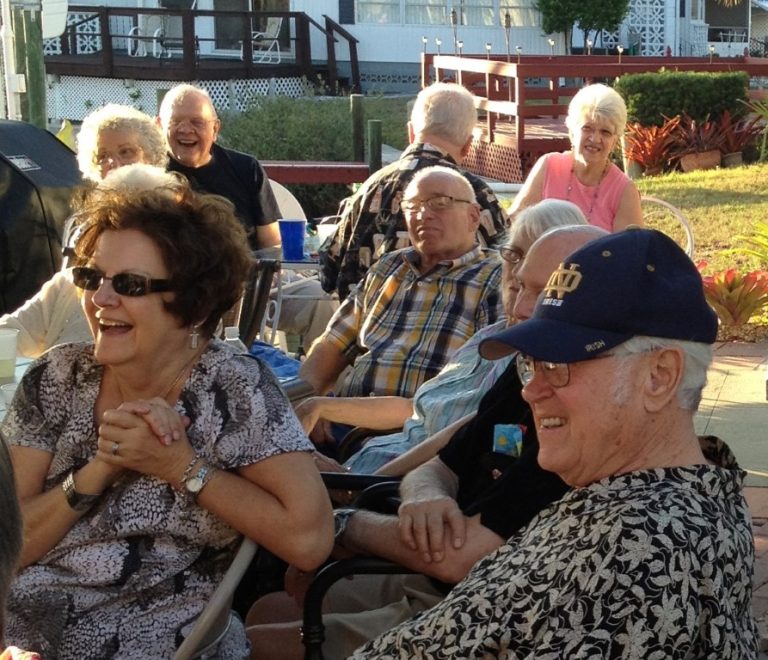 The patio was the ideal place to celebrate Fred Smith’s 80th birthday in 2014. Fred is in the foreground.

In September of 2013 the Konczeskis moved in and the Smiths moved in two months later, once construction on their home was complete. Fred and Sue’s home is positioned on the lot to create the maximum amount of space for the patio, which is two-thirds on their property and one-third on the Konczeskis’—although Sue is quick to say that they don’t think of it that way. Fred adds, “The layout, pavers, lights and plantings all have Ed’s touch.” The patio can seat 26 people for a dinner and can hold more for a party.

Besides creating the patio, the Smiths and Konczeskis have come up with a variety of ways of meeting and interacting with their neighbors in Regency Cove. Ed’s home renovation business now consists primarily of work for other residents of Regency Cove. Sue has started a quilting group which meets at the Regency Cove clubhouse, and the Smiths take communion to homebound Catholic residents of the neighborhood, often praying with them during their visits. They attend a neighborhood Bible study and drive sick neighbors to doctor visits.

“We have lots of opportunities to be Christ to people,” Sue says. “We just get up in the morning and ask the Lord what he wants us to do.”