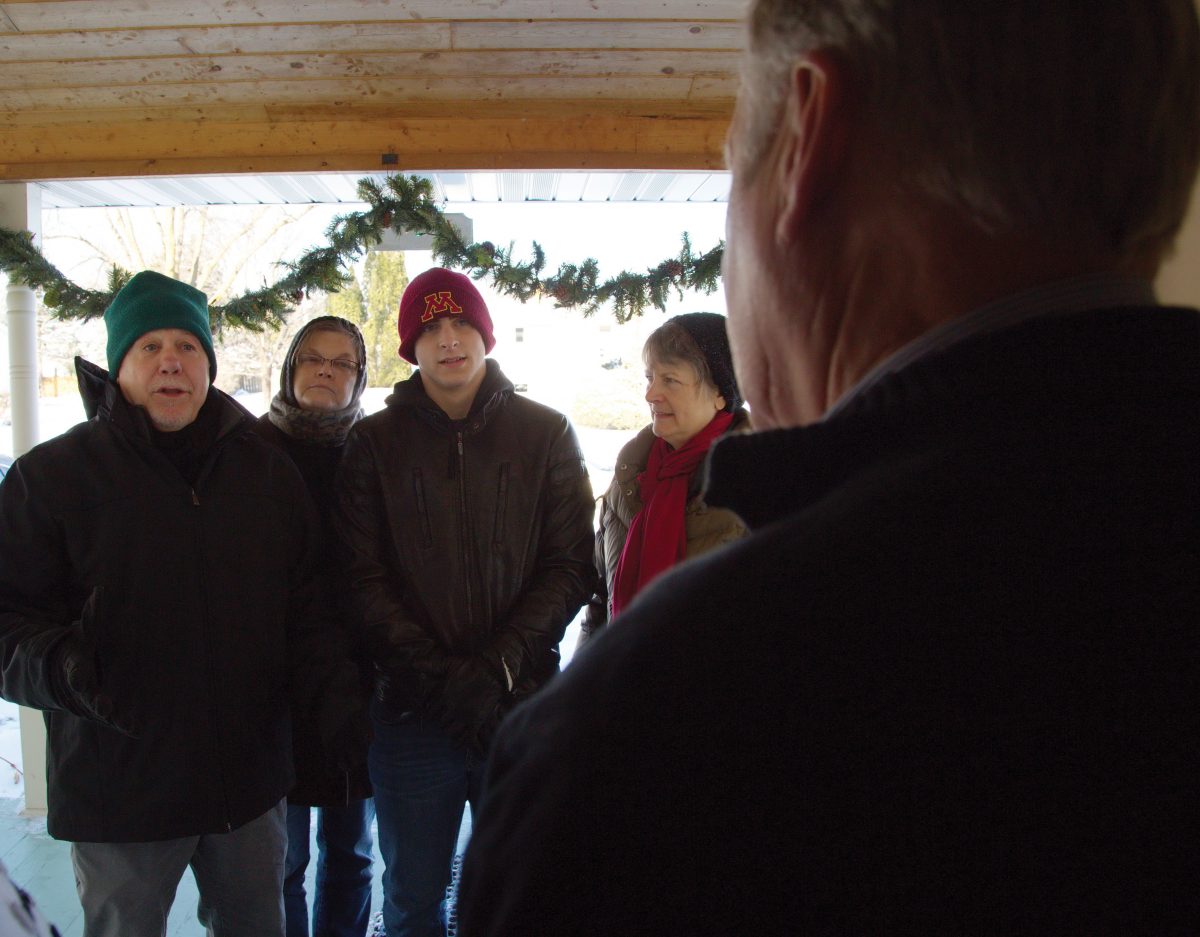 One Saturday morning in Burnsville, Minnesota, Bruce Olson (Servant Branch) walked up his neighbor’s driveway with fellow branch members Norma Cahill and Pat Murphy. A woman had her garage door open and was getting ready to leave.

“Hi. We’re Christians, and we live in this neighborhood. We’re asking people if they want to pray with us for this country,” Bruce said. The woman paused, then said, “Okay, sure,” and the four of them held hands in the driveway and prayed.

“Is there anything specific we can pray for you for?” Norma asked. “My husband has been having headaches,” the woman replied. “We’ve taken him to doctors, but we haven’t been able to get a diagnosis.” They prayed with the woman for God’s healing and grace, then Bruce looked up and saw tears streaming down her face. As the group walked down the driveway, she called out, “You guys are doing a great thing.”

Over the last two years, a group of Servant Branch members led by Pat Murphy has met over dinner in one another’s homes to talk about outreach in their area. They all live in Burnsville, a Twin Cities suburb that is home to over 30% of branch members. The composition of the group has fluctuated, but it usually includes Pat and his wife Lee Ann, Bruce and Charlene Olson, Bernadette Fossen, Mary Radtke and Jim and Norma Cahill. “We sensed the Lord wanted us to get together in Burnsville to see what ways there are for us to reach out to people,” Pat said, but whenever the group discussed knocking on neighbors’ doors, many of them felt uncertain. They thought that door-knocking was for poor neighborhoods and wouldn’t work in the suburbs.

Still, urged on by good experiences when door-knocking on the West Side of St. Paul and while visiting the new starts, they decided to set their fears aside. They started going out on Saturdays in groups of three or four. What they found surprised them. “People are pretty open,” Bruce said. “Even those who didn’t want to pray with us would tell us their life stories.”

In one cul-de-sac they met a woman working on her lawn mower. At first, she seemed cold and didn’t want to pray, as Bruce recalled, but they continued talking with her and she began to tell them about her church. After they had talked for a while, Bruce asked again about praying, and she agreed. A few weeks later, they knocked on her door and she welcomed them warmly. “Her demeanor had changed,” Bruce said. “She prayed with us very openly,” then she brought out a plate of cookies.

One Saturday Jim’s group knocked on a door in a townhome complex and a Muslim woman in her forties, an immigrant from Somalia wearing a long, brightly colored dress and a headscarf came out. She said, “We pray for the country every day.” Joe Frank, who was with the group that morning, asked if she would like to lead the prayer. She prayed, “Allah, bless our country. Allah, bless our neighborhood. Allah, bless our families.” Afterwards, she told them, “My biggest concern being here is living in fear.” Jim and Norma invited her over for a meal, and a month later she and her cousin, who was in her sixties, came to the Cahills’ house for lunch, and they brought the meal. Jim recalls, “We had a wonderful time and were laughing just like neighbors, like old friends.” One of the women said, “This is the first time in 10 years that I feel like I can belong here.”

Bernadette Fossen, who lives in Burnsville with her husband Chuck, met a Vietnamese man who had recently moved to the neighborhood. “I have friends who are Vietnamese,” she said. “That was helpful as an icebreaker, because I understand some of their culture, and a teeny bit of the language. We made a connection, and I’ve stopped over there three times and invited him to different events. To me, it’s the beginning of a friendship.”

Jim sees the door-knocking as a natural extension of the other outreach efforts they’ve been making in their neighborhood for the last few years. The Cahills have hosted root beer float parties on their lawn and wrap-around porch several times a summer, announced by a chalkboard easel at the end of their driveway a few days beforehand. The last two years, they’ve also hosted a three-day camp for kids at their home with help from Action students. When knocking on doors, Jim says, many of the neighbors recognize them from the parties.

The group plans to continue door-knocking into the spring. Bruce explains it this way: “God shows up. Sometimes it seems like he’s in the circle, in the conversation, because people respond to us in a way that seems like they’re more responding to him than to us. He’s touching their hearts.”