New Life in an Old Convent 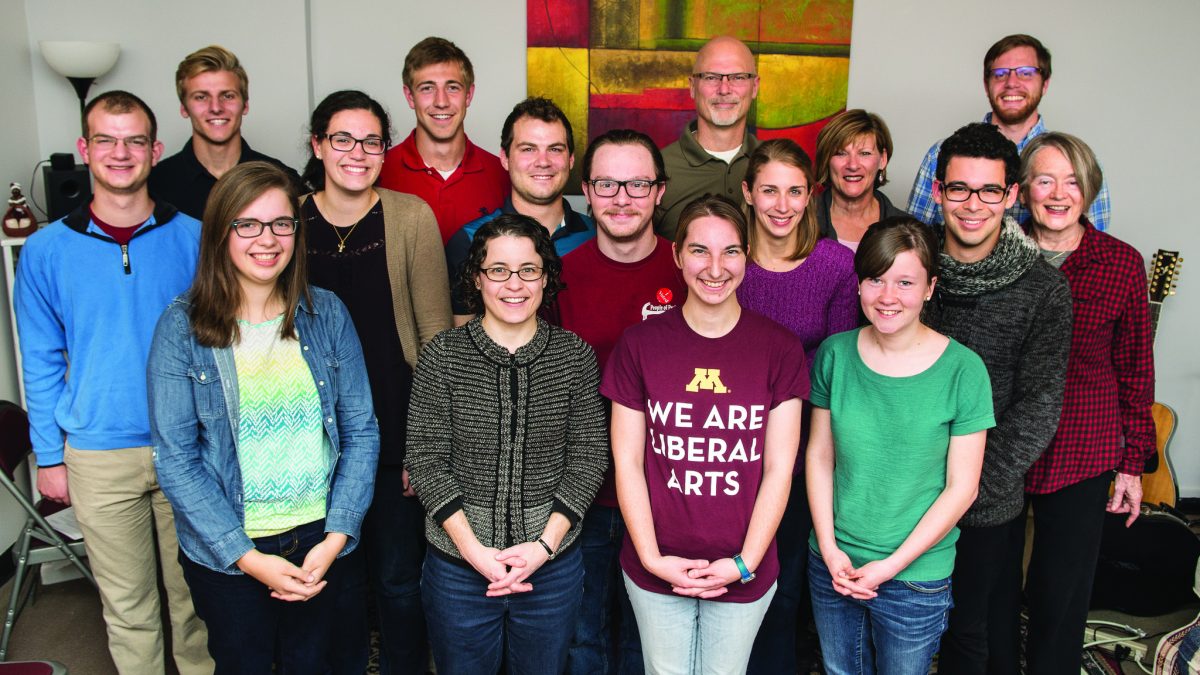 Sixteen Servant Branch members have taken up residence on the second and third floors of an old convent in the West Side neighborhood of St. Paul, an ethnically and economically diverse area of the city where the branch also has an outreach. The group living in the convent includes two campus households (one for men, the other for women), one family (Bob and Christine Brickweg and their son John) and a single woman, Kati Ritchie. The convent is located on the grounds of St. Matthew Parish and had been vacant for several years, since its previous tenants, the Sisters of Notre Dame, had moved out.

Their motivations for making the move vary.
For the campus households, which had been living in Minneapolis near the University of Minnesota, the new location in St. Paul offered several practical advantages. The West Side is more central to all the colleges and universities the students are attending—not only the University of Minnesota, but also the University of St. Thomas, Inver Hills Community College, St. Paul College and Metropolitan State University. The new location cuts down on the commute time for some. The students also wanted to live in a neighborhood where other community members are living, and five other community households live within walking distance of the convent. Lastly, they were intrigued by the branch’s outreach on the West Side, and some of them hoped that their presence in the neighborhood would allow them to participate in outreach activities in the future.
Bob and Christine simply felt what Bob called “a stirring in our hearts” to move to the West Side, and they’re keeping an open mind about what the Lord has for them in their new location. John, 18, had dreamed of spending his senior year living with the men’s campus household, so when his parents proposed the idea of living across the hall from them, he was thrilled. Kati says she has had a heart for the West Side neighborhood for more than 30 years, especially for its many Spanish-speaking residents. 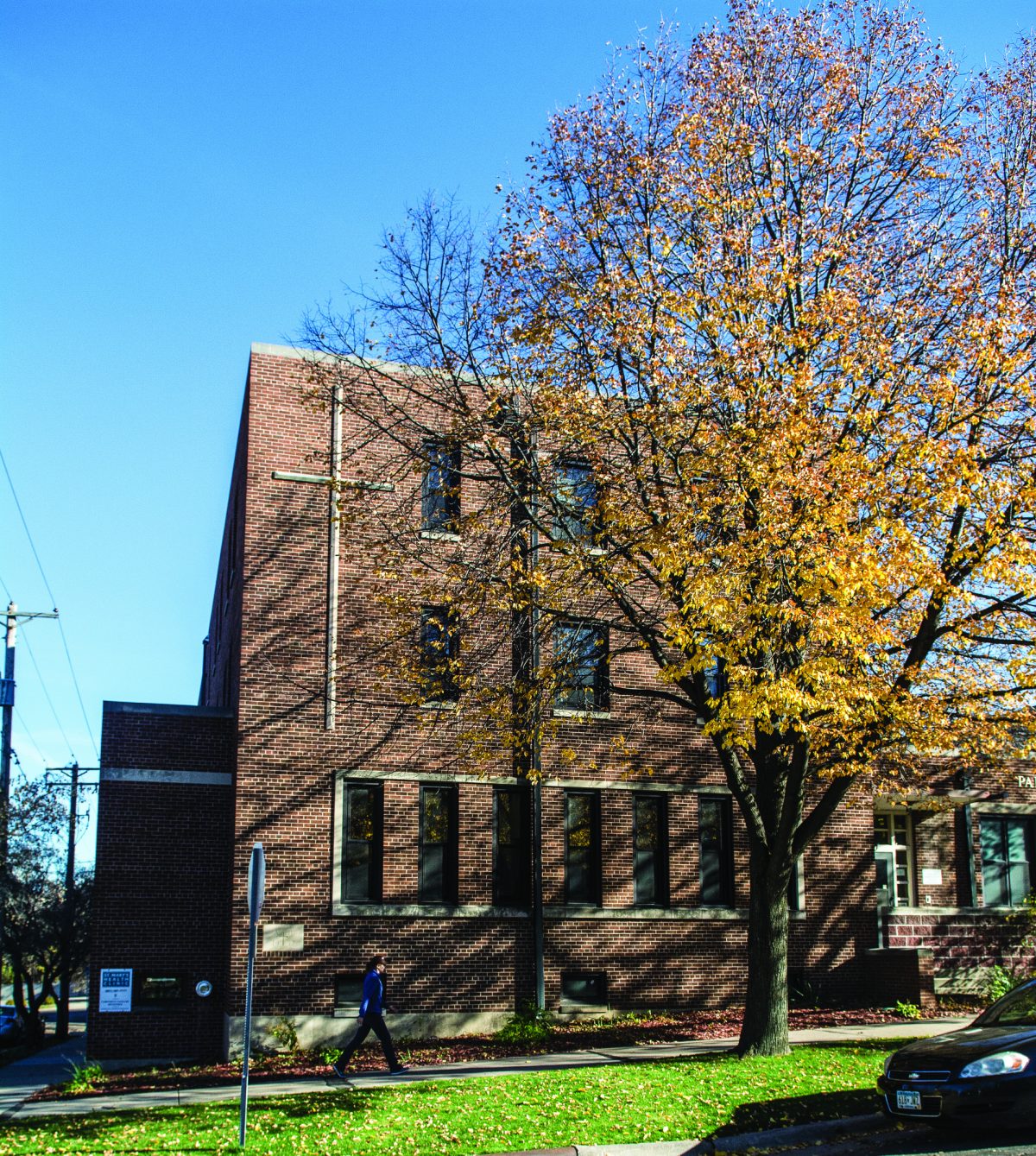 490 Hall Avenue
Pat Murphy, who first found out about the convent and leads the branch’s outreach on the West Side, sees living in the convent this year as the first step in a longer-term vision. “We’ve been talking for many years as a branch about how to care for our elderly members, and we also have a growing outreach on the West Side. We think that this convent could be a place where elderly branch members could live in the future and be part of the outreach. This year, we want to test out the space by having some brothers and sisters live there and seeing how well it works for community life.”
Each floor has one five-bedroom apartment and one three-bedroom apartment. The Brickwegs have the smaller apartment on the second floor, across from the single men’s household, and Kati and the single women’s household take up the third floor. Though the households have made no formal agreements, the close quarters provide many natural occasions for sharing their lives.
For the women, the bathroom is a major point of interaction. Each floor of the convent has a single bathroom—a huge room with three entrances, two shower stalls, four bathtubs, four stalls for toilets, two sinks and a laundry area. Christine walks upstairs to use the bathroom on the third floor, sharing it with Kati and the campus women. “I love the exercise and I love the fact that I see the other women throughout the day,” she said. “We’re always interacting and passing one another.”
The Brickwegs and the single men leave the front doors to their apartments open most of the time. “If they’re open, it’s like an invitation: ‘y’all feel free to come in, hang out, just talk,’” explained Isaac Willard, the head of the men’s household. “We’ll hear one another praying or singing, or someone just breaks out the guitar and starts singing, and people show up.”
John, a senior at Trinity School at River Ridge, says he can hear when the college men are having their evening prayer and can pop across the hall to join them. 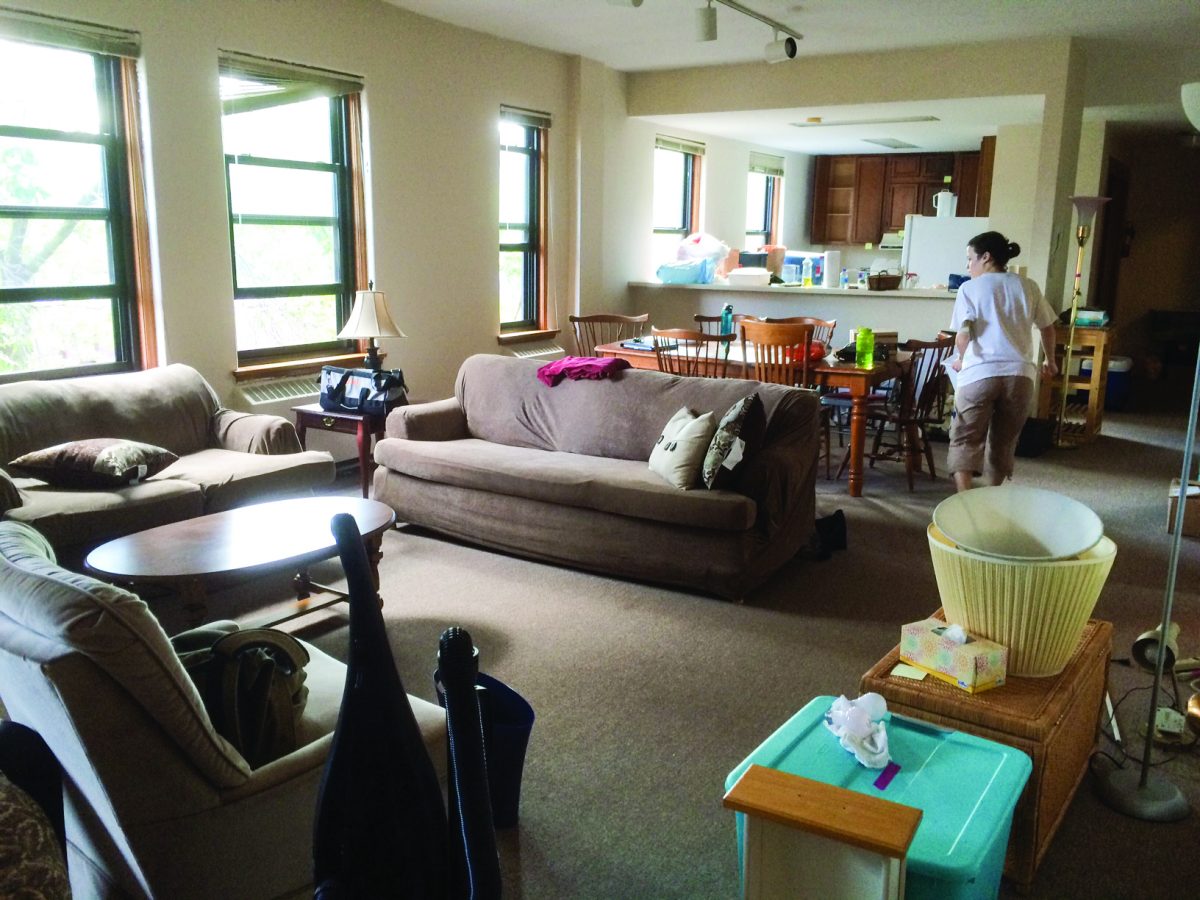 The common area of the women's apartment on move-in day.
The men’s household helped Kati move in upstairs. “When I had a whole bunch of moving boxes that had to go, the guys took them out for me. And when one of my chairs fell apart, they came and fixed that, too.”
Celina Tragesser, one of the college students, spotted Kati outside the building collecting leaves for an art project, so she got to talk with her about her art. Celina says that living with other community members helps her keep a good perspective on her schoolwork—one bad exam isn’t the end of the world. “There’s a lot more life to live, a much bigger picture” beyond the stresses of college.
Many in the group are forging new connections: with their West Side neighbors, with longtime parishioners at St. Matthew’s and the parish staff, with local business owners, etc.
Pat adds that all of this fits in with the ultimate goal of the West Side outreach: “We want our life to shine out into the neighborhood and be a witness to all who are there.”