Scenes from a Neighborhood School 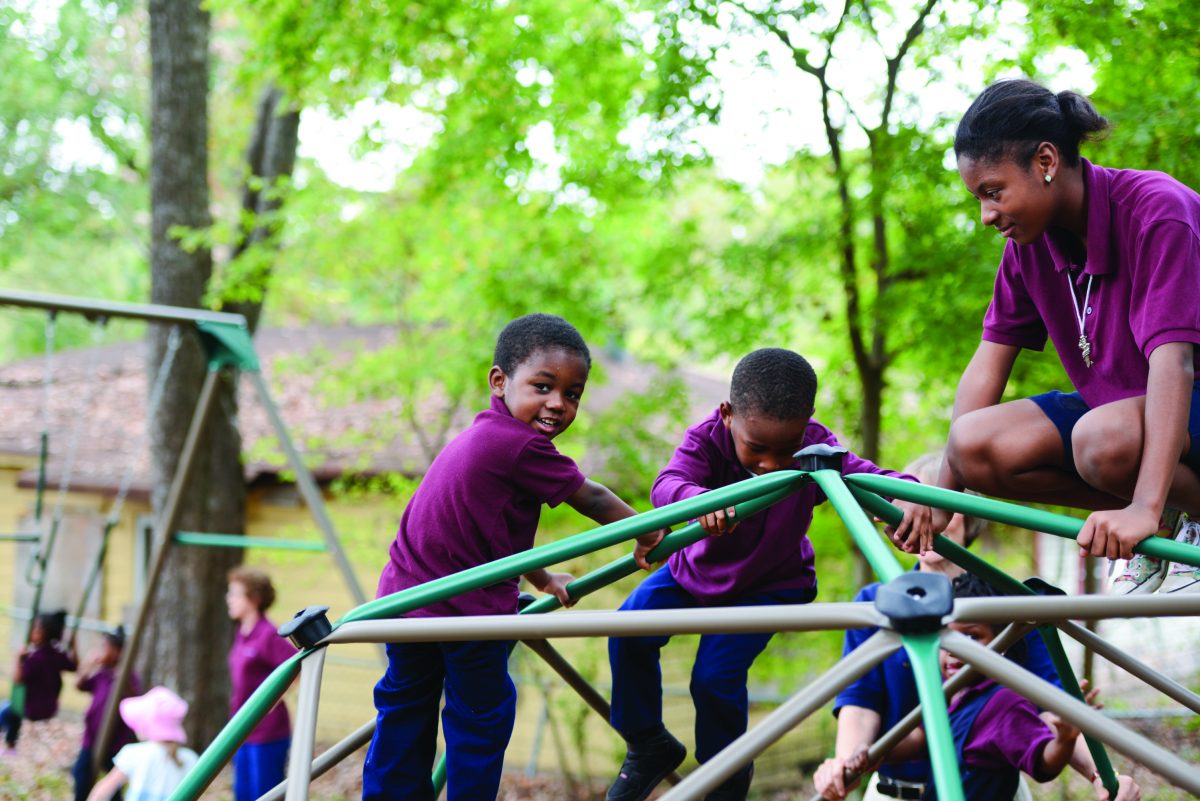 Ayden, Jayden and Latisha made good use of the new playground built for the students this summer.

A few days before Thanksgiving, the relatives of Praise Academy’s 13 students—mothers, aunts, grandmothers, a great-grandmother, one father and many little brothers and sisters—came to the school for a holiday lunch. They carried in platters of mustard greens, green beans, rolls, potatoes, sweet potatoes, cranberry sauce and stuffing. Once inside, they wrote on cut-out paper leaves what they were thankful for—for Praise Academy, for friendships and family members—then attached them with yarn to the Thankful Tree, a branch set in a vase. They toured the school, admiring the students’ work: tissue paper versions of Monet’s water lilies, a model of the solar system made from Styrofoam balls, quizzes about the planets, and handwriting samples. The students performed a hymn for their relatives, singing, “Here, in the love of Christ, I stand.” Joan Pingel, the principal, led a prayer and announced that the students would serve the meal, and saw how the mothers raised their eyebrows and smiled in a surprised and impressed way. After the meal the students served four pies that they had made (apple, chocolate, lemon and pumpkin). The relatives filed out of the school and the students began clearing away the plates and sweeping the floors.

This was a normal, healthy and happy scene, one that any community member would feel at home in, but I can’t help but see it through the lens of our first years in the neighborhood, back when a few long-haired white kids started going door to door to talk about God’s dreams for Allendale and Lakeside, when we were easily mistaken for burial insurance salesmen or narcs, back when just this sort of scene would have been impossible. Death and decay dominated the area, symbolized by the rotten and collapsing shacks, the pop-pop-pop of gunshots at night, the gang murders making headlines. Yet, even then, the seeds of this scene were buried in our neighbors’ hearts. In those early conversations, neighbors told us again and again that their biggest concern was for the children, that they wanted to protect them from the drugs and violence, to get kids off the street and to secure their futures. Today, Praise Academy has become a beating heart for a younger neighborhood, while the rest of the neighbors are the muscles, tendons, hard bones and leathery skin forming around the heart to shelter and nurture it, to celebrate its growth and ensure that it keeps beating. Each morning and afternoon that forming happens, as many of those same relatives arrive to drop off or pick up their children, some in cars, others on foot. Sometimes the moms linger a while, talking with one another. After school, one of the grandmothers walks three of the children, not her own descendants, back to her house, wishing to help a neighbor family with two working parents. 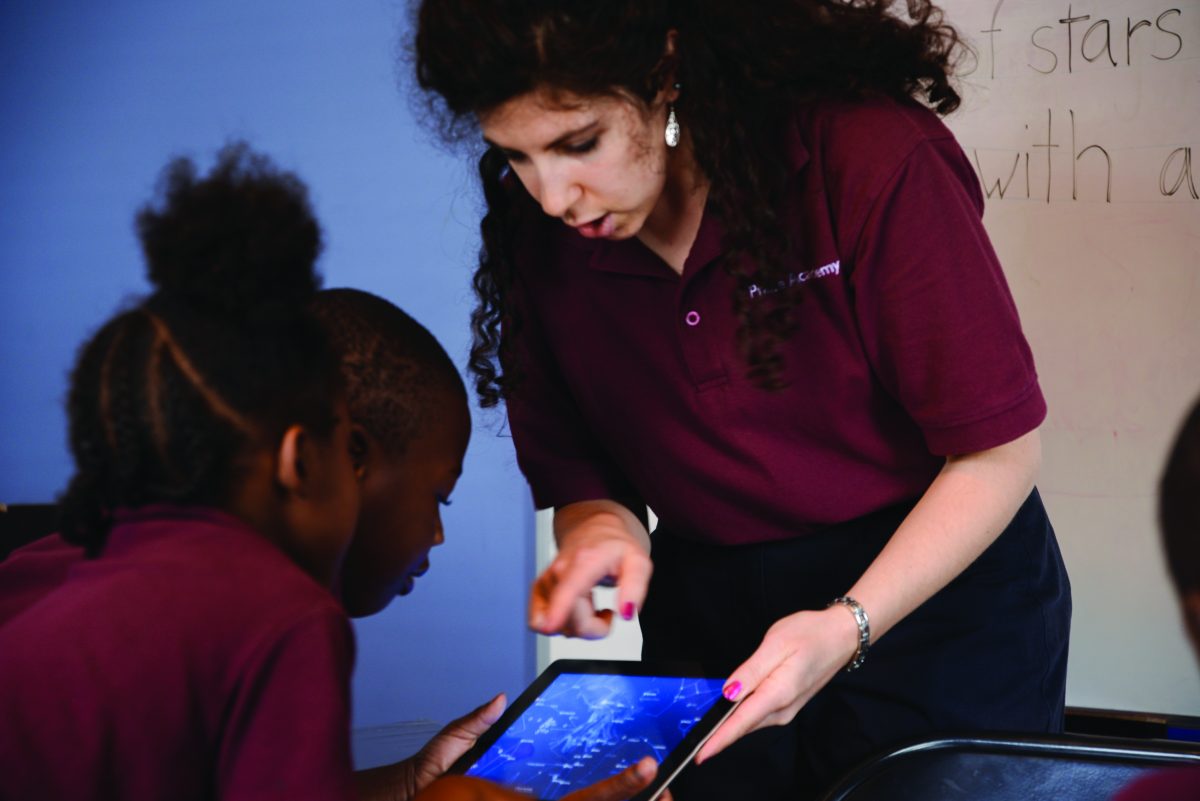 Gianna Priolo helped two second graders understand constellations.
Word is getting out. Edna Malone, the school secretary, recently got a visit from a mom with two fifth graders. She explained that she had been telling a neighbor how disappointed she was with the school her children were attending. The neighbor, who has three children in Praise Academy, told her about the school, and so the mom wanted to talk with Edna about enrolling her own children.
On a recent afternoon, Nano Farabaugh (South Bend) observed a comical, Norman Rockwellian scene. A dog pulled a boy on a skateboard down Yale Avenue, while his little brother, a kindergartner at Praise Academy, chased boy, dog and skateboard. Jayden, the younger one, stopped to greet “Miss Nano,” and on down the street the boys and their dog rolled and ran. These streets are now a safer and freer place for boys and dogs to roam. “Before you came here, there was a lot of chaos, a lot of shooting,” our neighbor Angie Scroggins (see Cooking Up Smiles), told us; “but since you’ve been here, you don’t hear gunshots no more.”
Another scene: A young, single mother of a Praise Academy student sits on the front porch swing next to Patti Deakin. Patti is a school volunteer whose roles include driving kids to school and church, cleaning the school on Friday nights and, perhaps most importantly, speaking from her own experience, for she too was once a single mom. The younger mom shares about her finances, how she finally has money coming in from a job as a substitute teacher. Patti explains that core concept of budgeting, the difference between wants and needs, and how to set money aside now for Christmas coming soon. Patti has already talked to her about bedtime routines, and reading the Bible in the home. “She is teachable and wants to learn,” Patti says. “She’s got some lofty goals and she’s come a long way in the last two years.” The young mother herself chooses one word to describe the neighborhood she grew up in, “peaceful.” She adds, “I would say that it’s peaceful because of the people. They’re all about God. They try to lift you up and encourage you.” She shares the desire of her heart. “I have always wanted my daughter to go to a private school,” and now her dream is real.
But do not let me mislead or conceal, for hardship lurks a few blocks away. Joan recently got a call from another of the moms, who was at the hospital after delivering her newest child. She was worried that her other children, at home with their uncles, would have no food, since their fridge had given out. After school, Joan went to the store to get some chicken and potatoes and took them over. The house was dark and, once inside, Joan saw the bedroom with linens spread out on the floor, where many of the children sleep, the older ones waking up to care for the younger ones. Joan asked the kids where they eat. On the floor in the living room, they told her. She prepared the plates and cut the chicken for the younger ones, telling the uncles that the children would eat first, and staying until the children had finished the food. One of the uncles must have been impressed by Joan’s stick-to-itiveness, because he later recounted this scene to the mom. She then related in glowing terms what Joan had done, telling David Zimmel, “I love Miss Joan.” She desires a new house for her family, one closer to the school, and David, who knows the rental market well, is helping her to find one.

Happy kindergartner D’Andre.
During the school day, the same children who woke up on that floor are hearing for the first time that the earth goes around the sun, or answering 46 math questions right without making a mistake. (After correct answer number 46, the boy’s tutor, Pat Malone, a usually mild-mannered fellow, reports, “I ran over to the school and got Joan to tell her. We were both so happy we practically danced through the school!”) They are learning that blue crayon with yellow crayon on top makes green, and watching videos about the birth of stars. They know what a glockenspiel is, and that it sounds like Tinker Bell.
Joan recalls how, as a ninth grade student at Trinity School in the 1980s, her teacher, Jeannette DeCelles-Zwerneman, had a hard time getting her to memorize the poem “The Owl and the Pussycat.” Now Joan’s first and second graders are learning it, perfecting their penmanship by copying out the stanzas, and then reciting them together. “Sometimes I have to look at the paper,” Joan admits, “but they remember it just from writing the lines out,” and have three stanzas down pat.
The children don’t want to miss any of this fun, as was borne out on a recent morning. One of the boys, alarmed that his grandmother had overslept, started calling and texting his aunt, trying to rouse her so she could bring him to school. A mother also reports that her son, who is still learning his days of the week, gets upset when he wakes up and learns that it’s Saturday or Sunday. Last year, when he went to a different school, he would kick and scream on weekdays and celebrate the weekends.
Final scene: Each day for recess, the students go out to the playground, new this year, fenced in and built on rolling ground that used to hold a rotting house that looked like a barn. They swing on the swings and climb up the climbing dome. The older ones enjoy running wild, their yelps and squeals carrying down the street. These are some of Joan’s favorite moments. “It moves me a lot to watch them on the playground. In some ways I feel like we are giving them back their childhoods. Sometimes I worry, wondering, are we teaching them enough? Then I think, we’re showing them that there is a Lord who loves them and people out there who love them just because. It’s not abnormal that a student will say to me when I pop my head in the room, ‘I love you, Miss Jones.’ They can be children here. We can laugh with them, and we do. Sometimes they tease me by deliberately trying to form a letter wrong to see how I’ll react!”
It’s a lot to be thankful for.