More than 300 children attended camps sponsored by the community’s Action and Mission divisions this summer. The camps took place in three locations: Shreveport’s Allendale neighborhood, the South Side of Indianapolis, and for the first time, in Evansville, Indiana.

“I am so grateful for the generosity of so many high school and college students from around the community, as well as the adults who volunteered,” said Mike Zusi, the community’s Action program coordinator. “As one student said to me, every place you look in these neighborhoods you can see Christ working. We are so blessed to be able to be part of that work.” 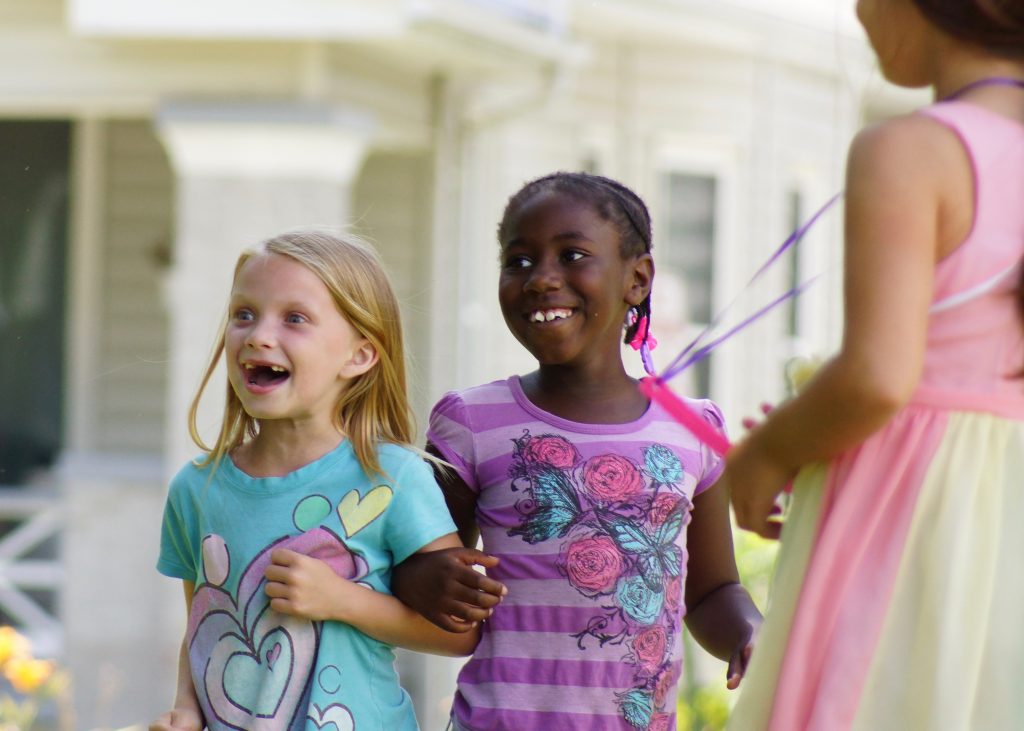 The Evansville camp was a three-week affair that the staff hoped would draw 20 or 30 children from the area. But on the first day, 38 children arrived, and by the end of the three weeks a total of 106 children had attended the camp.

Jo witnessed several locals finding ways to help the camp. “Bus drivers would take extra care when they saw our children crossing the streets, and one day a neighbor donated money to buy popsicles for the children because it was so hot.”

Gabe Yohe, who led a group of six-to-eight-year-old boys, recalled a favorite moment. “A boy was telling me how his sister never said she was sorry for the things she said that hurt him. I told him he could forgive her anyway. For the rest of the camp, we would hear him shouting at random times, ‘I forgive you!’”

Evan Lent, who had overall responsibility for the Action summer in Evansville, said that weekly neighborhood ice cream parties the team hosted played a key role in drawing kids and allowing the team to meet their parents. 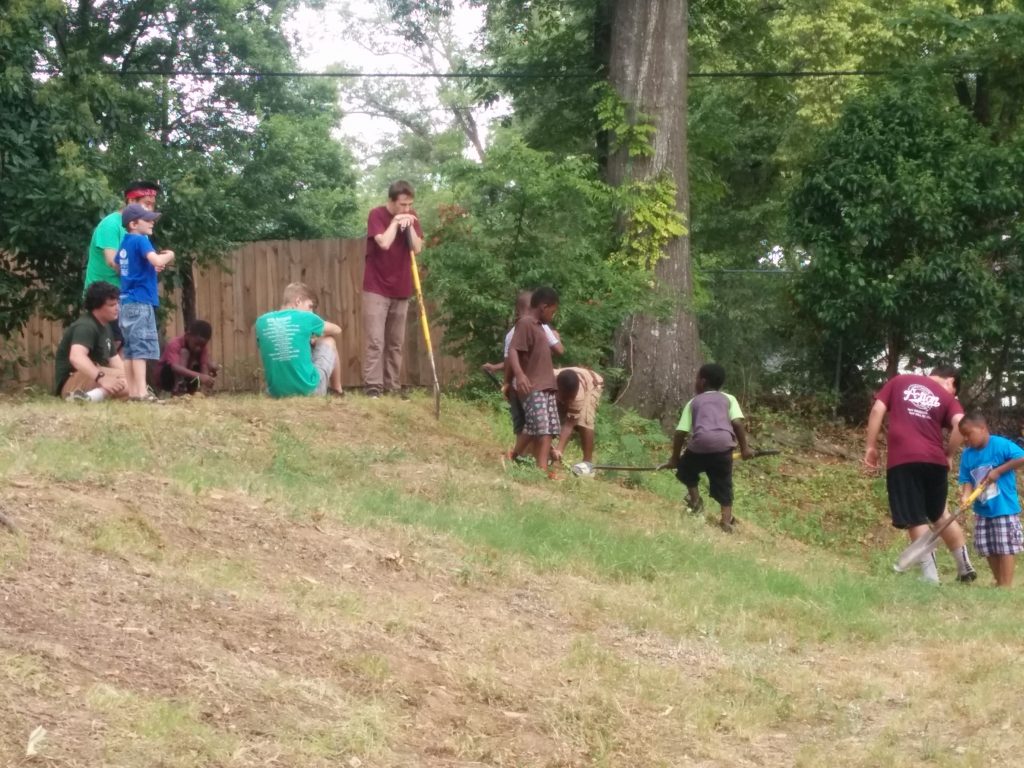 The camp in Allendale, now in its 14th year, drew 111 children from the neighborhood, with 60 children coming on the camp’s busiest day.

The Action team that ran the camp included Raquel Bradley, a 17-year-old who grew up in the neighborhood and has been coming to camp for seven years. Another neighbor, a recent high school graduate named James Porter, had attended the camp as a child. He returned as a volunteer, serving with one of the boys’ groups. Abcee Smith, the mother of a Praise Academy student who also attended the camp, volunteered in the kitchen, cooking for the Action team.

Journee Elie, a graduate of Trinity School at Greenlawn who went to New Orleans for college and joined the branch there, came to Allendale to work with six-to-eight-year-old girls. She said that several sisters had urged her to work in Allendale, telling her that, as an African-American college student, she could be a particularly effective role model for neighborhood girls. “God has me here and I love it,” she said.

John Crimmins, a counselor from northern Virginia, recalled how during a Bible study, one of the older boys suggested that the group go to pray with and talk to their neighbors. John waited a few days to make sure the boys were serious about going. Then, on the last day of camp, they went out in two groups to knock on doors. “Everybody in my group led at least one conversation, even those who had initially been hesitant. My team prayed with six people,” John said. 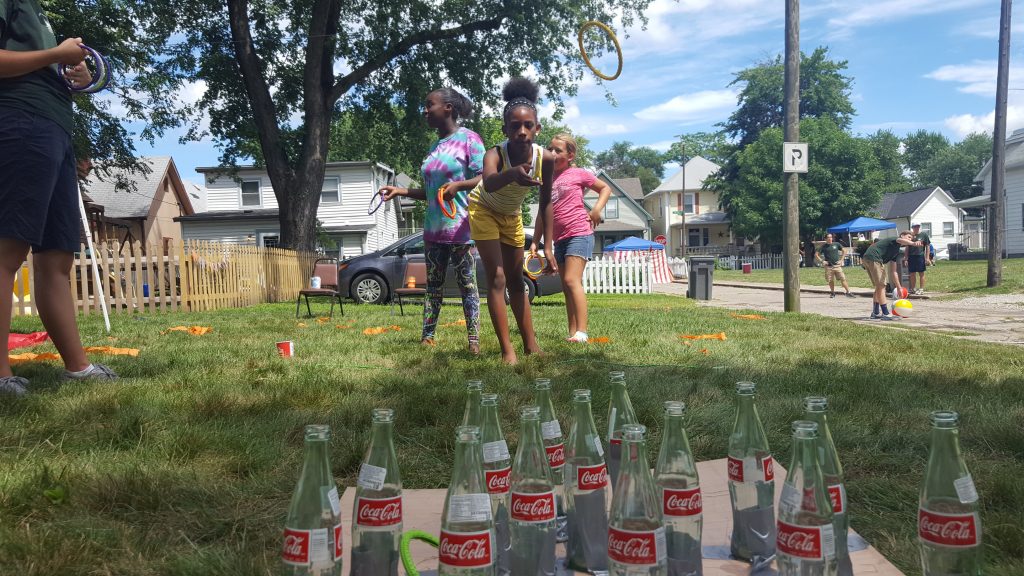 The five-week-long summer camp in Indianapolis drew 101 children. The boys enjoyed running timed races down Karcher Street, as well as playing capture the flag, kickball, basketball and football. The girls wove placemats, decorated journals and took a field trip to an art museum.

Joe Walker, a staff member from northern Virginia, said his favorite moment involved a six-year-old boy. “One day after camp he proudly showed me the airplane he had made out of Popsicle sticks and clothespins. He was overjoyed.”

Tim Pingel, who led the camp with Ellen Putzier, said that the counselors spent some time each day sharing Bible stories with the campers. “I hope that if the kids only remember one thing from camp, it will be these stories,” he said.

High school student Genevieve Kane, who worked with the youngest girls’ group, recalls seeing a six-year-old girl whom she had met at camp the previous year. The girl told Genevieve that she remembered learning last year that Jesus loved her. “After that conversation I thought to myself that all we did last summer, every game, every conversation, every hard day, was worth it because that girl remembered that Jesus loves her.” 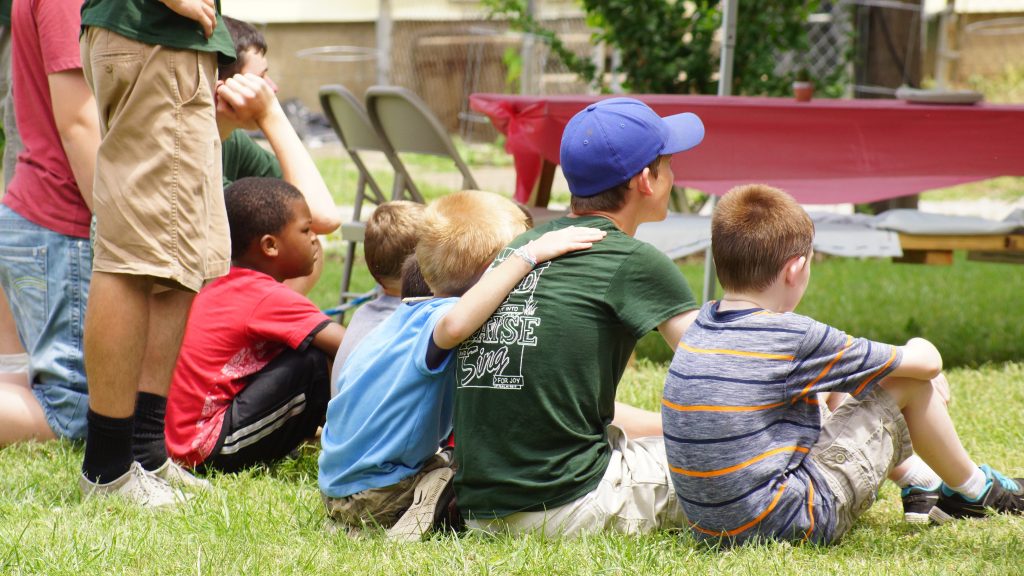