Praise Academy: A Look Back at Year One 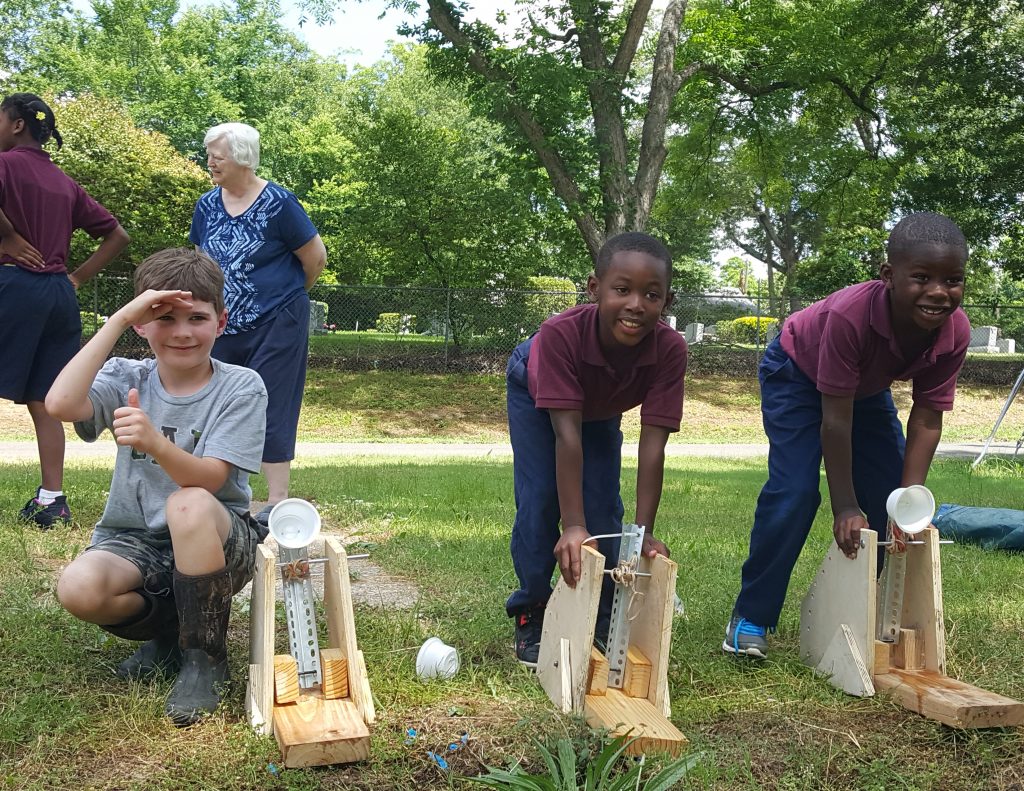 Neighbor Paul (left) joined Tylar and Jaylen in demonstrating the catapults they made in shop class this spring under the direction of Joe Bulger.

School let out at Praise Academy in Shreveport on May 20. Students, teachers and Mission team members celebrated the completion of their first year with hymns and brownies (prepared by the pre-K class) before capping off the day with a water balloon launch. For Joan Pingel, the principal, a favorite moment came when several students ran to get their final projects—ABC booklets featuring letters, words and pictures—so they could show them off. The students expressed sadness at the close of the year, and one told Joan he planned to wear his uniform every day during the summer.

During the final month of the school year, the students took a field trip to the zoo in Tyler, Texas. Seven of the eight students had never been outside the city limits before, and none had ever seen a zoo. Once there, Joan divided them into groups and sent them off with worksheets so they could check off animals as they saw them. After spotting a red fox or a lion or a giraffe, the children returned to “Miss Jones” squealing with delight. Joan wanted the students to get to see the white tiger’s graceful walk but, each time they went by, the tiger was asleep. Thirty minutes before they had to leave, they went by one last time, and they prayed that the tiger would get up and move. The tiger “lifted his head, looked right at us and walked down into another part of his cage,” Joan said. 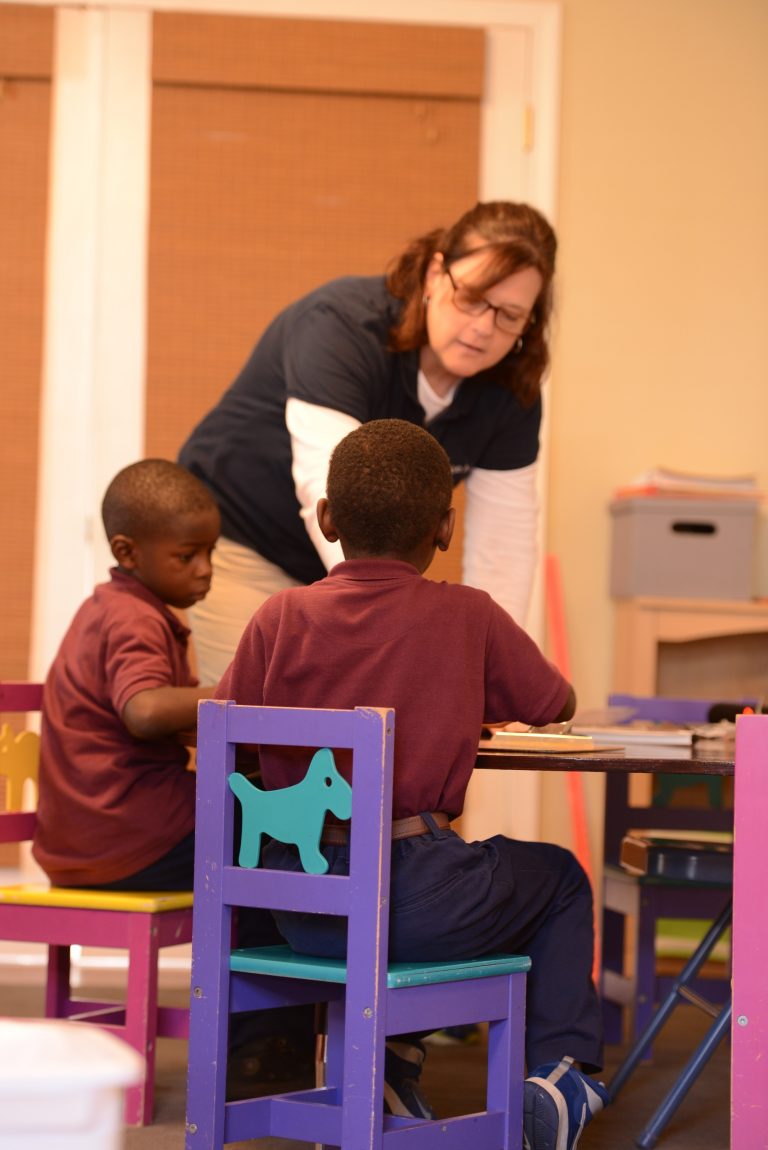 Kevin McShane, one of the teachers, recalled the first few weeks of school, when one of the youngest students would always cry or scream after being dropped off in the morning, missing his mother. Others struggled to learn the daily routine, a rhythmic succession of short lessons punctuated by free play, exercise, lunch and recess. “One student was resisting learning until Nano Farabaugh and Joan came up with a format called train station. It allowed students to move around the classroom, choosing games and other educational activities at various stations.” At first, one of the boys could only put together five pieces of a 25-piece puzzle during a 20-minute segment of train station. A few months later he could complete a 48-piece puzzle.

Libby Grondin, a Suzuki violin teacher and occasional violinist with the Shreveport symphony, volunteered to teach twice-weekly music lessons. She taught students the basics on a variety of instruments: tambourines, triangles, drums, maracas, violins and xylophones, and introduced classical pieces by showing performances on YouTube. “They really liked Rhapsody in Blue by George Gershwin,” she said. Libby also took two fifth grade girls to a symphony performance for schoolchildren. “Their favorite part? Every time the orchestra played! They wanted it to go on forever,” and even got annoyed when nearby students made noise during the performance. 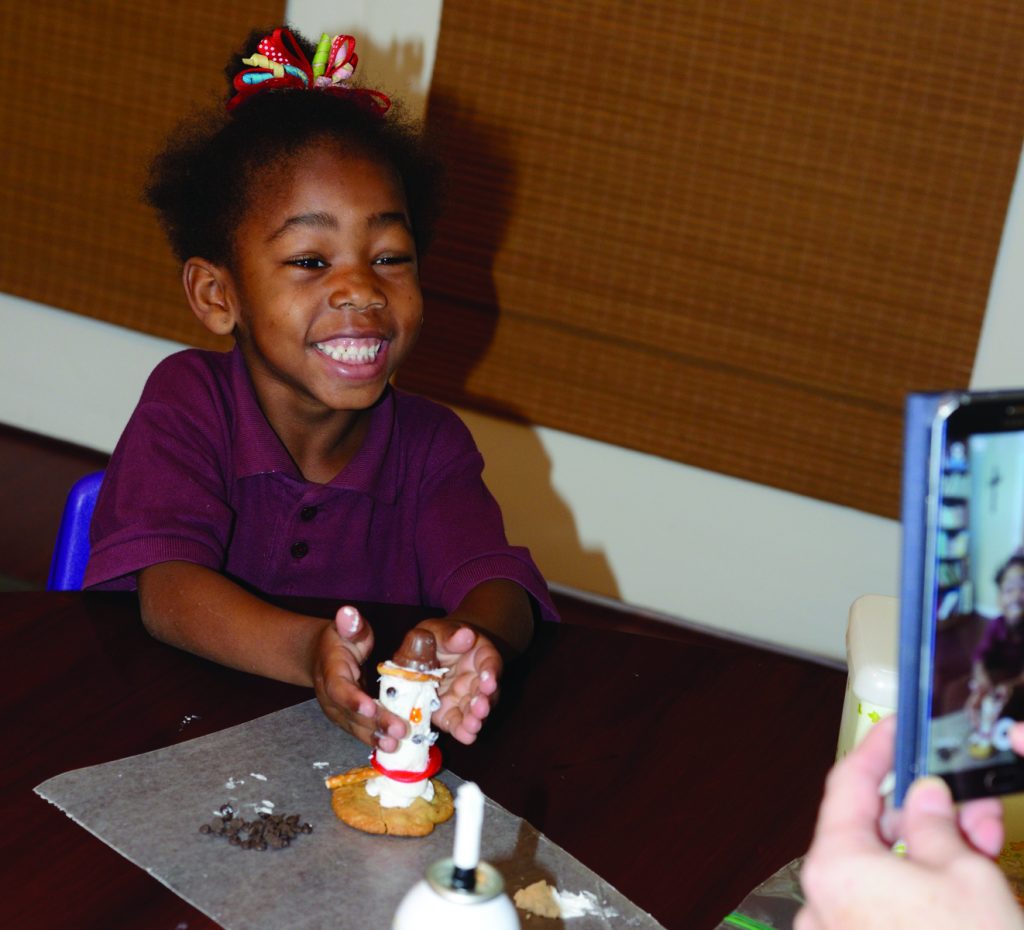 Pat Malone, a former Greenlawn math teacher who lives next door to the school, came over each day to take care of the youngest children during naptime. By the end of the year, the students were saying, “I love you, Mr. Pat,” when he left for the day. Also, if a student was misbehaving, Pat would sit with that student on the school’s front porch. “I used to go over every two or three days to sit with a student, but by the end of the year it was once a week at most.” During these times, Pat often had the students work on their counting, and he saw a student who couldn’t count to 10 last September confidently count to 30. “He was very proud of it.”

Colleen Bowar, another teacher, noted that the students’ ability to play improved as the year progressed. At the beginning, during their half-hour of free play, they would often fight, and their play lacked imagination. “One day late in the year, they created a new game, loosely based on Power Rangers, where they would fight the bad guys, then race off to save somebody, then come back and fight more bad guys. They kept the game going for several days.”

Joe Bulger ran a shop class for the boys two times each week. They made coat racks for the school and a stand for a bike that they can now pedal on the back porch. The shop class also designed, built and raced Pinewood Derby cars. “The boys were proud of their cars, and it was fun for them to create their own unique designs.”

Jeanette Duddy, who volunteered at the school each morning, appreciated small moments of success: “The kids did one project that involved picking up beans with tweezers. It was a difficult task, and they grew frustrated and were tempted to cheat. But they persisted and were finally able to do it after a few days of effort. They learned to keep at it.” 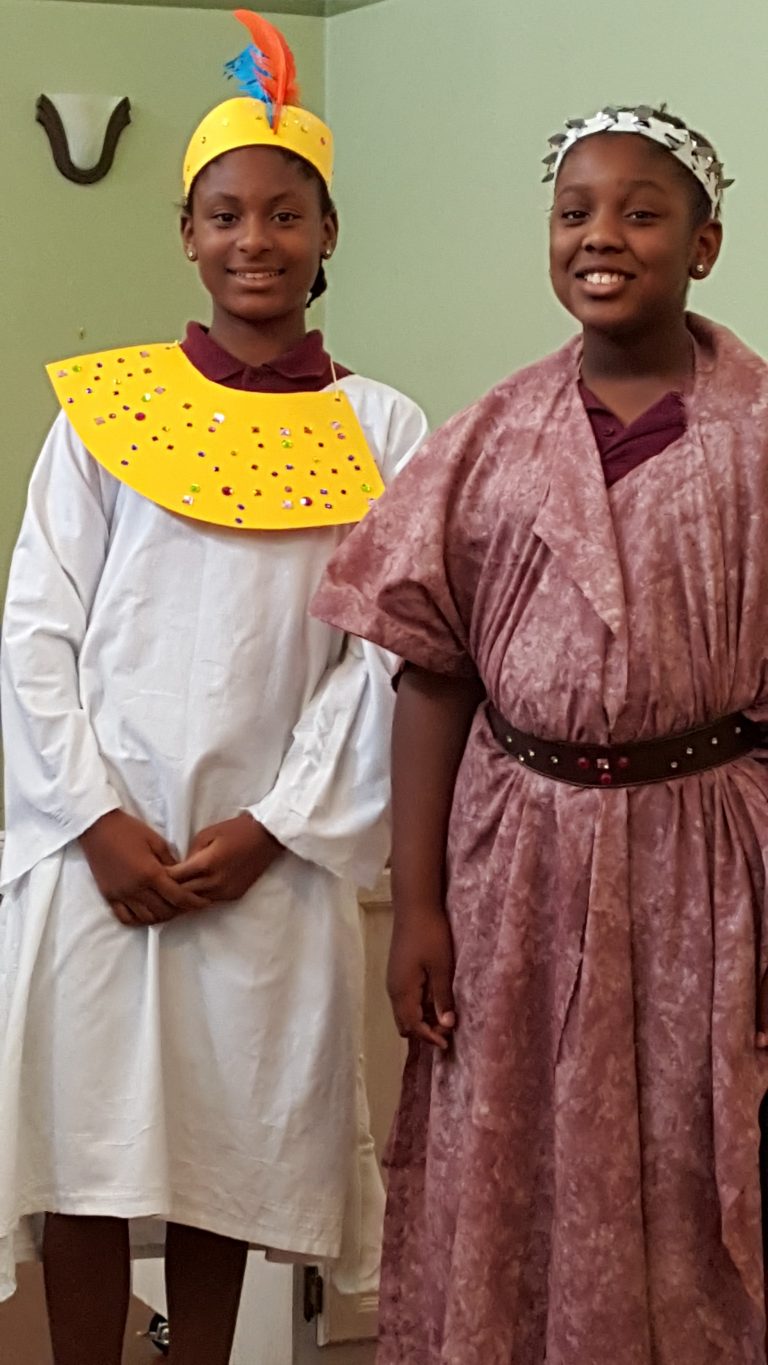 Latisha (left) and Shakiya dressed up and prepared food appropriate for the Egyptian and Mesopotamian civilizations they studied in history class this year.

Joan noted that the many gifts the school received from all over the community gave her a chance to teach geography. A youth group from Oahu sent books they bought with money raised from a garage sale. Youth groups in northern Virginia and Colorado Springs sent notebooks, paper, pencils, letters and more books. Servant Branch members hosted a shower for the school and others sent money around Christmastime that Joan used to buy a Nativity set. She also received text messages from all over the community, offering prayers, encouragement and words from the Lord. “When you’re in the trenches, sometimes you can feel like it’s just you there, on your own, but I didn’t feel that way. We had our needs met pretty quickly by the body of Christ.”

Nano Farabaugh, the president of Praise Academy, made four visits to the school and spoke about the spirit of this year’s efforts. “Paul DeCelles told us from the beginning that we should not be trying to teach in a programmatic way like many schools do. Our goal is to teach to the children, tailoring everything to their specific needs. That’s why we have a high ratio of teachers to students, which we intend to maintain as the school grows. We’re dealing with an extreme situation in the neighborhood and we are very glad to be able to help our neighbors meet their needs for education.”

“In the next few months, Praise Academy expects to receive recognition of its status as a nonprofit corporation in the state of Louisiana,” added Paul DeCelles, the chairman of the school’s board.