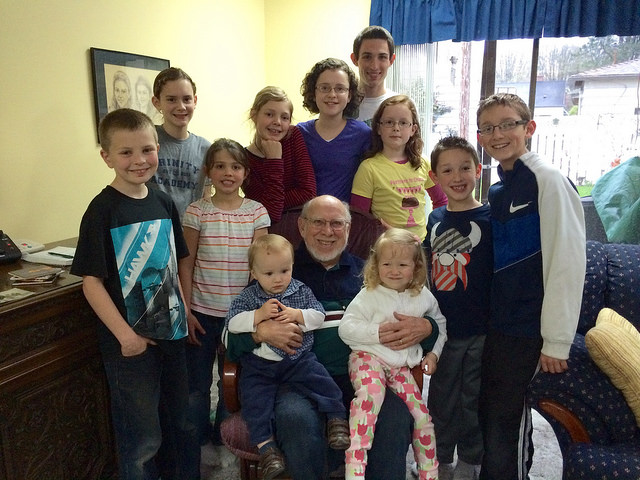 Dick Safranski surrounded by a few of his friends in the neighborhood.

Dick Safranski, an 82-year-old widower from Portland, can't stop talking about the birthday gift his People of Praise neighbors gave him on January 26.

That evening members of the Clark, Kabele and Ridenour families crowded into his home and prayed with him to be baptized in the Holy Spirit. "Getting prayed over was spectacular," he says.

The story began at the regular Monday night dinner that the Clark, Kabele, Brady and Ridenour families hold. They were talking about people they knew who might be open to being baptized in the Holy Spirit. (At their community meeting the day before, they had heard a talk from the "Spread the Fire" series, developed by Kevin Ranaghan and Louis Grams about praying with people for the baptism of the Holy Spirit.) Someone brought up Dick Safranski.

Dick has lived in the same neighborhood-where several community families also live-for 19 years. He loved to walk around the block once or twice daily with Gloria, his wife of 61 years. "They knew everybody," Pat Clark says. As Gloria battled cancer during the last six years of her life, community families prayed over her many times. She died March 27, 2013.

During the dinner, Pat noted that it was Dick's birthday and suggested the group go over and sing to him. Dan Kabele raised the stakes: "Why don't we give him something that nobody else has given him?"

They all trooped over to his house, but Dick was at his daughter's home for dinner, so they sang into a cell phone, before returning to Kabeles'.

Dick arrived home minutes later to discover a message on his answering machine-muffled voices singing "Happy Birthday." He didn't recognize the number but called back.

When the crowd realized Dick had returned, they rushed back and sang to him again from his front porch.

After they reminisced about Gloria and the blessings of his past year, Dan said, "Dick, we have something to give you for your birthday–would you like to be prayed with to be baptized in the Holy Spirit?"

Dick's eyes welled up with tears and he replied that he had always loved it when they prayed with Gloria, and he wanted prayer as well.

Dick was struck by Beth Kabele's voice over his shoulder, speaking in tongues. "They talked about bringing the Holy Spirit into the house and me," he remembers. "They did, and he did!"

The next morning, Dick told his family and his parish priest about what had happened to him, and since then, as Dan says, "He's been telling everybody he knows."

Beth notes that Dick has always been God's man. "His example of a faith-filled life has impacted those around him in the neighborhood. He is highly respected as a steady, faithful, good, patient and loving man. That's why we were so drawn to him from the first days of meeting him and Gloria."

"I was a 'cradle Catholic,'" says Dick, "growing up in a Polish family with seven children and a love of the church. I've always been active in my parish, but after being prayed with I'm even more cognizant of what's going on there. The word 'spectacular' doesn't cover it. I felt different since being prayed with; God has compensated me for losing my sweetheart. My faith keeps getting deeper."