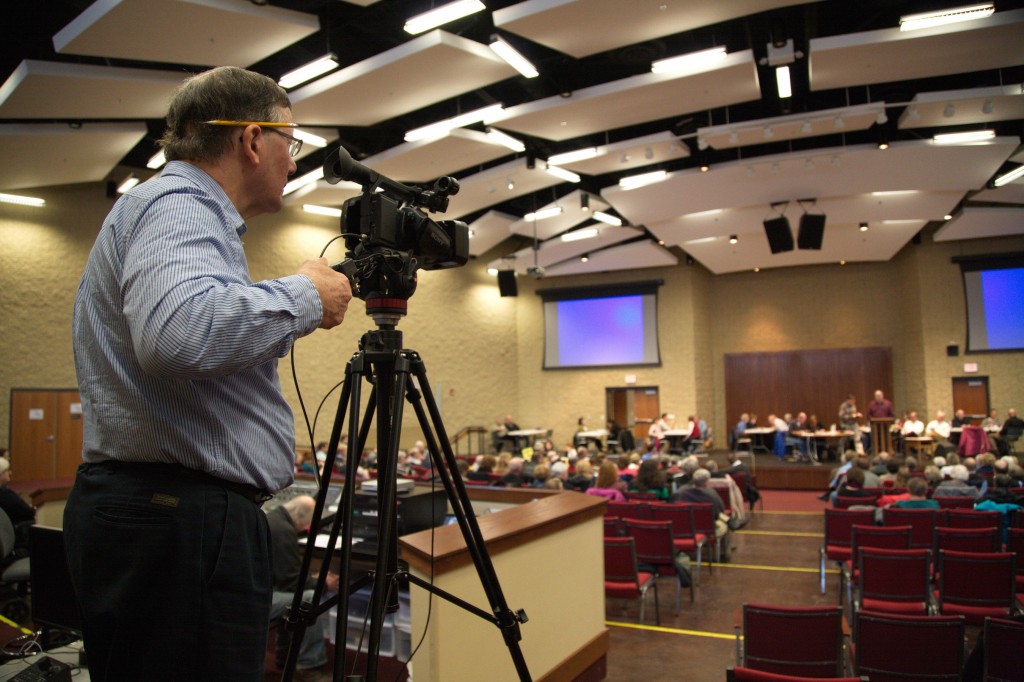 Servant Branch has begun live video broadcasts of their branch meetings that members can watch on the Internet.

The broadcasts, which are only available to Servant branch members, are a new way for brothers and sisters who can’t attend the meeting because of illness, old age, travel, etc., to participate in the life of their branch.

“We wanted to help absent branch members be more united in heart and mind with those in the meeting room,” explains principal branch coordinator Joel Kibler.

The project is just four months old, but reports from branch members indicate that it has already begun to fulfill its purpose.

Pat Walsh is a long time branch member who suffers from post-polio symptoms and hasn’t been able to attend meetings for about 10 years. In the past she listened to the meeting at least a few days later on CD, but now she watches it live and can talk about it afterward with her housemate Penny Arndt. “The broadcasts show my brothers and sisters as they sing and pray, and that helps me feel more a part of what’s going on and join in,” she says.

Shane and Diane Drefcinski live in Platteville, Wisconsin, about 250 miles from the Twin Cities. They’ve been on assignment there for over a decade, so Shane can teach philosophy at the Platteville campus of the University of Wisconsin. “It was often difficult to corral all six of our kids together to listen to an audio recording,” Diane says, “but now on Sunday afternoons I can call out, ‘The community meeting’s on,’ and they’ll gather around to watch and listen.” They look for their friends, relatives and their sister, Angela, in particular. “We feel more connected, and we are grateful to have this option now.”

Nancy Caneff traveled from the Twin Cities to Florida recently to care for her 91-year-old mother. “On a day when my husband, Tom, gave a talk, my mother and I were able to watch as he gave it. It was wonderful to recognize faces and voices; I felt present with the branch. As I sat on the side of Mom’s bed, we sang along with some of the older charismatic songs she remembered.”

The idea for the broadcasts came about six years ago, when a group of branch members began meeting to talk about how to help aging community members. Last year, the branch’s CD duplicator broke, and Joel saw an opportunity. He spoke to the branch coordinators and they agreed to study how many people could benefit from live video broadcasts. After the study, the numbers looked sufficient to justify the expense, so Joel asked Tom Bowar to begin researching equipment. Eventually, on Tom’s recommendation, the branch purchased two video cameras, along with a tripod and a computer to run the system.

Now Tom leads a team of five that includes Ken Larsen, Dan Laust, Elizabeth Pease and John Gruber. A typical community meeting requires a three-person crew, including two camera operators and someone to manage the computer where the feeds are mixed together and processed for Internet viewing. Two cameras on tripods are positioned at the back of the auditorium facing the stage. A third camera, controlled by a remote, will be used starting in December. It will be mounted at the front of the room, where it can pick up shots of branch members.

John, a senior at Trinity River Ridge, says that he enjoys working on the crew. “Every week there’s something different to deal with and learn about. People who are watching will often text Tom directly if there’s a glitch. We’re constantly changing and improving.”

The glitches have been there, Tom admits, but branch members say the broadcasts have been getting better with each meeting. “We’re still learning, and we want the production to be high-quality.”

After the meetings, the video recordings are archived and placed on a private page on the website Vimeo.com, where branch members can access them for about three weeks.

Gary Luzar lives 42 miles from River Ridge and has back problems that have kept him from recent meetings. He says: “It’s cool that the meetings are accessible to people in my situation.”