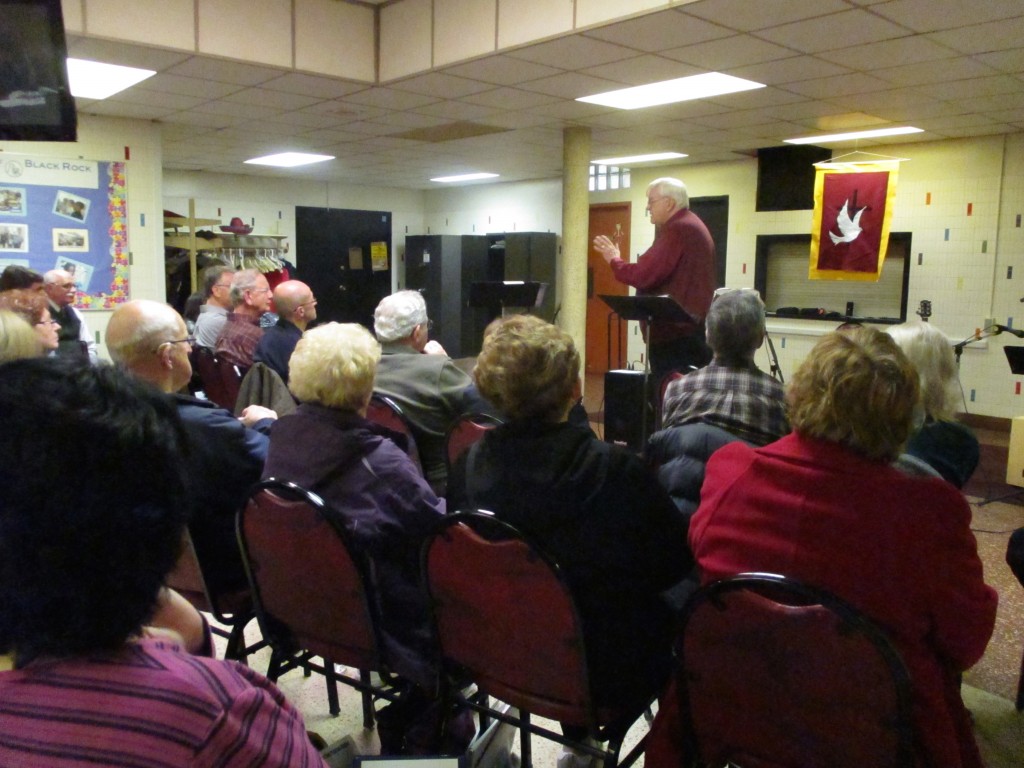 Buffalo branch’s outreach in Black Rock, a lower-income multicultural neighborhood northwest of downtown, is approaching its first anniversary. The outreach now includes weekly Thursday night prayer meetings, with one a month serving as a healing meeting, and, for the last six weeks, a men’s group that two neighborhood men participate in.

“This is our response to the Lord's call to us to find those people with whom he wants to share his Holy Spirit,” says principal branch coordinator Tom Shriver. “We wanted to find a way to expand our surface area and meet more people. We're a smaller, older branch, but I'm always impressed at how our members are wide open to serving God in any way possible.”

Rev. Richard Jedrzejewski, the pastor of Church of the Assumption, a Catholic parish in Black Rock, classifies the area as inner-city. He grew up in the neighborhood and has seen it change from a middle class area for stable Christian families to a multiethnic and multireligious neighborhood with a wide variety of family situations. “It is economically depressed. We have many single-parent households,” he says. “Black Rock has big challenges.”

The prayer meetings began in November, 2013, as branch members considered together what work the Lord might be calling the branch to take on. Tom points to a men’s retreat in 2012 as the catalyst, during which Mission Program coordinator Nick Holovaty told stories of the community’s mission work: “Nick sparked a hunger in us to step outside our comfort zone and do more for the Lord.”

“In January of 2013, Tom gave a challenging talk about how to get serious about answering the Lord’s call to us to engage in outreach,” recalls Martha Delaney. Afterward, the branch began exploring possible outreaches, talking with a number of Buffalo pastors and church leaders.

“At some point a friend of the branch suggested we talk to the pastor of Church of the Assumption in Black Rock,” recalls Bud Northway, who led the branch discernment effort and now leads the outreach in Black Rock. “As we talked with Father Richard, it became clear to us that he had a heart for all the residents of Black Rock. He spoke frankly about his concerns for their spiritual health. He wanted them to have a personal relationship with the Lord. When I floated the idea that the People of Praise could run a prayer meeting in the area—maybe in his church—he was very enthusiastic and supportive.”

Father Richard offered a room in the church for the prayer meeting, funds to finance advertising, and his full support of the branch’s ecumenical approach.

About 20 members of the branch began taking turns coming to Black Rock every week to hold a prayer meeting. They promoted it primarily by word of mouth and through a stream of stories in the neighborhood newspaper. A children’s choir including many neighborhood children sang for their annual Lessons and Carols program. During the branch men’s retreat this past September, retreat leaders Charlie Fraga and Luke Glover (Portland) went with the men onto the streets, where they all introduced themselves to neighbors and offered to pray with them.

Bill Toth, a 73-year-old widower who has lived in Black Rock his whole life, says that he has been neighbors with Jim Benson for 20 years, but it wasn't until they joined the prayer meeting and then the men's group that they became good friends. Bill says he enjoyed walking the streets with branch members, “bringing the good news of God's love to Black Rock residents, taking back the neighborhood from the Enemy and introducing the People of Praise to all the beauty in Black Rock.”

Last Saturday, branch members came to a soup kitchen run by Church of the Assumption, where they prayed with the guests. The branch hopes to start a women’s group in the area soon. They have started conversations with pastors of other neighborhood churches about more ways to work together.

Father Richard expresses his gratitude for the People of Praise’s presence in the neighborhood. “That they're not afraid to walk the streets on Saturday afternoon is big. Despite all the programs that exist to help people, it’s one-on-one relationships that make a long-term difference, and that's what they’re trying to do. Doing that takes a lot of people and a lot of time to accomplish.”