His Pain Healed, A Neighbor Goes on Mission 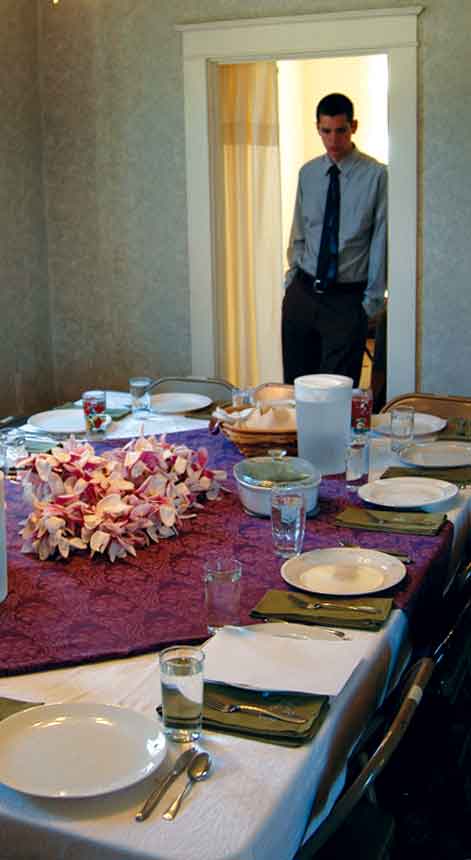 “I’ve got to sit down—I’m in so much pain,” said Tim, a 25-year-old man with a long white cloth wrapped around his rib cage. He had broken two ribs and torn some of the muscles in his right shoulder in a car accident. It hurt to breathe, and he couldn’t stand up straight without pain.

As Tim sat on his front porch, Evansville missionaries Peter Putzier and Mary Timler started a conversation about the importance of hearing the Lord and responding quickly to what the Lord says.

“I can tell that you both have a relationship with God,” Tim said. “No offense, but I wouldn’t have kept talking to you if I hadn’t seen that.” Five days earlier, at church on Easter Sunday, Tim had rededicated his life to the Lord. He claimed he could “talk your ear off about the Lord.”

He also said that his rib cage hurt at an eight on a scale of one to ten, but when Mary and Peter prayed with him, he said the pain dropped to a two.

“Can you take off the binder?,” Peter asked him.

Tim’s eyes widened as he removed the white cloth, expecting a stab of pain at any moment.

“I can’t believe this.” Tim began gingerly probing his ribs through his T-shirt, but he couldn’t cause any pain to flare up. He looked at his friend James, standing nearby.

“You’ve seen me the whole time,” Tim said. “I couldn’t take that thing off without grimacing before.”

Peter suggested that Tim try singing, which requires deep breathing. Tim easily joined in a chorus of “Our God Is an Awesome God,” then he stood up straight and cried out, “The pain is gone. I’m so glad you came over here today.”

Peter asked Tim if he’d like to join them for missionary work the next day. Tim agreed and spent 90 minutes talking to neighbors and sharing the story of his healing. “At one point we ran into an old friend of his, and Tim was excited to talk about the Lord with him, even offering to pray with him,” Peter says.

When they started the day’s missionary work, Tim’s abdominal binder lay in the same spot on his porch where he had dropped it the day before.