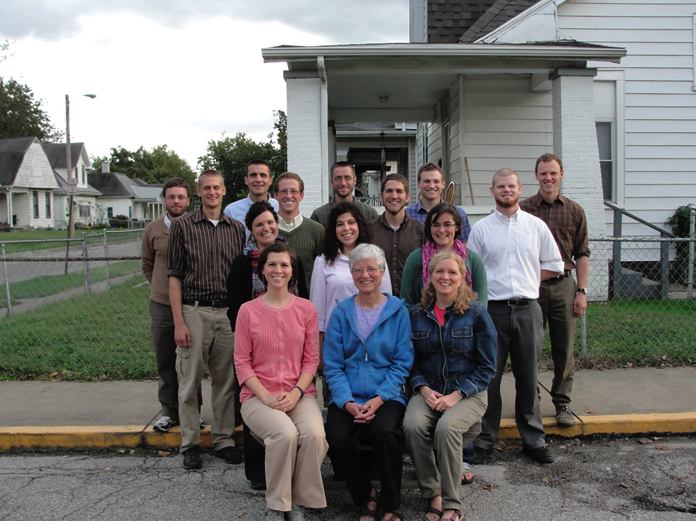 In August, George Kane moved to Evansville to join the Missionary Company. This article, which he wrote, originally appeared in the Oct. 25, 2013, edition of The Message, the weekly newspaper of the Catholic Diocese of Evansville, IN. It is reprinted here with permission.

I grew up in an Irish Catholic family of 10, in the Washington, D.C., area. When I was five, my family joined an ecumenical Christian community called the People of the Praise, which included many members of our home parish. As I grew up, many of my closest friends were a part of this community, and the combination of their positive influence and the Christ-centered life of the community has anchored my faith.

I moved to Evansville in August to begin a two-year stint as a missionary sponsored by the People of Praise. I’ve been inspired by Pope Francis’ exhortation that, “The Church must be taken into the streets,” and I want to spend the next two years of my life doing exactly that! The story of Alana is an example of the mission work we’re doing here.

It was just after two on a sunny Tuesday, and I was walking through the projects with Kaitlyn, a fellow missionary. I noticed that behind a nearby screen, a door was open. “How about this one?” I asked Kaitlyn, “Anything come to mind?”

As missionaries, we often share “words” with the people we meet. These words are the fruit of the daily hour of prayer we spend in preparation for our mission work. Sometimes we’ll be moved to tell one of the Jesus’ parables, or to share a piece of scripture that stood out to us. Other times, we’ll deliver a simple message of encouragement, teaching, or even correction.

Kaitlyn had a word, so we headed toward the door. Before I could even knock, the screen door flew open and a small, middle-aged woman in a khaki head sash beckoned, “Come on in!” Kaitlyn and I grinned and laughed a little as we sat down. We don’t always get such a warm welcome!  "God sent us out to talk to our neighbors today," I said, "and we felt moved to share a word with you…would you like to hear it?" Alana bounded to her bookshelf and pulled out a big crimson bible. "Of course!" she said, "What is it?"

Kaitlyn explained, "In Luke 9, Jesus feeds 5,000 people miraculously. When Jesus told the Apostles, 'You yourselves give them something to eat,' he was telling them to have courage, to trust in their ability as his disciples to overcome even the biggest logistical challenges. In Christ, you can have this same courage!"

When Kaitlyn finished, there was silence. Alana blinked back tears, and sighed deeply. A sad smile tugged at the edge of her mouth. Then, she began to tell us her story. In her 20’s, she had been imprisoned for attempted murder and drug abuse. Once released, she had reconciled with the woman whom she had shot, but remained estranged from her family.

Now, Alana was badly behind on her bills. A known drug dealer had been visiting, offering her “free” money, but she knew better. Alana had been struggling, calling out to God for direction, right when we arrived. Alana was amazed. God knew, He was really looking out for her! By the time we left, Alana’s smile was stretching from one end of the small apartment to the other.

Alana wasn’t the only one who experienced God working that day. I heard God speak His Word through Kaitlyn. I saw that word strike deeply into Alana. It made her weep, smile, and regain hope amidst crushing odds.

It might be tempting to think that Evansville is already Christian, has already heard the gospel, and doesn’t need missionaries. The 9mm gunshots that sound down the street, however, tell a different story. So does the rising rate of suicide in Indiana – which, according to the Centers for Disease Control, rose 50 percent since 1999. Clearly, violence and despair still reign in the lives of many.

We hope our conversation with Alana will be the beginning of a long and fruitful relationship. Please join me in praying for Alana, and for the rest of Evansville. In Christ, we cannot fail!