In Allendale, Community Grows With Camp and a Garden 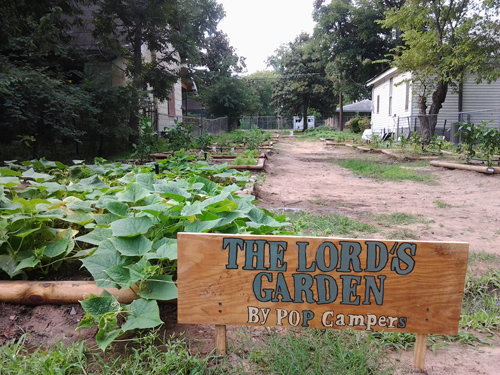 Ed Konczeski (Tampa) helped organize a community garden as part of the summer camp put on by Action volunteers.

Action volunteers wrapped up another summer of work in Shreveport’s Allendale neighborhood on August 2. The volunteers left in their wake a trail of happy children, grateful neighbors, repaired homes and a community garden flush with growing fruits and vegetables.

At a concluding barbecue, the children swarmed everywhere, playing football and jumping rope in the 98-degree heat. A few neighbors wandered down the block to check on the fruits and vegetables sprouting in the community garden. Gospel music blared from the speakers of a nearby car as girls performed a praise dance they had learned at summer camp. Nathan Barrett stood on a picnic table to address the group of neighbors, volunteers and Shreveport branch members, speaking of Pentecost and leading a prayer that God would pour out his Spirit on young and old alike.

Just before the barbecue, Patti Deakin drove around the neighborhood picking up older neighbors. One woman, whose granddaughter had attended camp, brought three containers of food, along with a chocolate sheet cake with frosted flowers on top and a message written in sugary lettering, “God Bless the POP.”

“This is my way to say thank you to all of you,” she told Patti. 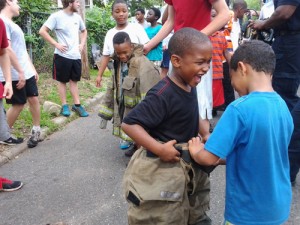 A boy tries on firefighting pants during a visit to camp made by Shreveport firefighters.

In total, sixty-four volunteers served in Allendale this summer. They spent their mornings running a camp for children and in the afternoon tackled projects for neighbors and the Christians in Mission team. A staff of 13 (including seven college students) kept the volunteers fed, housed and organized, with a big assist from seven more high school student interns who served as camp leaders, prepared meals and kept records.

Most days, more than 50 children came to camp, with an attendance high of 67, breaking last year’s record. The camp was organized into seven groups: three for boys, three for girls and a combined preschool group. Sam Mertz (South Bend) oversaw the boys’ groups. A chalkboard sign posted near the boys’ gathering place listed rules (among them: No Fighting) along with the consequence for using foul language—five push ups. The sign bore the boys’ signatures, indicating their acceptance of the terms. Colleen Murray oversaw the girls’ groups. She says one highlight came when a local grandmother proudly sang a version of the Lord’s Prayer that her granddaughters had taught her after learning it at camp. 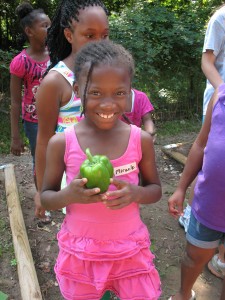 A girl shows off a green pepper that grew in the community garden.

The community garden was the brainchild of retiree Ed Konczeski (Tampa), a lifelong gardener with experience growing plants in clay soil. He planned the garden in the spring, working with Ben Reinhardt to collect landscape timbers (needed for raised beds) and 600 feet of pipe and other components for an irrigation system. The Tampa branch covered the costs of seeds, starter plants and supplies. A former neighbor offered his empty lot as the site for the garden and a Shreveport dentist loaned his rototiller.

Action intern Cassie Busekrus (Oahu) managed the project, assigning responsibility for plots among the various camp groups. Cassie says she enjoyed watching five-year-old campers gently carrying small paper cups filled with water to the green bean plants they were tending. Tomatoes and peppers arrived first, but now cantaloupes, strawberries, eggplants, lettuce, carrots, spinach, radishes, cucumbers, watermelon, squash, okra and green beans are coming in strong. “The kids were motivated to help, even outside of normal camp hours—especially after we referred to the weeds as ‘the bad guys,’” Cassie says. “I can’t believe we’ll have any trouble getting volunteers for picking.”

Joe Bulger (South Bend) supervised the work crews who sweated through the afternoons. “We worked on five repair projects for our neighbors. We installed sheetrock on a ceiling, did some interior and exterior painting, built a retaining wall, rebuilt a front porch and repaired a wheelchair ramp,” he says.

Volunteer Stephen Magill, 15, (northern Virginia) says a highlight came on a walk through the neighborhood with several other volunteers. “A man came up to us and told us that his sister had died of cancer and his son was in jail. He asked us to pray with him. He said he knew we were part of the People of Praise. It was really awesome!”