Allendale Neighbor Grateful to Be Alive 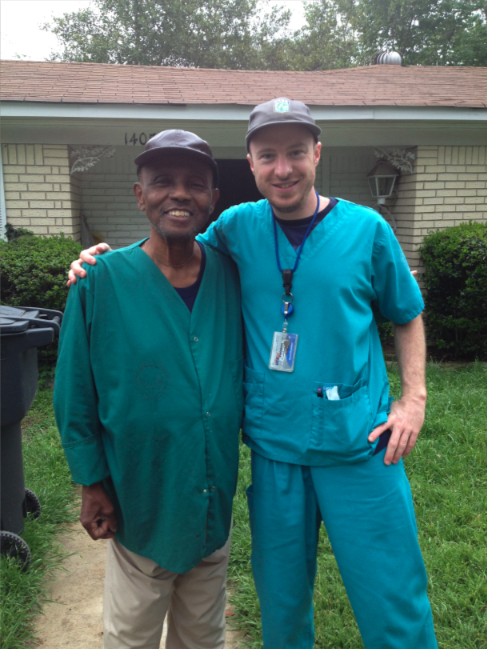 Ed home from the hospital, with nurse Thomas Duddy.

Ed Allison, 71, a good friend and neighbor of the Christians in Mission team in Shreveport's Allendale neighborhood, credits God and neighbor Pat Malone with saving his life on a recent Monday morning.

“Ed has been battling colon cancer for two years,” Pat explains. “He lives alone and I visit him about twice a week. Normally I don’t visit him on Mondays, but on March 25, as I was doing my household chores and praying for Ed, I had the sense that the Lord wanted me to check on him as soon as possible.”

After lunch Pat walked the two blocks to Ed’s. The doorbell wasn’t working. “I tried calling him, but his phone was out of order,” Pat says. “Normally I would have just come back later, but I had a sense I should try again to rouse him. I knocked on the door several times and then pounded on his window until he finally came to the door.”

Ed was weak and struggling. He was bleeding and couldn't get the bleeding stopped. He wasn’t thinking clearly. After they prayed, Ed decided to go to the hospital. Since Pat doesn’t drive, they used Pat’s phone to call a friend. “We got him to the hospital right away,” says Pat.

Ed’s bleeding was related to an inoperable tumor. At the hospital he received blood transfusions, and the bleeding eventually stopped. Hospital staff placed him in a palliative care unit. His caregivers were concerned that his tumor could rupture again, but 16 days later Ed returned home.

“I don’t know where Jesus is leading me,” Ed says. “I’m just holding his hand.”

Though his health is still frail, Ed says that he’s excited to see the kingdom of God breaking out in the neighborhood he’s called home for 40 years. “God’s work is going on here. I want to see this movement spread. I’m so grateful to your whole organization. I’m so glad you came. I’m grateful to God for saving my life by having Pat come over, find me and help get me to the hospital.”

Pat says he’s grateful to spend regular time with Ed. “He always wants to be prayed with for healing, and he likes nothing better than to hear me read Scripture aloud and then discuss it. Keep praying for this good brother in Christ.”