In Muncie, Brotherhood in the Outdoors 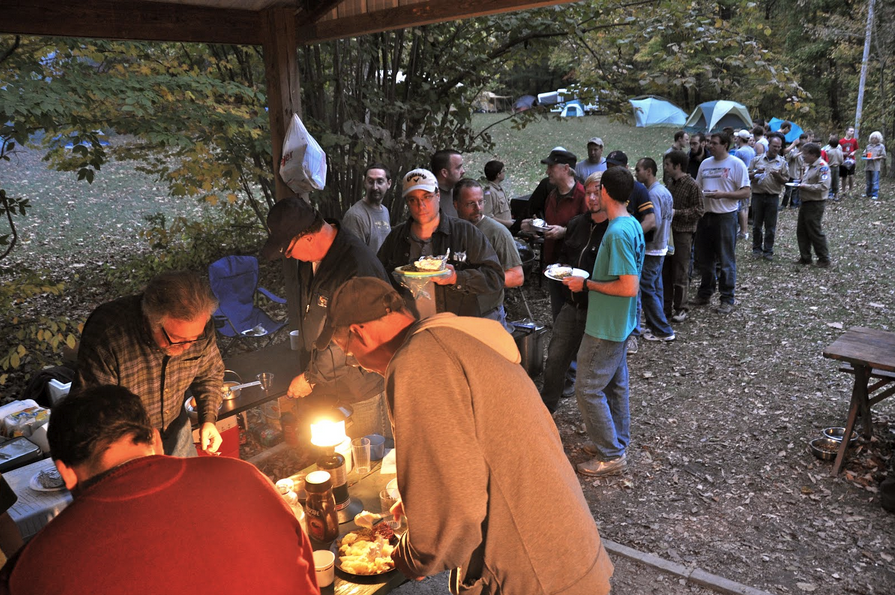 By Chris Meehan with reporting by Justin Walters

Eighty-five men and boys enjoyed a weekend of brotherhood and outdoor fun at the Muncie branch’s 33rd annual campout in mid-October. “What began in 1979 as a father-son campout pioneered by Ron Mixell has evolved into a yearly gathering for men and boys,” explains Muncie scoutmaster Peter Walters. (The gathering is organized by the branch’s boy scout troop.) This year, in addition to scouts and their dads, the men from the Indianapolis Christians in Mission team joined the campout, as well as several alumni of the troop.

They camped at the Mary Gray Bird Sanctuary, a 700-acre nature preserve about an hour southeast of Muncie. Campers enjoyed archery, boxing, hikes, marksmanship (with pellet guns), prayer, skits and personal testimonies. Part of Saturday was devoted to a skills competition among the four patrols in the boy scout troop, a chance to develop and display their abilities in archery, fire-building and orienteering.

Fourteen-year old Conner Davis said a highlight of his weekend was the annual re-telling of the Mary Gray ghost story, especially watching the faces of younger boys who were hearing the story for the first time. Nathan Osner (15) was grateful for the opportunity the weekend gave him to advance in the scouting program. “I love the fellowship, and the Christ-centered culture here at camp,” added Josh Shirey, who works in sales in Muncie and has a son, Noah, in the troop.

Brothers in the People of Praise such as Bill Bolka and Henry Peresie (both Muncie) and Terry Bomkamp (Rockford), as well as Peter’s sons Justin (Mission Division, Indianapolis) and Greg have assisted Peter in running the event for years. Recently a group of fathers and scout leaders—some in the People of Praise, some not—have coalesced into an informal men’s group that also make a large contribution of time and energy to the event. “We are unabashedly Christian in our approach to scouting,” Peter says.

Jim Schenkel, Muncie’s principal branch coordinator, spent Saturday with the men. He says, “Now that most of our own sons have grown, we’re happy to give scouting dads the chance to relax and have fun with their sons. For some of them, it’s their first introduction to who we are as a community. We hope to continue this tradition for many years.”